Why One Colorado County Took Its Sex-Offender List Offline

Getty Images
Montrose County, on Colorado's Western Slope, has pulled its sex-offender list offline, reportedly because of a recent court ruling in which U.S. District Court Judge Richard Matsch found that such registries constituted cruel and unusual punishment in the case of three plaintiffs. The action was taken despite the fact that the ruling is specific to the complainants in question, rather than everyone on the roster, and Colorado Attorney General Cynthia Coffman has announced her intention to appeal.

The news comes from the Montrose Daily Press, which reports that county sheriff Rick Dunlap made the announcement at a GOP central committee meeting last week. He's quoted as saying that the decision was made "out of precaution" and added that he fears it's a "matter of time" before his hand would have been forced. At this writing, Dunlap hasn't responded to multiple interview requests from Westword.

The sex-offender registry page on Montrose's website includes none of the photos or information common to such online resources. Instead, the page is dominated by text. "The Montrose Police Department maintains the sex offender registry for offenders living within the city limits," the page notes. "The registry is available to the public for a minimal fee. To obtain a copy of the list, you can contact the Montrose Police Department in person at 434 S. First St., Monday through Thursday, from 7 a.m. to 6 p.m."

The site adds that "sex offender information for all Colorado jurisdictions can be viewed on the Colorado Bureau of Investigation Convicted Sex Offender Site," which continues to be accessible.

By current Colorado law, as we've reported, sex offenders must register with law enforcement on an annual basis, as well as each time they relocate. In addition, those convicted of child sex crimes are required to give authorities all of their email addresses and chat-room identities — and much of this information is available to any web surfer via the Colorado Bureau of Investigation's website. 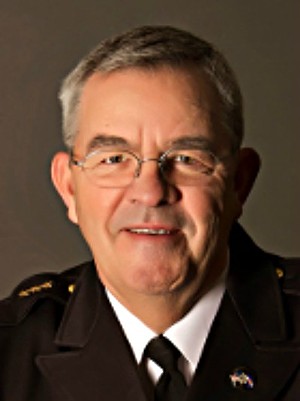 Montrose Sheriff Rick Dunlap announced the decision at a Republican Party meeting.
co.montrose.co.us
Critics have long argued that this system is mainly about afflicting "retribution or additional punishment," in a phrase quoted by Matsch. Likewise, the plaintiffs represented by Boulder attorney Alison Ruttenberg — David Millard, Eugene Knight and Arturo Vega — say they've been subjected to widespread community ostracism and more, with no way to move forward. Vega, for instance, has a single offense on his record, dating from when he was just thirteen. But even though he hasn't committed another sex crime since then, he's been rejected in two attempts to petition off the registry.

Matsch's ruling only affects Millard, Knight and Vega, but the language he used certainly suggests the potential for wider utilization. "There is a rational relationship between the registration requirements and the legislative purpose of giving members of the public the opportunity to protect themselves and their children from sex offenses," he wrote. "But what the plaintiffs have shown is that the public has been given, commonly exercises, and has exercised against these plaintiffs the power to inflict punishments beyond those imposed through the courts, and to do so arbitrarily and with no notice, no procedural protections and no limitations or parameters on their actions other than the potential for prosecution if their actions would be a crime."

He concluded: "The fear that pervades the public reaction to sex offenses — particularly as to children — generates reactions that are cruel and in disregard of any objective assessment of the individual’s actual proclivity to commit new sex offenses. The failure to make any individual assessment is a fundamental flaw in the system."

The possibility that Matsch's opinion could be applied statewide was no doubt a factor in AG Coffman's appeal announcement. "As Attorney General, protecting victims is one of the most critically important parts of my job,” she maintained in a prepared statement. "Colorado, its forty-nine sister states, and the federal government all have sex offender registry laws in place to inform the public and protect them from sexual offenders who have been found guilty of sexual crimes, including heinous crimes against children. Survivors of sexual assault are forever impacted by the trauma they have experienced, and we must never lose sight of the responsibility we have to prevent the victimization of more innocent people."

Ruttenberg objects to the implication in Coffman's comments that each Colorado sex offender is, in her words, "a violent repeat molester who's going to come get their children, which isn't true in the vast majority of cases. That's why the men and women on the registry experience so much harassment and vigilante activism against them."

Nonetheless, Ruttenberg acknowledges that additional court victories won't be easy — and given how long the appeals process could take, Montrose's move to immediately pull down the registry qualifies as a surprise. Then again, it's difficult to entirely remove something from the worldwide web once it's been published. Not only do details about Montrose sex offenders linger on the state registry linked above, but they can also be found at Homefacts.com, which spotlights photos and other data for 65 registered SOs in the county, and Offenderradar.com, repository of similar material for 62 individuals.

For better or worse, the Internet is forever.