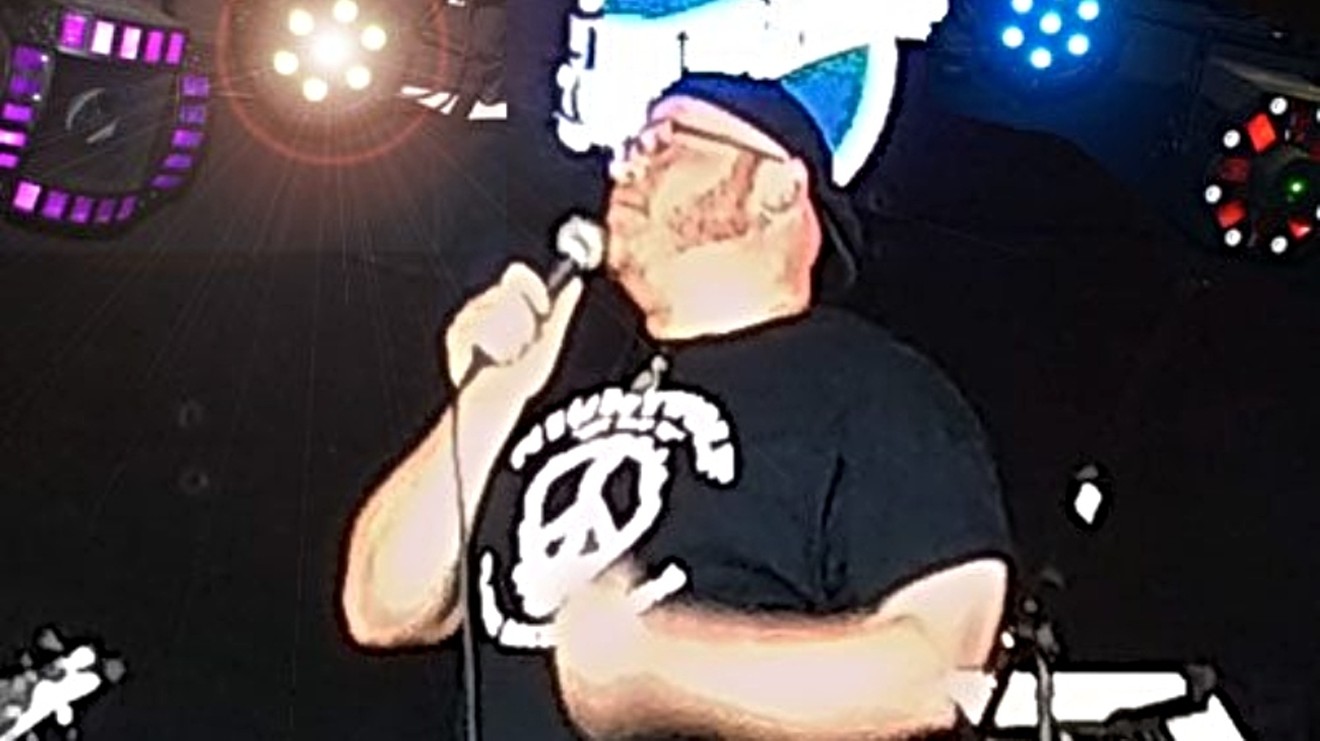 A photo of Nightwolf lead singer Ryan McPherson from the fundraising page set up after his injury. bikerdown.com
Denver wasn't the only metro community with a fatal outburst of violence this weekend. Late Saturday, July 11, around the same time the third local juvenile in four days became a homicide victim following a Denver house party, 43-year-old William Henderson was killed and three others were hurt outside Jake's Roadhouse at 5980 North Lamar Street in Arvada, during what police characterize as a dispute between motorcycle groups that erupted into gunfire.

Among those injured was Ryan McPherson, lead singer and acoustic guitarist for the classic-rock band Nightwolf, which was playing at the watering hole that evening.

McPherson wasn't shot, but bandmates who took part in a fundraiser at Jake's last night, July 12, say that he suffered a head injury that will require a long recovery.

On June 30, Governor Jared Polis ordered bars and nightclubs across Colorado to temporarily close in an attempt to prevent COVID-19 spikes of the sort being experienced by Florida and many other states. But bars that serve food, as Jake's Roadhouse does, can be exempt from this edict as long as they follow strict guidelines; they can also host live music as long as they observe other rules and hold down capacity.

Jefferson County Public Health spokesperson Ashley Server confirms that Jake's is "permitted to operate so long as they follow all restaurant guidance in the state’s public health order."

She adds: "We can’t speak to events that occurred over the weekend, but we are always concerned about any scenario in which people are gathered together and are not able to maintain six-foot distancing."


Nightwolf is a four piece group of seasoned musicians who play the music from this era as if they were there…and they were!

Since 1986 Nightwolf engages the audience, encourages participation and always gets the crowd dancing and hollerin’! We are the ultimate party dance band in Colorado.

The band was on the bill Saturday night when what investigators describe as a fight between members of the Hells Angels and the Mongols that started in the Jake's parking lot triggered dozens of shots that bystanders initially mistook for fireworks.

Members of the Arvada Police Department responded to calls for assistance at 10:22 p.m., and in a Facebook post shared the following day, the APD identified Henderson and confirmed that three other people remained hospitalized. The item adds: "Jake's Roadhouse not involved, people from the Roadhouse actually tried to help a victim. That good Samaritan is facing life-threatening injuries. The bar/restaurant patrons called and gave fast information to police so we could get help for the injured."

Shorty thereafter, Nightwolf drummer John Akai offered details about McPherson's condition at the band's Facebook address. "First of all, although it looked like it last night and the paramedics though so too, Ryan was not actually shot," Akai wrote. "He was struck on the back of his head and it caused a severe head trauma as well as other injuries from falling. He is hospitalized and in very serious condition, but stable as of now. We are all praying for him and hoping for a full recovery, but it is too early to know how things will develop."

Akai also said that the other members of Nightwolf would be joining with "several musician friends" for a fundraiser that night at Jake's, with 100 percent of the proceeds earmarked to help defray medical expenses for McPherson and his family.

The fundraiser's online home is the Biker Down website, where donations are continuing to accrue, along with comments from those who know and love McPherson. One person wrote, "Ryan is my friend and I am so pissed right now I can’t see straight. I hope this fund finds you on the other side of this bullshit and you get to enjoy the rest of your life." Another added, "You are loved, and that is the best medicine of all."

Anyone with information about the shooting can contact Metro Denver Crime Stoppers at 720-913-7867.

This post has been updated to include comments from a spokesperson for Jefferson County Public Health.
KEEP WESTWORD FREE... Since we started Westword, it has been defined as the free, independent voice of Denver, and we'd like to keep it that way. With local media under siege, it's more important than ever for us to rally support behind funding our local journalism. You can help by participating in our "I Support" program, allowing us to keep offering readers access to our incisive coverage of local news, food and culture with no paywalls.
Make a one-time donation today for as little as $1.