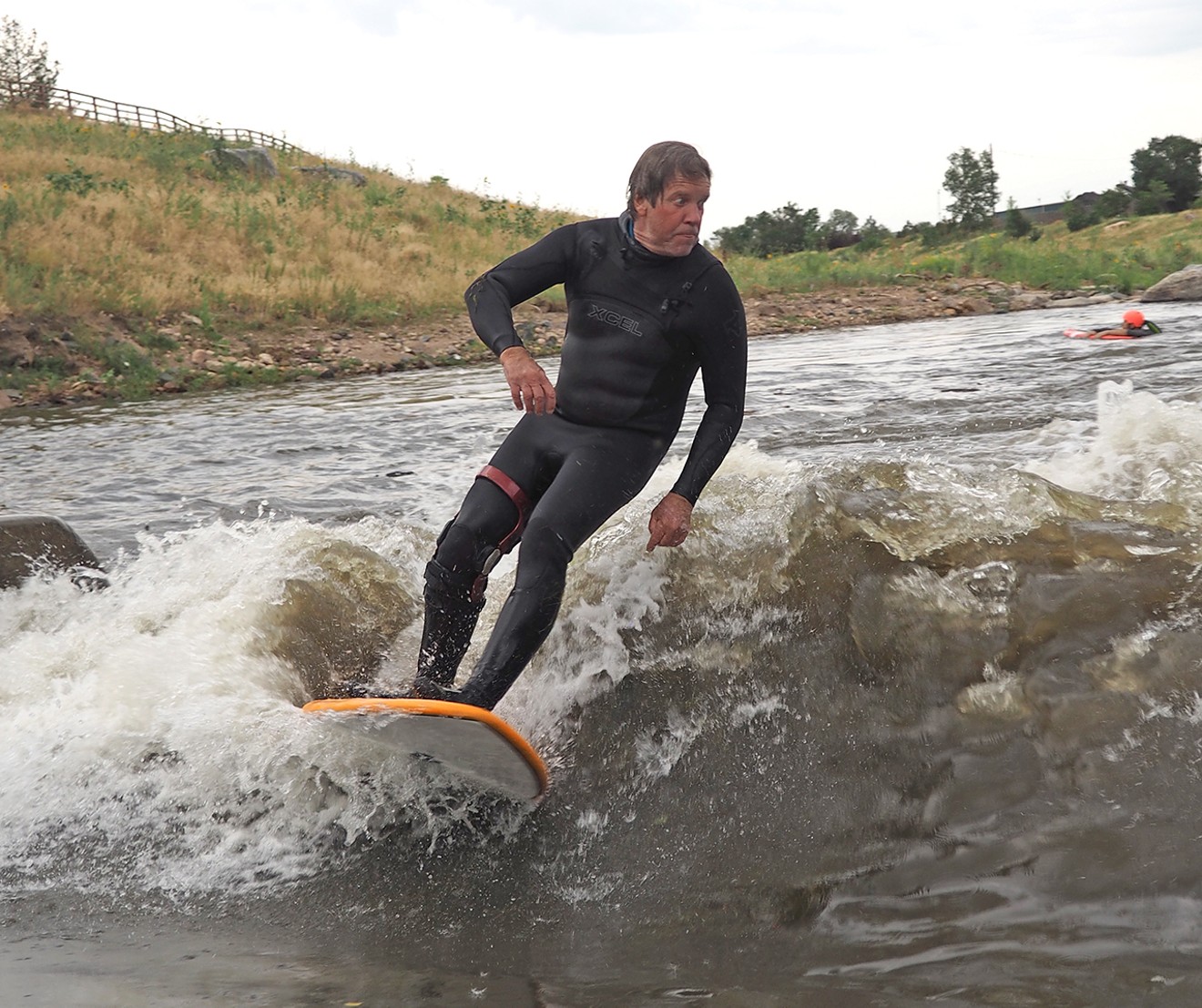 CRSA president David Riordon on the river. Jay Vollmar
People who use the South Platte River for recreation, particularly river surfers, are hoping the next iteration of the Colorado Water Plan will include stronger language about the importance of recreation on the river.

An updated version of the plan originally developed in 2015 during the John Hickenlooper administration will take effect in 2023, and the public can currently weigh in on the Colorado Department of Natural Resources draft. David Riordon, an avid river surfer in Denver, says he was pleasantly surprised that the draft indicated a positive approach to recreation, but hopes there will be more specifics regarding the use of the South Platte in the final document.

While Riordon recognizes that the plan must tackle big issues across the state, he points out that river surfers keep a close eye on the South Platte's status in metro Denver when they spend time on the waves at River Run Park in Englewood. “We see what comes by us or what doesn't come by us,” Riordon says. “That could be water. It could be people. It could be fish, it could be trash. It could be plants. All kinds of stuff comes by us.”

Currently, river surfers gauge several factors, such as the discharge from Chatfield Reservoir and the City of Englewood, to see if the water is running at enough cubic feet per second to surf, generally 180 cfs. Riordon thinks the flow of the South Platte should be controlled the way it is on the Arkansas River, where a voluntary flow management program ensures that the Arkansas will be high enough for recreation during summer months, including rafting and fishing.

“My thought is that we need to do something like that for the South Platte for three main reasons,” Riordon says. “Safety, the environment, and then recreation, which is the engagement of the people with the water.”

According to Drew Peternell, director of the Colorado Water Project for Trout Unlimited, which advocates for the health of the state’s rivers and streams, the Arkansas River program benefits both the rafting and fishing industries without any adverse impacts on consumptive water users because of the unique setup of the river, which has reservoirs at the top that receive water from the Continental Divide and a reservoir at the bottom in Pueblo that collects the water again. That system allows the flow to be higher during summer months without losing necessary water.

Although the agreement guiding the Arkansas River program is between the Colorado DNR, Colorado Parks and Wildlife, Trout Unlimited, the Southeastern Colorado Water Conservancy District and the Arkansas River Outfitters Association, the U.S. Bureau of Reclamation actually operates it, measuring the reservoirs and controlling the outlet gates to ensure a constant flow of at least 700 cfs from July 1 to August 15. It also maintains a 250 cfs level during fall and winter months to improve conditions for trout.

The program is renewed every five years, with the most recent renewal in 2021.

To create something similar on the South Platte, Riordon, who's president of the Colorado River Surfers Association, hopes to connect with other stakeholders to apply for a grant from the Metro Basin Roundtable to determine if the idea would be feasible.

“We would want to go ahead and have both drinking water and recreation water," he says. "The reality is the ups and downs of flows are something that we could work with jointly and together, but it would take effort.” 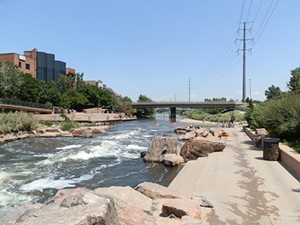 People want to recreate on the South Platte River.
Walk Ride Colorado Facebook page
Although creating a complete plan would take time, Riordon thinks that an easy improvement would be for any member of the public, including river surfers, to be able to see releases from Chatfield and river flow on the South Platte live; other locations put the plan for the day's flow on their websites, he notes. The only people who currently get that immediate information for the South Platte are those selected for a listserv operated by the U.S. Army Corps of Engineers, which has declined to add river surfers, he says.

“I want to have all the river surfers out there, because I'm the type of guy who wants everybody in the water,” he explains. “I want everybody sharing. I want everybody enjoying it. River Run Park was built with taxpayer money, right? And so it needs to be enjoyed by everybody.”

Sean Chambers, chair of the South Platte Basin Roundtable and director of Water & Sewer in Greeley, helped create the Basin Implementation Plan for the South Platte, finalized in 2022. Each of Colorado’s basins updated their plans in advance of the Colorado Water Plan revision process in order to assess the needs and priorities of the waterways.

“It provides the framework for analysis on how the water is used across the South Platte Basin, and then touches on recreation and environmental utilization of water and additionally talks about the impacts of climate and other implications upon the planning work,” Chambers says of the updated Basin Implementation Plan.

The new iteration includes goals for protecting and enhancing both environmental and recreational attributes of the South Platte. Compared to the first version, completed before the original 2015 Colorado Water Plan, it takes a stronger stance on social justice and ensuring equitable access to recreation on the river, he continues.

“There's a much more intentional effort to see the South Platte River, and the associated recreational landscapes and trail corridors, as an economic asset that can really enhance both quality of life and kind of anchor economies around the river,” Chambers adds.

He notes that he’s seen a change along the Poudre River, a tributary of the South Platte in Greeley, where its use went from agricultural to an opportunity for communities and businesses to cater to people interested in experiencing the atmosphere of the river.

The 2015 plan paid attention to fishing, whitewater boating, municipal recreation and state wildlife areas, particularly in terms of the cleanup and preservation of the riparian habitat along the river. “But it wasn't really spelled out with that kind of clarity, and it wasn't taking into mind any of the kinds of social justice criteria that we now have in place to ensure equity amongst neighborhoods and equity in access,” Chambers says. “That's the real shift that I see between the two plans, is just that intentional incorporation of recreation and some clearly identified outcomes that we want to see in the recreation space.”

But there's a challenge: more demand for water than supply.

“Trying to ensure these environmental and recreational values are honored is tough,” Peternell points out. “It’s something we work on every day.” Colorado Trout Unlimited will submit official comments on the plan; he says the draft does a good job of recognizing environmental and recreational values, but could include firmer targets and tools for honoring those values.

Riordon plans to comment, too, and ask whether tools be put in place to ensure that certain recreational goals come to fruition.

“We can do better,” he says. “We can embrace that river even more.”

The public can comment through the Colorado Water Conservation Board until September 30.
KEEP WESTWORD FREE... Since we started Westword, it has been defined as the free, independent voice of Denver, and we'd like to keep it that way. With local media under siege, it's more important than ever for us to rally support behind funding our local journalism. You can help by participating in our "I Support" program, allowing us to keep offering readers access to our incisive coverage of local news, food and culture with no paywalls.
Make a one-time donation today for as little as $1.