Trinity UMC: A Beacon for Change in the Denver Community

The room quiets as he ascends to the podium. Surveying the crowd, he narrates some of his father’s experiences working as an engineer in a segregated workplace in North Carolina. “Though my daddy was exposed to this brutal environment each day, he never let us think we were limited by the color of our skin,” Brown says. “He returned each night to tuck us into bed, and we grew up believing we could be anything we dreamt to be.”

Trinity is one of the oldest churches in Denver, but its mission is anything but dated. With Brown at its helm, the church at 1820 Broadway has become a beacon for social justice in both the United Methodist Church and the Denver community. Brown served as a faith leader in the Black Lives Matter protests and continues to challenge his predominantly white congregation to fight racism.

“From the beginning, I knew that God wanted me to uniquely serve in cross-racial settings,” Brown recalls. “That call happened in 1992. It’s very rare for Black people to lead white churches, and is to me one of the reasons that as Christians, we’re complicit in the race problem.”

Pastor Ken Brown has been building bridges.
Pastor Ken Brown
Brown became a second-career pastor after working as a marketing director in real estate development, attracted to preaching since his childhood in the Baptist faith. After ten years preaching in Broward County, Florida, Brown was recruited to be the senior pastor for Broomfield United Methodist Church.

“I’ve discovered in Broomfield and Denver the Methodist church is more progressive, and my calling to serve white churches has been overwhelmingly embraced,” Brown says. “When I was in Florida, I wasn’t offered an opportunity to be the senior pastor of a white church, and in Colorado, I was.”

Brown recently entered his fourth decade of ministry; he joined Trinity three years ago. His sermons draw upon scripture to link the universality of the human condition to societal problems, which empowers congregations toward positive actions — and transcends denominations.

“He’s extremely humble, yet confident,” says Kolby Morris-Dahary, a student rabbi who has worked with Brown on interfaith spirituality initiatives. “He reaches out to parts of ourselves that are yearning to show up in our authenticity.”

Brown weaves personal experiences of race and class into his sermons to inspire church members to create change. “As a pastor, I don’t believe I have a pass on not being political — most things in life are,” Brown says. “If the Bible says ‘Thou shall not kill,’ then of course I’m going to preach about it.”

After the murder of George Floyd in May 2020 at the hands of Minneapolis police, Brown and Deb Meyer, Trinity’s director of servant ministry, organized an anti-racist allyship group for church members interested in supporting the BLM movement. “The church needs to be a social change leader,” Brown says. “We have to recognize the church’s complicity in our racial divide. Eleven on Sunday is the most racially segregated hour of the week.”

Since then, Brown and Meyer have vastly expanded the church’s role in social justice organizing. “We started working on this idea of Dinner and Dialogue, brought to us by Alphonse Keasley at CU Boulder,” Meyer says. “The idea was, as facilitators in anti-racist allyship, we would invite specific people to this to create a very diverse group of people that would allow folks to engage with [people] of different identities.”

The series saw over eighty people of differing racial, ethnic, generational, gender, religious and sexual identities meeting for five sessions every other week. Each session included facilitators trained to help people connect with each other. “Our priority was to create a safe space and share a good meal — which is a great way to enjoy conversation,” Meyer says.

Brown and Meyer hope the successful pilot serves as a model for other community organizations seeking to spark complex conversations. “What we’ve identified is a mechanism to build relationships, and we’re planning to sponsor a series of Dinner and Dialogues across the metro area,” Meyer says. “We’re involved in supporting a series of conversations with churches, nonprofit organizations and businesses to involve different people and facilitating relationship-building across differences: race, ethnicity, sexuality, gender, socio-economic (status), political and age to cultivate our capacity to have these conversations around race.”

The impact of Trinity’s anti-racist efforts extends well beyond that. John Common, founder and CEO of Intelligent Demand, a global revenue growth agency headquartered in Denver, began implementing diversity, equity and inclusion initiatives after participating in the allyship group. “You can’t sit on the sidelines if you’re a person of conscience,” Common says. “A friend invited me to join Trinity’s anti-racism group — the same one that Ken was involved in. The group offered a helpful, safe space to discuss topics, learn from each other and widen our perspectives. I joined the group after realizing that there are three types of folks when it comes to racial and social justice: actively racist, passive — which essentially supports the current state — and actively anti-racist.

“I think that being passive actually does the most harm, which seems counterintuitive," Common continues. "But when you think about it, it makes a lot of sense. Finally seeing that seals the deal — you start to get it. But what happens next is you realize that systemic racism (or other forms of injustice) is not a simple or easy problem to fix; it’s overwhelming, in fact. But what I can do is influence the spaces where I live and work — my friends, family, company and music community.”

Common created a strategy to cultivate inclusion at Intelligent Demand and is now beginning the second phase of DEI planning, which includes soliciting employee feedback to identify areas of strength and improvement. With the pandemic shutting down the company’s offices, Intelligent Demand opened positions to applicants nationwide, which has diversified the company’s talent pipeline.

“We have a much more diverse talent pool flowing into the company, and it’s great. We're intentionally opening up the talent pipeline, but that’s just the first step. You have to actually be a culture and workplace that people not only want to join, but also want to stay. That means making sure that the compensation, policies, culture, management, the entire team is fair and inclusive and creates a sense of belonging. It’s not about checking a box for diversity in your recruiting; it’s about the end-to-end experience.”

As CEO of Intelligent Demand, Common now consults with a diversity, equity and inclusion board that counts Brown as one of its advisors. “A member of our DEI board of advisors reminded us the other day that this work is about fumbling forward. That’s so true. We can’t let perfect be the enemy of better,” Common says. “It’s complex and humbling work, but it’s also rewarding, because the truth is, even though our influence might be small, you really can make a difference in the areas where you have influence.” 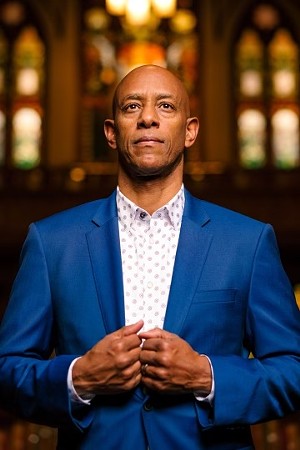 Pastor Ken Brown has been a minister for thirty years.
Courtesy Ken Brown

The anti-racist allyship group inspired other projects, too. Members created a Housing for All alliance to challenge housing discrimination and homelessness, as well as an environmental justice group to ensure safe and clean neighborhoods for all Denver residents.

As the pandemic winds down, Brown believes Trinity can continue to act as a force for social change. “What I think is unique about the church is that now we have a chance to change the world,” he says. “[Common] decided to incorporate diversity, equity and inclusion into his company because of his involvement in Trinity’s anti-racist allyship. His efforts were a genius way for him to challenge his organization, and he’s been super-smart about growing his organization to be more purposeful.”

But Brown's influence extends beyond the project at Intelligent Demand. “His ability to speak to people’s hearts and charge people toward actions transcends words,” says Morris-Dahary.

“The verdict of George Floyd’s case was a nod to justice,” Brown concludes. “It’s not a final chapter in erasing racism. Now we need to shift to building bridges between people.”
KEEP WESTWORD FREE... Since we started Westword, it has been defined as the free, independent voice of Denver, and we'd like to keep it that way. With local media under siege, it's more important than ever for us to rally support behind funding our local journalism. You can help by participating in our "I Support" program, allowing us to keep offering readers access to our incisive coverage of local news, food and culture with no paywalls.
Make a one-time donation today for as little as $1.