Victor Mitchell on Lies, Dark Money and What's Wrong With Our Election System 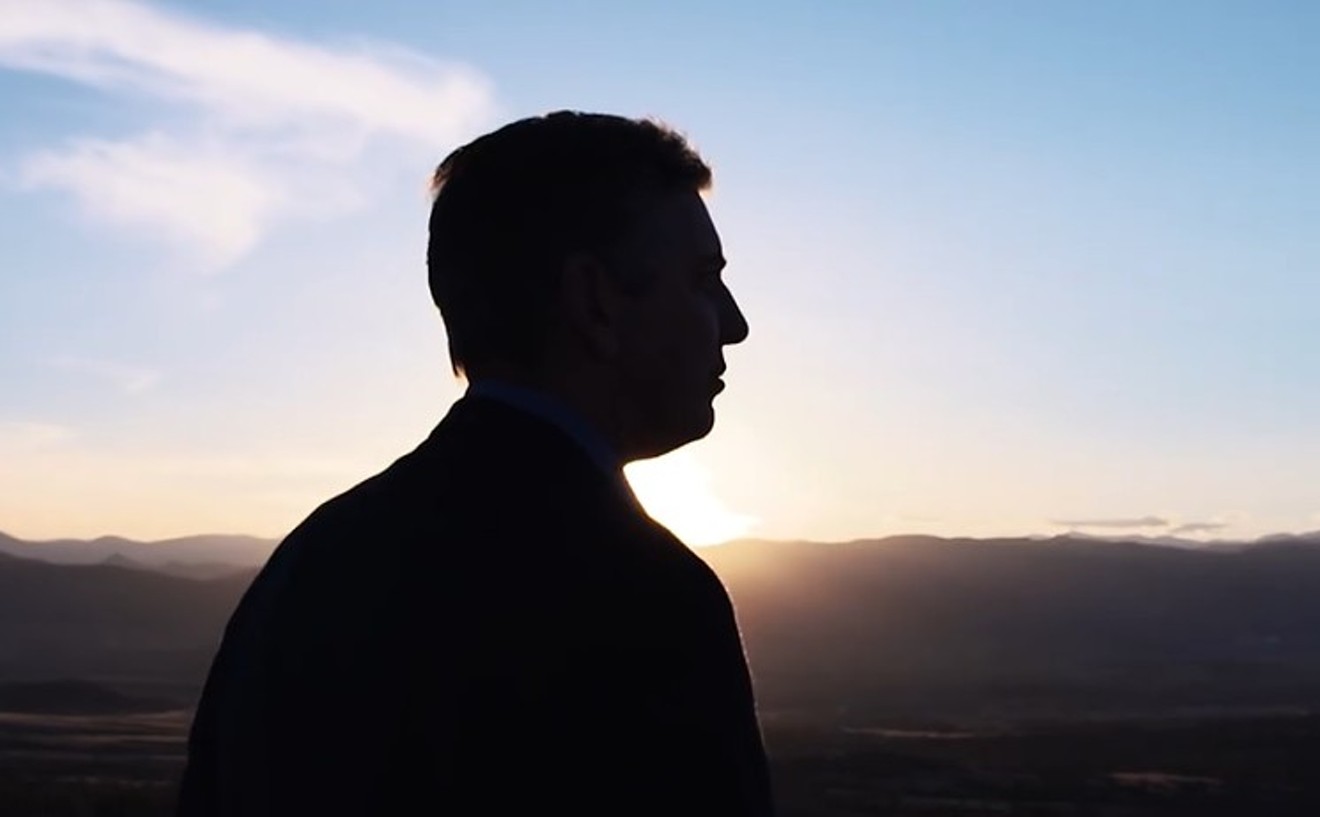 Victor Mitchell in a screen capture from one of his campaign commercials. File photo
Editor's note: This is the second in a series of interviews with former 2018 Colorado gubernatorial primary contenders. Click to read our previous offering, "Donna Lynne: My Guv Run Showed Why We Need Campaign Finance Reform."

Entrepreneur and former state legislator Victor Mitchell is proud of his campaign for Colorado governor in 2018 and treasures many of his experiences prior to finishing second behind Treasurer Walker Stapleton in the June Republican primary. But he blasts what he characterizes as a shadowy process that rewards liars and places one obstacle after another in front of outsiders interested in shaking up the status quo. Thanks to these factors and more, he says he's swearing off a future run for office.

"Let's face it: Our government is completely and totally dysfunctional," he says during a Westword interview conducted prior to his call yesterday, August 22, for President Donald Trump to resign "given the convictions and guilty pleas" of former Trump associates Paul Manafort and Michael Cohen. "We elect politicians and very few leaders."

According to results compiled by the Colorado Secretary of State's office, Stapleton topped the Republican primary field with 47.67 percent of the vote as compared to Mitchell's 30.13 percent, followed by former Parker mayor Greg Lopez with 13.20 percent and businessman (and nephew of Mitt Romney) Doug Robinson, with 9.01 percent.

Mitchell actually outspent Stapleton during the primary. Figures obtained by the Colorado Independent estimate Stapleton's campaign ponied up $1,946,105, supplemented by $1,689,608.04 from outside political-action committees. For his part, Mitchell, whose race was largely self-financed, spent $4,985,946.30 but accepted no PAC cash. Because he was a public unknown prior to launching his gubernatorial bid, however, he was unable to overcome Stapleton, a member of the Bush political dynasty who'd already won statewide office. 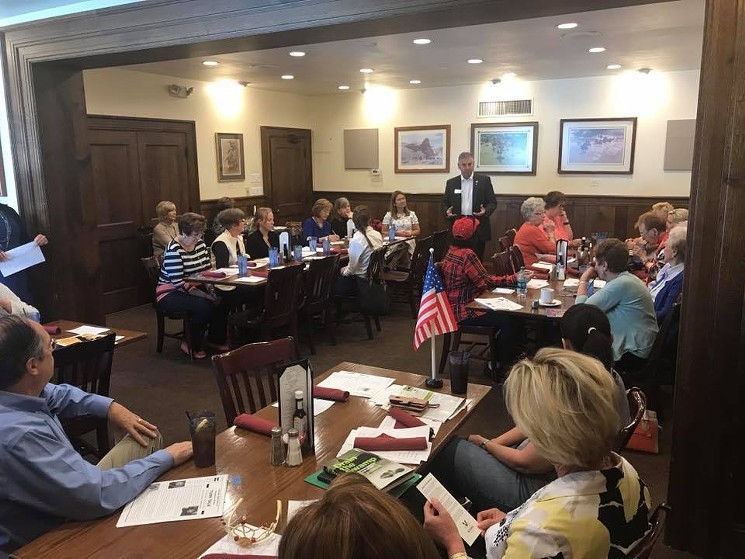 Victor Mitchell during a campaign appearance in Greeley earlier this year.
Facebook
"There were many highs during the campaign," Mitchell allows. "We won over 150,000 votes — more votes than any other losing candidate on the Democrat or Republican side of any race [see update below]. We also made tens of thousands of friends and supporters, and we've received something like 3,000 comments, words of encouragement, personal notes and cards since the primary expressing how sad people were that we didn't win. I was deeply touched by that. I was also the only candidate who refused special-interest money and offered bold plans to reform many of our broken bureaucracies. It was not meant to be and I was extraordinarily disappointed, but I gave it my best."

When asked about campaign lows, Mitchell says, "My opponent [Stapleton] spent over $1 million of dark money making up outright lies and smears — and when we went to the media and said, 'These are lies,' they wouldn't take the lies down."

One example: In one oft-seen commercial, Stapleton asserted that "I was the only treasurer in the country with the courage to support Donald Trump's tax cuts." This was an easily provable untruth, which is why the spot failed a 9News truth test. But while station anchor Kyle Clark castigated Stapleton in a pointed commentary, he told Westword that the ads couldn't be yanked from the airwaves because "local television stations are constrained by FCC regulations regarding political advertising."

To Mitchell, this explanation qualifies as an empty excuse.

"I think the media should be held responsible," he maintains. "They're using the public airwaves, and when something is incontrovertibly false, they should have a duty to take those ads down. We gave them undeniable evidence that these ads were false over and over again. They said I supported over twenty tax increases, and I never supported a tax increase in my life. They said I supported Obamacare, and I was the largest, loudest advocate for getting us out of the Unaffordable Care Act. They said I was a tax-and-spend liberal, and I've been a conservative since I was eighteen years old. I was the only one in the race to have a conservative voting record. There was as much truth to what they were saying as if they had called me a serial killer." 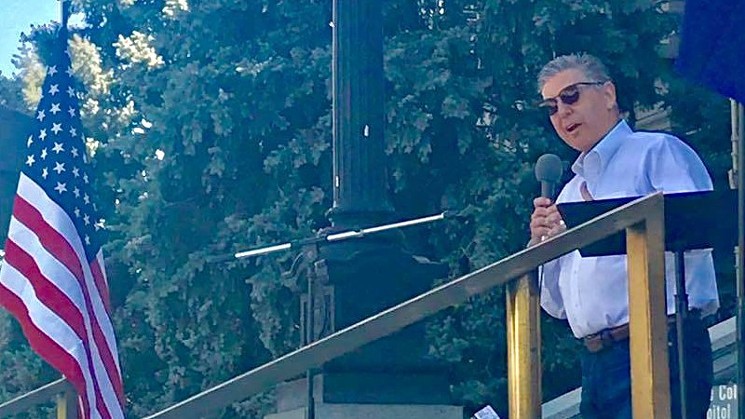 Victor Mitchell speaking at the State Capitol.
Facebook
Yet the ads kept running, and Mitchell asserts that "with the TV and radio stations, it was pure greed. My opponent's campaign spent a million dollars during the last three weeks of the campaign lying about me, and for someone with zero name identification, it was too much. That we ended up with 30 percent of the electorate was a tremendous accomplishment, but we just fell short."

Despite his criticism of Stapleton's tactics, Mitchell now supports his candidacy. In his words, "I want nothing but the best for Walker Stapleton. I want him to win. I think he would be much better for the state than having a socialist, [Democratic gubernatorial nominee] Jared Polis, as governor. Walker won the election, and this was never about me. This was about doing what's best for the state. So if he wants me to campaign for him, I'd be happy to do it. And if he'd like me to advise him or stay on the sidelines, he has my full and unconditional support."

Still, Mitchell believes "it's ridiculous that someone can win strictly on name identification — just by saying 'I'm anti-illegal immigrant and anti-sanctuary city and I'm in the Bush family and that's all it takes for me to be elected.'"

Likewise, Mitchell rails against "the unlimited dark money polluting our whole political process on both the Democrat and the Republican side. It's flat-out disgusting. We don't know who gave the millions to my opponent who won. He'll never disclose it, but those ads were strategically aimed at targeted communities against me."

A portrait of Victor Mitchell.
File photo
Candidates are forbidden from coordinating with outside organizations, but Mitchell argues that the ads created by those that helped Stapleton "were all overlapping, all on message to what my opponent wanted to say. So we need to get rid of all this dark money. And it's not about First Amendment rights, since 99.99 percent of the population can't afford to fund these dark-money PACs. They're being funded by very wealthy donor groups and corporate interests, and they're the kind of thing that's ultimately going to ruin our democracy."

Hence his decision to forgo future go-rounds as a candidate.

"If we're going to solve the big problems of our day, the solutions are going to have to come from places like nonprofits," he says. "That's why we're working on opening Colorado's first rural health clinic that won't accept any form of insurance. We're modeling it on the health wagon in southern Virginia that my wife and I have been involved with. It will offer rural health services, including mental health services, for very affordable rates, and we're going to open it up in one of the nine counties that were crazy enough to support me" — Dolores, San Juan, Lake, Park, Chaffee, Fremont, Costilla, Cheyenne and Phillips.

Until then, Mitchell continues, "I want to thank the good people of Colorado and tell them that I love them dearly, and that I hope to make a meaningful and lasting impact on the state in the years to come. But I'll be doing it from outside of government rather than inside."

Update: After the publication of this post, the Colorado Secretary of State's office reached out to note that Victor Mitchell's claim of earning "more votes than any other losing candidate on the Democrat or Republican side of any race" is inaccurate. Mitchell notched 151,000, while Democratic gubernatorial hopeful Cary Kennedy racked up 157,000, state treasurer candidates Justin Everett and Bernard Douthit collected 167,000 and 175,000, respectively, and attorney general hopeful Joe Salazar fell short despite being chosen on 296,000 ballots.
KEEP WESTWORD FREE... Since we started Westword, it has been defined as the free, independent voice of Denver, and we'd like to keep it that way. With local media under siege, it's more important than ever for us to rally support behind funding our local journalism. You can help by participating in our "I Support" program, allowing us to keep offering readers access to our incisive coverage of local news, food and culture with no paywalls.
Make a one-time donation today for as little as $1.