What Would It Take for RTD to Offer Income-Based Transit Passes? 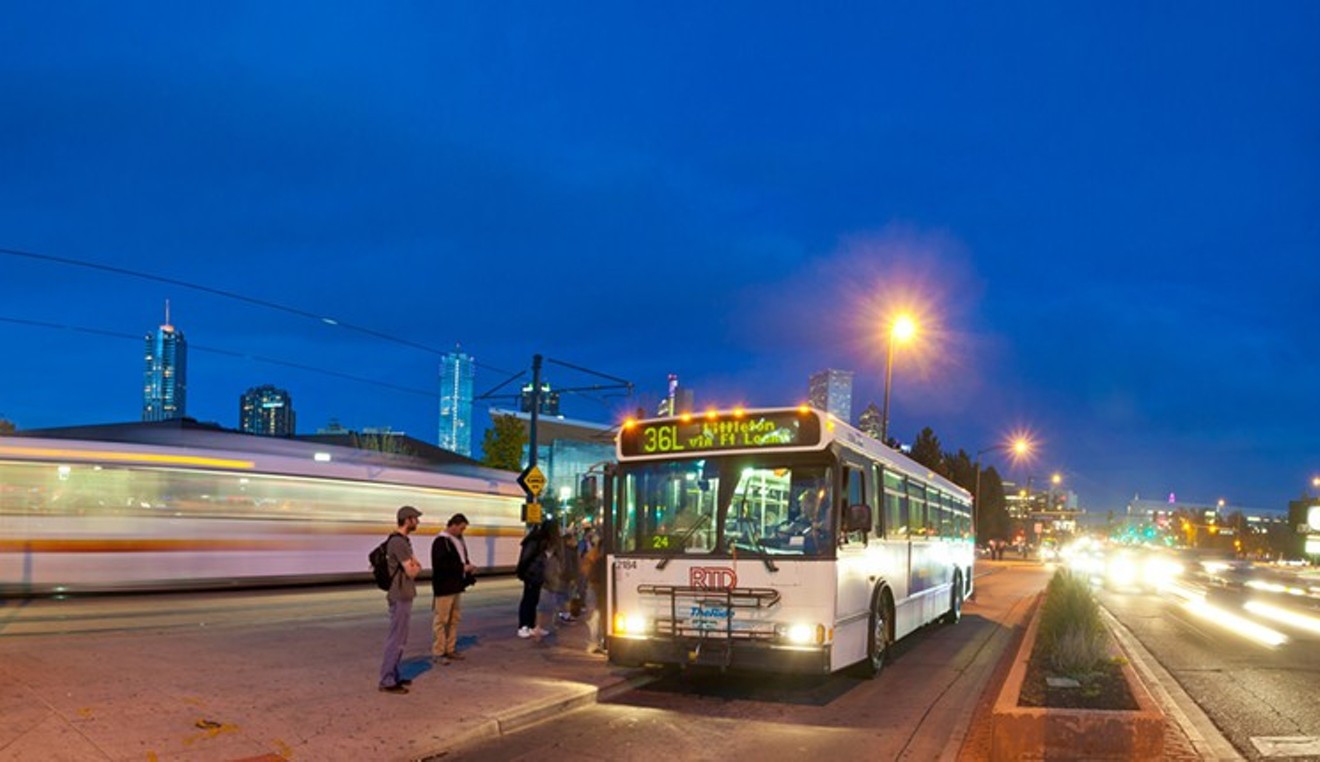 Though it was billed as a historic occasion, not everyone was there to celebrate.

Members of the Colorado People's Alliance (COPA), which advocates for social-justice issues, interrupted the proceedings with a song calling on RTD to make public transportation more accessible for riders via passes that take into account their income level.

RTD offers half-off rates to seniors and youths, free passes to active-duty military, and special rates for those with disabilities; it also provides $3 million worth of passes annually to low-income people through assistance programs. But Lupita Carrasquillo, COPA's spokeswoman, says that the regional transportation system needs to offer blanket discounted fares for those struggling to make ends meet.

"Families of Colorado deserve to have affordable and accessible public transportation," Carrasquillo says. "And the way RTD has been developing their system has not...been in the interest of the community."

RTD spokesman Nate Currey says that his agency is empathetic to COPA's message. "It's not like RTD doesn't care about this issue," he says. "Part of our federal mandate is getting people with lower income places they need to go."

But he sees a fundamental issue with COPA's argument. "It's not our role to be a service provider like that," he notes. "Typically, it's the job of the counties to play that role, with health and human services."

RTD covers seven counties, from Boulder to Douglas, and getting them to agree on something isn't always easy.

"I think we would need to be cognizant of [the fact that] the R Line crosses two jurisdictions," says Denver Department of Human Services spokeswoman Julie Smith. "There would have to be some discussion between, probably, Adams County and Denver in terms of how that would work for people [living in] Adams County or Aurora but accessing a job in Denver or other things in Denver.

"It's a fairly simple process that becomes complicated when you drill down into the details," she continues. "We actually provide several thousand bus passes on a regular basis to people who are clients of Human Services."

Courtesy RTD
In 2015, Seattle's King County made national headlines when it started offering discounted transit cards to low-income residents. Between 2008 and 2013, the county had raised fares four times, almost doubling the cost of a bus ticket, says Chris Arkills, government-relations manager for King County's Department of Transportation. Another fare increase was scheduled for 2015, but the county's executive said that he couldn't "raise fares again unless we have some relief for low-income people," Arkills recalls.

A group of interested stakeholders, including representatives of human-services agencies and city administrators, provided their input to a working group tasked with devising a program that might work. The ORCA (short for One Regional Card for All) Lift cards had to look like every other transit card and would be tied to assistance programs in the region. "If you qualified for one of those, you could qualify for this, and vice versa," Arkills explains. To minimize costs, the transit agencies partnered with the county public-health department and utilized its wide range of income-verification systems.

Two years into the program, nearly five million trips had been taken on regional light rail, buses, water taxis and Seattle's street cars with the ORCA Lift cards. The program has become a model for other cities.

But transporting it to metro Denver won't be easy. In King County, "you have the same entity able to coordinate," RTD's Currey notes. "For us, we have seven — or eight counties, if you count that piece of Weld — that we'd have to coordinate with and have a big program. We just don't have the funds or the ability," he adds, pointing to sales-tax revenue decreases that forced RTD to cut its budget last year.

While the ORCA program initially covered only the bus system, which is contained to one county, it has extended to the light-rail system, which covers parts of three counties, Arkills points out. "Even within King County, we're a very large county," he says. "We're thirteenth-largest in the country, with 2.2 million people. We have a lot of rural people, people who don't get a lot of transit service. There are different political dynamics even within our own county. It's not just rich Seattle liberals."

Denver Human Services spokeswoman Smith points to the Office of HOPE, or Housing and Opportunities for People Everywhere, as a possible solution. The office, headed by newly appointed executive director Erik Soliván, will tackle housing issues that often play into transportation needs, she says.

"Transportation and mobility is an issue that the mayor is very acutely focused on," she continues. "We also know there are overlaps between a person's ability to move forward in life and access to transportation. I would suspect that this will be an area where the new Office of HOPE will be working with our partners at RTD and Public Works to figure out where those opportunities are for us to widen resources available to people or make them more focused.

"Breaking down silos is a big part of what [the Office of HOPE] will do."