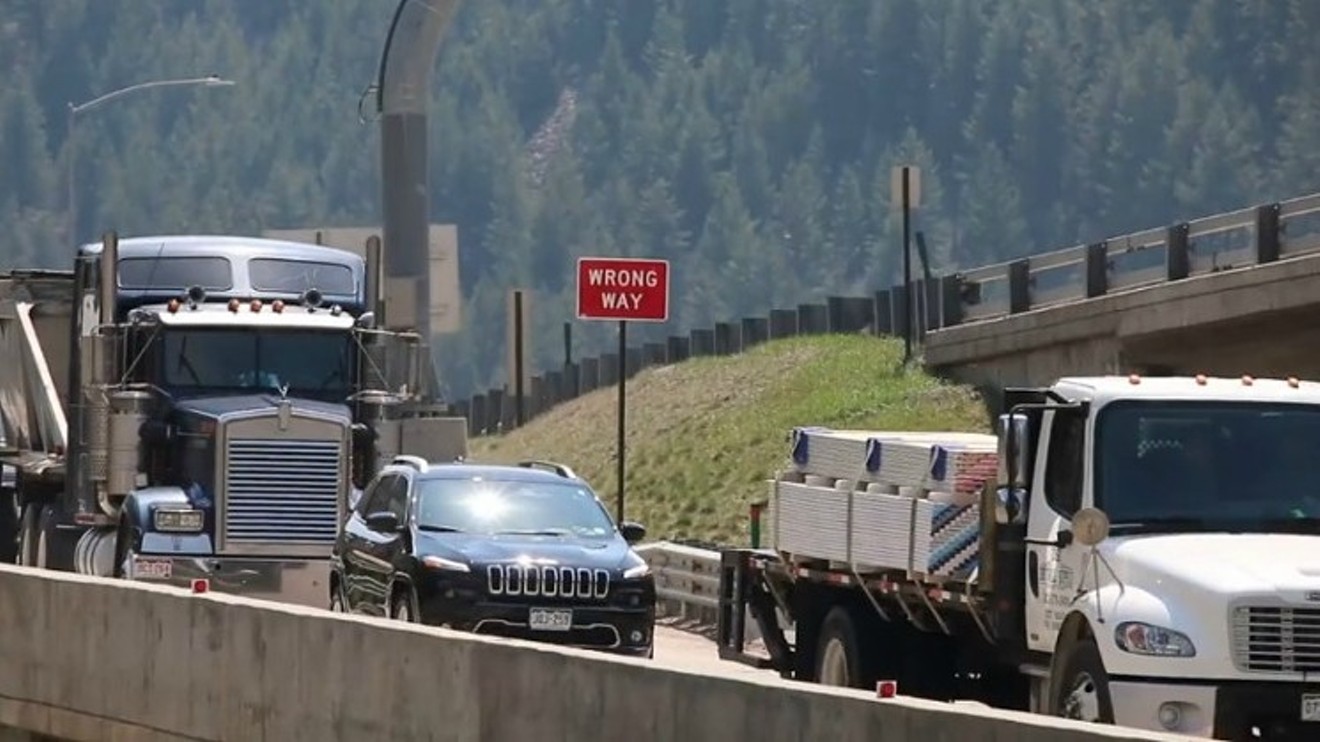 Traffic on westbound I-70 past Floyd Hill. Colorado Department of Transportation
A recent survey suggests that more people than ever before are choosing not to drive on Interstate 70 into the mountains during weekends because of regular and escalating traffic nightmares.

And while the report focuses on the ski season, its findings can be extrapolated to the summer months, when many thousands of residents in Denver and beyond find themselves weighing the opportunity to enjoy cooler temperatures and gorgeous scenery against the high likelihood of being stuck in extended gridlock.

The study was conducted by the I-70 Coalition, a nonprofit organization founded in 2004 to represent the interests of 28 local governments and businesses along the mountain corridor. The data is based on opinions shared by parkers at the T-Rex and Wooly Mammoth lots in Morrison quizzed this past January and February, as well as members of the Front Range Panel, described as a broad sample of snow-sport enthusiasts in the area.

Margaret Bowes, the coalition's director, notes that for respondents as a whole, "the level of frustration is definitely increasing."

Indeed, she goes on, "95 percent of the people who took the survey say they use multiple strategies to deal with the situation: leaving early or staying late, spending Sunday night in the mountains or driving on weekdays. But folks are saying, 'We're doing all that and we're still sitting in traffic.'"

Here's a graphic based on Front Range Panel responses to a pair of key questions: "Do you make an effort to avoid the high congestion times on I-70?" or "Do you...just accept the congestion/delays as part of your trip?" As you can see, the overwhelming majority of individuals answer yes to the first inquiry across every demographic category. 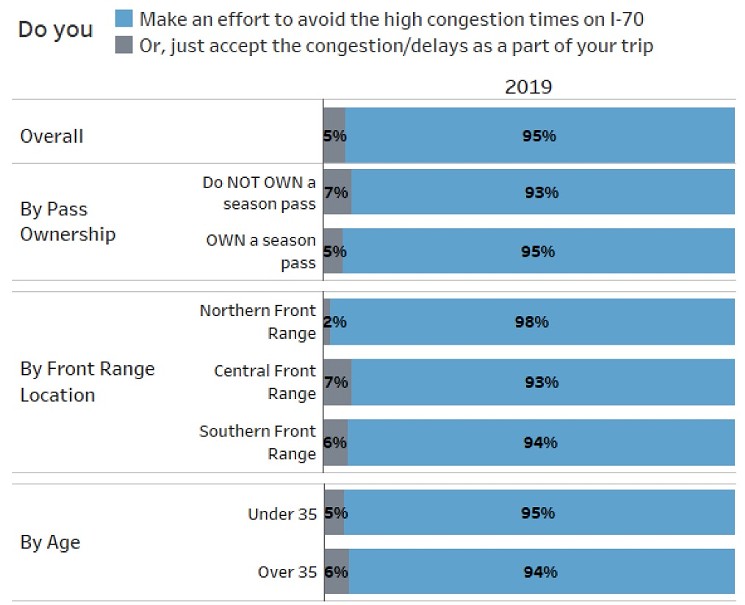 I-70 Coalition
The severity of the traffic trouble on I-70 has forced those in the Front Range Panel to get creative.

"Some of the major findings are that carpooling continues to increase on winter weekends, which is fantastic news," Bowes points out. "There's still room for improvement, and we're thinking that we may partner with a carpooling app this winter."

In addition, she continues, "61 percent of frequent travelers are very or somewhat likely to take a ski bus, and that's also encouraging news." The Bustang, the Colorado Department of Transportation's inter-regional express bus service, whose purple vehicles cruise along both I-70 and I-25, has been "hugely successful," by her estimation. "Ridership has far exceeded the predictions, and it demonstrates that folks are interested in looking at transit differently and are willing to take a bus to get them into the mountains, where we have great regional transportation services that can get them anywhere they want to go."

She feels the increasing use of information resources provided on GoI70.com represents "another positive trend" that's underscored by the following graphic, which shows that the site and updates provided by CDOT are being accessed more frequently than ever before.

But there's bad news for mountain towns and businesses in the study, too, especially when it comes to avoiding weekend travel. In previous surveys conducted in 2012, 2014 and 2017, those who steered clear of I-70 on Saturdays and Sundays landed at 31 percent or below — but in 2019, it shot up to 45 percent.

See the percentages for seven separate strategies below:

I-70 Coalition
As for how to improve the scenario, survey takers offered a series of suggestions that testify to their growing annoyance and the lengths to which they would go to improve the situation.

Here are some examples:


"Need more lanes of traffic, another portal at the Eisenhower tunnel. Stop trying to study this to death or build a train, build more lanes!!!!"

"I70 is getting unbearable. Would like to see bus / carpool lanes at a minimum. Longer term solution needs to be put on the table as it will be impossible winter and summer to get to the mountains. These communities are only growing and will continue to grow."

"Please think of alternatives to reduce the traffic. More buses, trains, anything!"

"Make it illegal for trucks to use the left lane from Golden to Grand Junction."

"Why, after so much time and money, is the recent addition of the extra lane through the twin tunnels never utilized? It makes absolutely no sense to me! Wasn't the whole idea to ease congestion in times of need? What a waste! Also, why don't the ski resorts put money into a solution for the I-70 nightmare?! They have to be losing money since they are losing clientele."

True enough. But expense has proven to be an impediment to most potential fixes.

"Larger-scale improvements on the corridor are slow in coming because of a lack of funding," Bowes concedes. "There's a long-term plan in place for the I-70 mountain corridor. It plans to the year 2050 and states that to accomplish the capacity anticipated after that, the solution has to be multi-modal; we need to have highway improvements, but also some sort of high-speed transit to accommodate demand. But looking a little more mid-term, the next major project we feel needs to happen is the Floyd Hill project — widening Floyd Hill westbound by one more lane. We see that as a high-priority project that will do a lot to improve mobility and address some safety concerns."

We previewed the Floyd Hill project last year, and at the time, CDOT representatives had high hopes it would get under way in 2019. But the failure of propositions 109 and 110, a pair of 2018 ballot measures, means that "there isn't funding for it at this time," Bowes confirms. "A lot of Coloradans don't realize how underfunded transportation is in the state of Colorado. Some projects have been awaiting funding for a decade, but because of TABOR, any tax increase has to go to the voters, and the legislature can only do so much. They have identified some additional funding from the general fund, but there's not enough money there to address the long line of projects that need to be completed. And there are always competing issues, including things like higher education. So we need new funding, not to rob Peter to pay Paul."

Over the short term, then, drivers wanting to get into the mountains will need to keep coming up with creative ways to make dealing with I-70 traffic less terrible — and Bowes hopes more Coloradans leave their ride at home.

"Even if we improve I-70, there's a limit to the number of cars mountain towns can accommodate," she emphasizes. "We need to keep promoting various transportation options out there, so we can get people up to the mountains without their personal vehicle."

Click to access the I-70 User Study: Winter 2019 Research Results.
KEEP WESTWORD FREE... Since we started Westword, it has been defined as the free, independent voice of Denver, and we'd like to keep it that way. With local media under siege, it's more important than ever for us to rally support behind funding our local journalism. You can help by participating in our "I Support" program, allowing us to keep offering readers access to our incisive coverage of local news, food and culture with no paywalls.
Make a one-time donation today for as little as $1.