Factotum Brewhouse
Factotum Brewhouse released its first flagship beer in honor of Veterans Day six years ago. Soldier's Reward Pilsner was named in part for the brewery's assistant brewer at the time, who was a veteran. Since then, it has been a regular part of Factotum's lineup, and every Veterans Day the brewery offers free pours to those who have served.

This year, Factotum's brother-and-sister owners, Laura and Chris Bruns, will add a new can image depicting their grandfather, Harold, who earned a Bronze Star in World War II serving with the U.S. Army. "He spoke German and 'lived' inside of enemy lines, in a barn, for a long portion of his tour. His job? To intercept radio signals from the Nazis and send info back to the Allies," the Brunses say. Harold joins his wife, Viola, who is pictured on the majority of the brewery's other cans. "There are many, many, many stories we could share about Harold and Viola, including how they liked to share a can of beer as they hit their twilight years."

And as usual, Factotum will be offering free pours of Soldier's Reward Pilsner today, Veterans Day, to anyone showing proof of status.

Keep reading for all of this week's craft-beer tappings and events.

FlyteCo Brewing
Wednesday, November 11
Celebrate Veterans Day with FlyteCo Brewing, which will release Vets in Jets Cream Ale and donate a portion of each sale to Stripes to Bars, which offers a scholarship "that enables veterans to get a start in aviation," the brewery says. The beer is available on draft and in twelve-ounce cans to go.

Cerebral Brewing releases three canned beers. Mirror Text is a hazy West Coast-style IPA brewed with Mosaic, Citra and Enigma hops; DDH Hollow Fang is an IPA that was double-dry-hopped with Citra, Galaxy and Nelson Sauvin hops; and Prime Conditions is an India pale lager made with El Dorado and Strata hops.

Cerveceria Colorado invites you to celebrate the release of its newest canned beer, Churro Stout, with free churros. The taproom, which is owned by Denver Beer Co. next door, will give away a hot churro from El Gallo Blanco food truck with every pint of Churro Stout. Order from either Cerveceria Colorado or Denver Beer Co. taprooms. Each pint will be served with a cinnamon-sugar-dipped rim.

Copper Kettle Brewing continues its month of dessert firkins by tapping Red Velvet Blonde Stout. This one is a blonde ale that has been infused with chocolate, lactose and vanilla. It taps at 2 p.m.

Tivoli Brewing
Thursday, November 12
Tivoli Brewing will raise its glass in honor of those who have served our country, and it will release Barrel Aged JP-8 Russian Imperial Stout. Aged for one year in Laws' Rye Whiskey barrels, "this jet-fueled version holds at 13.5 percent ABV, enough power to launch a Falcon Rocket," the brewery says. "Proceeds from each draft purchase will be donated to the MSU Denver Veteran and Military Student Education Fund."

Great Divide Brewery & Roadhouse in Castle Rock taps its first-ever milkshake IPA. The beer "has a full and creamy body with a nice background sweetness to complement the fruit character and contrast the bitterness," Great Divide says. "Head brewer Tony Rau wanted to brew an approachable and refreshing IPA for people who typically don’t like hoppy beers. With fruit-boutique hops and lacking heavy bitterness, it drinks more like a tropical citrus cocktail, particularly a piña colada." 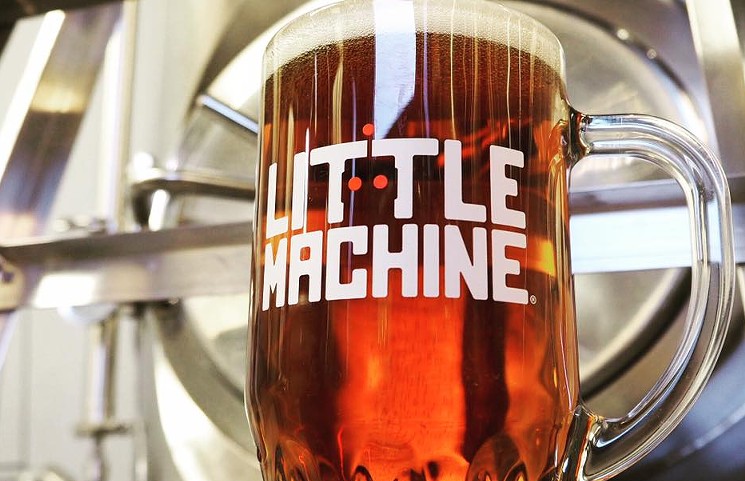 Our Mutual Friend Brewing will have a new cherry-infused version of its stellar Weirding Way available in bottles and on draft. Balaton Cherry Weirding Way is a dry-hopped farmhouse saison fermented entirely with Brettanomyces yeast in a foeder and aged with Balaton cherries.

Snowed In Mocha was the very first of Copper Kettle Brewing's variations on its barrel-aged imperial oatmeal stout, Snowed In, and it returns today for the eighth year. Brewed with local coffee from Kind & Co. and aged in bourbon barrels, the 12.4 percent ABV beer is available on draft and in 19.2-ounce cans to go.

4 Noses Brewing unveils the second in its planned series of oak-aged lagers. Foeder Maibock was fermented in the brewery's American Missouri Oak foeder. "We used a decoction mash method to bring more depth to the flavor of this lager," the brewery says. "Featuring the traditional Maibock malts, Pilsner and Vienna, the 7.4 percent ABV beer is a great way to taste the magic of foeder fermentation."

New Image Brewing has two new beers available in cans and on draft. The first is This Is What Happens When You Find A Stranger In The Alps, White Russian-inspired 10.5 percent milk stout made with lactose, marshmallow, coffee, vanilla, and heavy cream. The second beer is the latest version of Double Double, a 9.5 percent double dry-hopped double IPA brewed with Ella and Simcoe hops.

Upslope Brewing in Boulder has been celebrating its twelfth anniversary with various deals and discounts this week, but today it will tap a new beer called Foeder-Aged Apricot Sour Ale. "This bright, effervescent beer is a culmination of our mixed-culture golden sour ale, re-fermented on 1,200 pounds of apricots for eight weeks," the brewery says. "Juicy, stone fruit elements are accompanied by notes of Meyer lemon, tangy minerality and terse acidity. Enjoy now for a more fruit-forward experience, or cellar for an extended period of time to further develop Brettanomyces complexity."

River North Brewery
Saturday, November 14
Okay, so I guess pumpkin season continues until the last pumpkin pies have been eaten, which gives us most of November to enjoy pumpkin beers, as well. As such, River North Brewery will release Barrel Aged Pumpkin Spice J. Marie in bottles and on tap at both taprooms. The beer is the brewery's imperial saison, which has been spiked with pumpkin purée as well as pumpkin spice. "You will find this to be a well-balanced, lightly spiced and aromatic beer that will have you cozy in no time," the brewery says. "Coming in at 10.3 percent ABV, we threw this J. Marie into whiskey barrels, adding a whiskey, oak finish to the beer."

"Brewing is fun, but it's more fun with friends." So says Coal Mine Avenue Brewing in Littleton, which got together with its friends at Landlocked Ales in Lakewood for another collaboration brew. "This time we're bringing a juice bomb of an IPA your way," the brewery says. To make Suburban Apeel Blood Orange IPA, "we used 126 pounds of blood orange purée, along with Citra and Mandarina Bavaria hops to create a strong orange and citrus flavor, and brought in Sabro hops to round out the profile with tropical flavors that leave you reminded of your favorite orange mall drink." The beer is on tap at both breweries.

Join Grist Brewing as it celebrates its seventh anniversary with an Unlucky Seven party, featuring food, live music and entertainment, social distancing and lots of beer.

Wild Provisions Beer Project will have fresh sixteen-ounce cans of its Premium Pale Czech-Style Lager and its Czech-Style Dark Lager. The second one is 4.2 percent ABV, down from 5.2 percent last time.

Saturday, November 21
Join the owners of Burns Family Artisan Ales for an event from 8 to 10 p.m. celebrating the release of No Barrels Included, a 17.2 percent ABV Russian imperial stout that was aged for one year in stainless steel. In addition to the release, there will be other beers, small plates and conversation. Tickets are $50 on Eventbrite.

Wednesday, November 25
Copper Kettle Brewing wraps its month of dessert firkins with Banana Cream Pie Snowed In, a version of its barrel-aged imperial oatmeal stout with banana. It's on draft only.

Friday, November 27
As it does every year, Station 26 Brewing releases an imperial stout on Black Friday. This time around, the brewery has one hundred four-packs (twelve-ounce bottles) of Hell Bear Imperial Stout. Each four-pack contains four different variants of the beer: Coffee, Mexican Chocolate, Vanilla Chai, and Whiskey Barrel-Aged Hell Bear.
Online pre-orders will begin at 10 a.m. on Thanksgiving Day. It will also be on draft.

Celebrate Black Friday at Westfax Brewing, which will host four beer releases and food truck and a marketplace with local crafters. The beers are: Beta Wave 2020, a 10.3 percent ABV bourbon barrel-aged imperial stout; I Do Eclair, a 7.7 percent pastry stout with notes of hazelnut, vanilla, chocolate and caramel; Sippin' On A Cloud, an 8 percent juicy/hazy double IPA brewed with Sabro, Mosaic, Ekuanot, and Enigma hops; and a mystery fourth beers. The marketplace will run from 2 to 6 p.m.

Saturday, November 28
Woods Boss Brewing brings back Magical Narwhal, a milk stout brewed with fifteen pounds of peppermint candy canes. "This beer is a cheers to our friends, family and beer lovers everywhere and feels like a big, warm, hug, piled with heaps of candy canes straight from the North Pole," the brewery says.
KEEP WESTWORD FREE... Since we started Westword, it has been defined as the free, independent voice of Denver, and we'd like to keep it that way. With local media under siege, it's more important than ever for us to rally support behind funding our local journalism. You can help by participating in our "I Support" program, allowing us to keep offering readers access to our incisive coverage of local news, food and culture with no paywalls.
Make a one-time donation today for as little as $1.