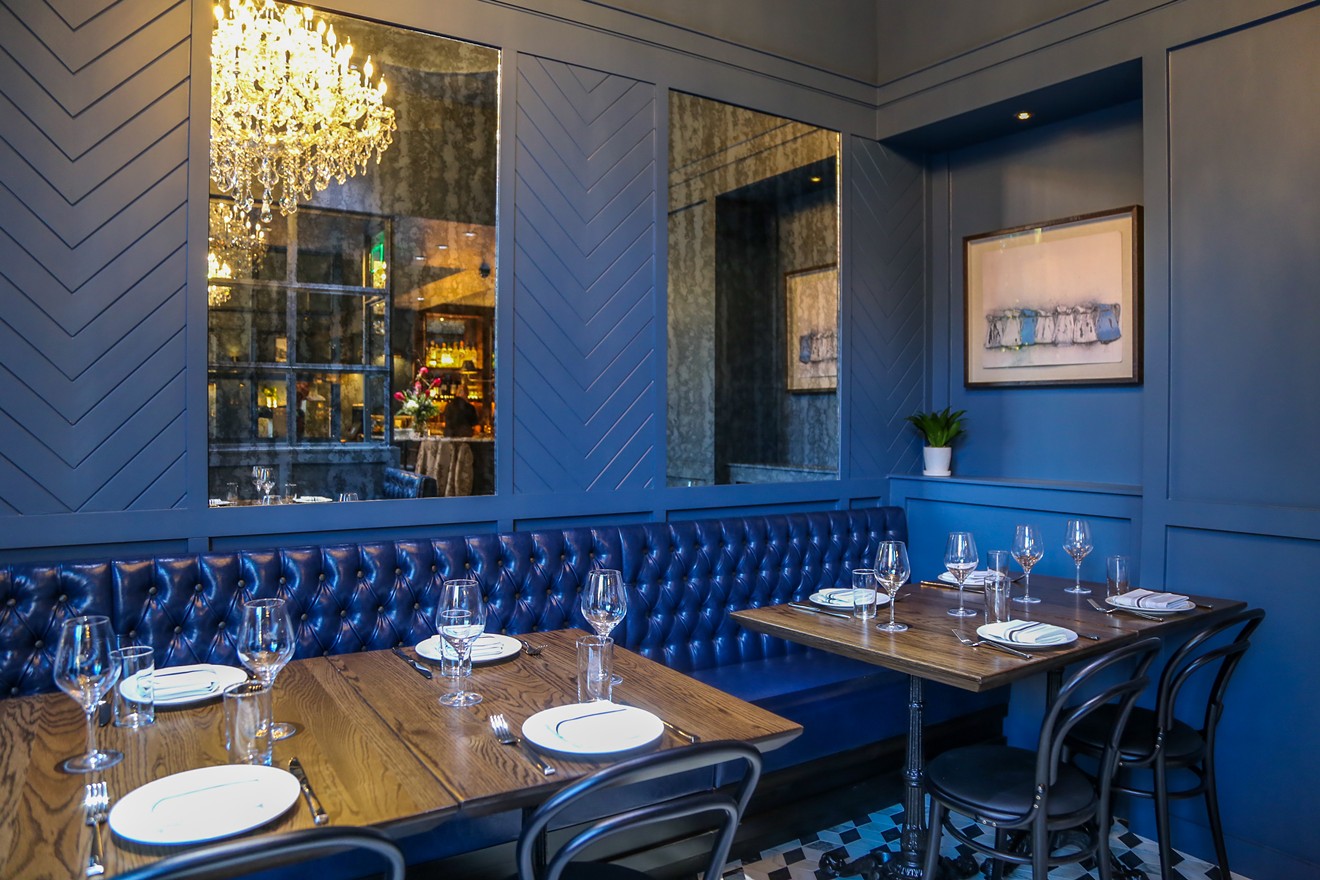 LeRoux reopens as Bistro LeRoux on December 17. ChoLon Restaurant Concepts
After closing temporarily in early July, LeRoux is reopening at 1510 16th Street on Friday, December 17, as Bistro Leroux. "We wanted to add the word 'bistro' in front of it really to just signal to people that you can come here on a Sunday night or a Wednesday night and feel comfortable doing that, and that there will be delicious, more casual offerings for you," explains Christopher Davis-Massey, co-founder and chief operating officer of ChoLon Restaurant Concepts.

The eatery, which is named in honor of Xavier LeRoux, chef and restaurateur Lon Symensma's mentor at the Culinary Institute of America, focused on French cuisine in a fine-dining setting when it originally opened in 2018.

Now the menu has been updated to include other parts of Europe, with dishes such as rigatoni with a pork Bolognese ($23) and Moroccan chicken tagine ($25) — though the restaurant's signature dishes, including wagyu beef tartare ($19) and onion-crusted short rib ($37), remain. Oysters, served raw or broiled Rockefeller style, are four for $16, and the new lineup offers a 'snacks' section with items like citrus-marinated olives and radish crudité, all for under $10, as well as a selection of small plates for under $20.

"We're just expanding the net of where the dishes come from in Europe," Davis-Massey says. "We're primarily a French restaurant, but we don't want to be pigeonholed into that. We just want people to come in and have great dishes from Europe."

The interior largely remains the same, but the front room — which looks out onto the 16th Street Mall — has been transformed into a wine bar-like lounge area.  And while the special-occasion-style meal that LeRoux excelled at prior to the changes will "still be available to our loyal and loving guests," Davis-Massey says, the restaurant is "trying to attract that slightly younger crowd that wants something just a little more casual but still excellent."

The 7X wagyu steak tartare with smoked egg salad, crème fraîche and potato chips is still on the revamped menu.
Matt Nager
The decision to expand the menu to include influences beyond France was in the works before the closure. "It was something we were planning to do last summer," David-Massey notes, "and then we decided to pause."

The restaurant group never would have considered a temporary close before the pandemic, David-Massey says. But with staffing shortages and changing capacity restrictions over the summer, it made more sense to shut down completely for a period of time than to try to continue operating under less than ideal conditions. At the time, he recalls, the thinking was, "It's going to be very stressful to be open for five days a week and barely break even or make just a little bit of profit. Or [we] could just pause and have a little bit of loss but really be able to accomplish things that, hopefully in the long run, will be better for the concept."

While the changes at Bistro LeRoux are somewhat subtle, David-Massey hopes that they will draw in the still-growing crowds returning to downtown. "It's not like it was before," he says of pre-pandemic days, "but it's better than it was in the summer or the spring. On weekends, it's packed.... We just still haven't gotten back that mass energy of the daytime, of people that worked downtown."

Like the restaurant group's other 16th Street Mall concepts, ChoLon and the recently opened YumCha, the revamped Bistro LeRoux will be open five days a week. Along with dinner, it will offer a daily happy hour featuring items from the snacks and small plates sections of the menu, as well as wine and cocktail specials. There are plans to add Sunday brunch and prix fixe menu options designed for pre-theater meals, as well.

Bistro LeRoux is located at 1510 16th Street and will be open 4 to 9 p.m. Wednesday, Thursday and Sunday, and 4 to 9:30 p.m. Friday and Saturday. For more information, visit lerouxdenver.com.
KEEP WESTWORD FREE... Since we started Westword, it has been defined as the free, independent voice of Denver, and we'd like to keep it that way. With local media under siege, it's more important than ever for us to rally support behind funding our local journalism. You can help by participating in our "I Support" program, allowing us to keep offering readers access to our incisive coverage of local news, food and culture with no paywalls.
Make a one-time donation today for as little as $1.