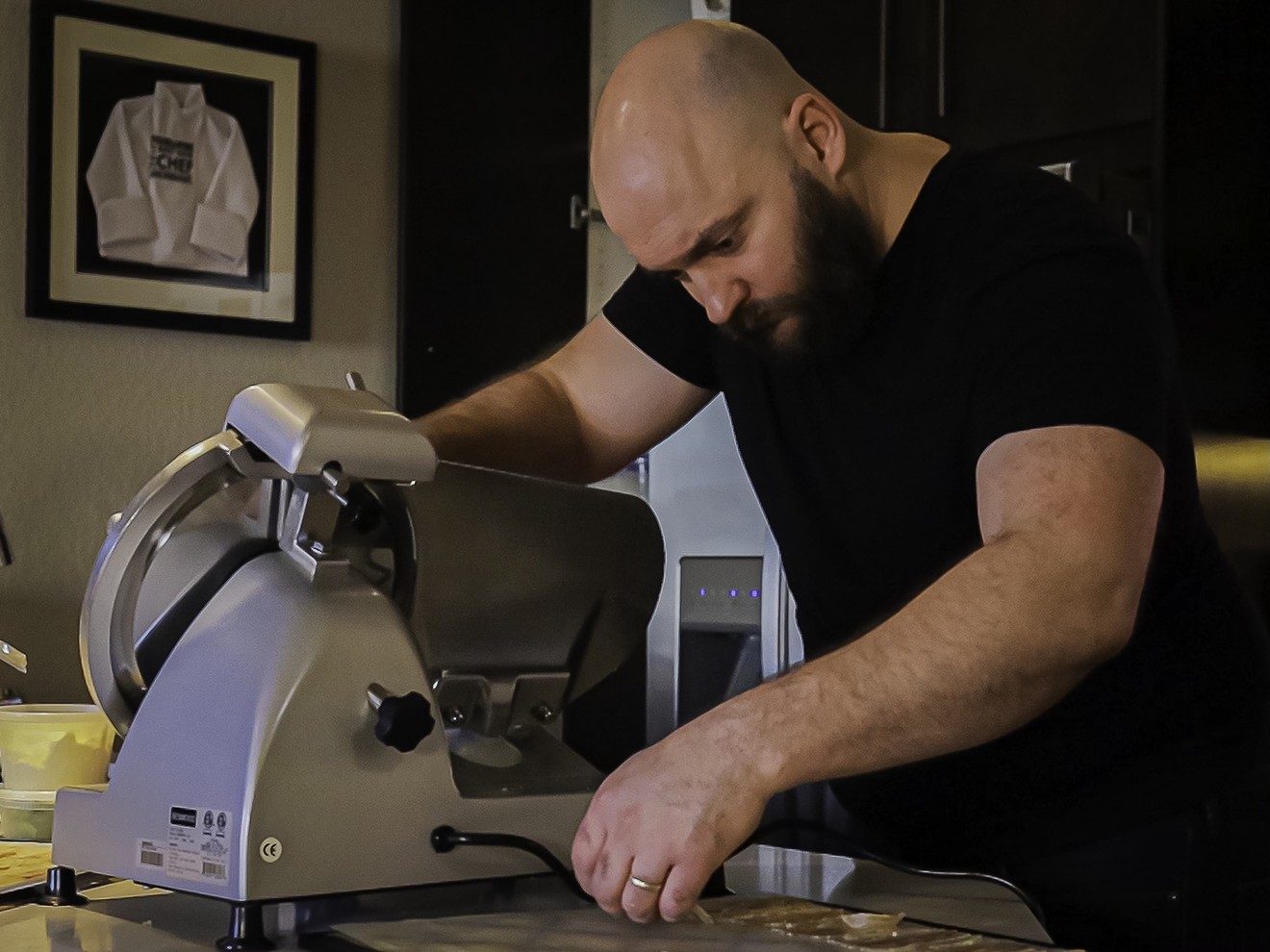 Chef Jacob Bickelhaupt is now cooking in Denver with his Konro private dinners. Courtesy of Jacob Bickelhaupt
A Chicago chef starts an underground supper club that achieves such acclaim, he parlays the success into a high-end restaurant called 42 Grams, landing two Michelin stars and a documentary about the place along the way.

But 42 Grams closed in the summer of 2017, when chef/owner Jacob Bickelhaupt was arrested for hitting Alexa Welsh, his ex-wife and then-business partner, over the head with a bottle in the restaurant parking lot. Welsh wound up in the hospital getting stitches, and Bickelhaupt eventually pleaded guilty to battery; he was ordered to pay fines, go through an anger-management program and undergo several months of mandatory drug and alcohol testing.

Bickelhaupt is now working on a second act in Denver, where he's launched a pop-up supper club called Konro.

Bickelhaupt is not the kind of chef who works in anonymity behind closed doors. His personality is intertwined with his cooking and service, especially at Konro, which presents upwards of twelve courses at a location revealed to diners 24 hours before the pop-up meal; there's no printed menu, and the chef describes each course as he serves it. He's also built a considerable catalogue of social media photos and videos, some of which showcase his culinary creations, while others, such as his Sous Chef Academy on YouTube, give kitchen guidance to other aspiring chefs. 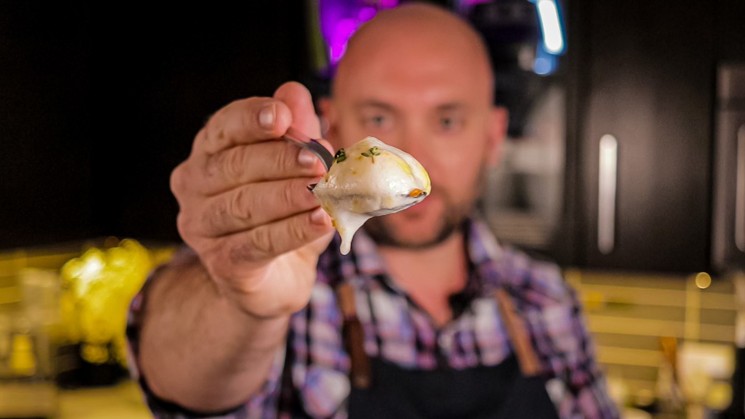 Bickelhaupt's personality and the dining experience are intertwined at Konro.
Courtesy of Jacob Bickelhaupt
When 42 Grams was open, documentary director Jack C. Newell created an 82-minute film bearing the restaurant's name, and Bickelhaupt is now making his own documentary with the working title 86ed — the phrase bartenders use when they're kicking out or cutting off a customer. "It's about the idea of being 86ed and cancel culture, right?" Bickelhaupt says, explaining how he was "canceled" in Chicago. "I was 86ed — not everywhere, but in certain parts. It humbled my butt, it really did. It was frustrating, of course, because you want to provide, but it really humbled me."

The chef came to Denver in part because his new wife, Nadia Bickelhaupt, grew up in Colorado Springs, and in part to find a new audience for his style of hospitality, which relies heavily on his interactions with guests. "It's just Nadia and I; we do just one private group, whether it's a household or a group of friends," he says of the Konro concept. "With trust in general, even if they don't know my whole story, they're spending good money to go somewhere they don't know, and that's a lot of trust. I don't take that lightly.

"But the people that we're meeting, everyone knows my story," he continues. "We talk about it sometimes, if they have any questions. They meet me, and they've heard about [my past], and they're giving me a shot."

Bickelhaupt at a recent Konro dinner.
Courtesy of Jacob Bickelhaupt
Chicago diners were not as willing to give Bickelhaupt a shot when he opened Stone Flower in May 2019, two years after 42 Grams closed. He didn't attempt to hide his legal troubles; Stone Flower's home page included this statement in his bio:


Chef Jacob Bickelhaupt said that he is saddened and deeply remorseful about his troubled past of an isolated incident violence with his ex wife Alexa Welsh after the closure of 2 Michelin star restaurant, 42 grams. And, Jacob Bickelhaupt is beyond grateful for the opportunity of redemption and second chance all while living during the cancel culture and #MeToo era.


While some customers who had known him for a long time continued to support him, Bickelhaupt says, business was just below the level needed to sustain Stone Flower long-term. Then the pandemic hit last March; that, coupled with the lack of support, led him to close Stone Flower. "It's all public," he recalls, "where food writers said they're not going to eat there and review the restaurant."

That's one reason that Bickelhaupt is starting out small in Denver. "The main thing is that...it's organic; we don't want to do any advertising or reach out to people, because I'm not entitled to anything — I'm not expecting anything," he explains. "We'll see what happens with the broader audience. It is what it is: I'm not hiding anything. I understand everything, and I don't feel entitled to anything. I'm just grateful people are coming."

Those who've heard about Konro and have decided to entrust their time and money to Bickelhaupt include families with kids (adventurous kids, he notes, as well as parents well-off enough to shell out $195 per person, pre-paid), and people in the restaurant industry. One woman brought her son, who is into food and photography; they plan to return for his birthday. "That, to me, is the barometer of success for cooking now," Bickelhaupt says. "This person knows everything about me, and they want to come back with probably the most important person in their life and celebrate the most important day in their life. And I don't take that lightly."

While Bickelhaupt says that he doesn't want to blame his past actions on substance abuse, he adds that sobriety has brought clarity, both in the kitchen and in his interactions with others. "Creativity flows easier," he explains, "and the whole process of executing the inspiration is easier. Before, I had a chip on my shoulder...and it almost destroyed my life and others'. But now I just want to provide for my family, and I want to create."

As for the incident with his ex-wife, "I've put work in every single day for four years to make sure that never happens again," he continues. "And I don't want to hide it. That's the only way to move forward, is to have discussions without anger and without extremism."

In the past, Bickelhaupt has talked about making amends, but he says that's now something between him and the people he hurt the most. "For me to say this sounds like I'm making excuses, [but] there's no excuse for what happened. I understand everything, and I don't feel entitled to anything," he explains. "I'm not shutting the door on the past, but I can't live there."

What does it take for a chef to regain the trust of his audience? Is it the passage of time, the words spoken publicly, the dedication to sobriety, the intimate interactions during private dinners? That's up to every diner; Bickelhaupt acknowledges that he can't prove that he's changed except by "being a good person" every day. He's taking his current concept by the day, too. When customers ask if he plans to turn Konro into a full-service restaurant, he says he responds that "I would like to, yes, but one day at a time. This is what we're doing, and I'm happy. It's not a forever thing, but I'm happy cooking and making people happy."

Concludes Bickelhaupt: "I'm here...and we're making our home here. If I can cook, thank you. If I can't, that's unfortunate, but I'm here."
KEEP WESTWORD FREE... Since we started Westword, it has been defined as the free, independent voice of Denver, and we'd like to keep it that way. With local media under siege, it's more important than ever for us to rally support behind funding our local journalism. You can help by participating in our "I Support" program, allowing us to keep offering readers access to our incisive coverage of local news, food and culture with no paywalls.
Make a one-time donation today for as little as $1.