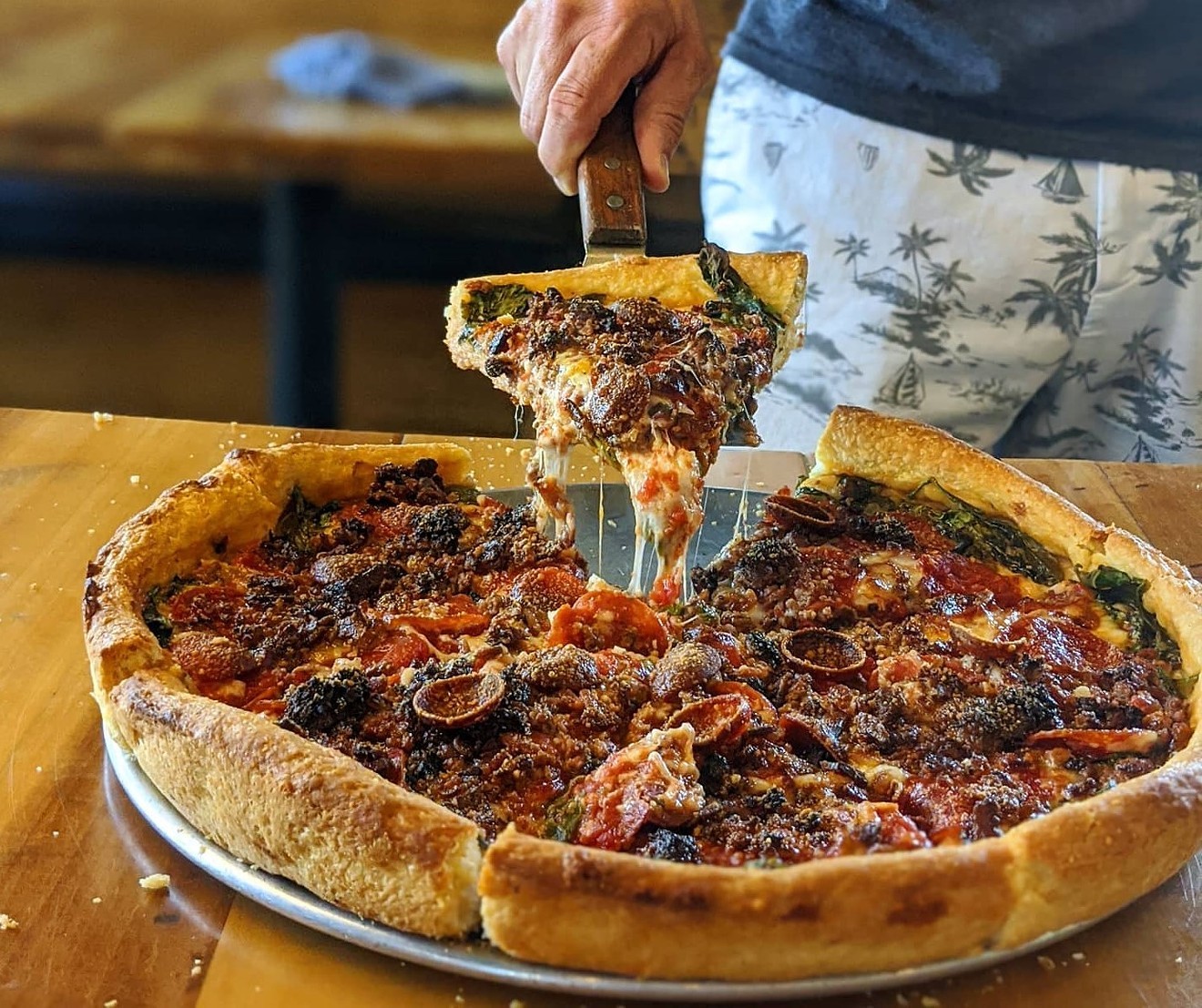 Crush Pizza will close after service on April 30. Crush Pizza + Tap/Facebook
On April 27, two very different restaurants announced that Saturday, April 30, will be their last day in business.

Crush Pizza + Tap opened at 1200 West 38th Avenue in early 2015 as Denver Deep Dish before changing its name in 2018 to better reflect the styles of pizza it had begun to offer. From light and airy Sicilian-style to gluten-free pies, Crush's pizzas garnered many fans — and landed the place on Westword's list of best pizzerias in February.

It also made an appearance on our best wings list in 2021. Shortly after that list was published, Crush owner Jason McGovern debuted a new eatery, Crush Wing + Tap, which put the brand's flats and drums front and center. But that location was short-lived; it closed on April 9, just six months after opening in the former home of the Elm at 5001 East Colfax Avenue. "We never really got Wings off of the ground. ... Ultimately I would say I was a little premature in opening a second location," McGovern admits.

At the time, fans of Crush were heartened to know that they could still get their wings and pizza fix at the original location, but the relief didn't last long. "It's with great sadness but with a clear mind that we will have to close this beautiful restaurant we built seven years ago after service this Saturday," Crush wrote in an April 27 Instagram post.

"Costs are up, labor is up, the talent pool is weaker than before," McGovern explains. "I think most restaurateurs would agree that the last 24 months felt more like five years," he adds, noting that his own desire to find a better work/life balance after ten years in the pizza game played a big role in the decision to close Crush as well. "It was a hard decision to make, but after making it with Wing, it really made me think about those other aspects of my life." Supermoon in Boulder is shuttering after a final party on April 30.
Leigh Chavez Bush
That's the same day Supermoon announced that it was shutting its doors at 909 Walnut Street in Boulder.

"Supermoon grew from the wreckage of the pandemic," it announced on Instagram. "We set out to create a place for people to gather and re-emerge from isolation. ... A few of us have been working and operating in this location for 7+ years. We started this journey young and green. Today we're different; older, more seasoned, able to make the hard decisions when they are called for, as is the case now."

In early January, what had been Arcana was transformed into Supermoon, an Asian-inspired concept from the same team; it soon became known for its late-night dance parties.

And there will be one more: On April 30, Supermoon will be open from 9 p.m. to 2 a.m. for a last hurrah.
KEEP WESTWORD FREE... Since we started Westword, it has been defined as the free, independent voice of Denver, and we'd like to keep it that way. With local media under siege, it's more important than ever for us to rally support behind funding our local journalism. You can help by participating in our "I Support" program, allowing us to keep offering readers access to our incisive coverage of local news, food and culture with no paywalls.
Make a one-time donation today for as little as $1.