The Best Sandwich Shops in Denver The sandwiches at Lou's are big enough to split. From the Hip Photo
From hoagies, grinders and subs to po'boys, tortas and banh mi, sandwiches come with many names and in many forms.

Most restaurant menus include at least one sandwich, so when we set out to find this city's best sandwich shops, we set some ground rules. First, we're sticking with eateries where sandwiches are the focus, and spots that are not national chains (sorry, Jersey Mike's fans). And while this city has thriving food truck and pop-up scenes, we limited our choices to brick-and-mortar locations to ensure that these are places you can hit up on the regular, all year long — with one notable exception.

Here are the ten best sandwich shops in metro Denver, in alphabetical order, as well as a bonus pick: A certain spiky-haired television personality may have been the one to turn a lot of people on to this strip-mall eatery in southeast Denver when he stopped by in 2011, but now 55 years old, the Bagel Deli was a favorite with fans of Jewish deli fare long before that. One part of the space is a bare-bones deli where you can get black-and-white cookies, celery-flavored Dr. Brown's sodas and scoops of egg salad to go. The other is a dining room with walls covered in family photos and other memorabilia. Matzo ball soup and knishes are some of the menu staples, but sandwiches are the real stars, whether it's a breakfast sandwich on a bagel, a Reuben made with latkes instead of bread, or a simple but classic pastrami on rye, with the thin-sliced meat piled high. Up next for this longtime Denver staple: an outpost at DIA, expected to open in 2023. 2439 South University Boulevard
303-722-7113
Lucky us: There are a number of places in Denver that excel at banh mi, the Vietnamese sandwich served on a French baguette. Banh Mi Station opened just over a year ago as Little Bakery House, but owner Tom Xu (who worked at his family's now-closed dim sum restaurant King's Land for eighteen years) quickly realized that the clientele in the University of Denver neighborhood was confused by the moniker. In Vietnam, "bakery" is synonymous with banh mi, but customers kept coming in looking for cupcakes. By August 2021, a new sign with the new name was up. This is the only banh mi spot in town that offers a fried chicken option for the sandwich, but we can't get enough of the lemongrass grilled pork. No matter which version you choose, it's served on bread baked in-house daily with the classic additions: mayo, cucumber, jalapeño, cilantro and pickled radish and carrot. 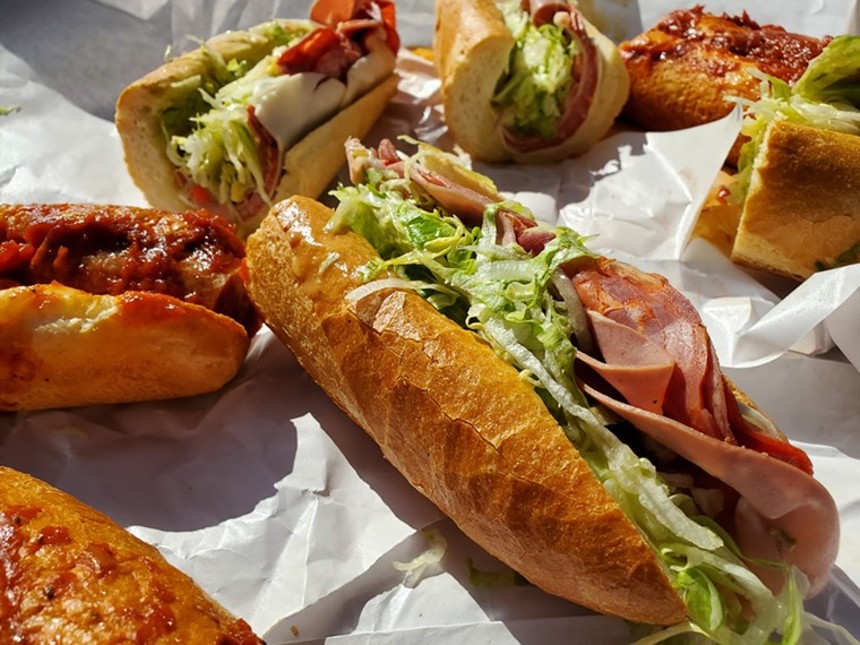 7585 West Florida Avenue, Lakewood
303-985-3555
Carmine Lonardo's is way more than a sandwich joint. This cozy, family-owned Italian market and deli has been around since 1976, and its shelves are lined with imported pasta of all shapes and sizes, olive oil, canned goods, frozen foods like housemade sausages and so much more. Still, the sandwiches — huge, messy masterpieces loaded onto freshly baked rolls, which you can custom-order with that Italian sausage and a variety of other meats in hot and cold varieties — are unbeatable, and reason enough to visit. 2532 Champa Street
303-308-5973
2700 East Sixth Avenue
303-900-9028
curtisparkdeli.com
Curtis Park Deli has a small but thoughtful selection of classic deli sandwiches, and it ups the game with the freshest ingredients and loving touches such as housemade aiolis, the best cheeses and light but chewy ciabatta rolls from the bread experts at City Bakery. These aren't gut-busters like some other sandwiches on this list, but rather the perfect size for a lunch break — which is why both locations are always busy mid-day. Soon, Boulder will get a taste of Curtis Park Deli, too, when a third location opens at 3000 Pearl Parkway. 1207 Washington Avenue, Golden
303-279-8020
ddeligolden.com
"Trust the process" should be the unofficial motto of D'Deli, a Golden sandwich shop that's been open since 1975. There's almost always a line out the door, but the friendly staff is happy to chat and joke around as they sling together ingredients in often confounding combinations from the huge menu. The classics are covered, but you can also opt for the Jackwagon (peanut butter, jelly, honey, sriracha, sunflower seeds, bacon, crispy fried onions, pineapple, jalapeños and banana peppers) or the employee favorite, the Knuckle Sandwich, with smoked prime rib, artichoke dip, cayenne honey and jalapeños served panini style on a super-soft roll turned inside out and grilled. The 120-plus ingredient options include house-smoked bison and elk, too.The sandwich that results from your order may not be exactly photogenic, but it's certain to be completely delicious. 4369 Stuart Street
720-598-6863
thegratefulgnome.com
The Gnome opened in 2018, and while cold beer is a great reason to visit the spacious brewpub, the sandwiches are the headliners. Chopped cheese (which is having a moment in Denver right now), Taylor ham and housemade meatballs are some of the standouts in the wide selection of New York- and New Jersey-inspired options, all of which you can enjoy while listening to a soundtrack of Phish and Billy Strings (or live music, which the Gnome often hosts on weekends). The huge variety of top-quality meats and cheeses coupled with the relaxed atmosphere make this the kind of place where you'll soon be a regular. 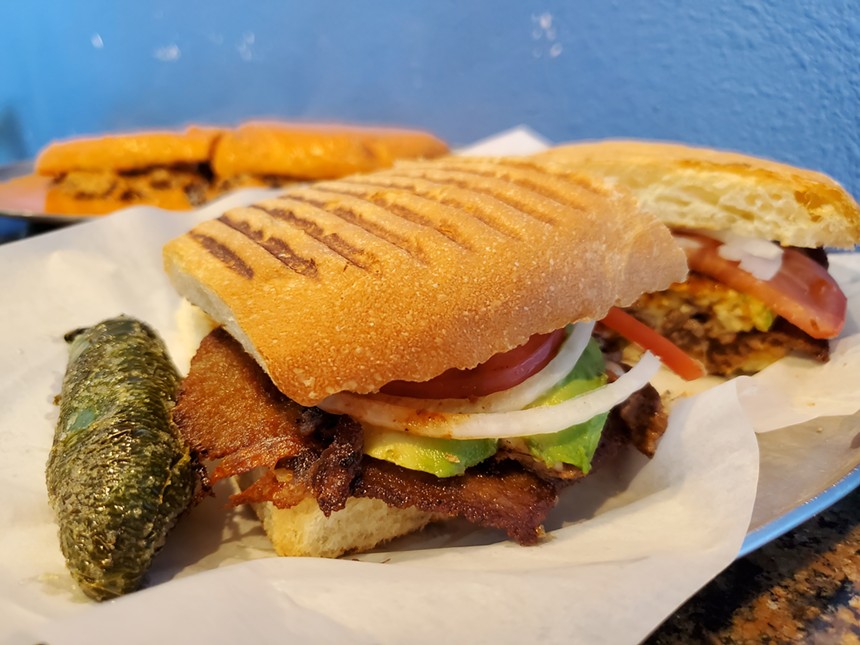 The Norteña is the most popular option at Las Tortas.
Molly Martin
Las Tortas

5307 Leetsdale Drive
720-379-7269
lastortasendenver.com
Tortas take all the deliciousness of Mexican fare and pile it on soft rolls. And the tortas at Las Tortas, which also has locations in Thornton and Greeley, are the most delicious of all. When ordering at the counter, newbies will be told that the Norteña, with carne asada, breaded steak and cheese, is the best seller. Like all of the standard torta options here, it comes fully loaded with mayo, avocado, tomato, lettuce and beans. But there's another type of torta on the menu that requires a fork and knife to eat: the torta ahogada, which comes loaded with juicy, flavorful carnitas and smothered in a spicy chile and tomato sauce for a messy meal reminiscent of dipping a grilled cheese sandwich in tomato soup. It's best eaten immediately, so consider toting your own silverware if you're dining in, as the plastic stuff that the shop has on hand can't really handle the job. 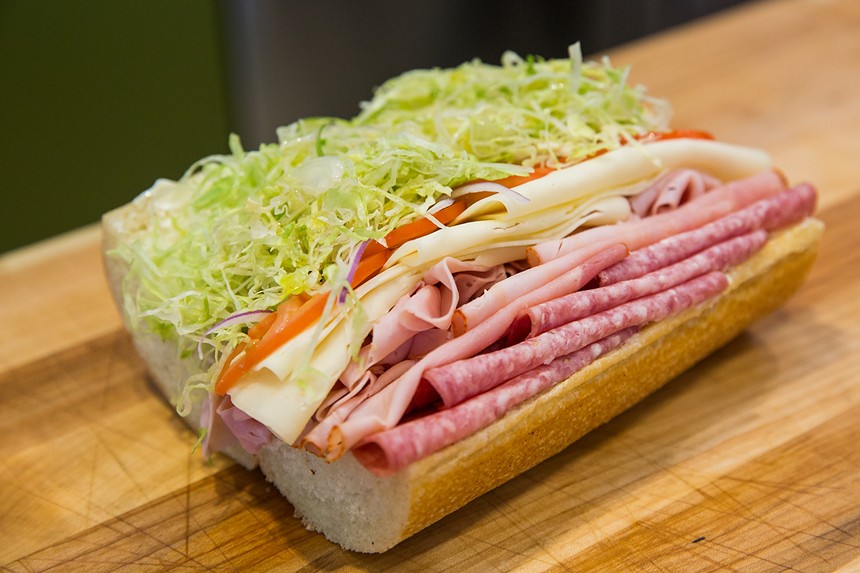 3357 Downing Street
720-287-3642
lousitalianspecialties.com
In 2018, Rosenberg's owner Josh Pollack added this East Coast-style deli in Five Points to his growing collection of New York-inspired concepts, which includes Original Famous J's (which landed on our list of the ten best pizza places). Lou's has a solid selection of both hot and cold sandwiches, available in full or half sizes — and a full is indeed enough to split or last for two meals. Generously loaded with freshly sliced meats and cheeses, the Louie is a great intro to what this place does best, as is the hot porchetta broccoli rabe. 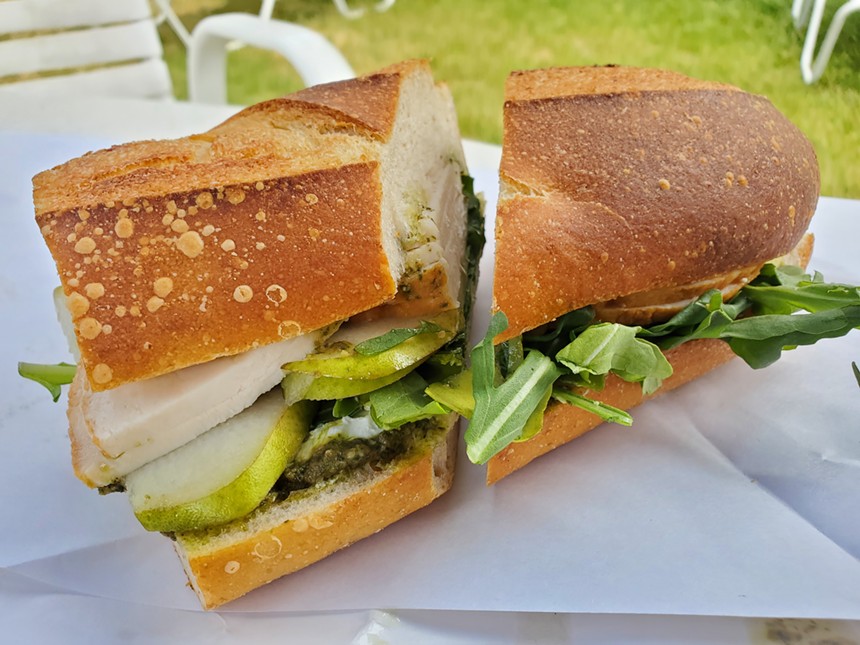 4621 East 23rd Avenue
303-329-8143
spinellismarket.com
Spinelli's opened in Park Hill in 1994, but it feels like it's been around far longer. The friendly neighborhood market is stocked with essentials as well as some gourmet finds — but before you browse, head directly to the deli counter in the back to place your order from a long menu of sandwich options. There are a few tables in the front where you can eat, but these hefty sandwiches are ideal for taking on a picnic or along for a mid-show snack at Red Rocks. 7750 West 38th Avenue, Wheat Ridge
303-421-3955
vinnolasitalianmarket.com
This nearly fifty-year-old spot used to be one of many Italian markets in the area. Most are gone now, but Vinnola's lives on, with a crew of friendly staffers ready to greet you like a family member they just met. The small menu board lists a variety of options, but most people come for one thing: the Italian sausage sandwich. Don't expect a huge, messy, red-sauce-soaked situation here. Instead, Vinnola's serves a housemade, flat Italian sausage patty on a super-soft yeasty roll baked on site. It comes topped with peppers and onions with a large side of red sauce for dipping or smothering, as well as a bag of Lay's. Pair it with an Italian soda, and plan to spend some time post-meal checking out the selection of Italian goodies, from pasta to pizzelles. 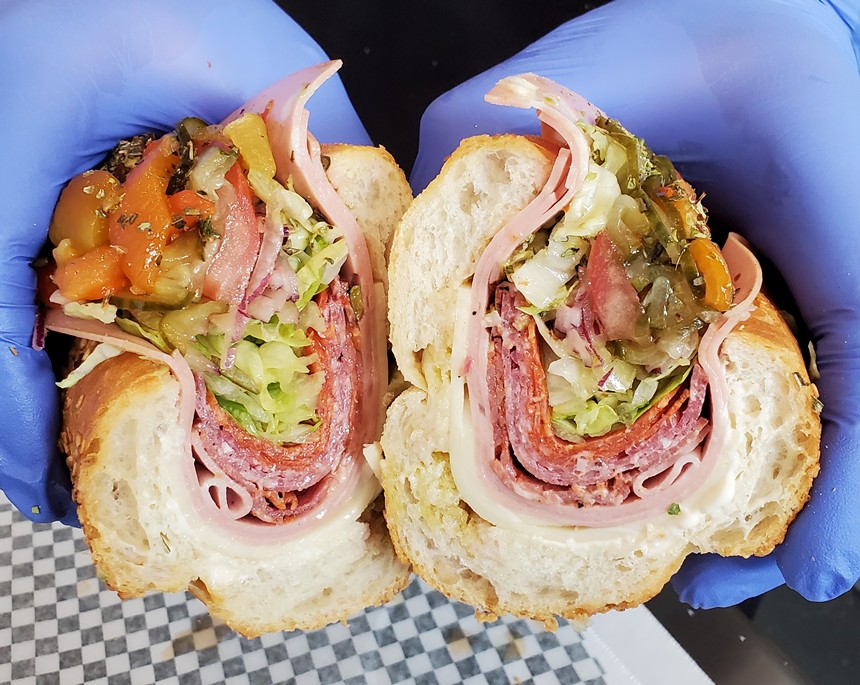 littlearthurs.com
It's nearly impossible to talk about sandwiches in Denver right now without Little Arthur's Hoagies coming up in the conversation. Originally from a suburb of Philly, AJ Shreffler grew up going to delis, and now he's bringing those memories to life and feeding them to the masses. The pop-ups began when Shreffler was still the sous chef at Bar Dough, but since leaving that gig to go full-time hoagie, he's been slinging sandwiches — which sell out in minutes when pre-orders go live. This summer, he teamed up with Funky Flame, popping up at its temporary outdoor setup in Sunnyside. Now, though, you'll have to follow Little Arthur's on Instagram to get the details on exactly when and how to score a sandwich. He's been rotating through one option at a time, but they're always gigantic, made on bread that Shreffler bakes himself, and insanely tasty.
KEEP WESTWORD FREE... Since we started Westword, it has been defined as the free, independent voice of Denver, and we'd like to keep it that way. With local media under siege, it's more important than ever for us to rally support behind funding our local journalism. You can help by participating in our "I Support" program, allowing us to keep offering readers access to our incisive coverage of local news, food and culture with no paywalls.
Make a one-time donation today for as little as $1.