A Complete Guide to Current and Upcoming Food Halls 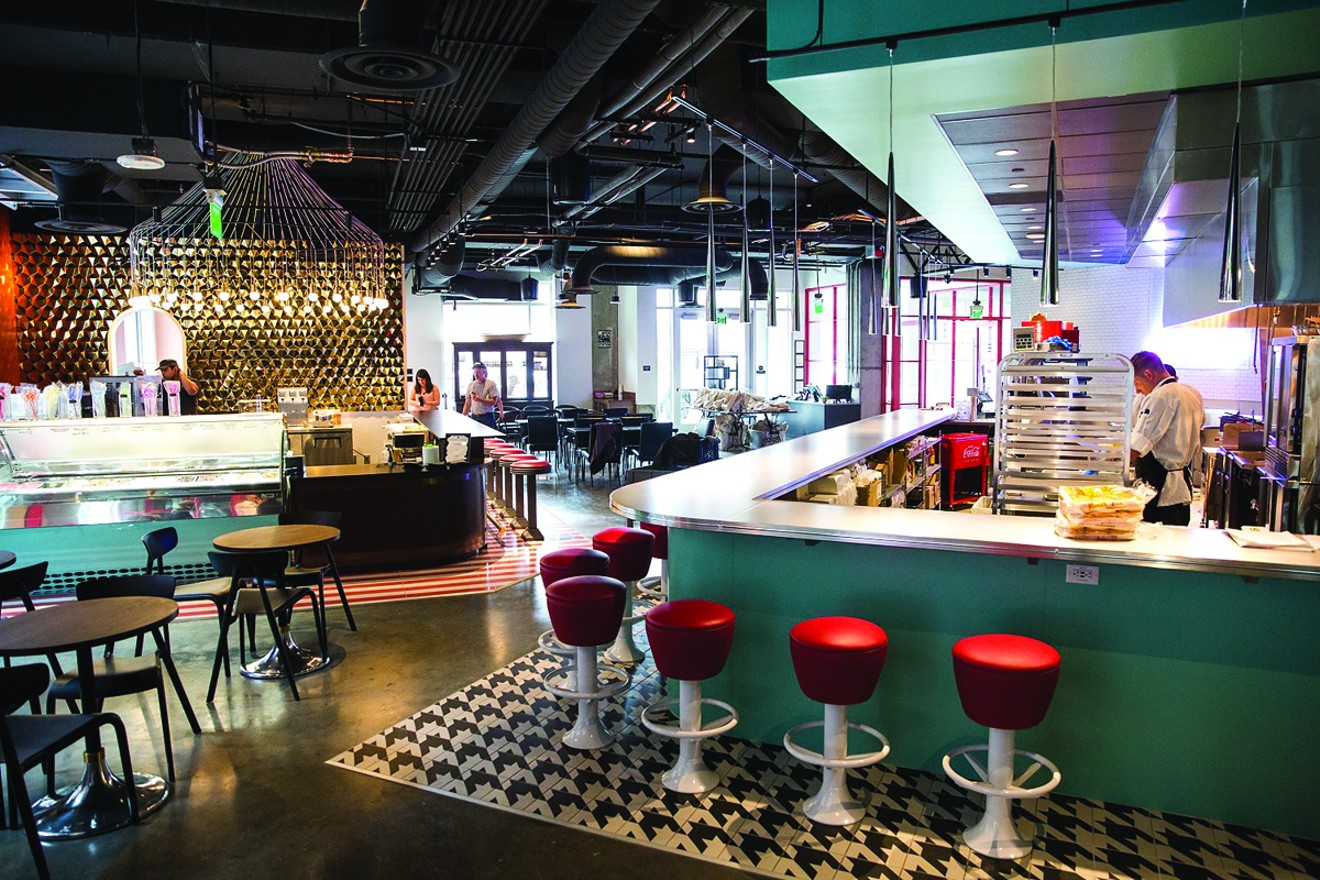 Denver Milk Market is one of many new or upcoming Denver food halls. Danielle Lirette

The Source started the modern food-hall movement in Denver when it opened at 3350 Brighton Boulevard in 2013 with two full-service restaurants (Comida Cantina and Acorn), a bakery (Babettes Artisan Breads), a butcher shop (Meat Head, which was soon replaced with Western Daughers), a coffee shop (Boxcar), a gourmet food shop (Mondo Market), a liquor store (Proper Pour), a craft-brewery taproom (Crooked Stave) and a central cocktail bar (RiNo Yacht Club). Since then, Western Daughters has pulled out and Boxcar has been replaced with Cafe Figurati, while Babettes is moving out later this year to open a larger bakery and pizzeria in Longmont. But right next door (and semi-attached by a footbridge and parking garage) is the Source Hotel & Marketplace, which holds Smok BBQ, Safta and the Woods, a restaurant and New Belgium taproom on the top floor of the hotel (serving beer brewed at New Belgium's ground-floor pilot brewery).

Denver Milk Market is one of many new or upcoming Denver food halls.
Danielle Lirette
Even before the Source, though, the idea of bringing together multiple food and beverage vendors under one roof wasn't new. Shopping malls have been doing it for decades, even if choices are generally limited to national fast-food chains. And from 1968 to 1981, the Yum Yum Tree Food Bazaar offered eight enticing options — Chinese, German, Mexican, barbecue and Italian, to name a few — at its original location on South Colorado Boulevard, and later on Havana Street in Aurora. 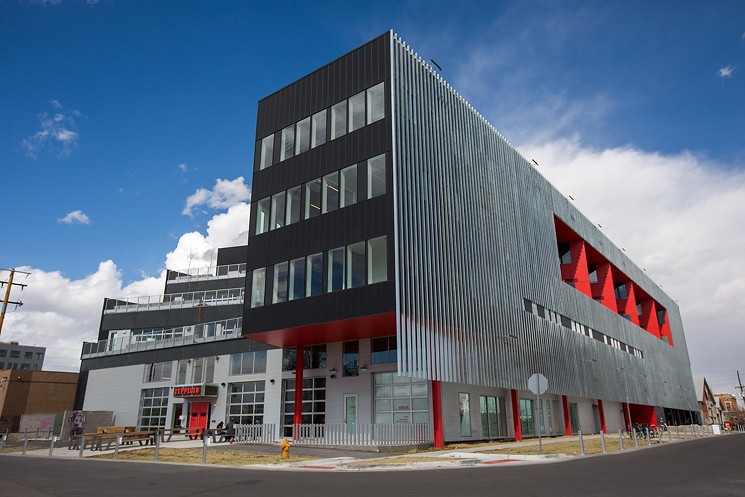 Zeppelin Station opened at the beginning of 2018 in a developing section of RiNo.
Danielle Lirette
The Source has been joined by several new establishments, each with its own vision. Avanti Food & Beverage serves as a restaurant incubator, where vendors sign short-term leases to test a concept before making a leap to brick-and-mortar status. Seven shipping containers on two floors serve as kitchens, with a bar on each floor operated by Avanti. Only two eateries, Pizzeria Brava and Quiero Arepas, remain from Avanti's 2015 debut, but five concepts have become full-on restaurants: Chow Morso, Bamboo Sushi, BorraCho Tacos, Farmer Girl in Lyons (which is now closed) and the Regional, which debuts on October 16 in Fort Collins.

The Denver Central Market opened on Larimer Street two years ago, with ten counters — plus a full bar — offering sit-down dining, grab-and go grub and fresh meat, seafood, bread, produce and pantry items to take home. And earlier this year, Zeppelin Station launched on the ground floor of a new office building in RiNo's still-developing stretch right next to the RTD pedestrian bridge at 35th and Wazee streets. Those looking for international tastes can find South Indian cuisine, Vietnamese banh mi, Korean- and Japanese-inspired fare, and even Montreal-style barbecue. Downtown, restaurateur Frank Bonanno opened Milk Market in June, where customers can choose from more than a dozen options, all conceived by Bonanno. Milk Market also has meat, seafood, deli, fresh pasta and other choices for those looking to cook at home. 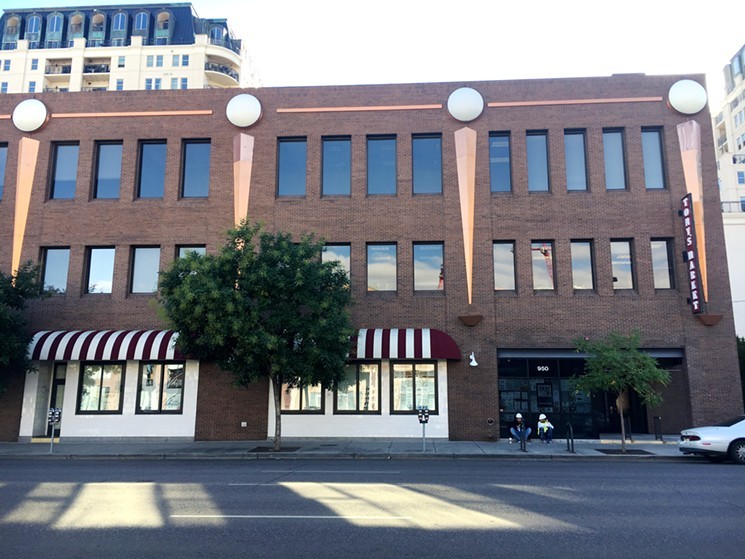 Broadway Market could open before the end of 2018.
Mark Antonation
In Aurora, Stanley Marketplace has a number of locally owned food and beverage options, from the nationally recognized Annette to such walk-up counters as Maria Empanada, Rolling Smoke BBQ and Misaki Sushi, although the Stanley is much more of a complete shopping center (dare we even say mall?), with clothing boutiques, hair stylists and membership gyms in the lineup. Even the refurbished Union Station comes across as a food destination as much as a transportation hub, with several restaurants, two bars and a handful of fast-casual outlets (coffee, sandwiches, ice cream) inside.

That seems like a well-rounded selection of food-based destinations to keep a city busy, but it's only just the beginning. In development, with the possibility of opening before the end of 2018, are Broadway Market, which is taking over the space at 950 Broadway vacated by Tony's Market at the end of last year, and Happy Canyon Wine & Market, where a new Tony's Market will be one of several food and beverage purveyors. So far at Broadway Market, Pizzeria Coperta (from the team that operates Beast + Bottle and Coperta in Uptown) and a Turkish-style doner kebab counter from chef Daniel Asher (of River and Woods in Boulder and the upcoming Ash'Kara in LoHi) have committed, with several other stalls yet to be named.

Even tiny Edgewater is getting in on the act. A former Kings Soopers at West 20th Avenue and Depew Street that has been vacant for years will be redeveloped into a multi-vendor food hall and shopping center called Edgewater Public Market, which could open as early as next summer. Proposed vendors include Rails End Beer Company and several current food-truck operators — possibly Radical Sasquatch Dumpling Company, Barbed Wire Reef, Baba's Falafel and Arepas House. 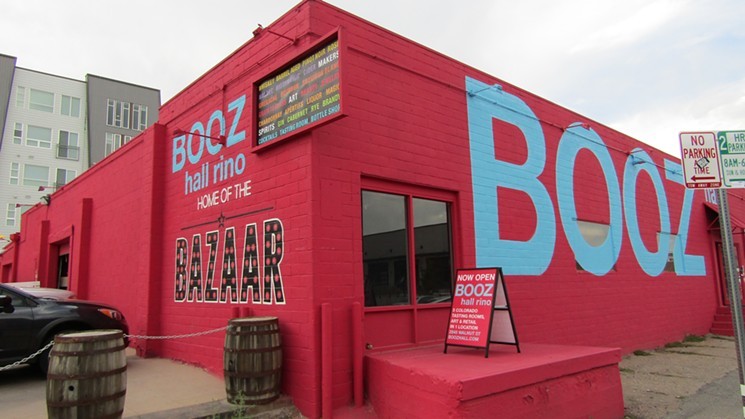 Booz Hall is like a food hall — only for booze.
Mark Antonation
Think we're done? Golden will be the beneficiary of two upcoming conglomerations. Tributary, which is being developed at 701 Twelfth Street by restaurateur/publisher Josh Dinar (also of River and Woods and Ash'Kara), will hold up to eight counters, two of which will be run by Asher, with others including Generous Coffee, Kona Bowls, Woodgrain Bagels and something currently unnamed from Brider chef Chase Devitt. And Golden Mill will take over a former feed store at 1012 Ford Street with several different yet-to-be-named vendors. Tributary could open by the end of the first quarter of 2019, while Golden Mill is expected to take much longer.

While the definition of the modern food hall is still being written, there are already some willing to step beyond a blueprint that's quickly becoming standardized. Rayback Collective in Boulder and its Denver sibling, Improper City, serve coffee, kombucha, beer, wine and cocktails inside warehouse-like structures, with food-truck pads outside. Improper City has been hosting mobile vendors curbside at 32nd and Walnut streets but will debut its spacious beer garden with several built-in truck pads later this month. And just four blocks away, there's an all-booze alternative to the food-hall notion, appropriately called Booz Hall RiNo, where you can find five separate bars from Colorado spirits and wine makers.

If you want your Orange Julius, Cinnabon or Sbarro, you'll still have to head to a mall, but metro Denver will soon be awash in local choices for counter-service grub and market-style shopping — all without plastic cafeteria trays.
KEEP WESTWORD FREE... Since we started Westword, it has been defined as the free, independent voice of Denver, and we'd like to keep it that way. With local media under siege, it's more important than ever for us to rally support behind funding our local journalism. You can help by participating in our "I Support" program, allowing us to keep offering readers access to our incisive coverage of local news, food and culture with no paywalls.
Make a one-time donation today for as little as $1.