The tacos at Teocalli Cocina offer modern ingredients in a classic, street taco style. Tom Hellauer
No, it's not Mexican Independence Day. Nor is Cinco de Mayo really a big holiday in Mexico: It marks the date of the Mexican army’s victory over France at the Battle of Puebla in 1862. But in the U.S., May 5 has become a time to celebrate Mexican culture.

On Saturday, May 7, and Sunday, May 8, Denver's Cinco de Mayo festival will return to Civic Center Park, which is one of many tasty activities on our culinary calendar this week.

But on any day of the year, Denver's home to any number of stellar spots where you can sink your teeth into one of the best foods of all time: tacos. Here are five places to hit up for a taco fix anytime — and all of them will be at Westword's Tacolandia at Civic Center Park on June 4, when you can enjoy unlimited taco samples from over forty taquerias, restaurants and food trucks.
click to enlarge Though Jesse Moya has worked in the service industry for years, Moya's Tacos is the first time he's running his own business.
Moya's Tacos
Moya's Tacos
Pop-Up
“I’m starting from the bottom but am working super hard,” Jesse Moya told Westword last summer when he launched his pop-up business, Moya's Tacos, after years in the industry. Now he's working to grow his business by purchasing a food trailer, and he's kicking off a GoFundMe campaign on May 5 at River North Brewery's Blake Street taproom. Stop by for free tacos from 3 p.m. until they're gone. A video outlining the campaign will debut at 7 p.m., and the brewery will donate $1 from every pint sold from 3 to 9 p.m. to this tasty cause. To find future pop-up dates, follow Moya's Tacos on Instagram, @moyastacos. La Diabla's $3 happy hour tacos.
Molly Martin
La Diabla Pozole y Mezcal
2233 Larimer Street
720-519-1060
Jose Avila's dedication to traditional Mexican dishes and cooking techniques that are uncommon in Denver is just one of the reasons La Diabla was our pick for Best New Restaurant in Westword's Best of Denver 2022. He's a 2022 James Beard Award finalist in the Best Chef, Mountain division for his Sunday-only series, El Borrego Negro, in which he cooks sheep barbacoa Hidalgo-style, in an hoyo (an outdoor pit oven). But you don't have to wait until Sunday to get a taste of Avila's talent thanks to this spot, which he opened in June 2021. Alongside large, filling bowls of pozole, you'll also find tacos of all kinds, including $3 options during happy hour — and yes, you should definitely add bone marrow to them. 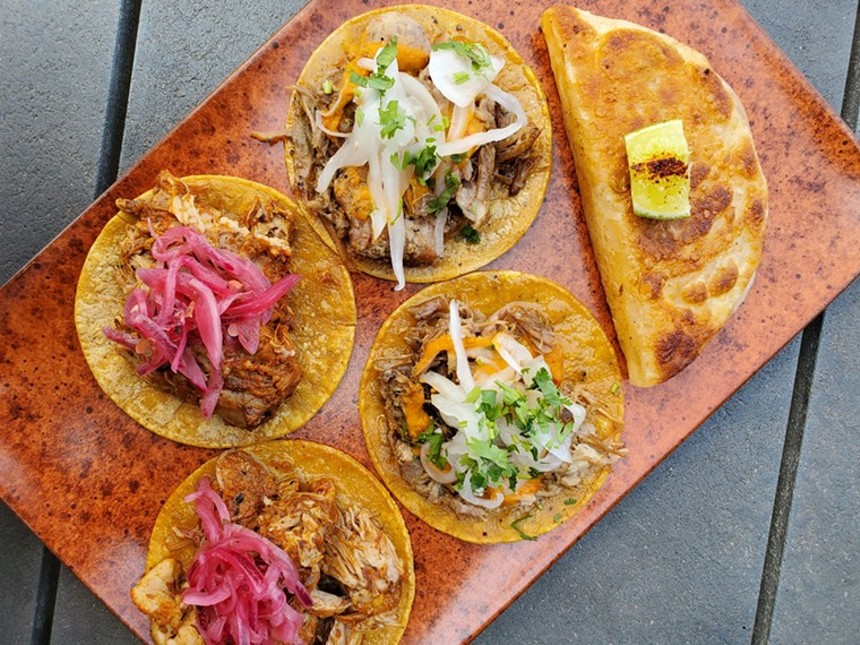 Bellota's tacos are top notch.
Molly Martin
Bellota
3350 Brighton Boulevard
720-542-3721
You can't go wrong with any of the taco options at Bellota, helmed by James Beard nominated chef Manny Barella — but we're particularly infatuated with one: the buttery shrimp tacos. Glancing at the menu, you might overlook this option; the only thing that seems to differentiate it from the other tacos on the list is that it's one of two served on a flour rather than corn tortilla. But along with Chihuahua cheese and onions, it's got two components that step up the decadence level: tomato cream, and the shrimp butter that Barella brushes on the outside of the tortilla before frying it golden-brown. Because the shrimp taco is so indulgent, you'd be smart to pair it with a carnitas taco. This version is loaded with pork that's slow-roasted (not boiled, which Barella says he sees too often) with another secret-ish addition: condensed milk, a traditional ingredient that helps caramelize the meat. The taco is topped off with a refreshing mix of onion, cilantro, lime and chile de arbol salsa.

Los Mesones is one of the last Mexican restaurants on this stretch of Colfax.
Jay Vollmar
Los Mesones
3643 West Colfax Avenue
303-446-2707
Hector Hugo Soto and his wife, Adriana Chávez, opened Los Mesones in 2006, and since then have welcomed a cast of regulars who frequent this small spot for baked goods like colorful cookies, flan and tres leches; cocktails including micheladas, margaritas and palomas; and a large menu of eats including super-cheesy chiles rellenos and, of course, tacos. The carnitas are a popular option, but there are a slew of options, from adobada and chorizo to lengua, liver and tripe.