Enjoy unlimited beer (and not just from Left Hand) at Hops and Handrails. Courtesy of Left Hand Brewing
Obviously, gentle reader, you appreciate the finer things in life — say, a vintage glass of wine, enjoyed with friends in a refined restaurant. Too bad, because nothing that genteel is happening this weekend. Instead, you'll be pairing your beer with professional wrestling, your ales with handrails and your pints with puppies. Here are six of the best down-and-dirty food and drink events in Denver over the next few days. 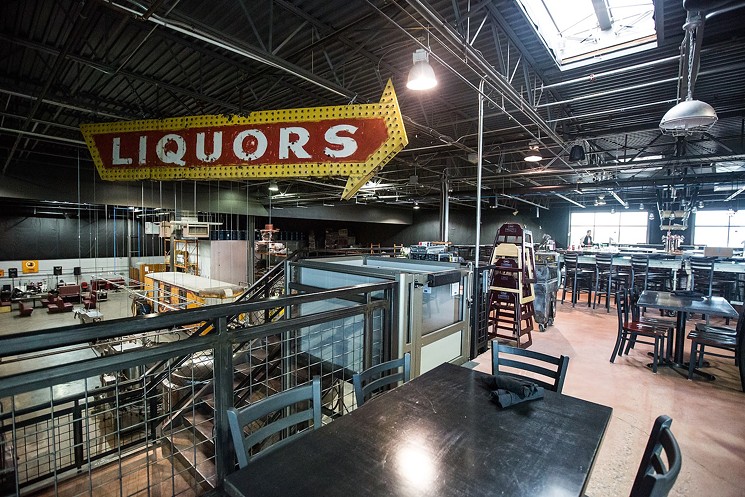 Rackhouse Pub becomes a wrestling ring on Friday, March 23.
Danielle Lirette
Friday, March 23
If you binged your way through Netflix's GLOW in a weekend — or if you're old enough to harbor nostalgic fondness for Mt. Fiji and Babe the Farmer's Daughter — and haven't been able to scratch that wrestling itch since then, you're in luck. Rocky Mountain Pro Wresting is bringing the ring to Rackhouse Pub, 2875 Blake Street, with Brews and Bodyslams on Friday, March 23. The $10 admission ($15 at the door) entitles spectators to two-for-one drink specials as well as up-close views of moonsaults, masks, makeup and muscle busters. The choreography kicks off at 9 p.m.; get your ticket at eventbrite.com before Matilda the Hun takes you out. 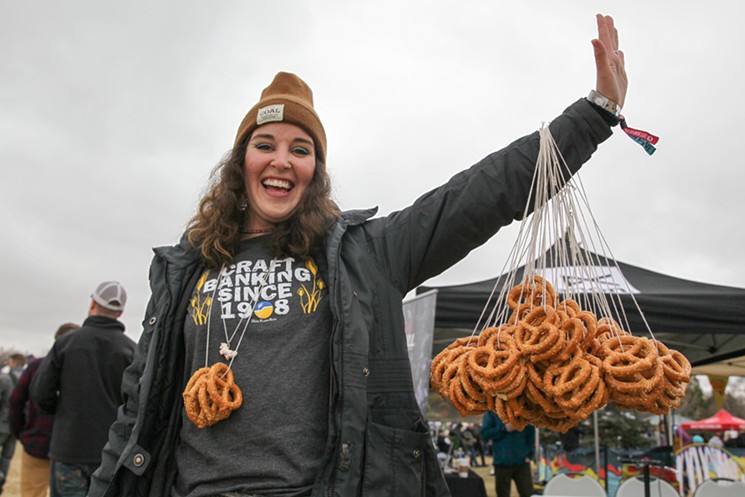 Don't forget your pretzels at Hops and Handrails.
Brandon Marshall
Saturday, March 24
If you think you're the next Chloe Kim or you like beer (only one of those is likely), you won't want to miss Hops and Handrails, the mashup of beer festival and snowboard competition that's entering its sixth year. This year, more than sixty breweries will converge on Longmont's Roosevelt Park, 700 Longs Peak Avenue, where they'll be pouring over 150 beers on Saturday, March 24, and Sunday, March 25. The suds start flowing at noon both days, with a ski and board competition on Saturday afternoon and family-friendly sledding on Sunday afternoon. Spring for the VIP pass and you'll get early entry at 11 a.m. plus the opportunity to sit in a hot tub with a bunch of strangers in between beers. Get advance tickets (ranging from $10 to $125) at lhbfoundation.org, as prices go up the day of the event.

Persian New Year isn't just celebrated in Iran, and it doesn't just go by one name (transliteration makes the spelling a little tricky). We wrote about Boulder Dushanbe Teahouse's Navruz dinner last week; this week, those who didn't make it to that celebration have a second opportunity to enjoy the holiday at the inaugural International Nawroz Festival on Saturday, March 24, at the Evie Garrett Dennis Campus, 4800 Telluride Street. This gathering of Iranians, Afghans, Tajiks, Albanians, Baha'is and Zoroastrians represents the cultural and religious diversity of the holiday that's celebrated across the Middle East, central and western Asia and the Balkans. From 11 a.m. to 5 p.m., there will be music, dancing, poetry readings and food to mark the occasion. Admission to this unique event is just $10; find out more on the event's Facebook page.

It's the weekend, so we know you were planning on dressing up like a cat at some point — because we do it, too! Why not exercise your feline fetish in public by joining the Cat Crawl, a purr-fect time to explore the bars of Capitol Hill while donating to a good cause on Saturday, March 24. Get your $20 ticket in advance at eventbrite.com, then show up in your best kitty costume at 8 p.m. at Bang Up to the Elephant (1310 Pearl Street). Additional stops include Kinga's, X-Bar and Blush & Blu; free drinks at each bar are included in the price of the ticket, as well as specials on additional drinks (which means you won't have to slurp milk from a bowl). Your twenty bucks also goes toward Rocky Mountain Feline Rescue, which does not rescue drunk people in cat costumes — so plan your transportation in advance.

Chain Reaction's beers are not served potluck style — thank God.
Courtesy of Chain Reaction Facebook page
Sunday, March 25
Some people love potlucks: The community, the sharing, and the sense of friendship and connection leave them all warm and fuzzy. Others are more concerned with the community of bacteria lurking in that lukewarm casserole, the sharing of germs, the sense that your friend's cat might have been prowling around on their kitchen counter and nosing their mise en place while they were whipping up that dessert. If you're the second type, stop reading now, because Chain Reaction Brewing's Second Annual Mac and Cheese Off on Sunday, March 25, is the purest form of potluck: a food event bringing people who enjoy the same beers and sharing their home-cooked food together. Everyone loves macaroni and cheese, and that's what will be served. Just $10 will get you in the door (either as a competitor or a taster) from noon to 4 p.m., and prizes will be awarded for the three best gooey noodle dishes. The taproom, at 902 South Lipan Street, will also host live music, a sloppy Joe bar, cookies and a food truck, just in case you're still hungry after the mac attack. Find out more at the brewery's Facebook page.

It's officially spring, and the birds and the bees are heeding their animal instincts. It's not just avians and apians that are getting it on, though; so are canines, and that's why Moms and Mutts, a nonprofit animal rescue focusing on pregnant and nursing dogs, is holding an adoption event at Zuni Street Brewing on Sunday, March 25. From 2 to 5 p.m., moms and their litters will be at the brewery, 2355 West 29th Avenue, for adoption and just plain playtime, plus a buck will go to the rescue for every pint sold. Visit Zuni Street's Facebook page for details about the event and to see pictures of the adorable attendees (we see you, Augusto). Make sure you come ready to cuddle, and if you think you might be interested in taking home one of the woofs, make sure you complete an adoption application before you show up.