The Eight Best Events on the Culinary Calendar This Week Celebrate the important things in life at the Cruise Room. Kenneth Hamblin III
This week boasts holiday treats from all kinds of traditions, a kitchen aristocrat, raucous celebrations of the 21st Amendment, a cooking competition and a beer pairing of a very different sort. Keep reading for details on those (and more!) food events over the next five days, plus four future food and drink fetes. Little Man fans don't stop eating ice cream just because it's wintertime.
P Murray
Monday, December 3
In an odd but delicious conflation of Christmas and Hanukkah, Little Man Ice Cream, 2620 16th Street, is celebrating winter holidays with its Pajama Christmas Carols and Hora Around the Menorah event on Monday, December 3. The Clauses, under-dressed carolers and ice cream represent Christians; Hanukkah candles and latkes go to bat for the Jewish holiday. In our opinion, ice cream is an equal match for crispy potato pancakes (no matter the season), so join the festivities and sample both from 6 to 8 p.m. Details are up now on Little Man's Facebook page.

Say you're young at heart when it comes to Christmas desserts (you love sugar cookies) but also suffering from early-onset grumpiness (you don't want to spend your cookie-decorating time with squalling, sticky-fingered kids who leave a wake of destruction and cookie crumbs wherever they go): What to do? In a sea of holiday cookie decorating classes aimed at parent and child, opt for Hotel Teatro's holiday workshop on Monday, December 3. For $25, adults can relax in the Study of the hotel, 1100 14th Street, next to a roaring fire while watching cookie-and royal icing-making demos as well as getting tips for elaborate decoration; you'll leave with recipes and all the ingredients needed to bake and ice some very grown-up cookie creations. Tickets are on sale at eventbrite.com, and be sure to visit the hotel's Facebook page for other holiday workshops throughout the month.


Tuesday, December 4
The Food Network built its brand on aspirational cooking and eating — the idea that you, too, could have beautiful family and friends show up to your spotless house (or lush garden, during the summer months) for an immaculate and very sophisticated dinner party, if only you cooked with ingredients like "good-quality butter" and made your own marzipan for dessert. The queen (or at least contessa) of this fairy-tale kitchen? Ina Garten, who is taking the stage on Tuesday, December 4, at the Paramount Theatre, 1621 Glenarm Place. She'll discuss the writing of her eleven cookbooks and the filming of her show The Barefoot Contessa, followed by an audience Q&A. A few tickets for the 7:30 p.m. show are still available for $49.50 at Altitude Tickets. 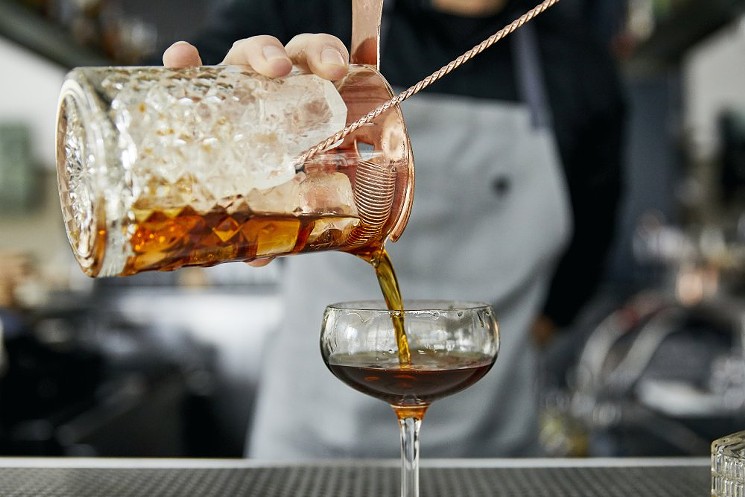 Celebrate the most important day in American history — Repeal Day — with pre-Prohibition cocktails at Citizen Rail.
Courtesy Citizen Rail
Wednesday, December 5
If you haven't made it to Comal yet — and unless you work near the Taxi Building, 3455 Ringsby Court, chances are you haven't, since it's only open for weekday lunch — you've got a rare opportunity to grab dinner at the eclectic Mexican/Syrian joint on Wednesday, December 5. From 6 to 8:30 p.m., the restaurant will serve its final Impact Dinner of 2018, with proceeds benefiting nonprofits Focus Point Family Resource Center and Colorado Village Collaborative. For $75 (tickets are on sale at eventbrite.com), diners will get a five-course Mexican feast with wine and cocktail pairings; highlights of the meal promise to be fried chicken in a pepita and tomatillo sauce and and consomme de res, braised beef short rib served in a rich bone broth over rice. If you're feeling extra-hungry, chef's-counter tickets are available for $125 and include additional courses of king crab, scallops and winter truffles, but hurry: Only two counter tickets are left for this dinner.

It's true that December is the most wonderful time of the year — but for some of us, it's not because the holidays are bearing down with the speed of your family going from Christmas-picture happy to drunk and dysfunctional. No, it's because on December 5, 1933, the Eighteenth Amendment was repealed and Prohibition ended, giving all of us the Constitutional right to get snockered. A trio of Denver establishments are marking Repeal Day with drink specials, notably the Cruise Room (1600 17th Street), which has been continuously open since that momentous day and offers the best deal in town: a 35-cent Tom Collins, Sazerac or Martini, or fifty-cent Sidecar or Old Fashioned (one drink limit) from 4:30 to 7 p.m. Citizen Rail (1899 16th Street) will offer a special menu of pre-Prohibition cocktails all night, with happy hour and live music starting at 9 p.m., and Hearth & Dram (1801 Wewatta Street) starts its party at 9 p.m., with 1930s-inspired apps and two drinks for $45; visit the restaurant's Facebook page for details and reservation info. Make this Repeal Day one for the books, lest we all forget the reason for the season. 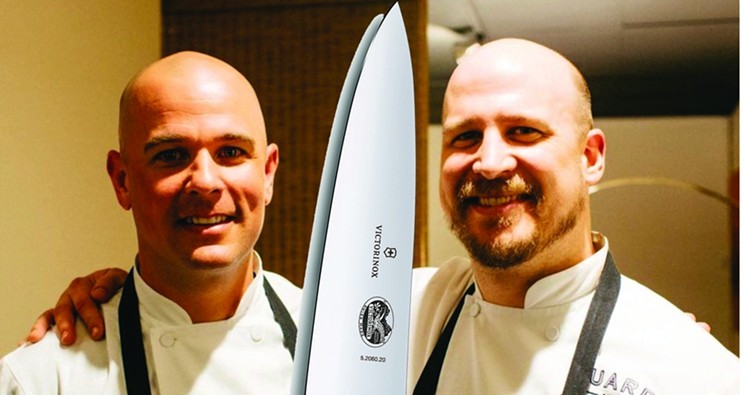 These two Denver chefs will battle it out at Mister Tuna.
Courtesy TAG Restaurant Group
Thursday, December 6
You can sit around in your yoga pants and watch reruns of Chopped, or you can get cleaned up and step out for a night of food and competition Denver-style. On Thursday, December 6, Mister Tuna (3033 Brighton Boulevard) is hosting its Chef Throw Down, where chef Brent Turnipseede of Guard and Grace and chef Mike Mayo of the brand-new Morin will battle it out in a rapid-fire culinary competition. This will be a late-night showdown beginning at 10 p.m., when the chefs will create dishes using three surprise ingredients. The event is sponsored by Colorado Sake Co.,and a portion of each ticket sale will be donated to We Don’t Waste. Tickets, which include bar bites during the event, are $10 if you buy them in advance at chefthrowdown.nightout.com, or $12 at the door. Drinks will be extra, so bring a little cash. Bamboo Sushi wants you to help celebrate its first year in Denver.
Mark Antonation
When is one-year-old sushi a great thing? When it's the one-year anniversary of one of Denver's top sushi restaurants. Bamboo Sushi, at 2715 17th Street, is celebrating its first birthday — and you're invited. On Thursday, December 6, the restaurant is serving a special seven-course menu described as "traditional Japanese techniques and flavors, reimagined in a modern way." Dishes will be seafood-focused and not on Bamboo's regular dinner menu, so the $80 price per person (with separate drink pairings for an additional $30)  will get a unique dining experience. Seatings will be at 6 and 8 p.m., and tickets are available on eventbrite.com. Make you're reservation online and Bamboo will hold a complimentary bottle of bottle of sake from Colorado Sake Co.

Friday, December 7
If you're a regular reader, you already know how we feel about the ubiquitous beer and dessert pairing. Beer and cookies! Beer and doughnuts! Beer and popcorn! They all get to be a little too much (the only one to escape our ennui: beer and pie, because pie). But how about beer and rock opera? On Friday, December 7, local band Lost Walks is staging Wolf, Woman, Man paired with beer samples from TRVE Brewing and Ratio Beerworks. The songs tell the story of a couple who move into a remote wilderness, only to come face to face with a menacing animal and their own demons; the brews are thematically tied to the songs. LFX Filmworks and Events Space, 1701 31st Street, is hosting the show, which starts at 8 p.m. and benefits Rocky Mountain Wolf Project. Find details and tickets ($25) on the event's Facebook page and hear the music at Lost Walk's website.