Tom's Urban and Tivoli Brewing collaborated on a new brewery-restaurant at DIA. Sarah Cowell
Things are taking off at Denver International Airport, with a new mini-version of Denver Central Market launching in Concourse A and a version of Tom's Urban, complete with a brewhouse from Tivoli Brewing, now open inside the Westin Hotel at the south end of Jeppesen Terminal. Denver Central Market boasts a Sushi-Rama (though without the sushi chain's standard conveyor-belt delivery system), Vero Pizza & Pasta, SK Provisions and Culture Meat & Cheese, all with grab-and-go options for travelers in a rush. The space also has a central coffee station and bar. For a full rundown of the Tom's/Tivoli partnership, read Beer Man Jonathan Shikes's full preview.

In closings, Govnr's Park Restaurant & Tavern, a staple at Seventh and Logan for more than forty years, will pour its last beers on Sunday, November 11, with a sendoff party scheduled for Saturday, November 10. Say goodbye over 22-ounce pours of Big Nose beers and pretend it's still 1997.

Here's our complete list of every bar and restaurant opening and closing for the week starting November 5, 2018, plus links to our original coverage of current and upcoming openings and closings. 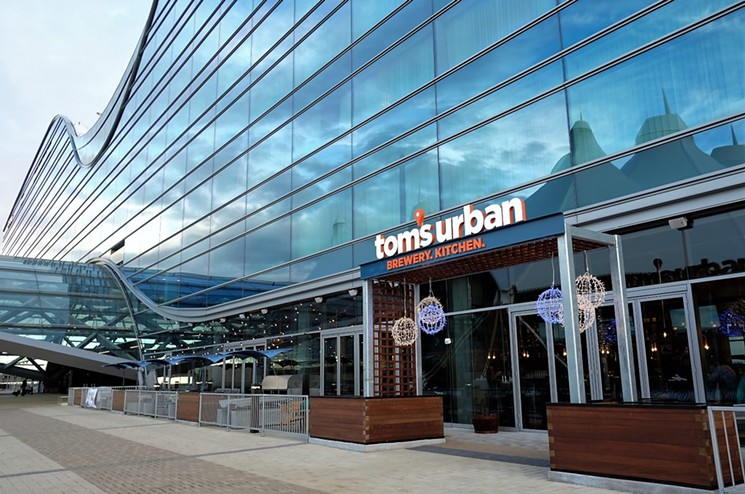 Welcome to Denver International Airport. May we pour you a beer?
Sarah Cowell
"Tom's Urban Opens at Airport Today With an Operating Tivoli Brewhouse"

Beckon on the left, Call on the right.
Mark Antonation
"Beckon Will Unveil Its Seventeen-Seat Chef's Counter on November 21"

While the fate of Fate Brewing was a sad story, the opening of Tom's Urban Kitchen and Brewery at the airport capped two years of waiting. It focuses on craft beers, including one brewed right on site by Tivoli; brewing began on November 5.

Have you spotted any openings or closings that aren't on this list? Let us know with a comment, or send us an email at [email protected].
KEEP WESTWORD FREE... Since we started Westword, it has been defined as the free, independent voice of Denver, and we'd like to keep it that way. With local media under siege, it's more important than ever for us to rally support behind funding our local journalism. You can help by participating in our "I Support" program, allowing us to keep offering readers access to our incisive coverage of local news, food and culture with no paywalls.
Make a one-time donation today for as little as $1.