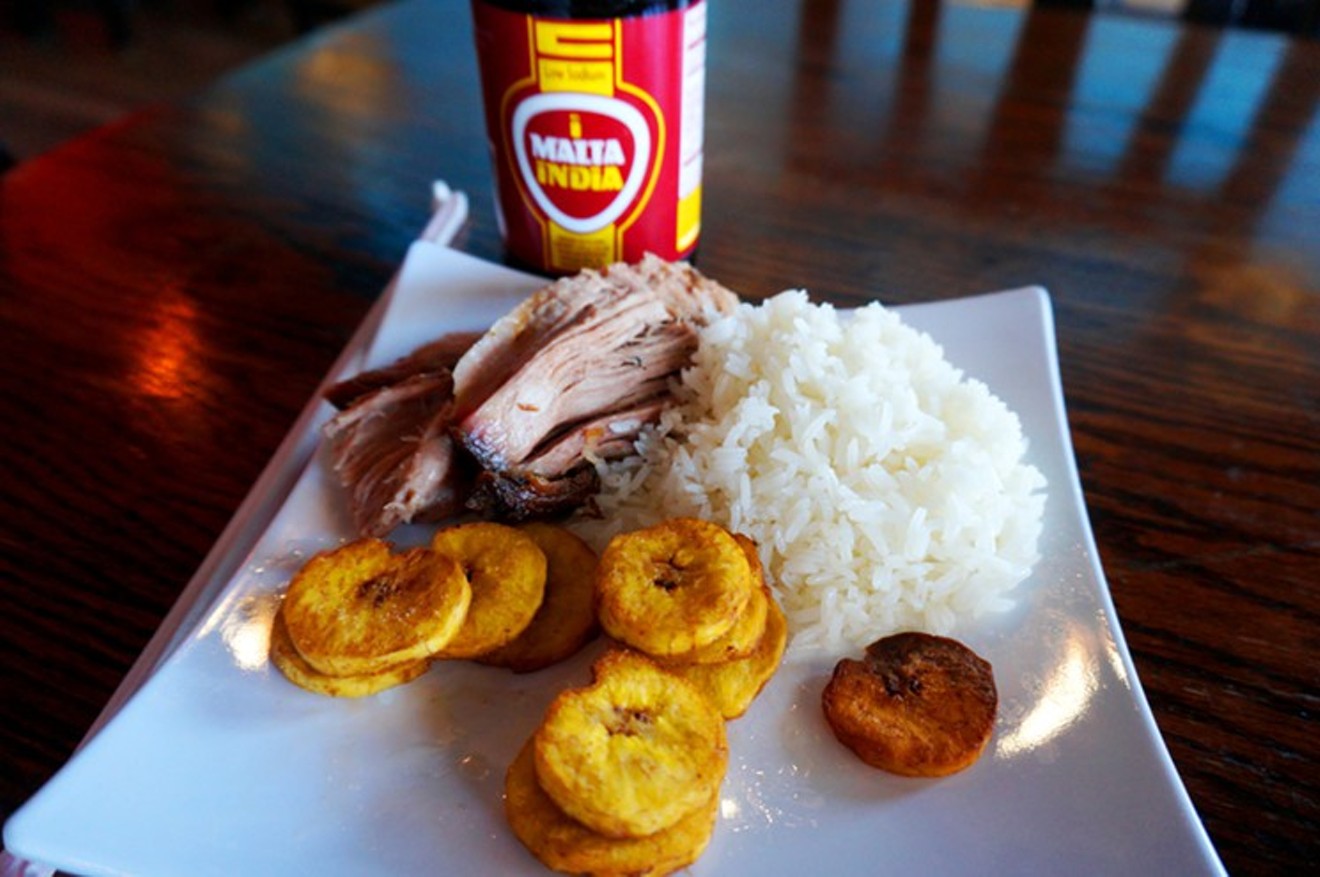 Translating street food to a restaurant can be tough, but vendors like El Coqui D'Aqui have made it work. Mark Antonation
The street-food business can be fast and chaotic; customers line up for hot-ticket grub while cooks sweat it out inside sweltering food trucks or sling food as fast as they can from mobile carts. But transitioning to a brick-and-mortar restaurant can be even tougher, since building a customer base and attracting new guests every day to one location takes time, patience and hard work. But these ten vendors have made it work, turning trucks and carts into unique and exciting eateries. Here are the ten best Denver street-food vendors that have made the move to full-on restaurants.

Biker Jim's Gourmet Dogs
2148 Larimer Street
720-746-9355
Jim Pittenger practically wrote the book on how to turn a mobile cart into a growing restaurant business. He started out slinging hot dogs on the 16th Street Mall, attracting the likes of Anthony Bourdain with unusual wild-game sausages and a signature topping combo of cream cheese and Coca-Cola onions. The accolades continued after Pittenger launched his Ballpark restaurant, earning visits from nearly every big food TV show and publication. Biker Jim's carts and trucks can still be seen around town, and the dogs are now being served at Coors Field and Red Rocks Amphitheatre, cementing the brand as a true Denver original. 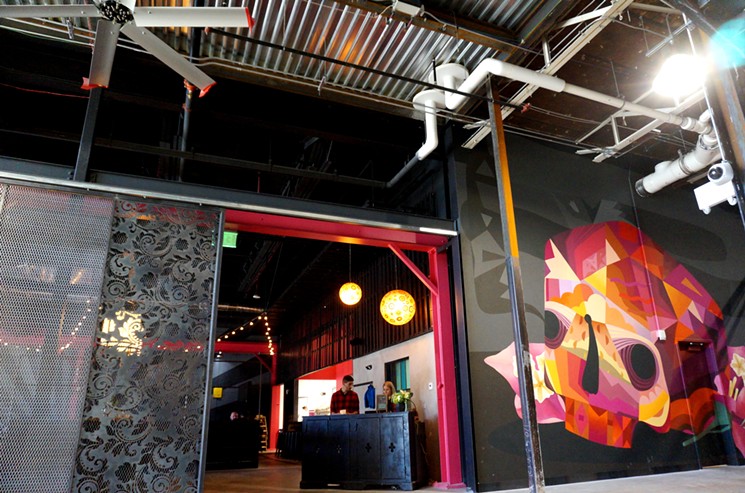 Comida Cantina's Stanley Marketplace location.
Mark Antonation
Comida Cantina
3350 Brighton Boulevard, 303-296-2747
2501 Dallas Street, Aurora, 303-484-1632
Rayme Rosello launched the pink Comida truck in 2010, peddling tacos and other Mexican eats in Boulder County before tackling Denver. Now with restaurants at the Source and Stanley Marketplace, Comida Cantina is in the spotlight of two of the city's top dining destinations. The food's as good as it was when the truck was rolling through town, but the restaurants are even better — because now we can pig out on tacos while sipping Comida's thirst-quenching margaritas and other tequila-infused concoctions. 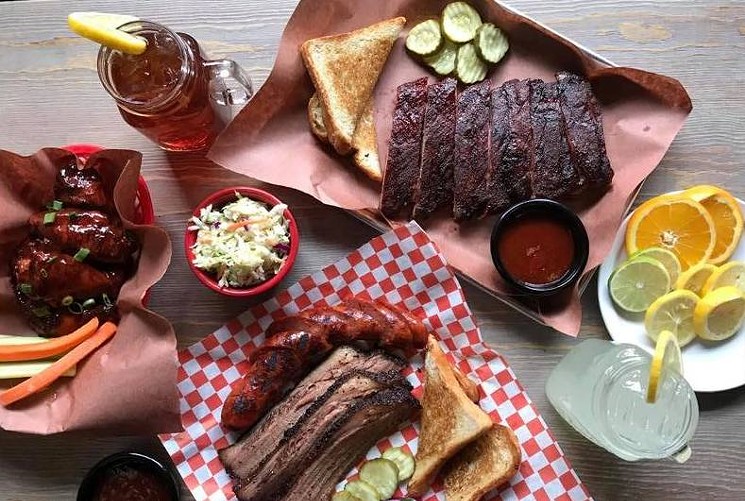 Now you can enjoy Cub's Q barbecue inside a modern restaurant.
Facebook/Cub's Q
Cub's Q
6955 South York Street, Centennial
303-794-5400
We first spotted the bright-red Cub's Q trailer in 2015 in a vacant parking lot on South Broadway; the smell of wood smoke drew us in for some top-notch Kansas City-style barbecue. Greg and Linda McCubbin moved their setup to the south suburbs for another year or so before opening in the Streets at SouthGlenn last summer. Racks of ribs, piles of pulled pork and succulent slices of brisket await barbecue seekers looking for something good in Centennial — and the McCubbins have added a great list of burgers alongside the smokehouse specialties. 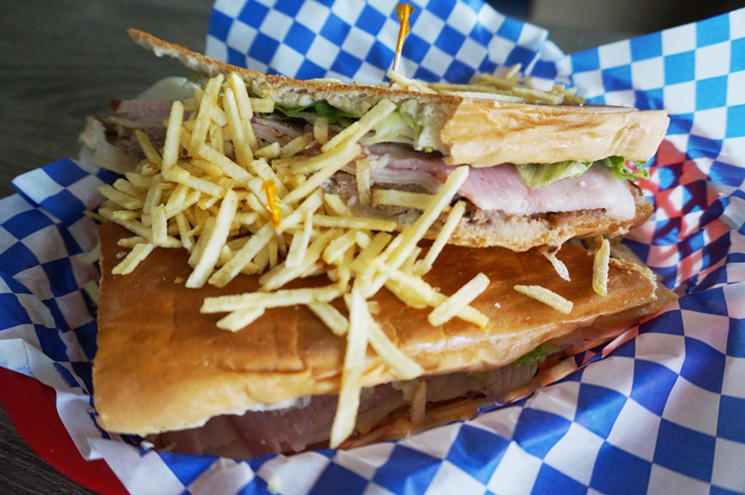 El Bohio's Cubano is stuffed with slow-roasted pork, ham and lots of other good stuff.
Mark Antonation
El Bohio Criollo
2080 Youngfield Street, Golden
720-840-0342
Federal Boulevard is home to innumerable taco trucks, but Cuban food is a rarity. So when the El Bohio Criollo food truck popped up in 2016, you can bet we pulled over for some Cubano sandwiches stuffed with roast pork, fried plantains and an uncommon (at least outside of Miami) sandwich called a frita Cubana. The little truck soon disappeared, but to our surprise, the Bohio Criollo name reappeared in a quiet Golden strip mall less than a year later. Now you can get ropa vieja, picadillo and other Cuban specialties, along with those tasty sandwiches, every Monday through Saturday without having to track down that truck.

El Coqui D'Aqui
2236 South Colorado Boulevard
303-907-4824
Puerto Rican cuisine is a rarity in Denver, too, but mofongo, roast pork, rice with habichuelas (Puerto Rican beans) and other island dishes were the specialty for the on-again, off-again Coqui D'Aqui food truck. Alex and Diana Rivera pulled in permanently to a cozy space on South Colorado Boulevard, turning it into a colorful, beach-style Puerto Rican eatery. El Coqui is now open from noon to 8 p.m. Thursday through Sunday, giving us a little something special to look forward to at the end of the week.