"The pepper is mightier than the sword." Fuel & Iron
Two Denver real estate brokers will bring the culture of Pueblo to Denver with Fuel & Iron, a new bar opening April 28 at 1526 Blake Street. The bar’s food, drinks and decor — which co-owner Zach Cytryn describes as "industrial" — are all inspired by the southern Colorado city.

Cytryn and co-owner Nathan Stern purchased the LoDo location, which was most recently occupied by Brass Tracks, just before the end of the year, and have been hard at work flipping the place ever since. When guests arrive, they’ll notice new seating, lighting and a bronze bar.

In addition to this new venture into the food and drink business, Cytryn and Stern are real estate brokers specializing in restaurants, bars, coffee shops and the like. Their affinity for Pueblo comes from Stern’s early days post-grad when he spent time in the city for work and fell in love with the people, food and culture. “Nathan’s been a big believer in Pueblo — P-Town — for the past decade, and he got me to go down there with him,” Cytryn recalls. “Like most people in Denver, I didn’t really know too much about Pueblo, and when I got there, I kind of realized how awesome it was. The architecture was really cool, the people are so welcoming and friendly and warm, the cuisine — there are so many local farms in Pueblo, and all these really fresh ingredients that can be utilized.”

The two have a goal of getting Pueblo on the radar of Denverites, with their menu, a massive mural and historic photos intended to spark conversation and interest in the city.

The menu will consist of sharable bar food like charcuterie and sliders, but will also include a take on the Slopper, a Pueblo staple that is essentially an open-faced burger smothered in green chile and cheese. They also plan to source some of the food from Pueblo, including meat from Gagliano’s Italian Market & Deli and cheese from Springside Cheese. Sloppers are on the menu at Fuel & Iron.
Fuel & Iron
Cytryn also hinted that Fuel & Iron will be pouring signature cocktails and beer that fit the theme. “The Pueblo chile is a big deal,” he teases. “We’re also going to do our own beer, as well. So, we’re going to have Fuel & Iron-branded beer, and it’s going to be five different beers.” While the team is still firming up the beer menu, they’re hoping to offer a porter, a saison and a few IPAs — one “potentially with some Indigenous hops that are native to Pueblo.”

At the front of the bar is a floor-to-ceiling mural, created by Pueblo artist Dan Levinson, depicting a diverse group of people sitting around a table with a steel mill looming in the background. “This is the Pueblo steelworkers getting off work, getting a bite to eat and a drink, coming together over food and alcohol, which is why we love food and alcohol so much,” Cytryn describes. “It’s the universal language. That’s what brings people together.”

Even the name Fuel & Iron is a tribute to Pueblo, serving as a reference to the area’s steel mills. “We also feel like both ‘fuel’ and ‘iron’ could be words associated with food, so it’s kind of a cool way to pay homage to the industrial past and also bridge to the agricultural future that we’re trying to bring to Pueblo,” Cytryn says. 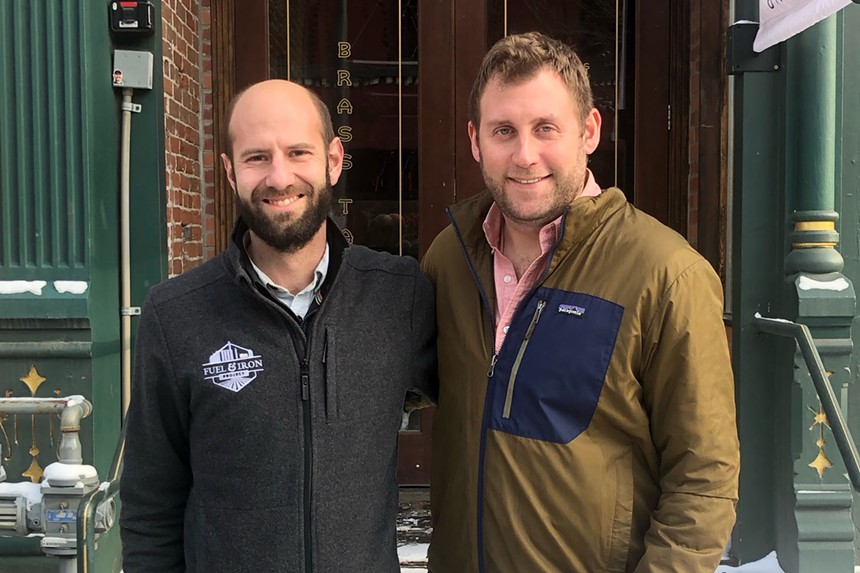 Additionally, the upstairs mezzanine will eventually be home to Hell or High Water, a haunted gay pirate ship-themed tiki bar from the team behind Edgewater's the Electric Cure.

Considering that Cytryn and Stern found success as real estate brokers, their new venture prompts the question: Why open a bar?

“We were both generalists to start our careers. We were doing every kind of deal that came to us — industrial, retail, office, cannabis — and realized it was tough to be good at everything, and if we had one niche, if we were focused on one thing, we could get really good at that one thing,” Cytryn explains. “Our favorite assignments were always working with the restaurateurs, the coffee shops, the breweries, the bars. We really feel like those types of places are what gives a city character.” They were inspired to create a bar “to help build the state that we love, a place that we'd love to go to.”

This fall, Cytryn and Stern will also open the Fuel & Iron food hall in Pueblo, using an incubator model to provide kitchen space to up-and-coming chefs. It will also have 28 affordable-housing units on the upper floors and, eventually, an urban farm and land for additional multi-family housing.
KEEP WESTWORD FREE... Since we started Westword, it has been defined as the free, independent voice of Denver, and we'd like to keep it that way. With local media under siege, it's more important than ever for us to rally support behind funding our local journalism. You can help by participating in our "I Support" program, allowing us to keep offering readers access to our incisive coverage of local news, food and culture with no paywalls.
Make a one-time donation today for as little as $1.