Keep an Eye Out for Colorado's Most Underrated Vegetable 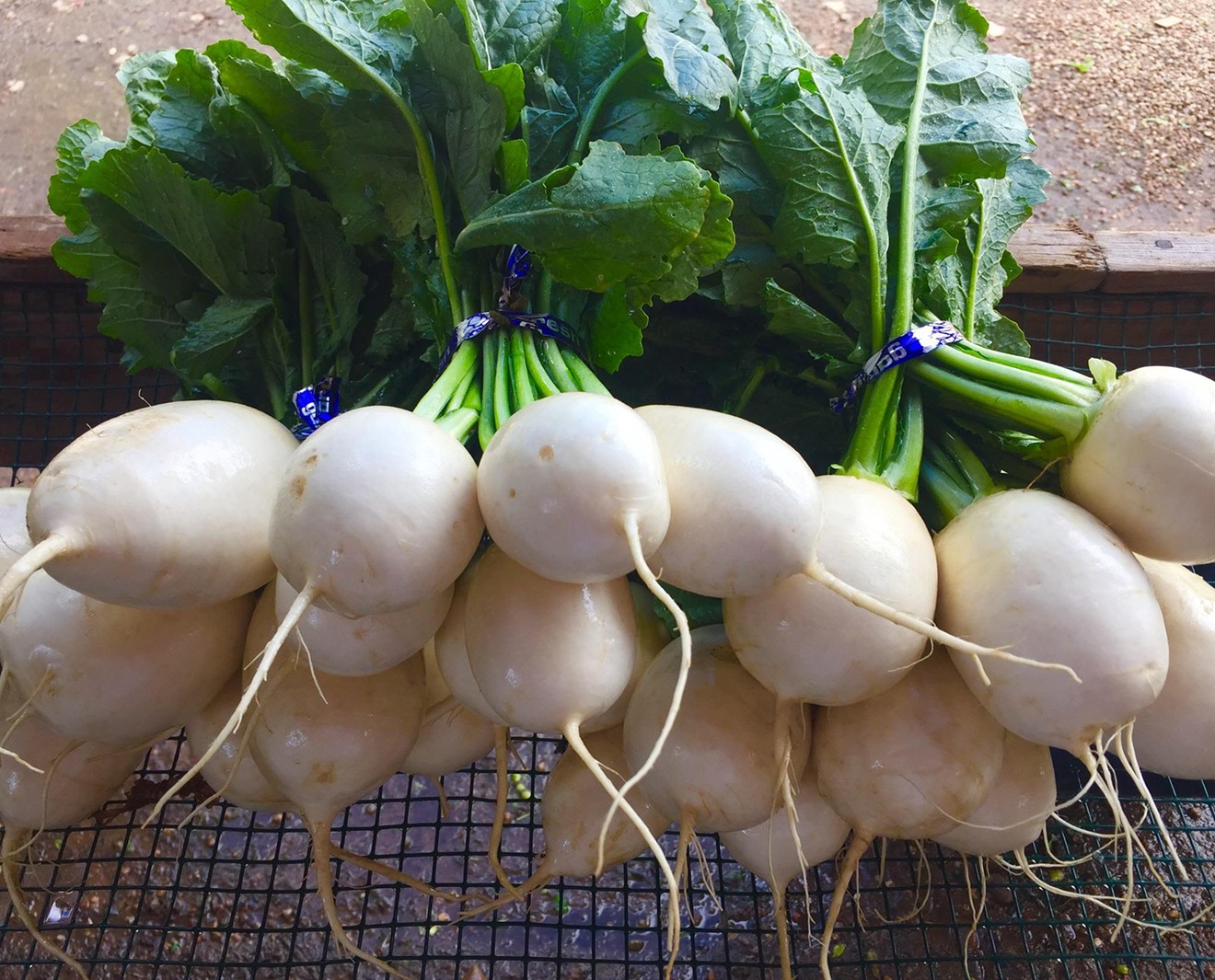 These are definitely not your grandparents’ turnips. Mark Guttridge
Every Thanksgiving, my mother prepares a small side of mashed turnips for my dad. He is literally the only one at a table of often more than twenty guests who eats this with his turkey. Without much fanfare, my father enjoys this side all to himself, a nostalgic dish harking back to his youth — a solitary, happy memory rooted in the Irish immigrant food his own parents served him.

At Thanksgiving, and otherwise, the turnip has long been cast aside by those seeking culinary excellence, never coming close to achieving the elite sexy-vegetable status of tomatoes, asparagus or even beets nowadays. During culinary school, we used turnips frequently as knife fodder to practice tournant and macedoine cuts. Their imperfect trim would end up as buffet-style turnip mash for the school meal (with barely any students indulging in them).

Even those same Irish immigrants cast aside their traditional turnip in favor of the extra-large American pumpkin, thus beginning the custom of carving jack-o'-lanterns at Halloween in the United States. These are purple-top turnips, a member of the Brassica family, slightly sulfuric in flavor, with a texture akin to cardboard until you most likely boil or roast them. Often seen as a pre-war relic that our parents’ parents grew up eating and preserving, the turnip has never really been given its due.

Enter the hakurei turnip. Also known as Tokyo turnips and Japanese salad turnips, this smooth, eggshell-white root vegetable, while still a turnip, stands in stark contrast to its purple-top cousin. It has a mild flavor, natural sweetness and crunchy texture. When cooked, hakurei are buttery and creamy. However, their superhero powers shine when they're eaten raw, with a flavor profile that is sweet and juicy, like Honeycrisp apples, and crispy, like the best radishes and celery.

Hakurei turnips also happen to grow remarkably well on Colorado’s Front Range, with multiple local farmers naming it among their most prized harvest. Its omnipresence at farmers' markets has also made it a mainstay with many local chefs; it's a hallmark of the seasonally focused menus at my restaurants, Apple Blossom (822 18th Street) and Coperta (400 East 20th Avenue). The varietal actually has two seasons in Colorado — late spring and early autumn — and the two different plantings have subtle nuances we love to feature in our dishes. While these turnips will more than likely never have the mass appeal of the aforementioned vegetable celebrities, I cannot help but come to the conclusion that hakurei turnips could be one of our state’s most important vegetable crops — and certainly one of its most underrated 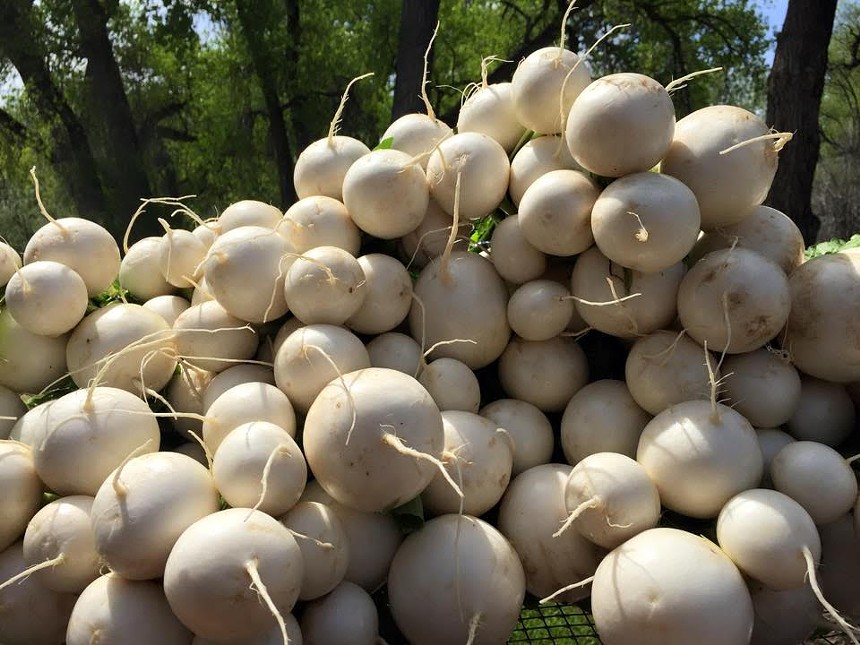 Farmer Michael Moss at Kilt Farm in Boulder begins to plant hakurei turnips in early March. “The turnips are able to handle cooler temps, kind of like spring radishes, and they don't like super-intense heat," he explains, adding that that's why they become unavailable at local markets for about six to eight weeks mid-summer. Moss and his team start the turnip seeds in the greenhouse and, once they sprout, plant them in the field, where they take about 30 to 35 days to reach maturity. Moss notes that hakurei turnips are among Kilt’s “most successful” crops, which he chalks up to plant nutrition in the soil. “Plants get hangry, just like people, which can cause them to become stressed and unable to manifest their greatness," he explains. "Tomatoes like stress, turnips not so much. They can lose their natural sweetness if too much stress begins to weigh the plant down."

At Kilt, the team plants leafy greens and root crops during optimal, cooler temperatures to ensure a successful harvest. Moss shares my affinity for the hakurei turnips, telling me he had a group of school kids out to the farm recently who enjoyed carelessly munching on them raw, having little insight into their negative reputation. At home, he slowly caramelizes the turnips and feeds them to his infant son, Aiden, who devours them. “The best way we can get folks more excited about hakurei turnips is just to get them in their mouths. The sweetness will do the rest," Moss says.

In the 1980s, food engineers specifically changed the genetics of Brussels sprouts to make them more appealing to the masses, he says. This had obvious positive repercussions, as crispy, fried Brussels sprouts are now ubiquitous on many restaurant menus. Could hakurei turnips follow a similar trajectory? “Why?" Moss asks. "There's so much sweet veggie to love."

The notion that there is so much to love about hakurei turnips is what led me to this deep dive in the first place. They are a true root-to-stem vegetable, meaning you can eat the entire plant, with zero waste. Like Moss's at-home recipe, a slow-and-low caramelization is always a winner. I like to get a pan scorching hot with a little olive oil and place the turnips cut side down in the pan, then turn down the flame to medium low. Don’t move the turnips much, and watch the natural sugars arise. Add a dash of fish sauce or a knob of butter or miso paste and you're good to go. I have found that super-long cooking of hakurei turnips tends to diminish the sweetness and brings out a more mustardy flavor, which is still delicious in its own way.

Haruki turnips are on the menu at Apple Blossom.
Apple Blossom
On our current early-summer menu at Apple Blossom, we quickly smoke hakurei turnips over hickory and turn them into a velvety purée for our butter-basted tofu with local carrots, dates, pistachios and watercress. The turnips have a super-thin skin, so there is no need to even peel them before cooking.

Another delicious fact about these turnips is that they come with a beautiful crown of greens on top, which are an excellent indicator of the turnips' quality and my favorite root vegetable top to eat, imparting a peppery, almost arugula-like crunch when tossed in a salad or sautéed with garlic and tossed with pasta. In fact, one of the signature dishes of Puglia in southeastern Italy, where a vegetable-based diet thrives, is turnips and turnip greens tossed with the local orecchiette pasta — a dish we have used as inspiration at Coperta on numerous occasions.

But the real “aha'' moment I found with these turnip beauties is enjoying them raw. This spring, I gave the turnips to a few servers, challenging them to eat the veggie like an apple. The group somewhat reluctantly dove in, but then their eyes lit up like slot machines as they nodded their heads in unison, mostly speechless.

Up the road from Kilt, at Ollin Farms in Longmont, farmer Mark Guttridge and his wife, Kena, describe hakurei turnips as “honorable," “beautiful” and one of the cornerstones of the food-as-medicine movement. Mark depicts them as “an apple-jicama-radish” mashup. He loves to campaign the turnips’ high calcium and vitamin A properties amid describing them as “nature’s Tums,” an all-natural way to cure acid reflux when eaten raw. Hakurei turnips have also been revered as a hangover cure after a night of heavy drinking.

Ollin Farms has youth programs that educate Boulder County children about farming and agriculture. Mark enjoys telling the kids how hakurei turnips “are the vegetable world’s karate student, dressed in white, ready to fight for you and keep you healthy."

Christian Toohey delivering haruki turnips to Coperta.
Coperta
The Guttridges also remember when a churlish-looking, bearded biker gentleman would shop at Ollin's Longmont Farmers Market stand weekly and exclusively purchase generous amounts of turnips, then morosely go on his way. After numerous weeks of this encounter, Mark finally inquired of him, “What's with the turnips?" The gentleman opened up and told Mark and Kena that his father was going through chemotherapy, and eating their hakurei turnips was the only thing that would quell his stomach pain and allow his father to actually have an appetite. They are a “magical veggie," Mark says, "one of the most important foods at Ollin."

Their magic has, over time, caught on with other local chefs, as well. At his award-winning restaurant Rootstalk in Breckenridge, chef Matt Vawter describes hakurei turnips as “a purposeful highlight of our spring and autumn menus." Vawter, who used to cook in Denver, was introduced to the product a few years back through Christian Toohey at Toohey & Sons Organic farm stand. He embraces the challenge the turnips bring to cooking as they progress in flavor and growth throughout the season. “The turnips have different nuances as they move from thumbnail size to golf ball and subsequently as big as a clementine," Vawter notes. "It's up to our chef team to use their flavors wisely as they grow quickly into the summer."

When still early in the season, he shaves the turnips raw in a fennel salad with poppy-seed yogurt, accompanying wild-caught king salmon. At his new Italian-inspired restaurant Radicato, also in Breckenridge, Vawter and team vaunt the “root to stem” mantra, using both the turnip root and greens as an accompaniment to grilled Spanish octopus, spicy ’nduja sausage and a classic herb and garlic gremolata.

Andrew Zimmern once said that all food has a story, and the best foods have the best stories. The story of hakurei turnips is just beginning to be told. Front Range farmers put it on a pedestal for its medicinal values and growing accessibility; locally inspired chefs are obsessed with its unique flavor and versatility; and home cooks in Colorado are lucky to have easy access to it at our many farmers' markets.

These are definitely not your grandparents’ turnips.
KEEP WESTWORD FREE... Since we started Westword, it has been defined as the free, independent voice of Denver, and we'd like to keep it that way. With local media under siege, it's more important than ever for us to rally support behind funding our local journalism. You can help by participating in our "I Support" program, allowing us to keep offering readers access to our incisive coverage of local news, food and culture with no paywalls.
Make a one-time donation today for as little as $1.