Sassafras owner Julia Grother recently purchased its Highland location. Sassafras
"There's always been a lot of inquiries for us to open for dinner, and right now, we have the right people," says Julia Grother, owner of Sassafras, a popular Southern brunch eatery located at 3927 West 32nd Avenue in the Highland neighborhood.

The restaurant got its start in a Victorian bungalow in Jefferson Park in 2012, but it closed that location and moved into its much bigger current home in 2019. Recently, Grother was able to purchase the property, becoming her own landlord after a decade in business. "It's a gorgeous place to cook and create," she says of the two adjoining homes where Highland's Garden Cafe and then Solitaire once operated.

Over the years, Sassafras has expanded into other locations, too, adding an outpost on East Colfax Avenue that later became Exile Kitchen, which shuttered in February. It also operated at 1027 Washington Avenue in Golden for six and a half years; that spot just closed.

"There was some construction that needed to be done on the building that would put us out of operation for a while," Grother explains. Instead, she chose not to renew the lease and "decided to activate Highland's location as much as we could." Every staff member from Golden moved to the one remaining Sassafras location, and with the extra support, that restaurant was able to be open seven days a week for brunch and has added dinner service from 4 to 8:30 p.m. Thursday through Saturday, with happy hour available from 4 to 6 p.m. 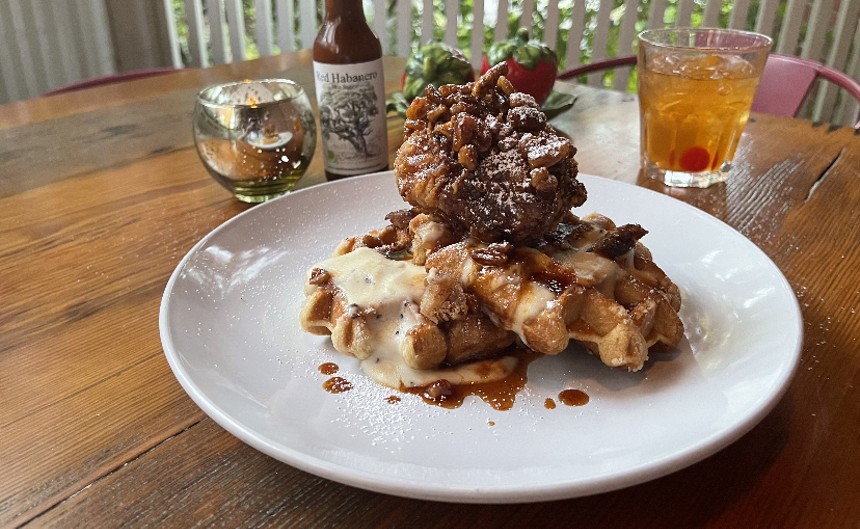 Chicken and waffles is a nod to brunch on the dinner menu.
Sassafras
Chef de cuisine Garret Briskin has been with Sassafras for a year; before that, he worked for five years at Tables, a Park Hill eatery that shuttered in August. "The dinner menu is its own independent thing, with a couple nods to brunch," he says. "We're really trying to keep it approachable and family-friendly. It's elevated Southern food."

The menu will change regularly, but some current highlights include braised, crispy pork belly with cornbread stuffing; collards and apple onion chutney; a rotating fish of the week with citrus yogurt and cayenne pineapple salsa; and crispy confit chicken and waffles with pork belly lardons, duck fat country gravy and chipotle maple syrup.

"It's sophisticated, but still fun," Grother says of the new dinner offerings at Sassafras, adding that "we also have a lot of really fun wines. They're all available at half-price by the glass during happy hour along with other rotating specials, such as the current fall sangria. A lineup of happy-hour appetizers are also on the menu.

"We're excited to re-imagine what our identity is for dinner," Grother adds, especially after surviving the challenges of the pandemic. "It was really incredible to be able to come out of COVID and adjust — it was huge," she says.

Sassafras is located at 3927 West 32nd Avenue and is open from 8 a.m. to 2 p.m. daily for brunch and 4 to 8:30 p.m. Thursday through Saturday for dinner. For more information, visit sassafrasamericaneatery.com.
KEEP WESTWORD FREE... Since we started Westword, it has been defined as the free, independent voice of Denver, and we'd like to keep it that way. With local media under siege, it's more important than ever for us to rally support behind funding our local journalism. You can help by participating in our "I Support" program, allowing us to keep offering readers access to our incisive coverage of local news, food and culture with no paywalls.
Make a one-time donation today for as little as $1.