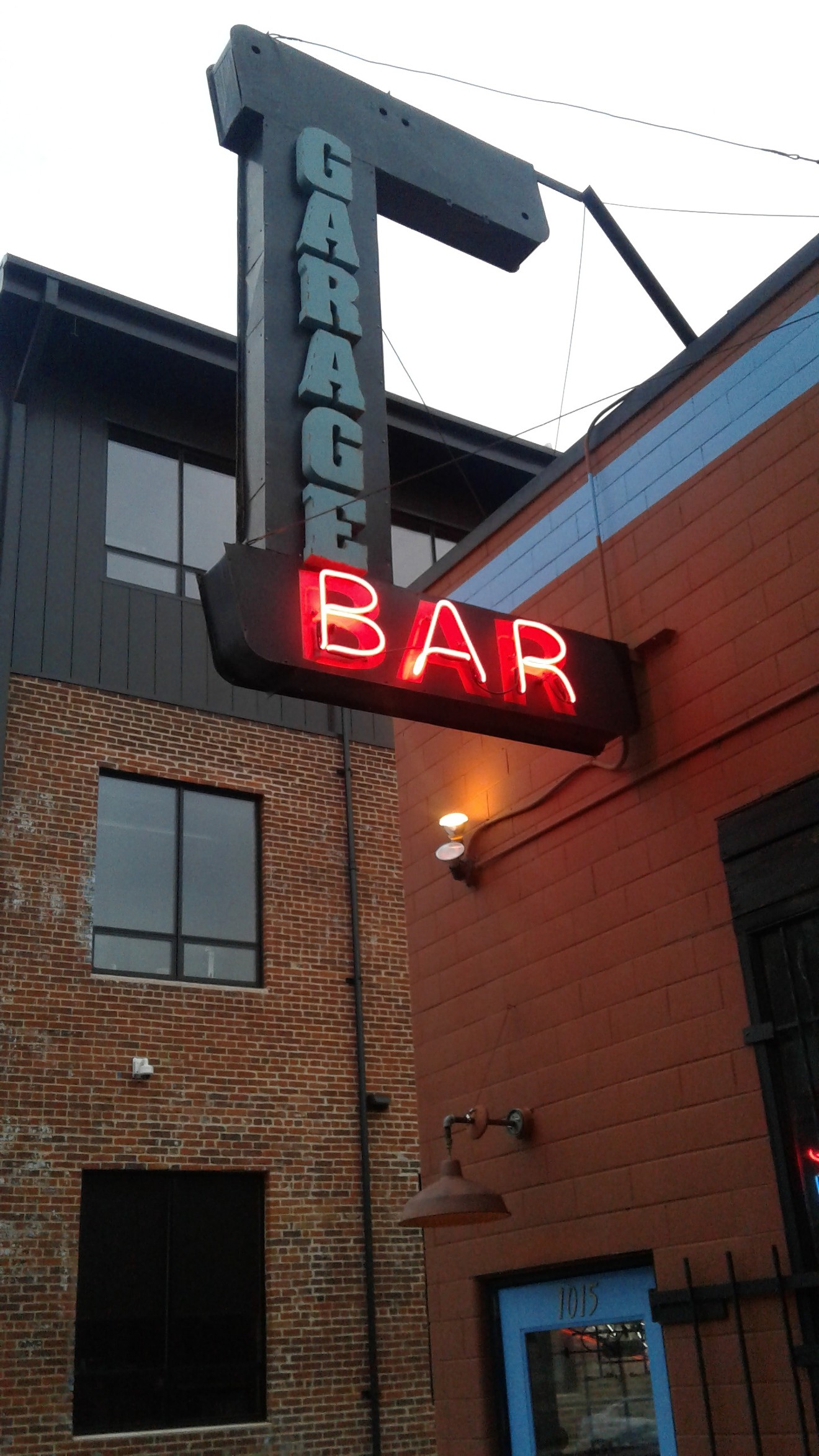 The Bannock Street Garage, at 1015 Bannock Street, used to be an actual auto repair shop. Sarah McGill
If you don't pay attention, you might miss the Bannock Street Garage, or just think it's an actual garage. The building was a car repair shop for years prior to becoming a bar, and the large garage doors and smallish sign could easily fool a person as to what goes on inside — which is drinking, primarily. Until last Friday, I somehow had never been in this place, despite having quite a few friends who live and work in the Golden Triangle or nearby. I even used to work a few blocks away. A friend of mine who used to live in the Parkway apartments, commonly called the "Denver Dorms," just across Speer Boulevard from Bannock Street, had been to the Garage a few times and suggested it as a happy-hour spot.

We slipped into the the dark, deceptively large space, and sidled up to the festive-looking bar with its glowing neon signs, fridges full of beer and large-screen TVs. The decorations above the bar are something to behold: an ornate wrought-iron sign that reads "Bannock Street Garage, Denver, CO" with a wheel and wrenches below it sits high on the wall, with several tires on an old tire rack underneath, as well as some plastic hula-girl statues and shiny motorcycle helmets for good measure. Most of the other patrons were also seated along the bar; a crowd of regulars was having a laugh with some of the staff at the far end, and we had a seat next to a couple of business-casual-looking dudes in their late thirties or early forties. We snagged a couple of vodka sodas made with Deep Eddy grapefruit vodka, which tasted delicious, and talked a bit to the young, innocent-looking female bartender from Nebraska who made them for us. She told us she had only been working there for two months and introduced us to a more seasoned expert, fellow bartender Adrienne Occhione, who filled us in on the history and happenings at the Garage.

As we walked into the bar, some patrons were actually hugging right as I took the picture. Needless to say, the vibe was welcoming.
Sarah McGill
Eleven years ago, owner Eddie Morrissey decided to open the bar and to use the building's roots as an auto garage for the theme. Throughout the place, there are tons of antique signs related to cars, gas stations and mechanics' shops. A huge engine boom swings over the bar and stage area, which according to Occhione, has had more than a few punk band members swinging on it during particularly rowdy rock shows. Two large garage doors remain on either end of the building, the back one opening onto a patio, while some old tool chests and other auto repair-related items have been incorporated into the area behind the bar. Also in the cavernous space are various bar games, from standards like Golden Tee and a pool table to more unusual games like old-school ring toss and an arm-wrestling game called "Over the Top" that involves wrestling a fiberglass arm. There's also a popcorn machine nearby in case you get hungry from all that arm-wrestling.

This "Over the Top" arm-wrestling game isn't something you find at just any bar.
Sarah McGill
Occhione told us about the classic specials at the Garage, such as the Billy Jack, which won a Westword Best of Denver award in 2016 for Best All-Day Drink Deal. What is the Billy Jack, you ask? It's a PBR, a shot of whiskey and a cigarette, all for $5. According to Occhione, it's popular with lawyers who come over after a day in court, and you really can get it all day, every day. If that's not your thing, though, happy hour runs from 3 to 6 p.m. weekdays and involves your choice of $1.50 Coors pours, $2 Budweiser and Bud Light drafts, and $3 well drinks. Another cheap deal is Occhione's own creation, the Hillbilly Bucket, which consists of a bartender's choice of Hamm's, Olympia, Old Style and PBR cans for $10.

Other longstanding happenings at the Garage are rock and blues bands at least a few times a month on Friday and Saturday nights, and an October Pinewood Derby event. In addition, the Garage has often served as a venue for punk bands at the annual Westword Music Showcase. But some new things are on the horizon. Occhione excitedly told us that she is moving into a different role at the bar and is going to be introducing two fresh weekly events. A musician herself, she started a Monday night open-mic event this week to showcase local talent of all kinds, including music, comedy and spoken word. So if you've got some talent you want to display, come sign up at 6:30 p.m. on Mondays to get on the Bannock Street stage.

This Mobil sign is one of the collection of antique signs and other automobile-related decorations at the Garage.
Sarah McGill
In addition, to welcome the ongoing barrage of new neighbors to the Golden Triangle ’hood, next week Morrissey and Occhione will be kicking off a Thursday night "neighborhood meet and greet." This weekly event will be an extended happy hour targeted at the young professionals in the area who want to meet their neighbors (or take their chances on meeting someone without using Tinder). Occhione, who lives nearby, has noticed that many people she meets tell her they want to get to know their neighbors, but there isn't really an easy way to do that in the apartment and condo high-rise jungle that surrounds the bar. So the hope with this new event is to fill a need for the surrounding community, and if that doesn't make this place a neighborhood bar, I don't know what does.

Another neighborly offering is for the hardworking folks of nearby Denver Health: a BOGO first round for hospital employees, on any type of drink, any time, any day. My drinking companion, who actually happens to be newly employed at Denver Health, made a note to start coming here after work with her co-workers.

Occhione has a lot of love for the bar regulars and patrons in general. The crowd, composed of a mix of lawyers, tattooed bike messengers and everyone in between seems to coexist peacefully and always pay their tabs — which, according to Occhione, hasn't always been the norm at other Denver bars where she's worked. It was definitely peaceful and friendly this particular Friday night, and everyone but us seemed to know the bartenders. My friend and I searched for a way to describe the current crowd, and the Wallflowers song "One Headlight" seemed to fit the mood. Like the Wallflowers, the bar crowd seemed like people who were in their prime in 1996 but still retain a certain charm at present.

As my friend and I scooted out of the bar into the cold, rainy evening to head on to our next destination, I was glad to have finally experienced the quirky yet welcoming Bannock Street Garage. It made me wish for a moment that I was rich enough to live in the Golden Triangle so I could meet my neighbors there on Thursday nights.