Karl Christian Krumpholz
A host of national comics creators will descend on DINK, Denver’s premier independent comics convention, at the McNichols Building on April 8 and 9. But DINK also prides itself on nurturing the local scene. Listed in alphabetical order, below are just a handful of the notable Denver-based artists and writers who will be appearing at DINK to do sketches, sell their wares, speak about their process, meet with current fans and make new ones.

Courtesy of the artist
Lonnie Allen
For the past eight years, Lonnie Allen has been best known around Denver as the organizer of Denver Drink and Draw, a weekly gathering of comics artists. But he’s also an accomplished cartoonist in his own right. He’s been published by Image Comics, and his work has been nominated for a prestigious Eisner Award. His long-running webcomic series Delineate was recently collected into a print edition, and he’s a member of DINK’s planning organization as well as the comics editor of Denver’s Suspect Press.

Courtesy of the artist
Kristina Bad Hand
Originally from Taos, New Mexico, Kristina Bad Hand will be releasing her graphic novel Kaui: A Polynesian Tale of Beauty and the Beast at DINK this year. Bad Hand’s Sicangu Lakota and Cherokee ancestry has led to her to become a community liaison for Jeffco Indian Education as well as various indigenous organizations that seek to empower participants and promote social justice through art, including Red Team Go!: An Artists’ Collective. She also works with Denver Comic Con’s Pop Culture Classroom.

Courtesy of the artist
Morgan Beem
Morgan Beem’s comics art, often vibrantly painted, has been popping up in numerous places over the past couple years, including independent anthologies such as Sweaty Palms, Valor and Then It was Dark. She has multiple projects in the works, most notably The Family Trade, which she describes as an “ocean-punk action-fantasy series.” Created in collaboration with Justin Jordan and Nikki Ryan, The Family Trade will be released by the high-profile indie publisher Image Comics this fall, along with another project from Image titled Here//After. 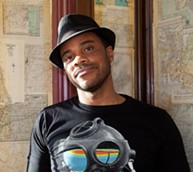 Courtesy of the artist
R. Alan Brooks
The familiar voice of the popular comic-book podcast MotherF**ker in a Cape, R. Alan Brooks is a transplant from Atlanta who cut his teeth creating the comics projects Kaleidoscope and Spotless. He wrote his latest series, The Burning Metronome — illustrated by Dion Harris and described by Brooks as The Usual Suspects meets The Twilight Zone — as a way to explore the issue of police brutality, among others, as a supernatural murder mystery. As if that all that didn’t keep him busy enough, Brooks is also a musician and is currently working on a screenplay.

Courtesy of the artist
Daniel Crosier
Daniel Crosier was the site operations director for DINK in 2016, but he’s returning this year strictly as a supporter and participant. Along with his illustration work for various clients, including rock bands, and his neo-kabuki performance group OdAm fEI mUd, he’s partnered with performance artists The Enigma and Serena Rose on the comics series Show Devils, just one of his many comic-book credits. He’s also a filmmaker, and last year saw the release of his superhero mockumentary short, "Isolation Man."

Courtesy of the artist
Dylan Edwards
How I Told My Grandma I’m Transgender, a comic by Dylan Edwards, won the National Lesbian and Gay Journalists Association’s 2016 Award for Excellence in Transgender Coverage. Edwards also contributed to Ignatz and Lambda Award-winning anthologies like QU33R and Beyond Anthology. Along with an upcoming autobiographical piece for Secret Loves from the renowned indie publisher Dark Horse Comics, he continues to focus on Valley of the Silk Sky, his ongoing sci-fi webcomic.

Courtesy of the artist
Neil Ewing
A love of vintage science fiction and comic books informs the work of Neil Ewing. A staple of the local DIY music scene and graduate of the Rocky Mountain College of Art + Design, Ewing has funneled his satirical reimagining of pop culture into his work, including his latest comic, Solar City Four Redux. His twisted vision can also be glimpsed in books such as Tomb of the Meat Beast and Planet Karl. In addition, he heads a comics-and-art collective called Kool Planet Comix.

Courtesy of the artist
KaiJu
KaiJu, the comics team made up of K. Rhodes and J. Xu, has been flexing its conceptual range over the past couple years, creating comics that tackle everything from World War I drama to manga-inspired comedy to LGBTQ historical fiction. Rhodes and Xu’s focus, however, is on their ambitious, sumptuous, self-published webcomic Novae, an epic romantic adventure about an astronomer and a necromancer.

Courtesy of the artist
Zak Kinsella
Another local comics creator working in the sci-fi field, Zak Kinsella has kept busy lately with his self-published space opera Outré Veil. He’s also an in-demand illustrator and designer of posters for comedy and music events around the country. Coming soon is his next big project: a comedic collaboration with Jeremy Stoll titled The Dick Pic of Dorian Gray, which Kinsella calls “a satire of men who can’t help but send you their unmentionables.” 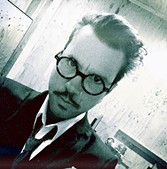 Courtesy of the artist
Karl Christian Krumpholz
Karl Christian Krumpholz is most visible in Denver as a freelance cartoonist for Westword — but his résumé stretches back many years, to his acclaimed Byron series for Slave Labor Graphics. Krumpholz’s recent strips about the history of Denver, including "30 Miles of Crazy!" and "The Denver Bootleg," spun off into animation work for the Colorado Public Television documentary Neal Cassady’s Denver Years. Next up is An Introduction to Alcohol, a book he’ll be debuting at DINK that traces his complicated relationship with both his father and the bottle.

KEEP WESTWORD FREE... Since we started Westword, it has been defined as the free, independent voice of Denver, and we'd like to keep it that way. With local media under siege, it's more important than ever for us to rally support behind funding our local journalism. You can help by participating in our "I Support" program, allowing us to keep offering readers access to our incisive coverage of local news, food and culture with no paywalls.
Make a one-time donation today for as little as $1.
Jason Heller
Contact: Jason Heller