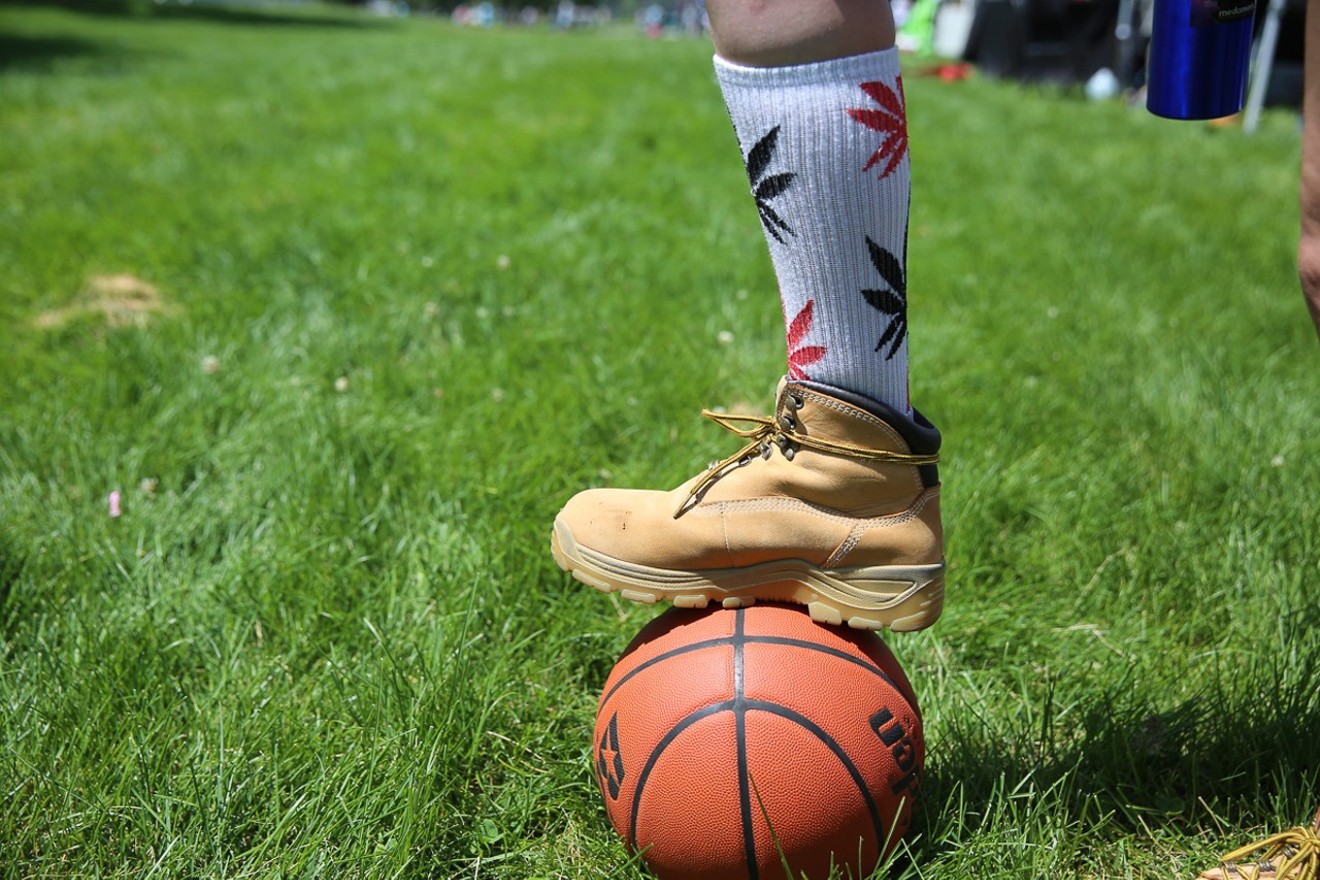 The Denver 420 Games at Berkeley Park in 2017. Brandon Marshall

Heather DeRose realized she had to take a hard look at her lifestyle and eating habits after college. She was forty pounds overweight and routinely felt sick after eating. A doctor told her she was allergic to eggs, dairy and wheat, which she found on the label of nearly everything in her pantry.

During that overhaul, DeRose found hemp. Now, she and her husband, Antonio, run MJFITNUT, a website that promotes using cannabis to supplement a healthy and active lifestyle. The two held an event on Sunday, March 25, at Urban Sanctuary to teach about using hemp for nutrition while raising money for Realm of Caring, a nonprofit in Colorado Springs that funds cannabis research, spreads education about the plant and advocates for greater access to cannabis treatments.

The two were the first people to complete a national tour of The 420 Games, a series of fitness competitions  that aims to end the stereotype of cannabis users as lazy stoner bros. In 2017 the DeRoses competed in nine races across the country, and Heather took to the podium in three races for first-, second- and third-place wins.

Now they hold events and produce content to raise awareness around “cannafitness” and fight against its stigma. Heather is optimistic that attitudes are changing as more celebrity athletes talk about their past and present use. In September 2017, the World Anti-Doping Agency removed cannabidiol (CBD), a compound found in hemp, from its prohibited-substances list, opening the door for more medicinal use.

“It’s definitely moving forward” as more people come out of “the green closet,” Heather said at the Urban Sanctuary event. “What we’re trying to do is get people to talk about it.”

Antonio and Heather DeRose
Courtesy of MJFITNUT
For Heather, hemp made sense because it checks off a lot of nutritional boxes. It’s high in magnesium, vitamins B and E, iron, zinc and omega-3 acids. Many of the vitamins it contains help support proper brain function, which in turn helps her epilepsy, she said.

Hemp is a complete protein, according to Antonio, because it contains all nine amino acids and all of the BCAAs, or branched-chain amino acids. Taking supplements high in BCAAs before and after workouts has been shown to help muscle trauma and recovery, he said, “which means you can train longer, harder and more often.”

“A lot of people think about meat when they think about protein, but I eat a plant-based diet,” said Antonio, who gets all the protein he needs from plants and hemp, which is mostly made up of edestin, a relatively easily digestible protein.

Devin Alvarez, the CEO of Straight Hemp, was also present to teach about CBD's benefits for the body. Straight Hemp is a Colorado-based company that makes CBD oils, salve and Terpsolate, among other things, and Alvarez spoke about other ways CBD and hemp could be beneficial for the body.

Hemp could affect the nervous system with regard to perceiving pain, according to Alvarez, who looked into plant medicine after losing family members to opioid overdoses in Florida. While at the United States Air Force Academy, he became more experienced with cannabis and decided to go back to school for biotechnology and environmental science. He worked as a quality-control engineer before founding Straight Hemp in hopes of having a greater impact on his family’s health.

“I set out to craft some products that my mother could afford and I would feel comfortable with her using,” he said, explaining that his mother is using CBD oil and salves for pain after a lifetime of working on her feet and being prescribed pharmaceutical drugs.

Some studies have shown that CBD can also prevent or reverse Alzheimer’s disease and dementia by reducing neural inflammation and eliminating amyloid plaques in the brain, Alvarez said. In the same way, CBD can reduce inflammation in a number of places throughout the body, making it beneficial for athletes suffering from pain or soreness.