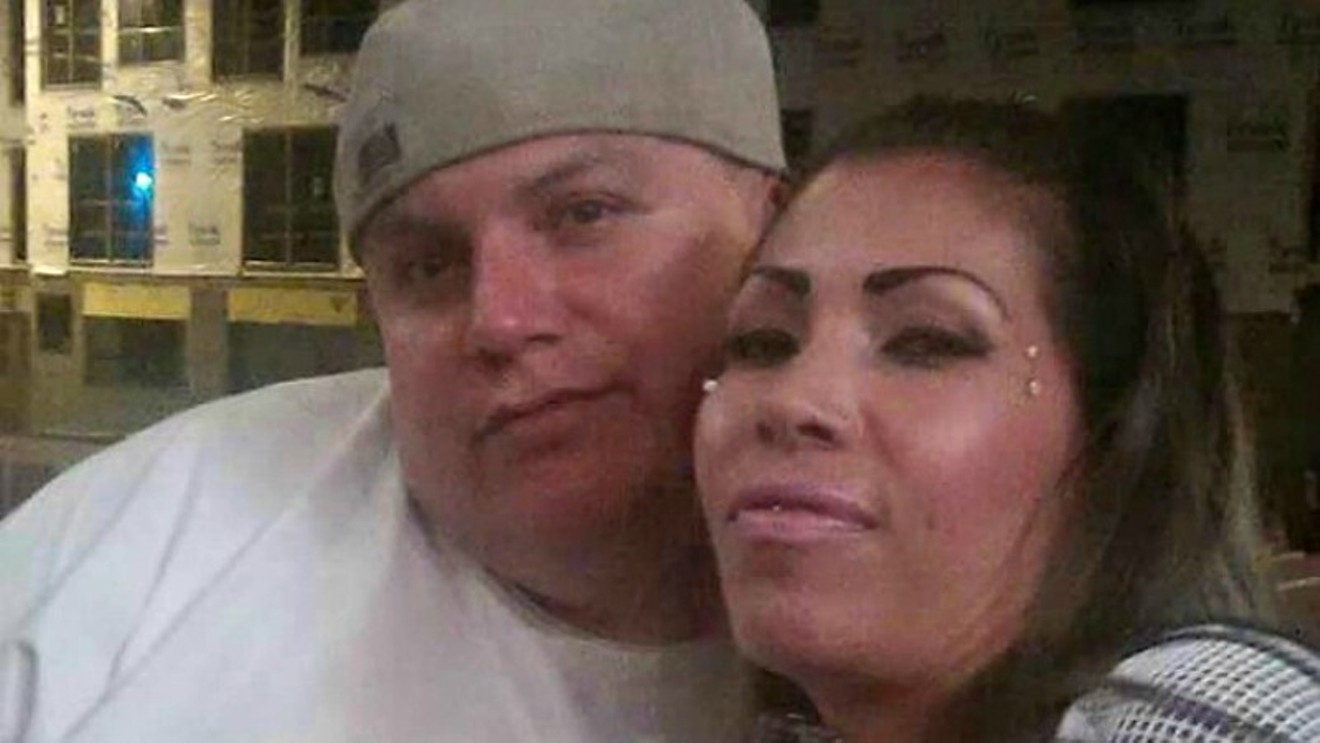 The late Dion Damon with his wife, Dawn Aguirre, who's among the plaintiffs in a lawsuit against the City and County of Denver and the police officer who killed him. Facebook
A new lawsuit prompted by the fatal police shooting of Dion Damon two years ago this month deals with more than the facts of the tragic case. The document, on view below, also maintains that the incident exemplifies a pattern and practice of the Denver Police Department when it comes to excessive force and attempts to bolster its argument via a select history of ten controversial DPD shootings, many of which resulted in huge settlements funded by local taxpayers.

"In each and every one of these instances, the Denver DA found the shooting to be justified, conducted an investigation with the express outcome of exonerating the officer involved, and refused to pursue criminal charges against the officer," the document maintains.

The following excerpts from the suit include links to and photos from previous Westword coverage.

Jessica Hernandez was shot to death in 2015.
File photo
Number 1:

On the morning of January 26, 2015, teenager Jessica Hernandez was shot three times and killed by two Denver police officers. At the time Ms. Hernandez was shot, she was in a vehicle that had been reported stolen with four other teens. None of the teens had weapons. In all, the officers fired eight shots, including four that went through the driver’s side windows. As part of a subsequent coverup of the police officers’ actions, former District Attorney Mitch Morrissey determined the officers’ actions were legally justified and declined to file charges. In January, the police department determined that officers did not violate any policies and they would not be disciplined. In April 2017, Denver paid $1,000,000, along with other non-monetary consideration, to settle Ms. Hernandez’s family’s claims that the Denver police officers used excessive force.

On July 2, 2014, Joseph Valverde was shot and killed by Denver police officer Justin Dodge during a planned drug sting operation [as seen in the video above]. During the operation, multiple officers surrounded Mr. Valverde and told him to disarm himself and put his hands in the air. Mr. Valverde complied with these orders, discarding a gun in his waistband and raising his arms. As he raised his arms into the air, Officer Dodge shot and killed Mr. Valverde. Immediately following the shooting, and pursuant to Denver’s custom, policy, and practice of immediately initiating a coverup of unlawful, willful, wanton, and unconstitutional police shootings, the DPD issued a statement that Officer Dodge’s killing of Mr. Valverde was justified. Officer Dodge then made numerous false statements about Mr. Valverde and the circumstances of his death, including stating that Mr. Valverde pointed a gun at the officers on scene. This statement was clearly contradicted by video of the incident. Instead of disciplining Officer Dodge for his unconstitutional use of force, Denver’s Internal Affairs Bureau (“IAB”) declined to discipline Officer Dodge and, in fact, gave him an award. The Denver DA’s office also instituted a sham investigation aimed at exonerating Officer Dodge and declined to press charges against Officer Dodge despite significant evidence that he had unlawfully shot and killed Mr. Valverde.

Paul Castaway with a knife to his throat as he moves toward officers, as seen in surveillance footage from the tragic scene.
Denver District Attorney's Office via YouTube
Number 3:

In July 2015, Denver Police Officer Michael Traudt shot and killed Paul Castaway while Mr. Castaway was holding a knife to his own throat and standing at a significant distance from the officer. The officer made little attempt to talk Mr. Castaway down or arrest him using less lethal means prior to shooting and killing him. As is customary, the Denver DA refused to prosecute the officer involved and instead issued a decision letter with the purpose of inoculating the officer from liability and slandering the shooting victim. In his decision letter, the DA stated, “In this investigation, we are, once again, presented with a situation in which police officers are called to deal with someone who is violent, apparently suicidal, and who has an astounding combination of alcohol and controlled substances in his system. As is all too often the case, the actions and decisions of the subject place an officer who is attempting to take the subject into custody or ‘talk him down’ in an untenable situation: a situation where the officer will, in many instances, be driven by the subject’s actions to use some degree of physical force or deadly physical force.” The officer involved was not subject to any discipline by Denver after the conclusion of the IAB investigation, and Denver ratified his actions.

Sharod Kindell in the Denver Detention Center infirmary after being shot by a Denver police officer.
Photo by Anthony Camera
Number 4:

On January 9, 2015, Denver Police Officer Jeffrey DiManna shot Sharod Kindell during a routine traffic stop. Mr. Kindell was unarmed. During the traffic stop Mr. Kindell refused to get out of his car and multiple police officers forced him out. As they did so, the car, which was still in gear, moved in reverse. Mr. Kindell ran from the police officers and was shot again, while fleeing and unarmed. The Denver DA found the shooting to be justified and no officer was disciplined for their role in the shooting of Mr. Kindell.

On November 20, 2014, a Denver Police Officer shot Joel and Carlos Jurado through the passenger-side window after a vehicle pursuit. The Denver police officers, Ernest Sandoval and Jeff DiManna (who went on to shoot Kindell), shot at the Jurados as they drove away. The Jurados were unarmed. Upon information and belief, no officer was disciplined for their involvement with the shooting of the Jurados.