Are Some Christians More Equal Than Others in Cakeshop Case?

Thinkstock file photo
On December 5, the U.S. Supreme Court will consider whether Denver-based Masterpiece Cakeshop owner Jack Phillips discriminated against a gay couple, Charlie Craig and David Mullins, by refusing to make them a wedding cake. Phillips justifies his actions because the Craig-Mullins union contradicts his conservative Christian views, and he's backed by the faith-based Alliance Defending Freedom and President Donald Trump's Justice Department. But a representative from the Interfaith Alliance of Colorado, which has joined an amicus brief accessible below that opposes this position, says a ruling for Phillips would essentially suggest that one Christian belief system is more important than others.

"Even within Christianity, there's only a small portion that feel they're under threat," says Amanda Henderson, who's both the IAC's executive director and a Christian pastor. "But they have a loud megaphone and feel these types of cases are a way to win back their power." She contends that a Masterpiece Cakeshop win "would be preferencing one view within Christianity."

Henderson notes that "1,200 different faith leaders and organizations have signed onto the amicus brief in support of this couple, and in support of saying that religious beliefs don't give us justification for discrimination." The coalition includes Americans United for Separation of Church and State, the Anti-Defamation League, the National Council of Jewish Women, Inc., People for the American Way Foundation and many other groups.

As for the IAC, Henderson stresses its diversity. In her words, "We represent more than sixty faith leaders in Colorado and bring together people from multiple religious traditions: Muslim, Jewish, Buddhist, Hindu, Sikh, atheist, agnostic and multiple forms of Christian. But we're all grounded in shared values of human rights and equality. We believe that when one of us is harmed, all of us are harmed — and that's why we're speaking out."

Masterpiece Cakeshop owner Jack Phillips.
CBS4 file photo
The brief is accessible below, but the following excerpt provides a neat summary: "The guarantee of free exercise of religion is not, and never has been, a license to discriminate.... Yet petitioners ask this Court to grant them just such an impermissible license to discriminate."

That's not how the Alliance Defending Freedom sees it, as evidenced by arguments presented to the Colorado Court of Appeals in April 2015:


(Phillips's) work is intimately connected to his faith. He believes God granted him artistic and creative abilities and that he is religiously obligated to use those abilities in a manner that honors God. He thus declines to create cakes that convey messages that are contrary to his religious convictions, like those celebrating atheism, racism, indecency, or Halloween.

Nor will Phillips create wedding cakes honoring same-sex marriages, regardless who orders them, because Phillips believes that God ordained marriage as the sacred union between one man and one woman.

There are some 300 other bakeries in the Denver area that are available to fulfill such requests. The State has no vital interest in compelling Phillips personally to provide such a non-essential service, especially when scores of other bakeries are ready and willing to do so.

Phillips is forced to choose between following his religious beliefs or staying in business. No state should put its citizens to such a Hobson’s Choice. 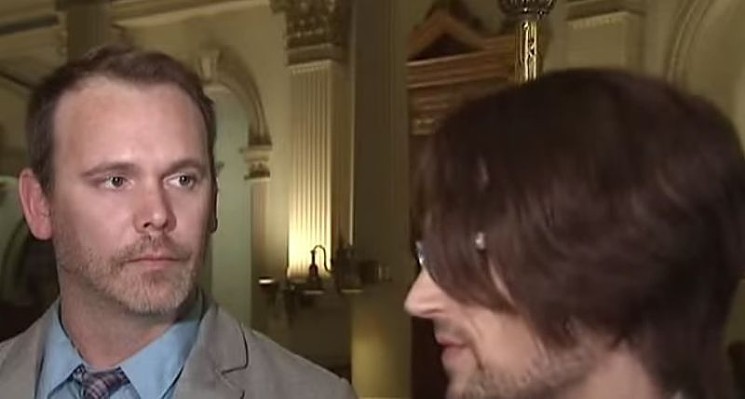 Charlie Craig and David Mullins, whose request for a wedding cake was refused by Masterpiece Cakeshop.
7News file photo
Like the Colorado Civil Rights Commission before it, the Colorado Court of Appeals rejected these assertions, and the Colorado Supreme Court declined to hear the case, allowing the previous ruling to stand. But the U.S. Supreme Court, including Neil Gorsuch, a justice from Colorado nominated by President Trump, is willing to give the controversy a listen.

In its own amicus brief, put forward in September, the Department of Justice promoted Phillips's position on the grounds of free speech (baking cakes is depicted as artistic expression). Moreover, the DOJ maintained that same-sex marriage hasn't been treated by the court system as a compelling state interest on par with, for instance, protecting individuals against racial discrimination.

To Henderson, these claims conflict with the values shared by IAC members from a wide variety of backgrounds. "We believe our faith calls us to first and primarily love our neighbor, but also to stand for and with those who are marginalized and excluded. And to me, it's a misuse of religious freedom to say, 'My freedom allows me to harm another person.'"

Likewise, she feels "we should all be able to walk into a public place of business and expect that we'll be treated the same way as anyone else."

Should Phillips and company emerge victorious, Henderson fears the decision "could have broad consequences. It's chipping away at our civil-rights laws, which have been fought for over decades, if not centuries, in support of minority communities. People from all different backgrounds could be at risk of being discriminated against. My Muslim friends could be denied service because of being Muslim — and a Christian person could be denied service for being Christian. Once we start down this path, we're really putting all minority and marginalized communities at risk."

Click to read the Americans United for Separation of Church and State amicus brief.