How One Speech Turned the Colorado Governor's Race Upside Down

Former Parker mayor Greg Lopez pulled off a stunner at the Colorado Republican Party state assembly. Facebook
No one was surprised when former state treasurer Cary Kennedy and Representative Jared Polis landed spots on the ballot as gubernatorial candidates via April 14's Colorado Democratic Party state assembly, the complete results of which are on view below. But the Colorado Republican Party state assembly, held on the same day, contained a stunner. Former Parker mayor Greg Lopez, whom few political observers took seriously, knocked Colorado Attorney General Cynthia Coffman out of the guv sweepstakes based largely on the power of a single speech.

This kind of thing has happened before at the GOP assembly. In 2016, a dynamic address was the propellant Darryl Glenn used en route to becoming Republican nominee for the U.S. Senate, a contest he ultimately lost to Dem incumbent Michael Bennet.

For Lopez to repeat that feat, more or less, he'll have to knock off current state treasurer Walker Stapleton, who won the backing of the most delegates at Saturday's assembly despite a petition-signature snafu that threatened to derail his campaign at the eleventh hour.

Businessman (and nephew of Mitt Romney) Doug Robinson and entrepreneur Victor Mitchell, whose petitions are currently under examination by the Colorado Secretary of State's Office, are also likely to join Lopez and Stapleton in the running for the Republican primary on June 26. 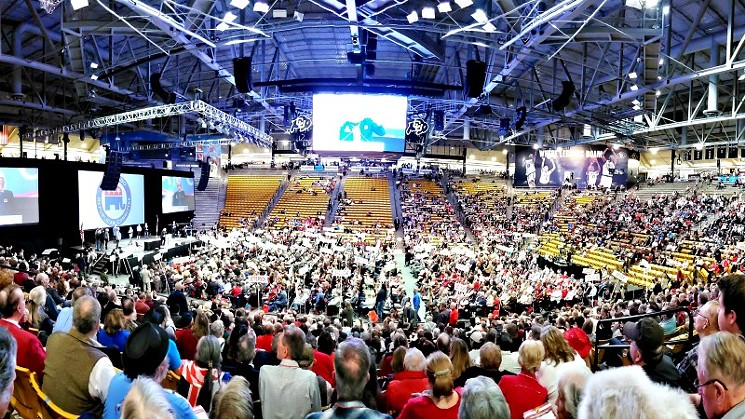 The Colorado Republican Party state assembly, as seen in a photo from Greg Lopez's Facebook page.
Facebook
Lopez was an underdog in pretty much every respect, including from a resource perspective; prior to the 14th, he had reportedly raised a grand total of $23,000 for his gubernatorial bid, $13,000 of which came from his own bank account. But from early on, he positioned himself as a strong general-election candidate. In a video message to delegates recorded last month, he said, "Our path to victory is simple. We just need to garner 15 percent of the unaffiliated and the Hispanic vote." He added, "I'm the former president of the Denver Hispanic Chamber of Commerce. I understand the Hispanic community, and they respect my positions and how I've helped them in the past."

This angle immediately differentiated him from other Republican hopefuls. While Stapleton and others have repeatedly hammered away on the subject of immigration, putting it front and center, Lopez took a lower-key approach. Yes, he also released a video citing his opposition to sanctuary cities (as of this morning, it had 66 views since its publication in December), and he mentioned the matter in his assembly speech. But it doesn't turn up at all on his website's issues page, suggesting that he's positioning himself as less doctrinaire than Stapleton — and that could pay off in a primary that for the first time will allow independent voters to weigh in, thanks to the passage of propositions 107 and 108 in 2016.

On April 13, Lopez took to Facebook to share the following quote from former president Teddy Roosevelt: "It is not the critic who counts; not the man who points out how the strong man stumbles, or where the doer of deeds could have done them better. The credit belongs to the man who is actually in the arena, whose face is marred by dust and sweat and blood; who strives valiantly; who errs, who comes short again and again, because there is no effort without error and shortcoming; but who does actually strive to do the deeds; who knows great enthusiasms, the great devotions; who spends himself in a worthy cause; who at the best knows in the end the triumph of high achievement, and who at the worst, if he fails, at least fails while daring greatly, so that his place shall never be with those cold and timid souls who neither know victory nor defeat."

The next day, Lopez climbed onto the podium, and he made his time there count, as seen below:


These words helped Lopez reach the 30 percent delegate threshold required to make the ballot — behind Stapleton's 43 percent but well ahead of Coffman, who only earned about 6 percent, and candidates Steve Barlock, Barry Farah, Lew Gaiter and Teri Kear.

As for the Democrats, their process meant the results were essentially baked in prior to the assembly's start. Still, Kennedy built on the 50 percent support she earned in the caucus, finishing north of 60 percent, and Polis also exceeded the 30 percent barrier. But while businessman Erik Underwood is officially out, former state senator Mike Johnston has already petitioned his way onto the ballot, and Lieutenant Governor Donna Lynne is in the signature-counting phase.

There's still a lot to be decided in the June primary, and the battles will only grow more intense between now and then. Nonetheless, Lopez remains in the ring. He can't be dismissed anymore.

Here are the results of the Colorado Democratic Party state assembly, from the CDP's Facebook page:

Based on these results, Lesley Smith has qualified for the Democratic primary ballot for CU Regent-at-Large.

Based on these results, Bernard Douthit and Dave Young have qualified for the Democratic primary ballot for Treasurer.

Based on these results, Jena Griswold has qualified for the Democratic primary ballot for Secretary of State.

Based on these results, Joe Salazar and Phil Weiser have qualified for the Democratic primary ballot for Attorney General. Amy Padden can qualify for the ballot if the Secretary of State determines that she has collected the requisite number of valid signatures.

Based on these results, Cary Kennedy and Jared Polis have qualified for the Democratic primary ballot for Governor.

NOTE: These are not all of the candidates that are running for these particular offices. Some candidates have chosen to qualify for the ballot by submitting petition signatures instead of going through the caucus-assembly process.