Indivisible Front Range Resistance is among several local groups hoping to wipe the smile off Senator Cory Gardner's face. Facebook
At 10:30 a.m. today, February 23, members of several Indivisible groups along the urban corridor will be both outside and inside Senator Cory Gardner's Denver office, at 721 19th Street, to protest what they see as his tone-deafness when it comes to the need for gun legislation of the sort students at Marjory Stoneman Douglas High School in Parkland, Florida, began calling for in the wake of the February 14 shooting there.

"We're following them," acknowledges Katie Farnan, spokesperson for Indivisible Front Range Resistance. "But what we're doing today was started by mothers. My children are young — they aren't even in school yet — but I'm terrified, and I don't think we should be having to do this as a country. There's a fundamental lack of action that's led to this crisis and these tragedies. It's something where you wake up with it. It's on your shoulders every day."

Farnan is not new to such protests. Back in February 2017, she was among the driving forces behind a town hall staged with a Gardner cardboard cut-out substituting for the senator, who was refusing to take part in face-to-face events of this sort with constituents. He finally caved on the issue, holding his first town halls in more than a year this past August.

Thus far, however, Gardner has held steady when it comes to weapons.

"Saying that Gardner is bought and paid for by the NRA is a tired line at this point," Farnan allows. "I don't think it resonates with people that much, even though he's taken $3.8 million from them over the course of his campaigns in the Senate and the House. But he seems unable to move on gun violence. He says the problem is a mental-health issue, but if that's the case, why did he gut the ACA [Affordable Care Act]? And what is he going to do about these shootings? Because we know they're going to happen again." 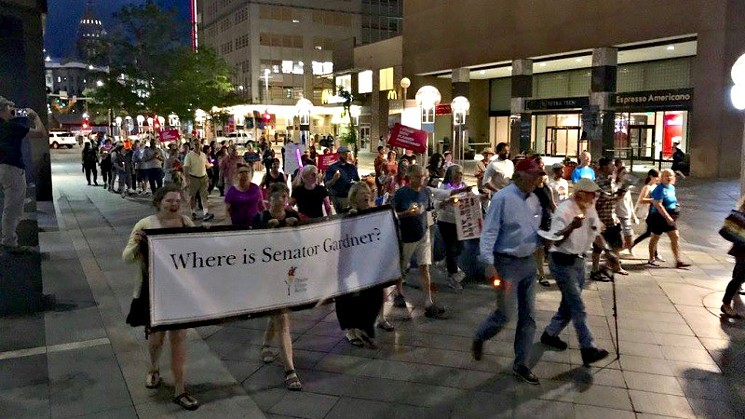 An Indivisible Front Range Resistance event in January.
Facebook
"They reached out to us and asked if we'd like to co-host a protest," Farnan notes. "We said, 'Yeah.' Indivisible Denver CD1 is going to be there, too, and so will Eileen McCarron with Colorado Ceasefire, which did the lie-in at the State Capitol earlier this week. She's going to share some remarks, and we may do a lie-in this morning, depending on how snowy it is there."

After the rally, Farnan continues, "we're going to go into his office in shifts, in groups of three, which is what the building allows, to get in front of staff and ask what Senator Gardner is going to do about this problem."

On average, Indivisible Front Range Resistance protests at Gardner's office draw around thirty people, Farnan estimates — and with that kind of attendance, "it usually takes us a couple of hours to cycle through." But this time around, she goes on, the Facebook events page for the demonstration lists more than 100 people committed to attending and nearly 1,000 expressing interest, "so we don't know quite what to expect."

Farnan works full-time, but she's taking the day off and will be on 19th Street with one of her toddlers, whose presence will accentuate the concerns of moms about Gardner's position on firearms.

Oh, yeah: She lives in Gunbarrel, a community whose name speaks to just how deeply the culture of such weaponry is embedded in Colorado history.

"I know the gun culture's real here," Farnan says. "Some of my family members disagree as far as common-sense gun protections for people. They feel like 'I want access to all types of guns, etc.' So there are some things I don't talk about anymore with them. But I look at what the students are doing as a turning point. These are the actual victims who grew up in this and are now entering the debate. The kids are scared, and maybe they didn't realize they could enter this stage and take it over — and we're right behind them."

In her opinion, "That kind of coalition hasn't happened before. And regardless of what the gun culture is like in Colorado, that's not going to stop us from raising our voices long after the news cycle subsides — which it hasn't done yet about this. We have no choice."