A sign like this one hasn't been on view very often in the Denver area during recent years. Photo by Michael Roberts
Denver's housing market has been red hot for the past few years, with buyers of more modest means often finding themselves priced out of properties thanks to bidding wars that routinely generate over-list offers. But as indicated by the presence of a "Price Reduced" sign on a home in a sought-after part of Centennial, as seen in the photo above, this situation may finally be about to change.

Janene Russeau of Madison & Company, who's handling the South Madison Way and East Phillips Avenue house — it was originally priced at $639,000, but is currently going for $599,000 — feels that "it's turning a little bit more into a buyer's market, as opposed to a seller's market."

If so, that's a big change. As recently as April, real estate agents such as Karen Mistrot, the woman behind Karen & Company Realty, were reacting to the incredible demand for new houses by way of "Coming Soon" signage for homes about to be put on the market. Mistrot, corresponding via email, told us that the signs were a way of dealing with "feeding frenzies on some houses.... I don’t want a buyer to feel like they have to settle on a house two streets over because they have no idea that my listing is about to come on the market."

Russeau, too, has been busy as can be. She first got her real estate license in Michigan, where she practiced for a decade plus before relocating to Colorado about five years ago, and lately she's been blown away by how quickly homes have been selling not only in Denver's hottest neighborhoods, but all over the metro area; she handles properties from Westminster to Highlands Ranch.

"I work with a lot of first-time buyers, and they've been having to compete against investors," Russeau points out. "In the summer, there's been anywhere between ten to twenty offers on a lot of houses," many of which have sold almost immediately. 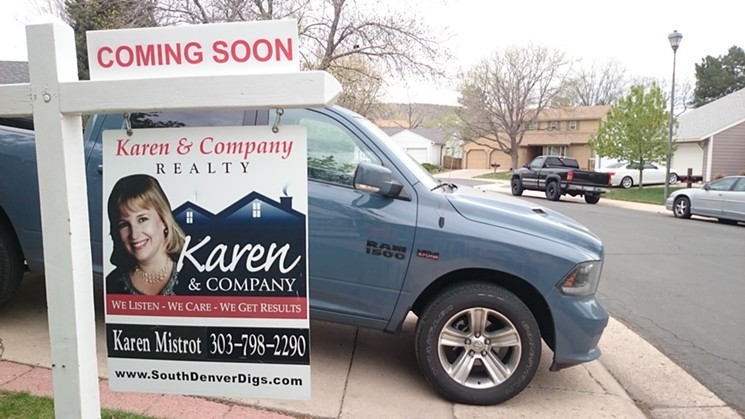 "Coming Soon" signs were popping up in April.
Photo by Michael Roberts
But there's good news for such house hunters. Russeau says home sales traditionally slow down from September through December before picking up again in January — and while the market was so crazy in 2015 and 2016 that this slackening wasn't always apparent, it seems to be this year. Already, she says, "houses are definitely staying on the market a little bit longer."

This let-up has a lot to do with "kids going back to school, people getting involved in the football season, and a lot of different activities," Russeau believes. And in recent days, she adds, the pace flagged for an unusual reason: yesterday's solar eclipse: "I talked to some other realtors, and hardly anyone came to open houses this past weekend. They were all out of town. People were going to Wyoming or other places to see the eclipse."

Even without this celestial event, Russeau says she's been seeing other indications of market moderation. Whereas pretty much any metro-area house has been generating offers in the double digits over recent months, she says that "now you might have two or three or four, tops" in some areas.

Even apartments and condos in tony areas are becoming more accessible, Russeau maintains. "I do a lot with the Polo Club in Cherry Creek," she says of a building at 3131 East Alameda. "It was Cherry Creek's first high-rise. I actually live in it — and I've sold five or six of the apartments this year. The building is putting in over $1 million in renovations, but you don't have to pay $1 million to $3 million to get into it. You can get a nice place with some work from $350,000 to $700,000. So it's still a good buy."

Russeau believes other properties that fit this description will be more readily available over the coming months. "The market is getting a little softer," she says. "And for buyers, that's good news."

That doesn't mean that house hunters can completely relax, though. Note that Russeau has a showing for the price-reduced Centennial property scheduled for this afternoon....