Getty Images
In recent years, we've reported about concerns over heroin use in Denver, and statistics from over the past decade-plus, including provisional data for 2016, demonstrate that there's definitely reason for worry. According to numbers assembled by the Colorado Department of Public Health and Environment, heroin-related fatalities in Denver have increased a staggering 933 percent since 2002.

The rise is nearly as steep on a statewide basis. During the past fifteen years, fatalities related to heroin in Colorado as a whole are up 756 percent, and they've kept escalating during the past three years even as heroin deaths in Denver have leveled off.

CDPHE provided the information to Westword under the auspices of Kirk Bol, manager of the agency's registries and vital-statistics branch, as well as chair of its internal review board. When it comes to heroin, he describes the situation with straightforward simplicity. "Heroin use has gone up," he says.

That's definitely the case in recent Denver history. In 2001, the first year listed in the CDPHE's report, there were no Mile High City deaths directly attributable to heroin: zero. (Statewide in 2001, 23 people died from heroin use.) This performance was actually repeated in 2004, and in general, as shown in the full statistics shared below, the fatality figures stayed in the single digits for the next five years.

Denver's numbers have gone up considerably since then. In 2007, the CDPHE lists 12 heroin deaths in the city, with the number rising to 16 in 2008 — and the next year, 2009, the Denver fatality total doubled, to 32. Although the data moderated to some degree over the next four years, they soared to 35 in 2014, and they've remained over thirty ever since. The 2016 numbers aren't officially in the books yet; final 2016 data should be available later in the spring. But the preliminary heroin-death figure for last year is 31.

If there's any good news in this information, it's that the heroin death total in Denver has plateaued and even receded a bit during the past three years. But the overall trend is up precipitously since the turn of the century, with periods of stabilization and decline followed by more increases. 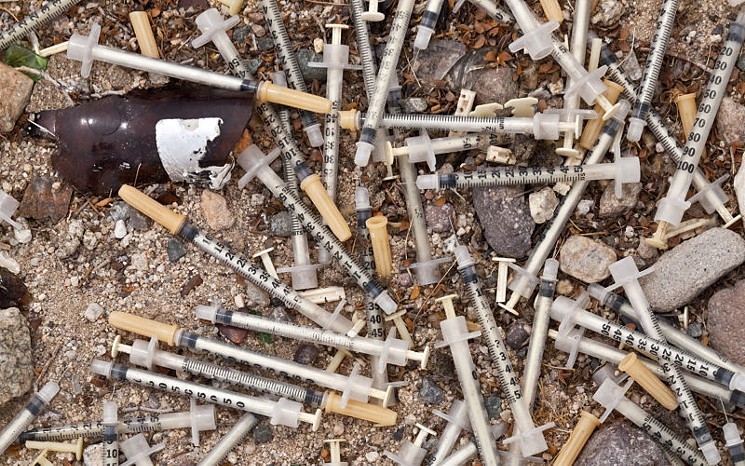 Thinkstock file photo
The same phenomenon plays out with heroin deaths across the state. In 2001, as noted above, the CDPHE counted 23 heroin-related fatalities, and the deaths stayed in the twenties for the next three years. Between 2005 and 2012, the numbers fluctuated from below fifty to near the century mark before hitting triple digits in 2013, with 118 fatalities. Since then, the Colorado numbers have shot up more alarmingly than the ones in Denver: 151 deaths in 2014, 160 in 2015 and a 2016 provisional total just under the 200 fatality mark, at 197.

The CDPHE's figures are general, not specific. For instance, the CDPHE's Bol acknowledges that "we don't have the ability to tease out inhaled versus injected or ingested."

As for why heroin deaths have gone up so much statewide, Bol notes that "there are a lot of theories. One of the prevailing ideas is that there has been some clamping down on opioid prescription painkillers — a greater awareness in prescribing and proper use — and some folks feel that people may be turning to heroin as a more available and accessible option. That theory considers it an unintended consequence of cracking down on opioid painkillers."

Bol stresses that he's not endorsing this hypothesis or any of the rest. In his position, he's tasked with putting together the data, and he leaves the interpretation of it to others.

And there's plenty to interpret. Here are the heroin-fatality numbers for Colorado and Denver from 2001 to (provisionally) 2016.