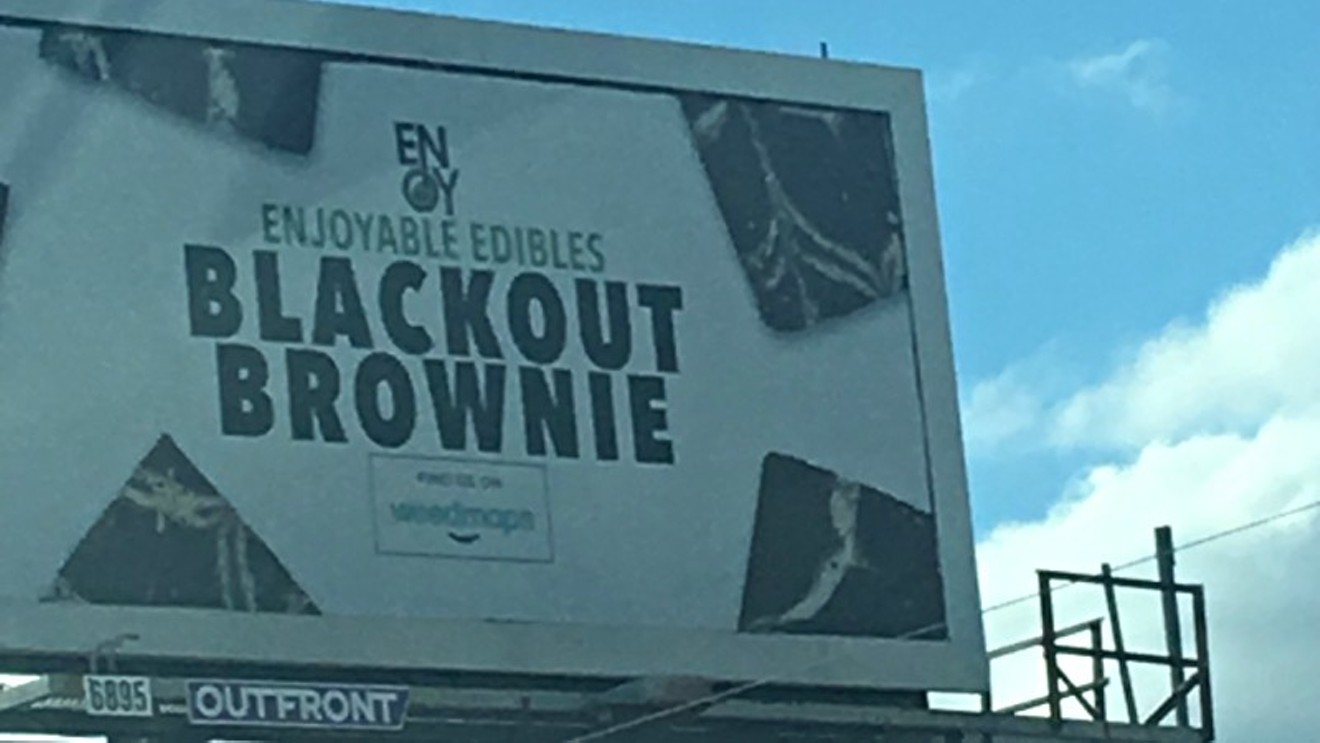 This photo and those that follow all capture billboards currently on display in the greater Los Angeles area. Photo by Elizabeth D'Amico
Marijuana advertising works on kids whether they're the intended audience or not, a new study maintains.

According to "Planting the Seeds of Marijuana Use," assembled under the auspices of Elizabeth D'Amico, a licensed clinical psychologist and senior behavioral scientist with the RAND Corporation, the more medical cannabis ads an adolescent sees, the more likely he or she is to use or express an interest in consuming the substance and to view it in a positive light.

The report, accessible below in its entirety, is timely given current national trends, D'Amico believes. In her words, "We know legalization of marijuana is getting added to a lot of ballots across the states, which is why I think we need to sit down and think carefully about how to address marijuana advertising. It feels like each state is doing it in different ways, so we need to look at how we regulate it so we can decrease the chances of harm occurring, particularly for teens." 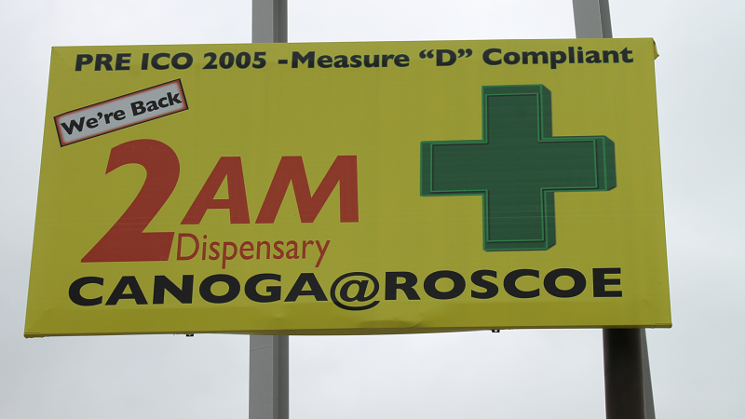 Courtesy of RAND Corporation
D'Amico is right about the wide variations in how marijuana is hyped from place to place, particularly when it comes to billboards. Outdoor cannabis advertising is heavily limited in Denver and throughout Colorado, and that frustrates many business owners, especially given restrictions on pot ads imposed by Facebook and other social media networks. In contrast, Los Angeles, where the study was based, allows marijuana-related billboards aplenty and has for years — and that's given D'Amico and her fellow researchers the opportunity to analyze their long-term impact on young people. 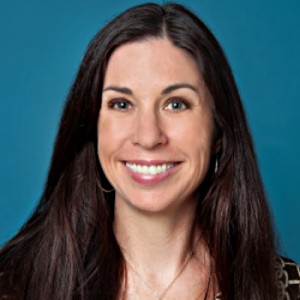 "We were interested in trying to understand how medical marijuana advertising exposure might affect adolescents' marijuana use — their cognition and the consequences," D'Amico notes. "And we have data over seven years. We started collecting data in 2010, when Proposition 19 [a failed attempt to legalize recreational marijuana use in California] first came on the ballot. We wanted to understand what teens were seeing, since marijuana was becoming more mainstream."

The original group of test subjects consisted of 6,509 adolescents in SoCal middle schools; D'Amico points out that "the mean age of the sample was thirteen years old." She's been checking in with them ever since, and she stresses that the latest survey, drawn from 4,946 participants, "is very diverse — over 50 percent Hispanic and about 18 percent Asian." 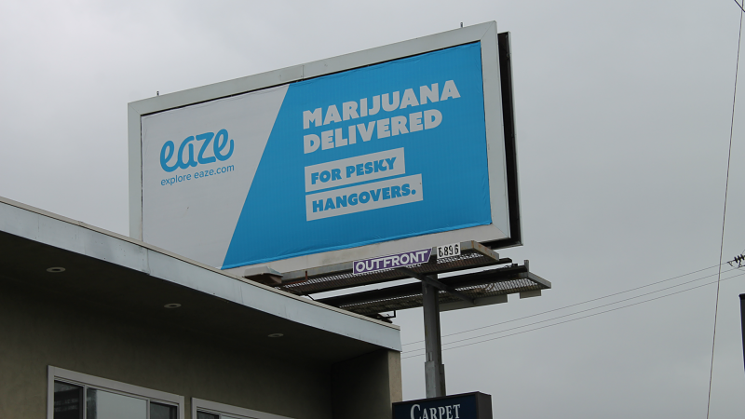 Courtesy of RAND Corporation
The content of many ads has changed, too, D'Amico argues. "I recently saw one for Blackout Brownie" — her photo of it is at the top of this post. "It apparently has 1,000 milligrams of THC, which is like ten joints. There are also a lot of billboards for Eaze, which is a delivery service, including one that says marijuana is good for 'pesky hangovers.' And Weedmaps recently put up one that says Medicaid could have saved $1 billion in 2014 if marijuana was legal in all fifty states. That one cites a research report, but it's still interesting how many different things are going up."

At the same time, D'Amico says, "there's been an increase among adolescents in positive beliefs about marijuana. There's a stronger belief that 'marijuana is going to help me relax and help me pay greater attention.' They also tend to view it positively in comparison with alcohol — and that makes them more likely to use marijuana in the next six months. But this advertising is not only affecting attitudes around marijuana. It's also affecting the negative experiences connected with use," including missing school, getting into trouble in class or at home and having difficulty concentrating on tasks despite cannabis' reported benefits when it comes to focus.

Rather than simply delivering these results, D'Amico is taking action. "I've been working with the City of Los Angeles and also the state senate about regulations around advertising, and I think our data shows that we need to get moving on that. It's a big deal." 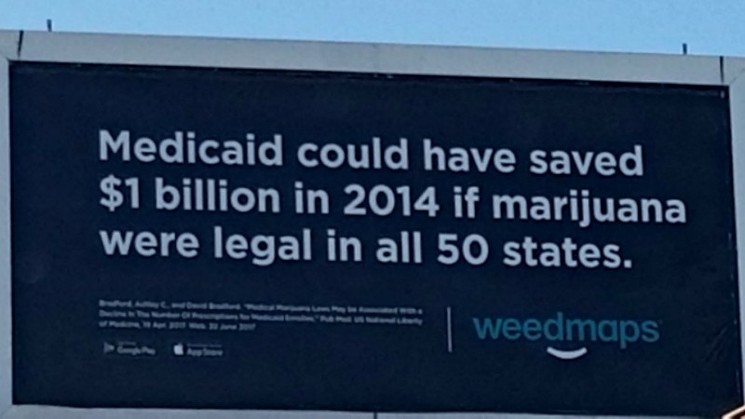 Photo by Elizabeth D'Amico
She adds: "One of the things the county is trying to work on is where this advertising can be — trying to limit the size of the signs, prohibiting portable signs and sandwich boards, and not allowing them in sensitive locations near public libraries, schools and parks. And they're using our work."

Nonetheless, D'Amico isn't calling for cannabis to be re-criminalized.

"That's not my thing," she says. "I'm more like, given that this was voted in, let's make sure we help teens make a healthy choice. We need to help teens navigate this landscape — and it really is a new frontier. They're pretty good when it comes to understanding about alcohol. They'll tell you, 'I would never drink and drive.' But many of them think smoking pot and driving is okay. So there's a lot of education that needs to be done around this drug, so they can understand that just because it's legal doesn't mean it's safe, especially for teens."

Click to read "Planting the Seeds of Marijuana Use."
KEEP WESTWORD FREE... Since we started Westword, it has been defined as the free, independent voice of Denver, and we'd like to keep it that way. With local media under siege, it's more important than ever for us to rally support behind funding our local journalism. You can help by participating in our "I Support" program, allowing us to keep offering readers access to our incisive coverage of local news, food and culture with no paywalls.
Make a one-time donation today for as little as $1.