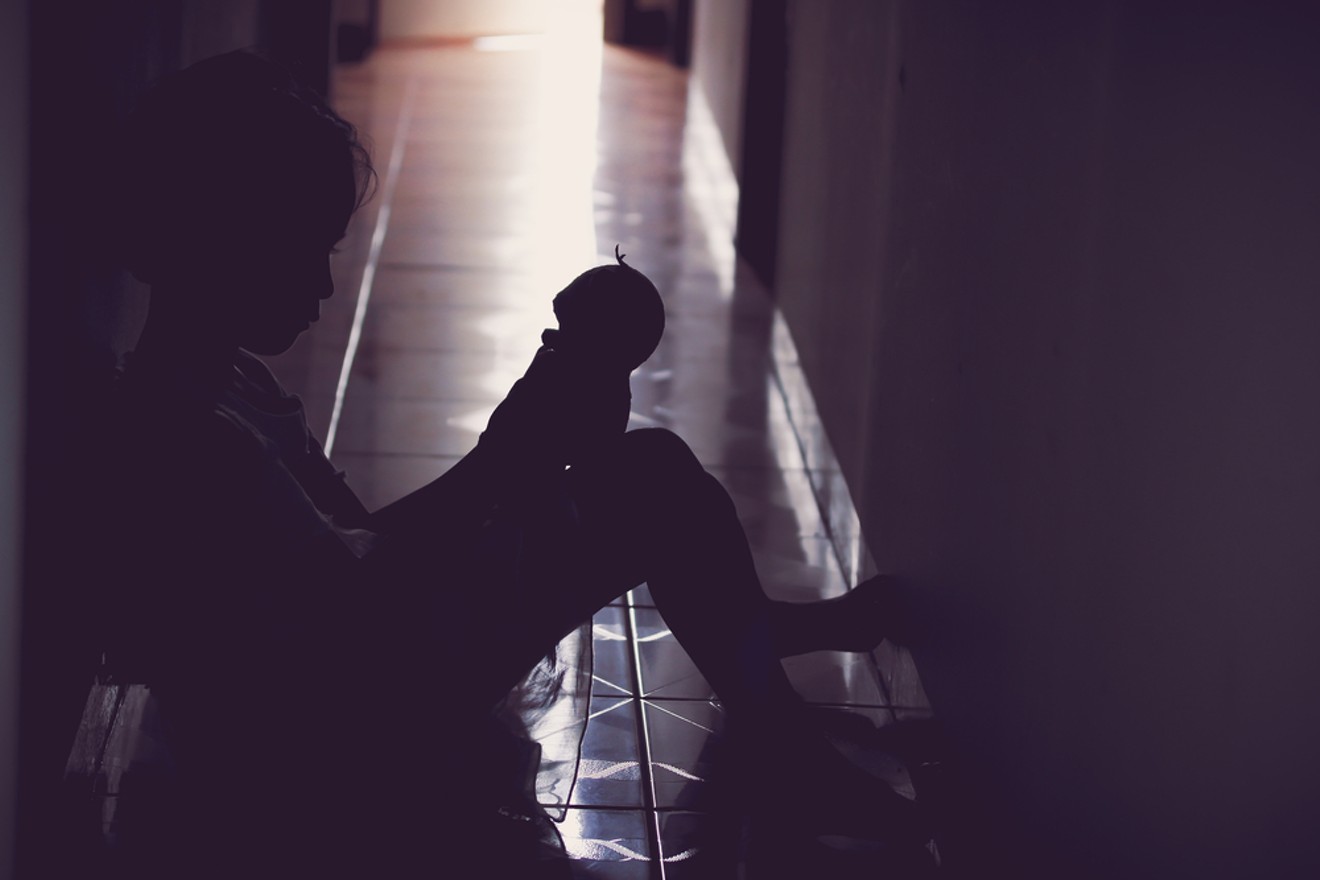 Shutterstock.com/jan_ta_r
A teacher has slipped through the cracks of a Denver school background check, raising concerns from former colleagues and alleged victims about "passing the trash" — letting suspected or convicted teachers go without notifying parents and leaving them free to teach around the country until allegations catch up with them.

In 2002 and 2012, Westword wrote about former P.S. 1 Charter School principal Stephen Howard Myers, who faces a string of child-molestation allegations from eleven men (then boys) stretching back to the 1970s. In 2002, Westword reported that Myers had traveled to Massachusetts after leaving P.S. 1, where he resigned as principal of an Amherst elementary school for making inappropriate comments to a student — which didn't surprise former colleagues in Denver or in Santa Cruz, where Myers was investigated after a student was repeatedly seen wearing a g-string and sitting in his lap. Then, a 2012 Boston Magazine article investigated Myers's alleged abuse of adopted child Sage Christensen, who stabbed a man to death in a 2011 St. Patrick's Day brawl.

Now, a support group for alleged victims is charging that Steve Myers changed his name to Stephen Swarup Jackson while living in Arizona in 2012, before teaching English for four and a half years at Yeshiva Toras Chaim, a private Jewish school in west Denver. An administrator at YTC confirmed that Myers worked there in the past as Mr. Jackson, and did not comment on whether the school community had been informed. A source who wishes to remain anonymous told Westword that the administration initially planned not to alert teachers and parents of Myers's past. Myers could not be reached for comment.

A source familiar with the school says that Myers is no longer teaching at YTC and that he left the country after administrators became aware of the allegations.

A Denver Police Department report from February 10, 2017, shows that officers looked into the case but decided not to investigate further because Myers is not a registered sex offender under either name and has no active warrants to his name. Denver Human Services also declined to investigate in January.

Myers does not have a criminal record in part because of jurisdiction issues and the statute of limitations. In a 1996 Santa Cruz police investigation, officials said it was "apparent" that Myers had sexual contact with two teenage boys, but the cases were outside of their jurisdiction. In the police report, Myers admitted to engaging in sexual acts with the boys: a student on a trip to South Africa and a boy on a camping trip that Myers organized.


Several alleged victims have said that they did not want to go through the trauma of a trial as boys and did not tell anyone until years later.

Several alleged victims have said that they did not want to go through the trauma of a trial as boys and did not tell anyone until years later.

Judge Gary Jackson, who was appointed by Mayor Michael Hancock as a Denver County Court judge in 2012, is a lifelong friend of Myers. "I've known Steve for fifty years. We both went to kindergarten together," he says. Jackson is aware of the string of allegations against Myers but feels that YTC benefited from his teaching there.

"[Myers's] students are well-mannered, bright, believe in the Constitution, and it was a pleasure working with the school," Jackson continues. "It was an incredible experience for the kids, as well as the personnel of my courtroom. It was always a great experience."

A former colleague of Myers's, Connie Durant, says that she notified the school when she tracked him down at the west Denver Talmudic academy. Durant runs infostevemyersjackson.org, a website filled with the allegations against Myers, with alleged victims, concerned teachers and co-workers who have brushed with him in the past.

When Durant tracked Myers down to Yeshiva Toras Chaim last January, she says she quickly told the administration about his past and sent them resources — like the 1996 Santa Cruz police report written by a detective in which Myers admits being attracted to teenage boys:

"I asked Myers if he had a preference for a particular age or sex, and he admitted he used to have an attraction for boys between fourteen and sixteen. This desire coupled with the incident between he and [omitted] lead him to seek counseling. He has been seeing [omitted] [omitted] for approximately four years. This therapy has assisted him to become sure he is cured," reads the report.

At the time, Myers was in the process of adopting a four-year-old boy from Romania, who was later removed from his custody and placed with a different foster parent. Six months later, the new parent reported the four-year-old's account that Myers had performed oral sex on and sodomized him.

Durant says that the school threatened her with a lawsuit if she informed the media that Myers worked there. After Myers left YTC, Durant says, he sent her an email condemning her for notifying the administration.

In the email, he wrote that "hanging out with kids was a dead end" and "the idea of taking a kid to a movie now makes me feel bored." 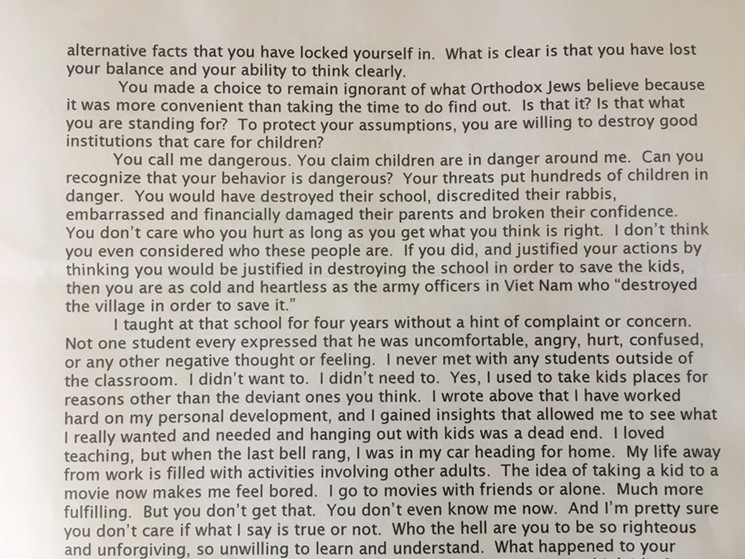 An excerpt from a letter that Durant says she received from Myers after he left YTC.
Courtesy of Connie Durant
But Jon Warner, who claims that Myers molested him in a Santa Fe hotel room in the 1970s, when he was thirteen, says that people like Myers don't change. "He runs, he runs, he runs — and he molests," says Warner. "There's no way that he went to the East Coast just to teach."

Warner says that he didn't come forward with the allegations until Durant reached out to him a few years ago. "I was ashamed, embarrassed, hurt. There was no way I, a teenage kid, was going to tell anyone about what happened."

Durant says that she knows of eleven boys — now men — who claim that Myers pressured them into sexual acts while they were underage, usually between the ages of thirteen and sixteen. The incidents began, they say, in the 1970s, when Myers was a popular educator and administrator at several schools in California. He also established and led days-long bike trips with students called the “Traveling School"; in the Boston Magazine article, a man named Dan Thiel said he was groped by Myers in his sleeping bag on one such trip.

The allegations continued through the 1990s, forcing Myers to leave his job as a school principal in Amherst. Sage Christensen, a child from Ukraine (his original name is Igor Odnohorchenko), was also adopted by Myers for about three years before he, too, was removed from Myers's care. Later, as a troubled teenager, Christensen was convicted of manslaughter after stabbing a drug dealer to death on St. Patrick’s Day in 2011.

None of the accusations ever landed Myers in court. Christensen’s foster family did not want to put him through the trauma of an investigation, according to the Boston Magazine story.

Neither Warner nor Durant are aware of any recent allegations during the 2000s against Myers from Yeshiva Toras Chaim or any other school. Even so, Warner believes that it is important for parents to know if an admitted child molester is teaching their children.

“Beyond what it does for future possible victims…. Those of us who he got to did things like do drugs, be angry, fight and get depression," he says. "And it ruins people's lives. If that didn't happen, I wouldn't have gone through life feeling guilty — like I did something wrong."