Celebrate Father's Day and Life Itself With Adam Cayton-Holland 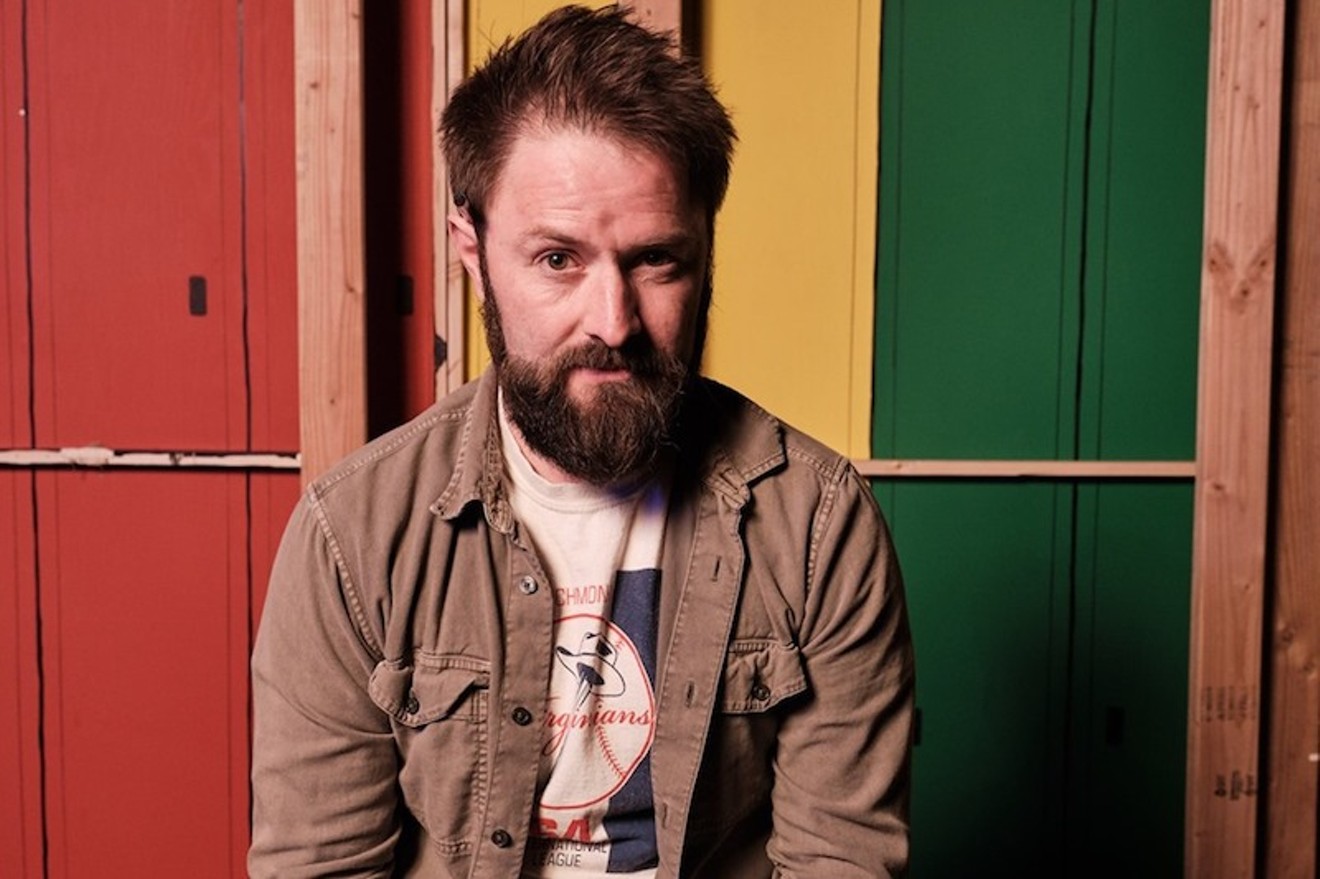 Andrew Bray
Rising from the ashes of the cancellation of Those Who Can't like a dick joke-disseminating phoenix, Adam Cayton-Holland — comedian, author, sitcom co-creator and former Westword scribe — is back and wholeheartedly embracing the city that raised him. The monthly Grawlix comedy show, which Cayton-Holland runs with friends and co-hosts Ben Roy and Andrew Orvedahl, has settled nicely into its old home at the Bug Theatre, and the Denver native has some huge projects on the horizon, including a repeat appearance at the prestigious Just for Laughs comedy festival in Montreal, where he's slated to perform "Happy Place," a one-man show loosely adapted from his haunted yet hilarious memoir, Tragedy Plus Time.

We caught up with Cayton-Holland to discuss the latest developments in his hometown-championing career — including two shows for the new father on Father's Day weekend — as well as how to remain funny amid professional disappointment and personal loss.

Westword: How have the Grawlix revival shows been going? Has being back at the Bug provided the sort of homecoming you'd hoped for?

Adam Cayton-Holland: They've been a lot of fun! It's really great being back at the Bug Theatre. I feel as comfortable on that stage as anywhere in the world, and I know Ben and Andrew feel the same. Initially we were a little hesitant to do the live shows on a monthly basis in Denver again; there's always that sense of "You can't go home again," or "Haven't they already done that?" But we decided that was just stupid and self-imposed. We love doing these shows and we had the opportunity to start doing them again, so we decided why not? We missed doing them when we were making Those Who Can't.

The Grawlix also forces the three of us to write new material every month, which is huge. We had gotten away from that, being so busy. So we're just treating these Grawlix shows as a monthly playground for us to do whatever we want — no outside pressure, no network notes, just me and Ben and Andrew curating the best show we can and trying to make each other laugh. And The Bug has been so great. Alex [Weimer] is just the damned best. He lets us do whatever we want there. I love that theater: Support the Bug! We're there the last Saturday of every month. It's also been really great having Illegal Pete's as a sponsor again. They have supported us for so long, and it means the world to us. Because of them, we're able to fly out great comics every month, comics people should really have on their radar. So far we've had David Gborie, Lizzy Cooperman and Nick Vatterot — this month we have Debra DiGiovanni, who is amazing. And, of course, having my partner in High Plains [Comedy Festival], Karen Wachtel, help out with the Grawlix shows makes everything so much easier.

Tell us about "Happy Place," the one-man show you're working on. Is it based on the experiences you describe in your memoir?

After my book came out, several comedy friends of mine who I really respect were encouraging me to take a crack at doing a one-man show about the loss of my sister. After she died, I never really talked about it on stage. Or much at all. I wrote things here and there; that was my way of processing it. And then the book was my real attempt at healing, so I thought writing the book would kind of get rid of that desire to talk about it. Like, okay, I've written about it, it's normalized, it's out there, this is part of me and part of my life story. Time to move on.

But if anything, after the book came out, I felt the urge to talk about it more on stage. And I wanted to challenge myself in comedy. So the one-man show "Happy Place" is just that. It was naive of me to think I'd write the book and then be done with it. Losing Lydia was such a profound loss for me, it's something that will always be on my mind for the rest of my life. I'll never be healed, I'll never be not working through it in one shape or another, so the show is my current attempt at that. I've run it a few times, and it's been really intense and emotional each time, but also really satisfying. And cathartic. And actually funny. A guy came up to me after the last show and said, "I can't believe you just talked about mental illness for an hour and made me laugh." I was like, "Can I use that on the poster?"

I just found out that I got into Just for Laughs this year in Montreal. So I'm going to run the show there twice. I'm really excited about that. It's kind of a really sad sort of full circle: In 2012 I was chosen to be a New Face in Montreal. I went up there, made my debut, then I came home and my little sister took her own life. Seven years later, I guess I'm going back to Montreal to talk about it a little bit.

Speaking of your memoir — and congratulations on the Colorado Book Award — has the promotional process been emotionally taxing? It can't be easy to spend so much time discussing such painful memories.

The bulk of that promo is over. I still get asked to speak here and there on mental illness, and I have a few things coming up around the book, but it's wound down for the most part. The strange thing is that while the promotion was definitely emotionally exhausting, it was also kind of just fine. The loss of one's little sister to suicide is not something you stop thinking about. Ever. So when people ask you about it over and over again, in a way, it's like, "Well, this is what I'm thinking about a lot of the time anyway, so, yeah, let's talk about it." The book was my way of saying yup, this happened, I'm not ashamed of it, here's the story, it's all out there, it's part of me and my life. That normalization — even with the questions that came with the promo — has been helpful to me in the ongoing healing process.


In addition to running your one-man show [at Buntport Theater], you'll also be headlining Comedy Works on Father's Day. What are your plans for the hour you're currently fine-tuning? Do you have a TV special on the horizon?

The hour I'm fine-tuning currently will definitely be an album, and perhaps a special. A few things coming together still. Fingers crossed!

On the subject of Father's Day, how has fatherhood shaped your approach to standup?

It's shaped my approach in that I now come at everything with about four or five hours of less sleep. No joke, it's made my shit way more bizarre and absurd. Maybe that's just the slap-happy joy of having a new little kiddo. But I swear, ever since my son was born, everything I've written has been fucking weird in a way I kind of love. I'm not questioning it — just riding the sleep-deprived wave.

I can't imagine how disappointed you guys must have been when Those Who Can't didn't get picked up for a fourth season, but you all seem to be thriving anyway. Have there been any silver linings among the aftermath of cancellation?

Yeah, it was super-disappointing, for sure. Seasons one and two, we'd all tour around doing comedy individually, and if there was a Those Who Can't fan in attendance at one of our shows, we would text each other, because it was that rare and exciting. Season three, everywhere we went, there were dozens of Those Who Can't fans at our shows, to the point that we would stop texting each other, or at least wait until we saw one another in person to tell one another about it. Suddenly it was like people were actually watching the show! It's working! It's working!

And then they pulled the plug. Which sucks, because I really thought we were hitting our stride in that third season. It felt like the pacing was right, and I felt like it was becoming this really strong comedy ensemble where everyone was learning how to mine the best laughs out of their characters. I love the world we built. But what can you do? We got to make three seasons of TV and I'm really proud of what we did. How many people can say that? I think the silver lining has been all the friendships that we made out of the show, and all the comedy connections we made with people who we were just fans of beforehand.

And Ben said this once, but I really like it: The silver lining is that we're still really good friends. Making a TV show is fucking stressful and hard, but we never lost sight of the fact that it was our friendship that made this whole thing happen. We always had each other's backs. So I'm really happy that we still are so close that we want to do a monthly show together. Nobody makes me laugh harder than Ben and Andrew, so it's great that we get to still do our dumb bits and skits together.

Do you have any other projects coming up that you want to mention before we wrap up?

I have several things I'm working on, but if there's one lesson I've learned in Hollywood, it's don't talk about it until it's in the can and on the air. A lot of stuff can go all sorts of sideways in between. Hopefully I can tell you all about it sometime soon! In the meantime you can find me on the 16th Street Mall, selling my signature brand of ACH vapes!

Adam Cayton-Holland will perform "Happy Place" at Buntport Theater, 717 Lipan Street, at 8 p.m. Friday, June 14; visit Buntport's events calendar to buy tickets, $12, and learn more. He'll also be appearing at Comedy Works Downtown at 7 p.m. Sunday, June 16; get tickets and further details on the Comedy Works box-office page.
KEEP WESTWORD FREE... Since we started Westword, it has been defined as the free, independent voice of Denver, and we'd like to keep it that way. With local media under siege, it's more important than ever for us to rally support behind funding our local journalism. You can help by participating in our "I Support" program, allowing us to keep offering readers access to our incisive coverage of local news, food and culture with no paywalls.
Make a one-time donation today for as little as $1.