The 21 Best Events in Denver, November 27 Through December 3 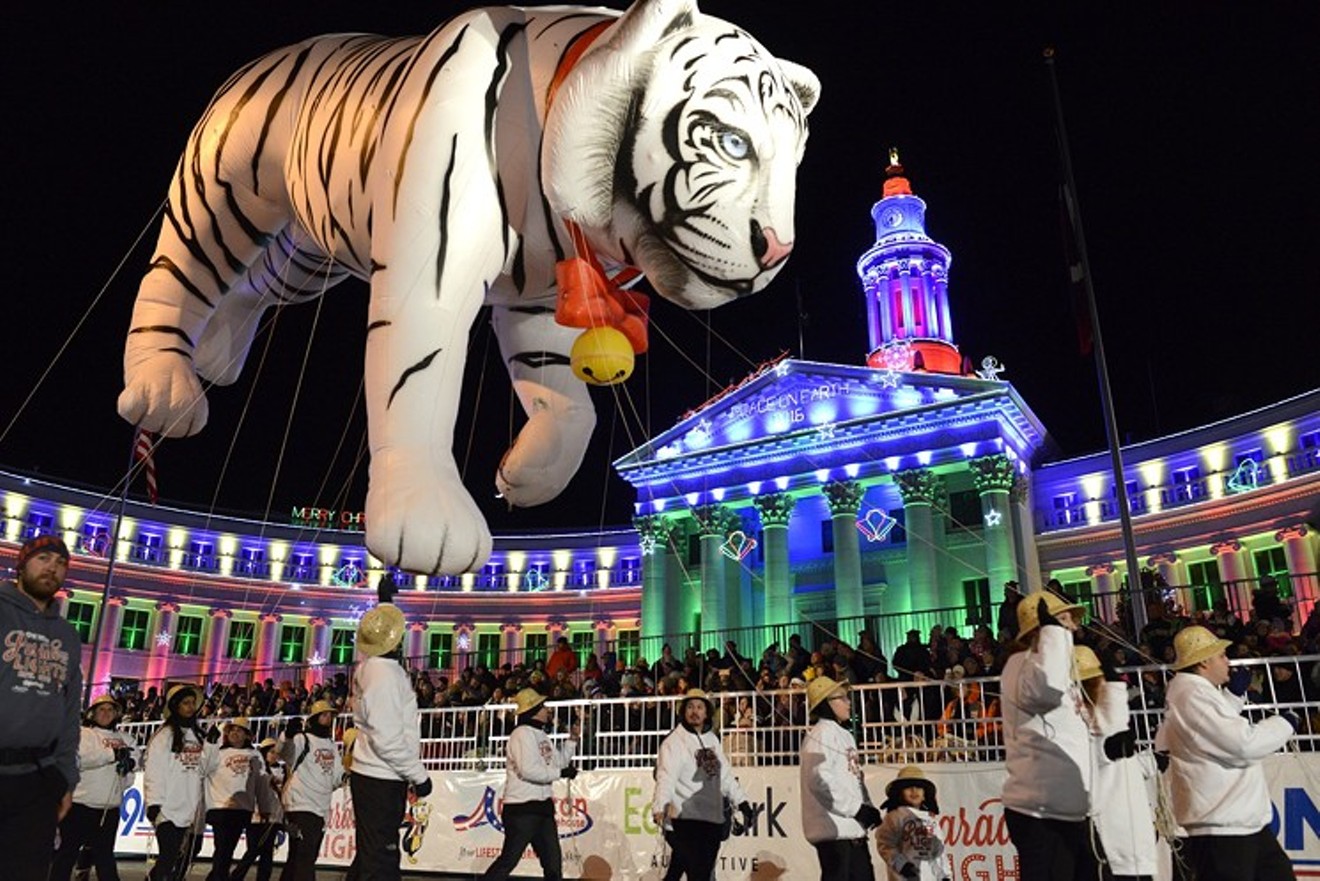 Let there be lights! Once again, the Denver City & County Building is lit up like a garish birthday cake (grab a slice during the Parade of Lights), and that's just the start of the illuminated extravaganzas around town. But there are plenty of bright entertainment options all over the city that have nothing to do with the holidays. Keep reading for the 21 best things to do this week — some naughty and many very, very nice.

This is #Giving Tuesday, a national charity campaign...and the ideal time to get ready for Colorado Gives Day on Tuesday, December 4. To encourage you to donate to your favorite charities, Governor John Hickenlooper will be at a Colorado Gives Day rally on the west steps of the Colorado State Capitol on Tuesday, November 27, at 11 a.m. After you're fired up to help out, go to ColoradoGives.org, an online giving resources website listing more than 2,400 nonprofits, and schedule your Colorado Gives Day donation.

Bistro Vendome
You probably don't encounter too many restaurant dinners that come with built-in literature, but Bistro Vendôme has just the right experience for gourmands who also happen to be book lovers. Chef Ben Ashworth's four-course dinner, which rolls out at 6 p.m. Tuesday, November 27, at 1420 Larimer Street, comes with a copy of the novel The Gray Fedora signed by its Colorado author, Jude Randazzo. The events of the book take place in Sicily during the island's independence movement in the 1860s, so Bistro Vendôme is adding Sicilian influences to the evening's menu. The book-and-dinner combo rings in at $92 per person; make your reservation at [email protected] or 303-825-3232. It's a night when you can say both "Bon appétit!" and "Buon appetito!"

There are numerous wicked villains in cinema history; Lex Luthor, Gargamel and Darth Vader are just a few examples. But who’s the biggest bad guy of them all, the one few filmmakers have risked taking seriously because he teeters on the preposterous? That’s right: Satan, the bogeyman’s bogeyman and star of the Filipino horror movie The Killing of Satan does. Is it a good film? Not so much. Does it make sense? Well, not really. But for those seeking an over-the-top gorefest and a grotesquely good time, The Killing of Satan is not to be missed. The movie, part of the Alamo Drafthouse's Terror Tuesday series, shows at 7:30 p.m. Tuesday, November 27, at the Littleton Alamo, 7301 South Santa Fe Drive. Get tickets, $10, and more information at drafthouse.com.

Screwtape has garnered respect from promoters for its tireless work ethic and commitment to building the DIY scene. The band has been keeping hardcore alive for up-and-coming generations at all-ages shows that provide fans with the kind of catharsis these bleak days demand. The group will celebrate the release of its new EP, Static — a compilation of four furious songs with screeching vocals, a battery of drums and noisy driving guitars and bass — starting at 7 p.m. Wednesday, November 28, at the Oriental Theater, 4335 West 44th Avenue. The lineup includes Texas band Noogy along with World Movement, Dox and Hyfy. Tickets are $9 online at theorientaltheater.com or $12 at the door.

A group of artists in Santa Fe, frustrated by the lack of access to the art world, decide to form their own collective and name themselves Meow Wolf. Their plans for a giant, immersive installation spark the interest of George R. R. Martin, creator of Game of Thrones, and their House of Eternal Return nets rave reviews and offers to take their act around the country. Only in Hollywood, right? But this story turns out to be true, and in 2020 it will add another chapter when the massive Meow Wolf Denver opens. But you don't have to wait until then to discover the odd animal that is Meow Wolf. Catch a one-night only screening of Meow Wolf Origin Story, at 7:30 p.m. Thursday, November 29, at the Denver Pavilions downtown, Regal River Point 14 at 3565 South Platte River Drive and the Belmar 16 in Lakewood. Get tickets at fathomevents.com.

Ring in the holidays at Bach for the Holidays, a trio of concerts by the Baroque Chamber Orchestra of Colorado during which the musicians will interpret classic compositions on period-appropriate instruments. As the night's name implies, the works of Johann Sebastian Bach will dominate a program that includes the Old Wig's Cantata 51 and Orchestral Suite No. 3, followed by select Messiah arias, written by Bach contemporary George Frideric Handel. The series kicks off at 7:30 p.m. Thursday, November 29, at Bethany Lutheran Church, 4500 East Hampden Avenue, and sounds off at the same time Saturday, December 1, at Montview Boulevard Presbyterian Church, 1980 Dahlia Street, then winds down at 3 p.m. Sunday, December 2, at Central Presbyterian Church, 1600 Sherman Street. Visit bcocolorado.org to buy tickets, $12 to $32, and learn more.

Anyone who’s spent time behind bars knows that the food there is neither good nor healthy. For pregnant women, the situation can be dire, a problem that the new organization Farm to Prison aims to fix by bringing home-grown food to expectant mothers in jail. The group will launch with a fundraiser from 4 to 9 p.m. on Friday, November 30, complete with a silent auction that includes items from Rosehouse Botanicals, Wool and Hammer, and Collective Light, among many others; local acts Rare Byrd$, Shocker Mom and Sidhe Wyly will perform between 6 and 9 p.m. It's all at Roostercat Too, 1045 Lincoln Street; find more information at farmtoprison.org and the Roostercat Too Facebook events page.

MCA Denver’s goal of inclusivity has always included younger art audiences: young professionals and members of the creative community fresh out of art school. But most impressive are MCA’s programs for teens, which encourage the next generation of potential museum-goers to look at art with an open and critical eye. In Still Loading, a DIY crowd of teen mentees will display their growth and progress as artists exploring a grownup world. The show opens with a reception at 6 p.m. Friday, November 30, and runs through January 6. The MCA is at 1485 Delgany Street, and admission is always free for teens. Learn more at mcadenver.org.

Resisting the sweep of the holiday season is futile once November crosses into December, so lift your spirits and join the procession for Denver's 43rd Annual Parade of Lights. Sponsored by 9News, American Furniture Warehouse and the Downtown Denver Partnership, the parade, which boasts marching bands, lavishly decorated floats and appearances by Santa Claus and Mayor Waddles the Penguin, will wind through downtown streets. The marchers get on their merry way at 8 p.m. Friday, November 30, and return for another lap at 6 p.m. Saturday, December 1, wrapping things up at Civic Center Park on both nights. While you can always secure a spot along the parade route for free, you can also splurge for a higher and more comfortable vantage point on the 9News grandstand for $16 to $19, if you act quickly (space is limited). Visit the Downtown Denver Partnership events calendar for more details.

Courtesy of Buntport Theater
Those painstakingly constructed dioramas at the Denver Museum of Nature & Science mimic life, but on the other side of the glass, it's clear that there’s nothing alive in there. The narrative is both creepy and fascinating, especially when you throw in a twist, as Buntport Theater does in Coyote. Badger. Rattlesnake, a collaboration with Denver playwright Ellen K. Graham. In the show, two museum dioramists confront their awkward role in bringing stuffed, dead creatures to life, which can only lead to weird but hilarious results. The play opens for fourteen performances at 8 p.m. Friday, November 30, and offers a breath of holiday-free fresh air through December 22. Admission is $25 on opening and closing nights, and $15 to $20 otherwise — or pay what you can on December 6 and 10. The theater is located at 717 Lipan Street; get more details and tickets at buntport.com.