The 2020 festival was a success, and murals from the event still cover the walls in the area, bringing vibrancy to the neighborhood. But that was only the beginning, says Vega, who curates for Aurora's arts center, the People's Building.

Casey Kawaguchi created this mural last year for Colfax Canvas.
Colfax Canvas
This year's fest includes a new application and selection process to engage the community in choosing artists, as well as a focus on diversity and the importance of ancestry in artists' identities and works; one uniform stipend for all participating artists; fully collaborative murals for all artists; and a block party complete with music, food and drinks for the neighborhood and visitors alike.

Murals and mural festivals have become points of controversy in some neighborhoods over the past few years. Veteran artists worry that the younger generations are losing an understanding of how public art should be used to honor and preserve neighborhood cultures rather than erase them, while residents and critics argue that bringing in outsider muralists and visitors can contribute to gentrification.

Vega recognizes these challenges and nuances of public art. He says the festival aims only to improve the neighborhood and how its residents feel, rather than to gentrify the community. Part of that is recruiting a crew of artists as diverse as the neighborhood itself.

Foo, a creator, event producer and member of the Black Actors Guild, and Vega, established an Inclusion, Diversity, Equity Advisory (IDEA) committee as part of the event.

A newly created selection committee made up of arts organizations in the community used a rubric to determine which artists made the cut based on specific criteria rather than simple aesthetics. The result of these changes is a diverse and stunning mixture of mostly Denver-based artists, from Lakota mixed-media artist Danielle SeeWalker to graffiti artist Devin Urioste.

"It's one of the most diverse neighborhoods in the state, and actually the country," Vega muses, "so how can we represent communities there? We've been very intentional about everything, from making sure the DJ was a woman of color to our selection process." 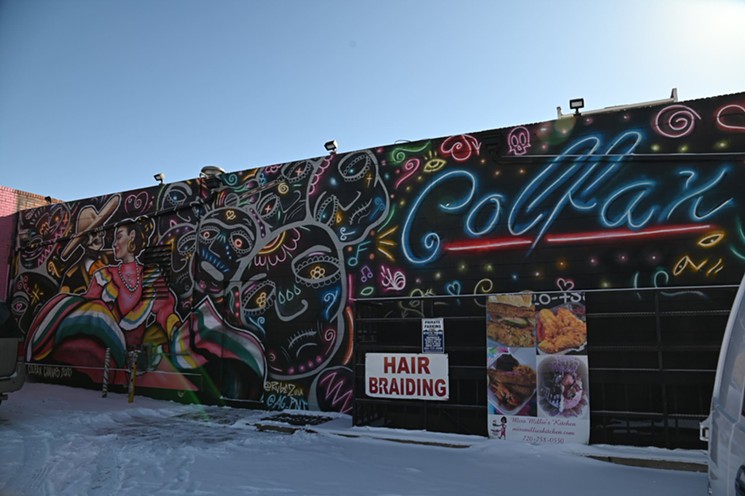 A collaborative mural by Aaron Golbeck and RubeZilla seems to illuminate a building.
Colfax Canvas
And while the creators are excited to see visitors come from all over to admire the art that will go up, Vega says the focus remains on how to better the neighborhood. In fact, one of his favorite parts about last year's festival was seeing people experiencing homelessness or extreme poverty engage with the murals.

"That was such a cool thing, to watch folks realize that they're allowed to have even an opinion about art," says Vega, who gets emotional just thinking about it. "Somebody going through hardship or really struggling with mental illness or addiction or one of a myriad of issues in any low-income area or, honestly, any metro area, period, across the world — them forming an opinion about art like that...it sounds so simple and basic to most of us, but it was something that really spoke to me.

"I think we have an opportunity here to really engage with the neighborhood and make things about the folks that live here," he adds.

The Colfax Canvas Mural Festival runs from Friday, September 3, through Sunday, September 5, at 9995 East Colfax Avenue. For more information and a full schedule, visit the Colfax Canvas Mural Festival online.
KEEP WESTWORD FREE... Since we started Westword, it has been defined as the free, independent voice of Denver, and we'd like to keep it that way. With local media under siege, it's more important than ever for us to rally support behind funding our local journalism. You can help by participating in our "I Support" program, allowing us to keep offering readers access to our incisive coverage of local news, food and culture with no paywalls.
Make a one-time donation today for as little as $1.