The Henry Treat Rogers Mansion was at 1739 East 13th Avenue. YouTube
Every old home deserves a ghost story — something that recalls its history, usually at its most tragic moments, but sometimes just when a former inhabitant refuses to leave. Consider it an undead history lesson: We are neither the beginning nor the end.

I grew up in a haunted house. It was a white, two-story Victorian in a small farm town in the Midwest that had been built by the local banker for his wife just barely after the start of the twentieth century. She loved that house to such a degree that she never left it. I was five; I saw her in the upstairs hallway, from which she’d peer into my bedroom at night. She’d most often come down the main staircase, gliding down to the first landing, turning the corner, disappearing at the second. That was where my aunt and uncle saw her on the last night they babysat for my siblings and me in that house. After that, they watched us at their place. The last time I saw her, she was tripping down the narrow stairs that led from the kitchen to the upstairs hallway. I wasn’t supposed to be using that unfinished hallway — called the servants' stair — but I did, all the time. I saw her at the top of the stairs looking down at me, saw her walking down, lurching forward, disappearing. Years later, doing some research for a novel I was writing, I learned that she'd died in the house in an undefined accident that broke her neck. I didn’t have to wonder how it happened. I’d seen it. 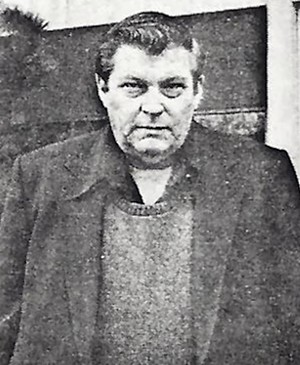 Russell Hunter, composer and storyteller.
YouTube
Denver has its share of these old houses. Most locals know the usual Mile High mansion haunts: the Lumber Baron Inn, the Peabody-Whitehead, the Grant-Humphreys, the Croke-Patterson, the Byers-Evans, the Molly Brown House, nearly anything around Cheesman Park. Many are still standing in various states of repair, much to the benefit of those who care about Denver lore.

One that isn’t there any longer was the inspiration for the 1980 horror movie The Changeling, starring George C. Scott. The narrative of that story was largely cribbed from the tales told by Russell Hunter, a composer of note when he relocated to Denver in 1968. He moved into the Henry Treat Rogers House, an 1892 Federalist home on the edge of Cheesman Park built for the railroad tycoon who also founded the Denver Country Club and the University Country Club.

Hunter reportedly started experiencing phenomena much like that endured in the film by the George C. Scott character, also a composer looking for some quiet into which to spill his new music. He heard the sound of bouncing, repeated bouncing, coming from what he thought was the attic. He and an architect friend discovered a sealed-over door in the back of an upstairs closet that led to a solitary room. It’s said that when they cracked the door open, a red rubber ball came down step by step and then vanished. This occurred twice, or so the story goes, before Hunter decided to plumb the dark corners of that once-hidden room.

Hunter claims to have found the diary of a young man who’d called that forlorn room his home. He wasn’t well, and lived in a state of near death. This worried his parents, who stood to lose access to the $70 million inheritance left to the boy by affluent relatives should he die, as the story goes. They responded by locking the poor boy in the attic with only a rubber ball for company, then adopting a boy of perfect health from a local orphanage and replacing him — hence the film's title.
When the bouncing still didn’t stop, Hunter decided he’d had enough and contacted a psychic medium. The story told by that spiritualist confirmed what the composer had read in the discovered diary, and also mentioned that the poor boy’s body had been unceremoniously discarded, buried somewhere in south Denver. Hunter claims that a boy’s skeleton — complete with a gold medallion that identified him as part of the wealthy family in question — was eventually dug up on the property once owned by a maid who worked for the family.

Nonetheless, nothing worked to stop the haunting. If anything, the activity increased, with Hunter’s piano playing on its own and noises in general around the house becoming more cacophonous. Hunter moved out soon after, and only a few months later, the Henry Treat Rogers Mansion was demolished to make way for an apartment complex (now Summer House Condominiums) at East 13th Avenue and Williams Street. Hunter even purported in some retellings that when it was demolished, part of the mansion exploded violently, killing a hapless construction worker.

Few of these details can be confirmed. The Denver Public Library has no record of Hunter ever living at that address, though it's possible that he did. And according to Phil Goodstein in his book Ghosts of Capitol Hill, there was no family with a net worth of $70 million in Colorado during the late 1800s and early 1900s. The boy’s age tended to change from one retelling to the next, ranging from as young as eight to as old as his early teens, as did the nature of his sickliness. And so on. But if the story is good — if it lingers long enough — in the end, it doesn’t much matter what can be proven.

Everyone we know has a ghost story, even those who claim not to believe them. We pretend they’re out of the ordinary because it makes us sleep better when we hear a noise in the night, because it allows us to ignore the shifting shadows of a darkened room. Because we want to know the world and believe that it’s not full of mysteries.
KEEP WESTWORD FREE... Since we started Westword, it has been defined as the free, independent voice of Denver, and we'd like to keep it that way. With local media under siege, it's more important than ever for us to rally support behind funding our local journalism. You can help by participating in our "I Support" program, allowing us to keep offering readers access to our incisive coverage of local news, food and culture with no paywalls.
Make a one-time donation today for as little as $1.