Skye Barker Maa is the owner and founder of Factory Five Five. From The Hip Photo
If you climb the stairs of Aurora's Stanley Marketplace on a Sunday afternoon, making your way past a glowing, neon pink "Factory Fashion" sign, you'll enter a Willy Wonka-like world of imagination. Gleeful masked children run around trailing bolts of colorful fabric. Plain white shoelaces are dyed and laced into corsets. Ripped fishnet tights become a mesh crop top. An old prom dress is turned inside out, recut and resewn into a beautiful gown fit for a princess — or in this case, a queen.

The wonderland is Factory Fashion's Drag Tween-Teen fashion program, a class offered through the music and arts hub Factory Five Five. The brainchild of Skye Barker Maa, Factory Five Five aims to be community zone for artists of all ages, currently offering classes in film, theater and fashion.

Maa started her journey as an "arts entrepreneur" in 2013, when she opened a music and arts school called Neighborhood Music in her home. "We started theater the first year out. We were doing full production in my backyard, wiring lights to my balcony, and live bands, which my neighbors were not appreciative of," Maa says with a laugh.

Neighborhood Music moved into its first commercial space in 2015 before moving to Stanley Marketplace in 2018. Then the pandemic brought a surprising windfall of new students. The Stanley provided Maa with more areas, but the program outgrew those, as well. She decided to open another space down the street from Neighborhood Music to expand her class offerings with Factory Five Five.

The expansion didn't stop there. Factory Fashion classes exploded in a way Maa never anticipated, and it quickly became clear that Factory Five Five couldn't house all the cutting tables, sewing machines, irons and other equipment the students and instructors needed. She turned that space into a black box theater and moved Factory Fashion into its own space on the second floor of the Stanley.

Maa is grateful that the Stanley has been fully supportive of her many endeavors, especially the Drag Tween-Teen fashion program. "The Stanley is a very progressive place, with very progressive leadership, too. They were so stoked when we launched this program," she says. "Part of the reason they let me keep signing leases all over the place is because they like that we're doing unique and progressive stuff." 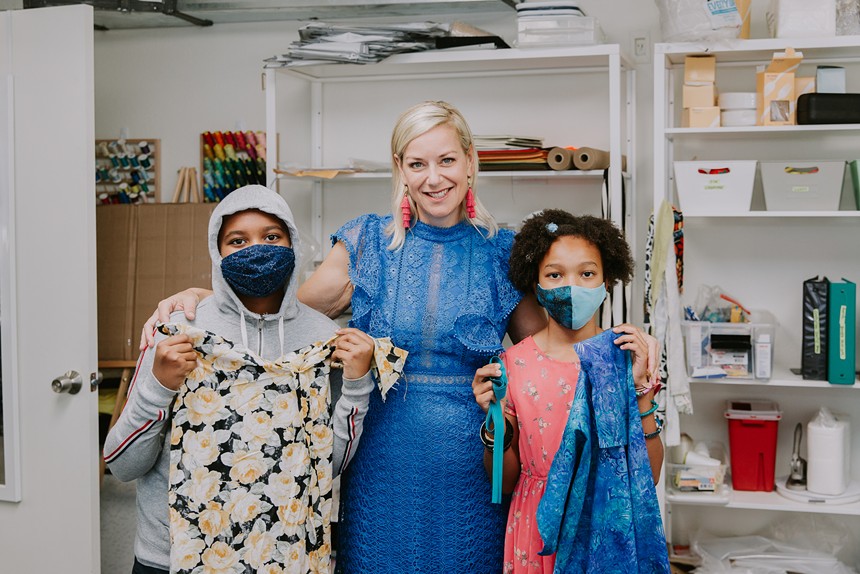 Maa poses with two students showing off their handiwork.
From The Hip Photo
When Maa decided to host more fashion programs, including the Drag Tween-Teen program, she hired drag queen Diamond Starr (aka Charlie Fleming) and fashion designer Darlene C. Ritz to instruct the classes.

Maa designed the curriculum for the drag program after she asked several drag performers what tough skills they wish they had learned earlier so she could pinpoint what would be most helpful to students. In addition to sewing skills, the drag students learn performance tips and skills, such as wig stacking and makeup blending. Often, the students in other classes will pop over to watch or ask questions, which is exactly why Maa wanted multiple classes to share a space. "The drag program isn't happening on Wednesdays when nobody else is here. It's happening in the middle of everything," she emphasizes.

The program offers more than just the opportunity to learn artistic skills. Making your own clothes can help foster a more positive relationship with your body, which is especially important for queer youth who may also be struggling with gender dysphoria. By taking their own measurements, students are able to bridge the sometimes disorienting gap between what they see in the mirror and their physical bodies. Darlene C. Ritz is a fashion designer and one of the instructors at Factory Fashion.
Evan Jensen Photography
Students are also taught the importance of sustainable and ethical fashion. Ritz does so by explaining the real-world costs of materials and labor through cost sheets so students "understand that when you buy cheap, the people who are making that are getting paid pennies." The programs also heavily encourage upcycling, and Ritz teaches a class about making the most out of old or used clothes.

Maa uses items from her own wardrobe to demonstrate the difference in quality between high-end and fast-fashion apparel. "The students now have a base knowledge, and they can actually see the quality difference," she says.  "What we're teaching here is also creating a more sustainable world, because they are seeing the difference from a fashion standpoint, and hopefully it's influencing their future decisions."

But most important, Factory Fashion gives queer youth a place to interact with other queer people, from their peers to adult role models, like Starr. In the Factory Fashion classroom, queer identity is not just normalized; it's celebrated. The Drag Tween-Teen program culminates in a finale show on Sunday, January 30, at 6 p.m., where the students will give lip-sync performances in outfits they designed and sewed themselves.

"One of the things I'm learning from the kids is it's not just the skills that interest them. When I throw tidbits of gay history in there, they soak that up," Starr says. "It's more than just the skills. It's also the culture."

Teaching drag in a classroom setting is a radical departure from the traditional structure of a drag house, where a "drag mother" chooses individual performers to adopt and mentor. "Most of the time in drag culture, it's passed down from generation to generation, and you teach it individually," Starr explains. "I never thought I'd be able to teach kids as a group, and that's amazing to me."

Starr, who is nonbinary, gives each of their students a packet that includes drag tips and tricks, workbook pages to sketch new ideas, plus a list of mental health resources and local LGBTQ+ organizations in case they are looking for more support.

"Skye is creating a safe space where Diamond and I can come in and work with these kids, and they have a place where they can be fully and authentically themselves," says Ritz. Ritz and her colleagues know firsthand how safe, supportive spaces can make a difference in a child's development.

"I've found this place so cathartic in my own life, because I didn't have a safe space growing up," Starr says. "I'm 36, and just now, in the last year and a half, have I been able to accept the fact that I'm nonbinary. Before, there wasn't even a word for it. It's awesome to see these kids knowing who they are at such a young age."

All of Factory Fashion's classes end in a final runway or performance.
From the Hip Photo
Ritz reflects on how refreshing it is to see how times have changed. "I remember my five-year-old son getting shamed for wearing blue nail polish to tae kwon do, and getting shamed for loving the movie Frozen. Somebody at school teased him for liking a 'princess movie,' and all of a sudden he hated that movie, and it had been such a joy to him," she says. "So this has been changing in the past ten years."

Because Factory Fashion encourages its students to have open conversations about sometimes difficult topics, Maa hopes to be able to incorporate mental health professionals into the curriculum. "We want to talk about culture, and we want to have these more metaphysical conversations about gender, because I think that's important, and I'm happy to bring someone in to talk about that," she says. "As a group, we're having that discussion anyway. So as a staff, we're already talking about bringing some professionals in to help us maneuver some of these conversations, so that it's comfortable not just for the student having them, but also the students around them."

Maa has faced some negative feedback about the drag program, but she says the overwhelming amount of support has far outweighed any ignorant comments. "We posted some ads that I had to take down, and it wasn't rampant, but there were just three or four people who were posting some things that were offensive on our ads," she says. "I took the ads down and basically went to the community and said, 'Listen, I'm not going to run this ad anymore because I don't want the comments to gain traction, so if anybody shares this five times, we will comp somebody into the drag program.' It got shared so many times that we couldn't find enough kids to comp. I'm literally sitting on seven scholarships."

"For the drag program, especially, every day someone thanks me for doing it," says Maa. "People are messaging me, and they're just glad there's a safe space nowadays."

"That's what I keep hearing," echoes Starr. But the experience has proved to be just as valuable for the instructors as it is for their students. "To be honest," Starr continues, "You guys have changed my life a lot. These kids, and what I'm learning from them — they're teaching me just as much."

Says Ritz: "I can't leave the teaching room, because these kids are so inspiring, and they keep me connected. Watching these kids grow and learn, I'm always going to have to have that in my career."

Drag Tween-Teen finale show, 6 p.m. Sunday, January 30, Factory Fashion, 2501 Dallas Street, Suite 200, Aurora. For more information on Factory Fashion and its class offerings, visit the Factory Five Five website.
KEEP WESTWORD FREE... Since we started Westword, it has been defined as the free, independent voice of Denver, and we'd like to keep it that way. With local media under siege, it's more important than ever for us to rally support behind funding our local journalism. You can help by participating in our "I Support" program, allowing us to keep offering readers access to our incisive coverage of local news, food and culture with no paywalls.
Make a one-time donation today for as little as $1.