Installation view of Lorelei Schott’s “Barriers and Obstacles” series, mixed media on panels. Mike McClung
The appeal of forms and images found in nature is strong, especially in a tree-hugging place like Colorado. After all, reports of the stunning views of the Rocky Mountains brought the first painters to this region in the nineteenth century. Since the 1930s, however, the creative influences emanating from our views and vistas have not been limited to landscape painters, but have extended to artists interested in deconstructing, conventionalizing and/or abstracting the natural environment. Those influences are clearly evident in the work of four contemporary Coloradans now on view in two galleries located on the same block of Santa Fe Drive; the artists source the environment for their chosen forms without depicting it.

At Michael Warren Contemporary, one of Santa Fe’s flagship galleries, two solos highlight artists turning landscapes into abstractions, but doing so in completely different ways. To the right in the sprawling space is Blowdown: New Works by Meredith Nemirov. The artist, who has a studio in Ridgway, has been exhibiting her idiosyncratic paintings in Colorado since 1990; despite this long track record, she had rarely showed in Denver, and then usually only in group exhibits. A few years back, though, Michael Warren Contemporary hosted a solo titled Tree Stories that helped raise Nemirov’s profile around town. As suggested by the title of that first solo, Nemirov’s signature style is typically inspired by single trees or entire forests that she reduces to simple shapes aggregated to create her compositions. Most of the paintings, mixed-media pieces and works on paper seen here are based on an area of timber fall that Nemirov came across in the southern Colorado mountains; at some point, a microburst or some other strong surface wind dropped hundreds of trees, creating a blowdown.

"Blowdown: Feeding the Forest Floor," by Meredith Nemirov at Michael Warren Contemporary.
Mike McClung
A set of six small, square paintings in watercolor, gouache and ink on paper placed on boards, subtitled “Feeding the Forest Floor,” neatly lay out Nemirov’s aesthetic and narrative interests. She uses meandering lines and squiggly shapes to suggest the bark falling off the trees and the bacterial tendrils breaking down the wood. In “Untitled #II,” the overall view is suggested by simple brownish domes referencing the mountains stripped of their tree cover; at the bottom, a stack of cylinders stands in for a pile of fallen tree trunks. “Untitled #VI” offers a conventionalized closeup of a limb with the strings of microscopic life descending into the soil. Nemirov uses simple and tightly controlled pictorial elements to pull off superficially awkward formal relationships, and somehow it works.

Paintings by Lorelei Schott at Michael Warren Contemporary.
Mike McClung
Straight ahead in the gallery, Lorelei Schott showcases paintings by Denver artist Schott, who has been exhibiting around the area since the 1980s; she was part of the stable of the legendary Sandy Carson Gallery, which occupied the building where Michael Warren Contemporary is now. Schott’s latest efforts struck me as being something different for her, though gallery director Mike McClung points out that they’re sort of a return to some of Schott’s interests from those bygone Sandy Carson days. In the small collages from the “Barriers and Obstacles” series, Schott lays down an atmospheric ground that resembles the sky, though it comprises a range of colors. On top, she juxtaposes that airiness with jagged, hard-edged shapes often done in black, but also in turquoise, yellow and white. In these collages, the shapes mostly cover the grounds. But in her large, lyrical paintings, the brushy grounds of soft organic shapes predominate, and hard elements are used only minimally.
Both approaches lead to sensational results, and Schott has reinvigorated her oeuvre with this new work. 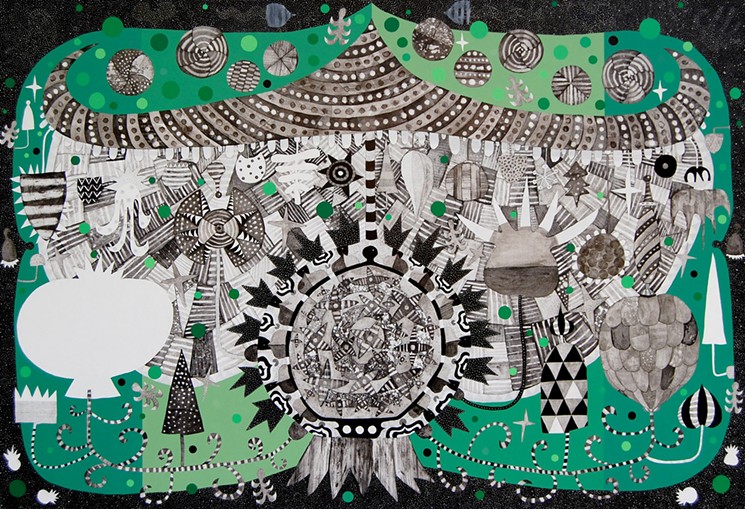 “Witch Doctor,” by Tommy White, acrylic and graphite on panel.
Mai Wyn Schantz
Several doors to the south is Mai Wyn Fine Art, with Mai Wyn Schantz’s studio in the back and a gallery up front. On view there is Organic Archetype: New Work by Julie Anderson & Tommy White, bringing together a ceramics artist from Steamboat Springs and a Denver painter, respectively. When I first heard about this pairing, I thought the show would be a rough mix, but in the gallery, the disparate work establishes something of a dialogue.

"Refugee" by Julie Anderson, ceramic sculpture, at Mai Wyn Fine Arts.
Mai Wyn Schantz
Anderson is clearly coming out of the vessel tradition but employs it to make sculptures, most obviously in the wall relief “Hybrid Vigor,” made up of dozens of small pots that flow like a swarm of bees across the wall; they’ve been mounted so that their openings face the viewer. Repeated forms are also key to the tabletop sculpture “Refugee,” essentially a simplified boat topped with five spheres. The boat shape and the spheres are inscribed with lines based on natural forms, including waves and leaves. The idea of the spheres being conveyed across the water adds a subtle political subtext to the delicately rendered and subtly hued piece.

The simple shapes and complex inscriptions that Anderson prefers link her sculptures to White’s idiosyncratic paintings. A professional artist since the early 1990s, White just moved to the area a few years ago. There’s a lot going on in his pieces, which are the apotheosis of a scribble with a dizzying number of individual strokes in graphite — so many that at first I thought they were painted over black-and-white abstract photos. White’s doodles create elaborately hieratic presentations of drawn elements arranged to look symmetrical; technically, though, they’re asymmetrical, since the various parts of the composition have been only loosely rendered. There’s also no strict one-on-one correspondence between the shapes on one side and those on the other, so the two halves don’t really mirror each other. In one spectacular example, “Witch Doctor,” in acrylic and graphite on board, the title character is a circle filled out with overlapping pinwheels, holding a ceremonial vessel in each hand. The whole scene is covered in little graffiti-like drawings (love the conventionalized Christmas tree), with the entire menagerie of elements topped by a canopy of two-tone green paint. This is one of White’s most effective pictorial devices: setting broad swaths of flat coats of colored paint over the crowded fields of frenetic scribbles done in black on white.

While none of these four artists attempts to render the landscape, all find inspiration in scenery, and then share that inspiration in very different ways.

Organic Archetype: New Work by Julie Anderson & Tommy White, through July 29, Mai Wyn Fine Art, 744 Santa Fe Drive, 303-893-4182, maiwyn.com.
KEEP WESTWORD FREE... Since we started Westword, it has been defined as the free, independent voice of Denver, and we'd like to keep it that way. With local media under siege, it's more important than ever for us to rally support behind funding our local journalism. You can help by participating in our "I Support" program, allowing us to keep offering readers access to our incisive coverage of local news, food and culture with no paywalls.
Make a one-time donation today for as little as $1.