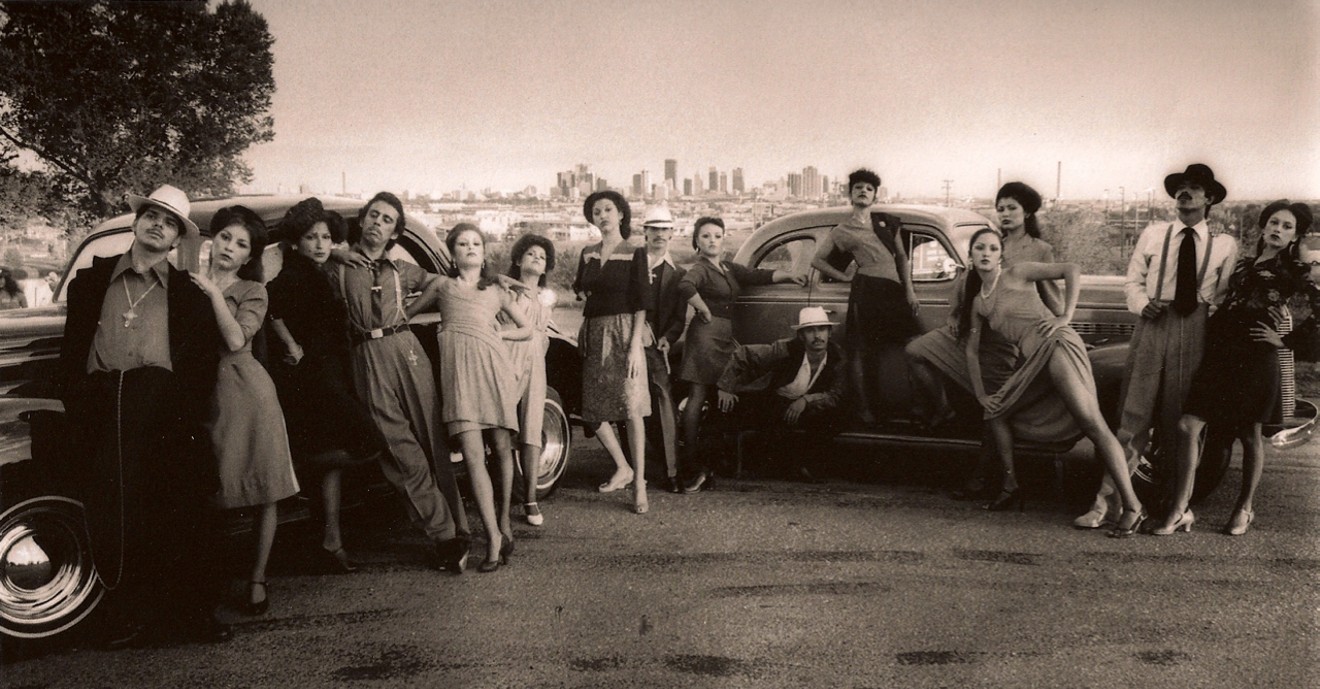 Museo de las Americas new exhibition Pachucos y Sirenas looks at 1940s Mexican-American counterculture in the Southwest. Daniel Salazar
In the 1930s and ’40s, being brown in the United States meant being unwelcome here, and in that climate, Chicano men and women known as Pachucos and Pachucas created a subculture that expressed Mexican-American pride. Museo de las Americas' newest exhibit, Pachucos y Sirenas, takes a nostalgic look at that era of Chicano history.

The show includes works about Caló, the slang that has shaped how Chicanos in the Southwest speak Spanish today, as well as rebellion and cultural pride. It explores the boundaries that Latina women push to reclaim their sexuality and individuality. Pachucos y Sirenas is also about the zoot suits and other fashion that came with that rebellion.

The show will spotlight artists including Justin Favela, Antonia Fernandez, Carlos Frésquez, Josiah Lopez, Jerry Vigil, and Daniel Salazar who have made works showing the impact that the Pachuco era had on the American experience. Also on the bill: fashion designers Cha Cha Romero and Alejandra Peralta, the Suavecito Car Club and artist Alfredo Cardenas. 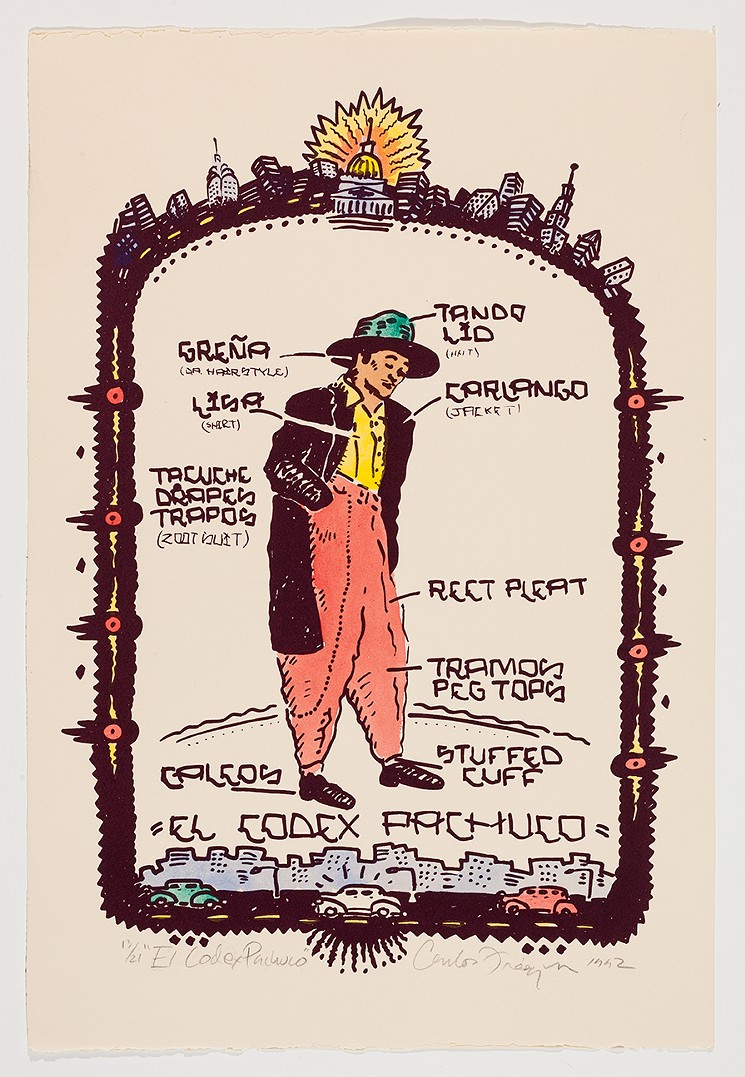 "El Codex Pachuco," by Carlos Frésquez.
Carlos Frésquez
On a recent mid-winter day, Favela — who hosts the podcast Latinos Who Lunch and has garnered acclaim for his fantasy-like renditions of familiar objects of Latinidad, created with cardboard, paper and glue — is finishing up his signature piece for Pachucos y Sirenas, a lowrider named “Sirena” made entirely out of piñata materials. He and his crew have spent a week constructing it, and as he works, he’s talking about “Fridalandia,” a recent installation at the Denver Art Museum’s Mi Tierra exhibition. That striking piece bears artistic and cultural similarities to his current work at the Museo.

“'Fridalandia' was inspired by an episode on our podcast where we broke down what Frida represents to people,” Favela says of the artist and subject of his piece, the Mexican painter Frida Kahlo. “She is not only one of Mexico’s famous artists, but she is almost like this saint for feminists, for queer people, for the outsider.” 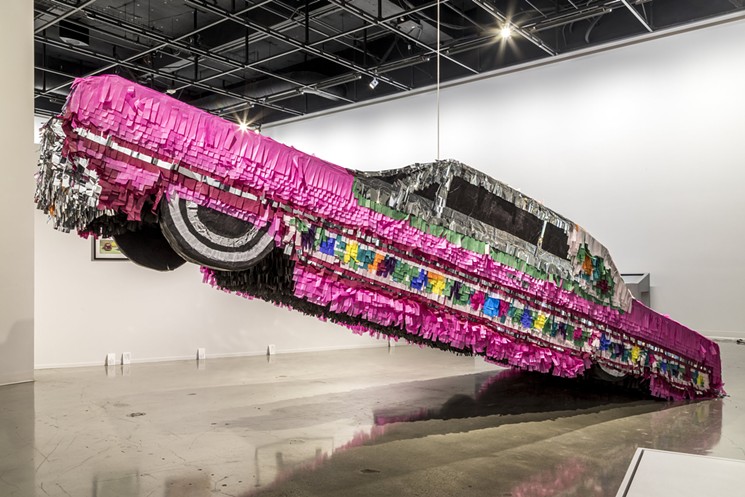 "Sirena"
Justin Favela
For Favela, Kahlo serves as an icon in which many of his personal and artistic interests meet. “I love pop culture, art history, exploring these notions of nostalgia, exoticism, appropriation and authenticity,” he says. “Frida touches on all of that, and I think a lot of my artwork is about that, too. I think we should be critics of our own culture. I think of identity as performance. That’s exactly what Frida was doing. I take a lot of notes from that.”

Favela says he has long been attracted to symbols of both Mexico and Latinidad in the United States, including piñatas and lowriders, which both shoulder a similar weight to Kahlo’s memory in pop culture. For that reason, he decided a lowrider would be the appropriate subject for a piece in Pachucos y Sirenas.

“All I ever knew about lowriders is what I saw in the media, in gangster movies, etcetera,” he says. “But lowrider culture is about family, religion. It’s about progress. The car is a symbol of American progress. It’s about making the most out of what you have, and we took that and made it our own.”

Pachucos y Sirenas runs from February 8 to May 26, with an opening reception from 6 to 9 p.m. Thursday, February 8, at Museo de las Americas, 861 Santa Fe Drive. There will be an artist talk at the Museo on Friday, February 9, from 6 to 8 p.m.

Eneri Rodriguez is a faculty troublemaker at the Institute for Women's Studies and Services at Metro State University Denver. She is into gender, horror movies, and music that gives a damn.
Contact: Eneri Rodriguez