And it's been perfect for the past half a century — a longtime anchor on the block, and the oldest nonprofit bookstore in Denver. Jack and his wife, Pam, who've volunteered at the store for forty years, handle its management these days.

“The secret to our longevity is that we essentially incur no expense for books and have no employees," says Jack. "We’re not a typical bookstore; by definition, we do not make a profit, and we are not owned by any individual or group of individuals. If we have an owner, you could say it’s the Park Hill community itself.”

Barbara Charnes was the store's first manager, back when a women’s center was headquartered in the basement and there was a pottery studio in the loft. In a 1994 edition of Footnotes, the store's newsletter, Charnes recalled how PHCB was developed over the years. “We had no carpenters, electricians, or plumbers in our group,” she wrote. “So psychiatrists, lawyers, and similarly unqualified neighbors wired, painted, built shelving, and messed up the plumbing.”

Amateur construction aside, there have been many changes to the store in the past five decades. “We shifted from new books to used books mostly,” notes Jack, “and developed a membership program that offered discounts and book credits. Up until recently, we dealt in cash only. When we decided to accept credit cards, some members felt that was troubling.”

Longtime members were also concerned when the store began dealing with Amazon, listing some wares on the Marketplace. Jack says that most of them have since “realized that being an Amazon merchant brought [the store] crucial supplemental income and opened up a market for books we wouldn’t normally sell.”

But the independent spirit of the shop remains strong, something that's evident in its day-to-day operation. “The store takes pride in its selection of local books,” says Jack, “including the encyclopedic Park Hill Promise, by gadfly Phil Goodstein, and The Park Hill Neighborhood, a Historic Denver publication by Tom Noel and William Hansen.”

Over the years, the bookstore became a hub for neighborhood families to shop for affordable and sometimes rare books.

“I remember one day an eight-year-old boy came up from the basement cradling a stack of books,” recalls Pam. He “took a deep breath, beamed, and said, ‘I just love the smell of old books.’” 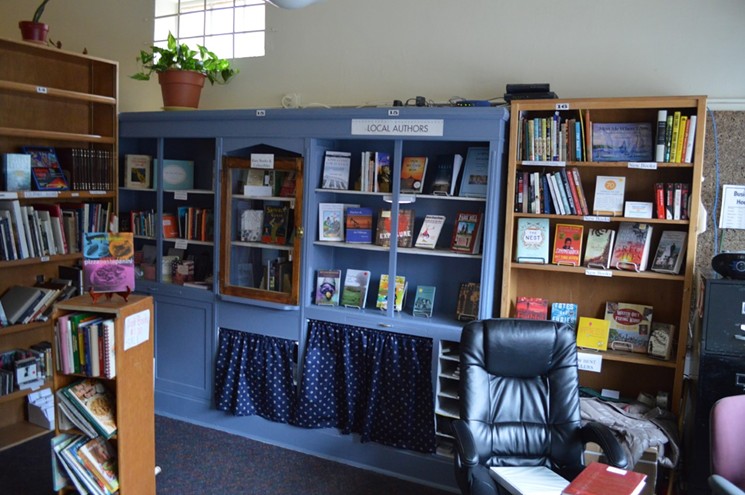 The interior of the Park Hill Community Bookstore.
Park Hill Community Bookstore
Jack remembers another Denver-specific moment. “I was closing up one day, and Governor John Hickenlooper knocked on the window,” he recalls. Hickenlooper asked if the store could stay open for a few more minutes, and Jack said, “’For the governor, I most certainly can.’ He bought about half a dozen antiquarian books and became a member. Nice guy.”

Former manager Mike Stickney remembers one of the many community outreach efforts in which the store was involved. “Our next-door neighbor, Tom Croghan, DDS, worked on dental problems with prisoners in several area penal institutions. We would assemble bags of paperback books for him to distribute among his shut-in patients. Prison officials only allowed paperbacks, as hardbacks could be used for weapons.”

“Our bookstore reminds me of that little engine climbing up that big hill, chugging, ‘I think I can, I think I can,’” says PHCB board president John Krause. “Some bigger engines, sidetracked or out of steam, didn’t make the climb.”

Park Hill Community Bookstore is a Denver gem.
Park Hill Community Bookstore
The store has instituted many ways to recognize its fiftieth, but perhaps the one with the greatest potential for staying power is the BookStory project, an effort to collect stories, anecdotes and poems about the store over the years. Not only will selections be published in future editions of the Greater Park Hill News, the neighborhood newspaper, but they’ll be archived and displayed permanently in an album at the store itself.

“Overall, the bookstore continues because our volunteers and members have a mutual love of books and the special place they have occupied and will continue to occupy in our culture,” Jack says. “The store is a kind of foster parent for books; we provide a temporary, loving home for them. Fifty years from now, we believe that the love of books — actual books you can smell and feel and thumb through — will continue.”

Park Hill Community Bookstore is still looking for your BookStory. For more information, or to send your tale directly, email the store at [email protected] The shop is currently open for limited hours; see the website for more information.
KEEP WESTWORD FREE... Since we started Westword, it has been defined as the free, independent voice of Denver, and we'd like to keep it that way. With local media under siege, it's more important than ever for us to rally support behind funding our local journalism. You can help by participating in our "I Support" program, allowing us to keep offering readers access to our incisive coverage of local news, food and culture with no paywalls.
Make a one-time donation today for as little as $1.