Roger Gastman on Wall Writers and the Roots of Graffiti Art 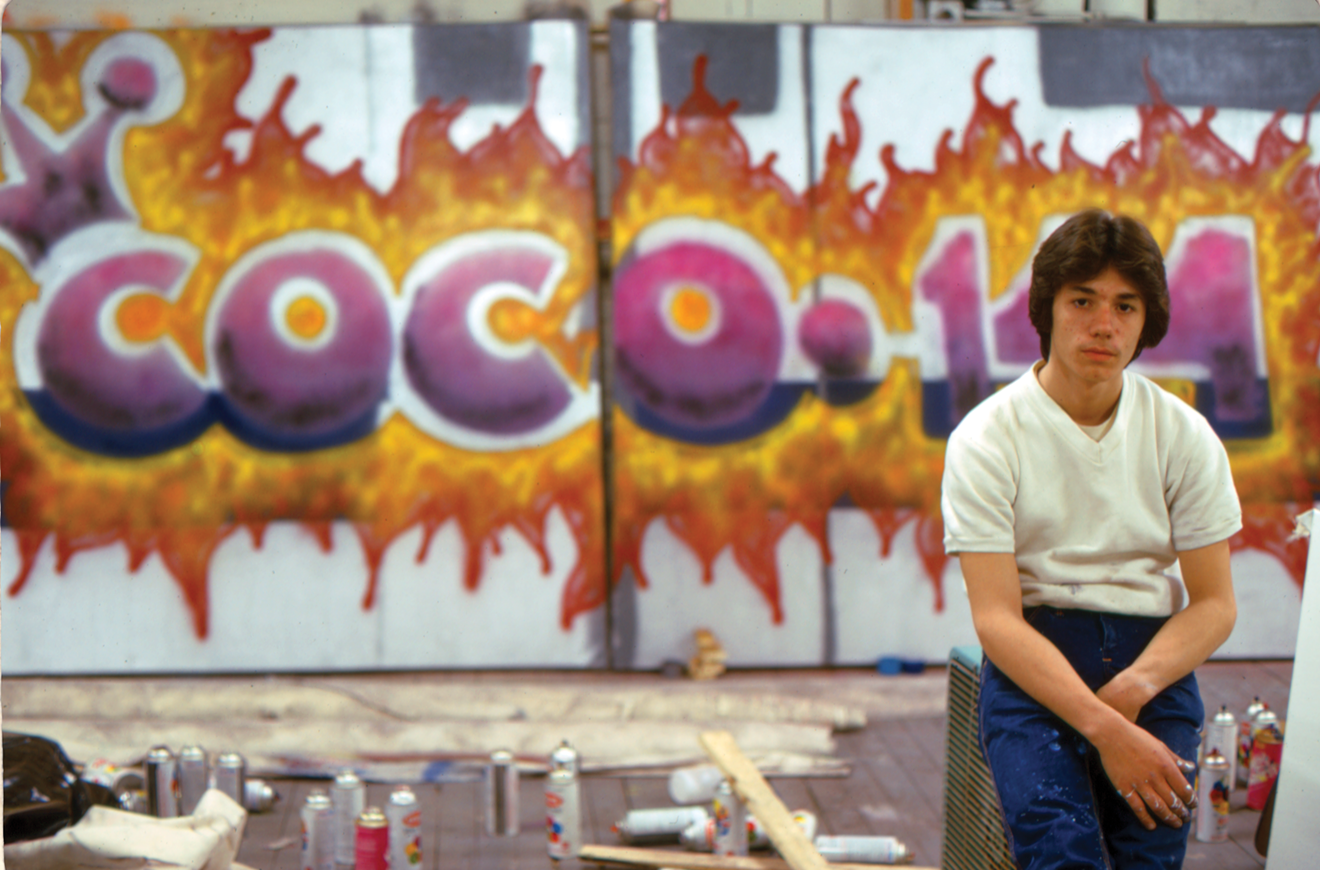 "COCO 144," 1974. Photo by Michael Lawrence, courtesy of Roger Gastman.
Even Roger Gastman agrees: He’s the foremost authority on graffiti in America. But unlike your usual scholar, who stitches together history through books and research, Gastman knows because he’s lived it, beginning in the street and, later, as an urban anthropologist documenting it in print, through photography and on film. The curator of Wall Writers, a new exhibition commissioned by the Museum of Contemporary Art Denver as a companion to two more shows with a stake in graffiti-art history — Basquiat Before Basquiat and Ryan McGinley: The Kids Were Alright — Gastman covers graffiti’s nascent beginnings in the tunnels of New York and Philadelphia in the late ’60s with a visceral re-creation of those times in the MCA’s basement gallery.

In advance of the show’s opening on February 11, we couldn’t resist the opportunity to chat with Gastman about why graffiti matters and prevails. 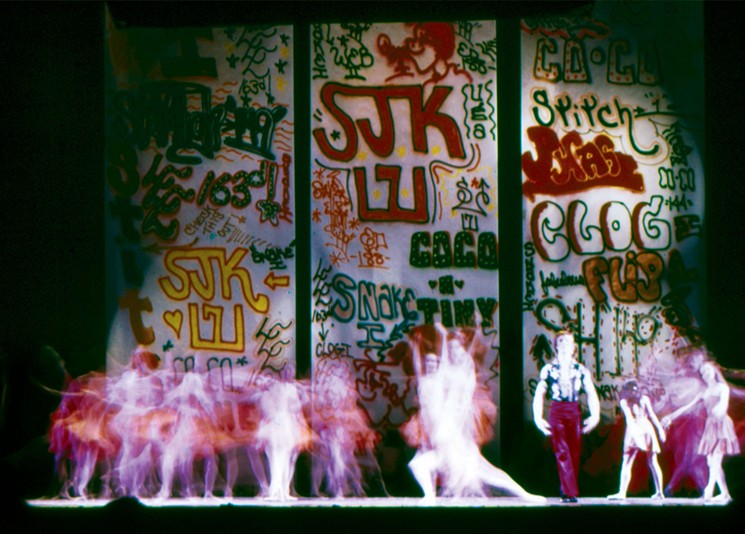 UGA performs during the Deuce Coupe ballet, 1973.
Photo by Herbert Migdoll, courtesy of Roger Gastman.
Westword: What’s your story? How were you introduced to graffiti art?

Roger Gastman: I grew up in Bethesda, Maryland, in the early ’90s. I was into punk rock and hardcore, and so were my friends, and they all had names and were running around doing graffiti, so I thought I might as well be doing it, too. Then I starting traveling and doing it, too. I had friends in bands who would travel places — New Jersey, California. I went with them, and I met people who wrote graffiti in different cities, and we started trading photos. I’d go visit them, and it kept growing. I was always so interested in the history of their cities wherever I went, and they had questions about what was going on in my city. Fast-forward a few years: I started a graffiti magazine, had some art shows, wrote books and started a documentary film project — and here we are today.

Why do you think it stuck with you?

I don't know. That’s the big question, and it always has been. I was just so interested in it that it stuck with me — first as a hobby, then as an obsession and then as a career.

Graffiti art/street art: What are they, and why are they different?

I’m happy to be asked that question, because no one really knows the answer!

They both play on the same playing field, and use a lot of the same tools. The best example is if, say, someone has a two-square-mile radius downtown. For ten years, the graffiti artist does his signature, then does a bubble letter on a bridge and so on, and he has fun doing it. Then someone moves to town and does a stencil image of a dog, and they also have some posters and stickers of the dog, and then they go out and they do it over again three, four, a dozen times. Everyone sees it and says, “Oh, that’s so cute — I’m gonna pose with it, I’m gonna put that on Facebook.” It’s just as illegal as graffiti, but it’s so cute that everyone wants to see a lot more of the street art. Plenty of those artists climbed the rooftops and spent time putting in the energy and the time.

The murals? Those are primarily all done legally by people who are hired to do it. Murals are just another tool in their tool set. I’m not necessarily condemning them, but they’re not true street artists, and they’re not true graffiti artists. 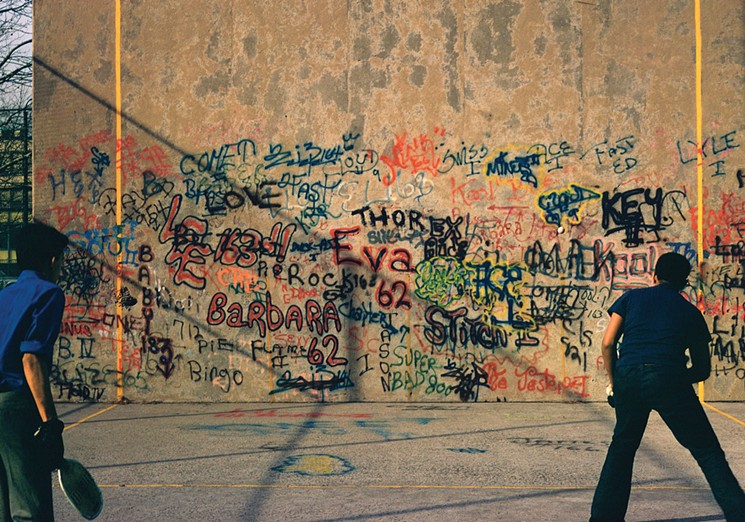 Graffiti art is in. Graffiti art is massive. It’s shown in countless museums. It’s in collections, in fashion, in music, advertising. It’s now a massive culture with its own subculture. And it’s been here for fifty years. Some people love it, some people hate it. We might as well all learn about it.

What about Wall Writers, the complete project?

Wall Writers started seven, eight years ago. I was writing my History of American Graffiti book and talking to people all over the country for that. And so many people I talked to were full of crap: They wanted to place themselves in the scene much earlier than they were actually in it. I know that the age-old argument about where it all started, Philadelphia or New York, has always been controversial, and it always will be.

As I was talking to people about that and the book got closer to a reality, I began finding and talking to some of the true originators. A lot of these guys haven't talked about it in decades, and I didn’t have a huge idea of how to deal with all that information. So we started filming them. We’d talk to one, and they would introduce us to someone else. It turned into a seven-year journey of finding people and telling their stories. Then the film Wall Writers also turned into a book.

Adam Lerner at MCA knew about Wall Writers and approached me about doing a show. I knew where a lot of the bodies were buried — old schoolbooks marked up with ephemeral images and the like, and I went out and found a whole time capsule of the birth of graffiti, fifty years later.

What will people see in the Wall Writers exhibit?

It’s in the basement gallery, and as you walk downstairs and first see it, it’s like walking into a subway station. The walls have been painted by the artist Chris “Freedom” Pape, who’s been doing graffiti since 1974 and is an expert at re-creating the old signatures. There are also original canvases from 1973 on display, along with newspaper clippings, Rolling Stone articles about Taki, high-school notebooks, sketchbooks…. There’s also a big, completely modern-day mural being made in the museum’s entryway by the artist Pose.

The staff at MCA really understood what I was doing. I knew the material well, and they asked a lot of questions. It’s been one of the nicer and easiest institutions I’ve worked with. Plus, it's great how it fits in with other shows. You start at the bottom in the basement and then head upstairs and move into the other eras. It was a smart idea on their part, and the timing is incredible.

Wall Writers: Graffiti in Its Innocence opens Saturday, February 11, and runs through May 7 at MCA Denver. Learn more about the exhibit online. For more information about Roger Gastman and Wall Writers, visit his website.