Here are the ten biggest arts and culture stories of 2021:

Meow Wolf opens
The long-awaited unveiling of Meow Wolf Denver finally came in September, with the arrival of Convergence Station, heralded by glowing rainbow lights and neon-colored signage. Meow Wolf, which got its start in Santa Fe and had already opened a second spot in Las Vegas last February, commissioned more than 100 local artists to create installations in this brand-new behemoth that holds four alien universes, all with a backstory and lore that visitors can explore by grabbing a "QPass" at the front desk. Making a good thing even better: Four nights early in the new year will be adults-only.
click to enlarge Dueling immersive Van Gogh exhibits
There are currently six popular immersive Van Gogh exhibits around the globe, and two of them came to Denver, causing plenty of confusion. The Denver Center for the Performing Arts hosted the international touring exhibit Van Gogh Alive at Stanley Marketplace from April through September, and while influencers were happy to get pictures with projections of the master painter's paintings, hard-core fans of the artist were left unimpressed. Then came Immersive Van Gogh Exhibit Denver, which brought more of the same to even less impressed viewers. And this isn't the end of the immersive craze: A Frida Kahlo immersive exhibit is coming to Denver in February, the Lumonics Gallery of Light and Sound rebooted its Lumonics Immersed performances, and music collective Coastless Creatives started hosting immersive arts and music concerts this year. And then there's Meow Wolf....
click to enlarge

The 1966 model for the new Denver Art Museum.
DAM

The DAM gets a makeover
The Denver Art Museum completed its long-anticipated facelift this year, reopening the castle-like wing designed by Gio Ponti as the Martin Building, with new layouts for some of the museum's best permanent collections. Before COVID, the goal was to reopen in stages starting in May 2020, but the museum pushed that back to October 2021, when it unveiled the entire $150 million project, including the new Sie Welcome Center. The consensus: It's a masterpiece.
click to enlarge 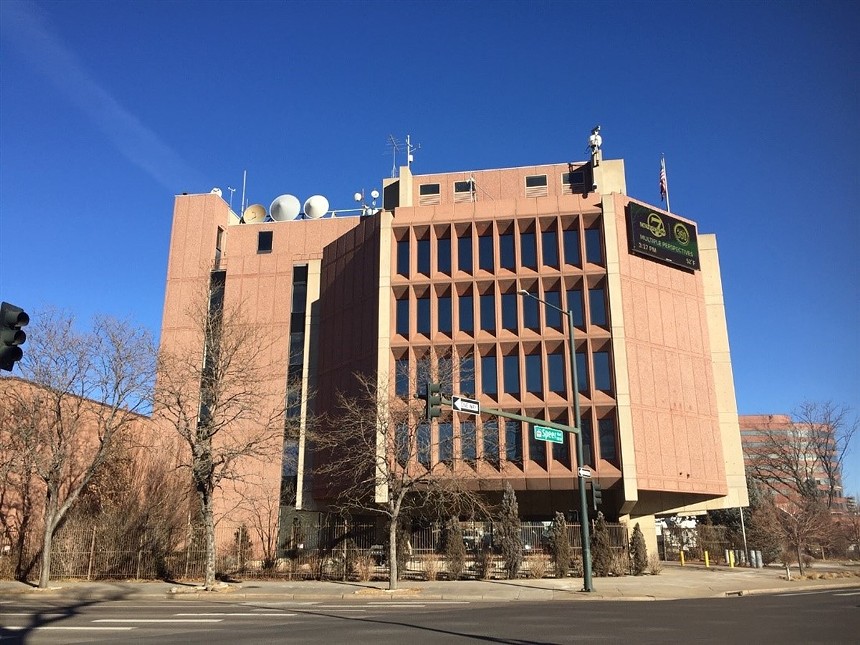 Does this building look historic to you?
denvergov.org

Goodbye, Channel 7 building
While the brutalist Ponti-designed wing of the Denver Art Museum was given a second chance, the KMGH Channel 7 building on Speer and Lincoln street met a more brutal fate. In May, Denver City Council gave a resounding, unanimous "no" to civic efforts to preserve the "historic" circa 1969 structure that was acquired by New York-based developers Property Markets Group and Toronto-based Greybrook Realty Partners. The building will be turned into a twelve-story apartment complex called Society Denver. And another one bites the dust. 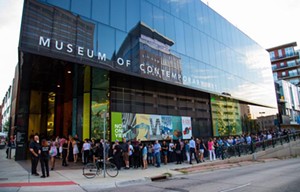 The Museum of Contemporary Art celebrates 25 years
Since its early days in borrowed space, MCA Denver has presented some of the city's most provocative and relevant exhibits, and that alone was reason to celebrate its 25th birthday in October with a big, if masked, bash. As for the future? "Our next chapter will be about embodying a model that is more decentralized, more expanded in the community. [We're] growing how we build connections across the city, forge partnerships across the city and region, identifying new ways to share our platform, and highlighting the creativity that happens here," Courtney Law, MCA director of communications, told Westword.
click to enlarge RiNo Art District launches a new mural program
After Crush Walls was crushed by sexual-misconduct allegations involving its founder, RiNo Art District boardmembers stepped in to replace it with the nonprofit Keep RiNo Wild. The new, year-round mural program is being organized by local street artist Alexandrea Pangburn, who founded the nonbinary and women mural festival Babe Walls in 2020. The district again recruited local businesses to offer up their walls, pledged to pay the artists more and worked to include more diverse and local artists. “The best things I can do to support a greater number of artists financially, which is the most amazing part to me, are pulling this funding together to get them paid more than they would get paid in a festival and highlight their work,” Pangburn told Westword in March.
click to enlarge Beacon and River open in RiNo
While more corporate ventures are moving into the River North neighborhood, it did get two artsier venues this year. River opened in the former home of the down-and-dirty Welcome Inn, filling the space with murals by local artists and cheap drinks. Then came Beacon, a Meow Wolf-inspired venue whose name represents the light at the end of the pandemic. Its grand opening in mid-December included several psychedelic installations by local artists, as well as craft cocktails and homemade hard seltzers. The venue boasts projection mapping done by Jon Medina, who has worked with Meow Wolf, and multiple rooms decorated with different themes by local artists. As the pandemic continues to put a damper on entertainment opportunities, Beacon is a bright spot.
click to enlarge 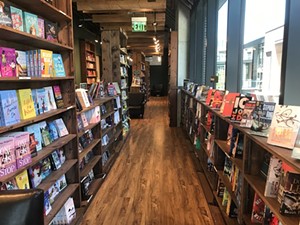 
The Tattered Cover moves to McGregor Square
The Tattered Cover has gone through a lot during the pandemic, including a sale to a team of local investors headed by CEO Kwame Spearman, who grew up in Denver. After a rough start for the new owners, the Tattered Cover has really turned the page, with a move from its 16th Street Mall location to McGregor Square this spring and revived programs at its other outposts. Under Spearman, the company has doubled down on a commitment to hire more diverse employees and launched its Hue-Man Experience collection of books by Black authors that's curated by Clara Villarosa, who ran the legendary store of that name in Denver in the 1980s and ’90s. 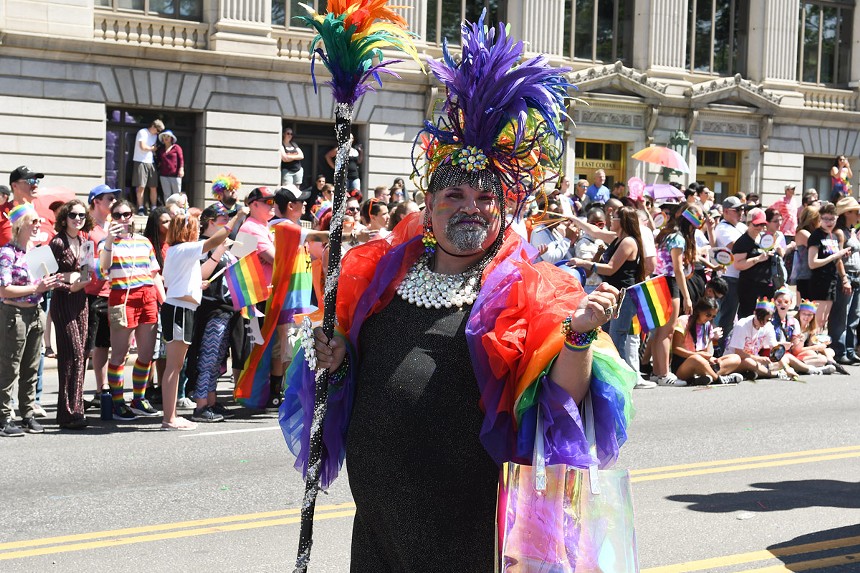 Denver's Pride parade was virtual this year.
Miles Chrisinger
Denver Pride returns
After the annual PrideFest went mostly online during 2020, Denver's LGBTQ+ community and its allies went all out in 2021 to celebrate their identities. Even though the parade that usually rallies at Civic Center was still virtual, it could be streamed from multiple locations, including parties at bars, and many in-person events were dispersed throughout the city for rainbow-filled revelry. The Denver Pride 5K filled the streets with skippers, runners and joggers raising money for the Center on Colfax, and the Denver Museum of Nature & Science hosted family-friendly Pride activities.
click to enlarge 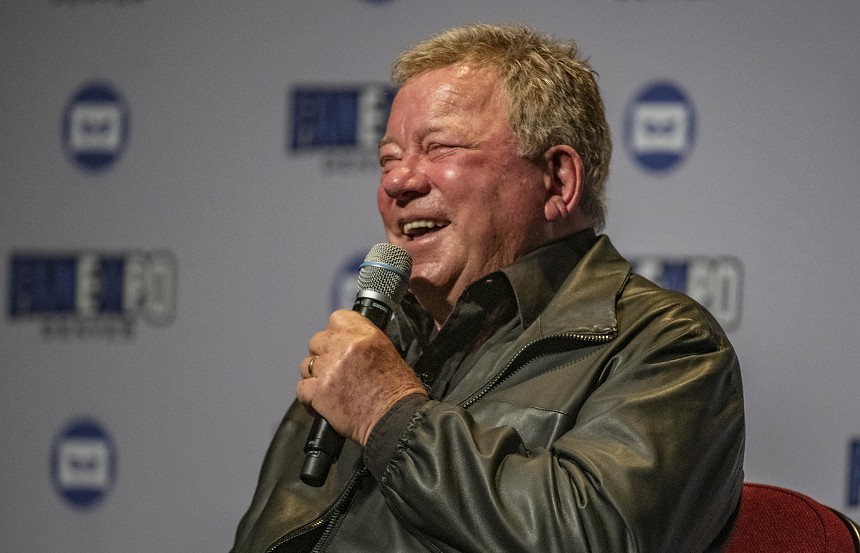 "I'd never say I was an astronaut. Maybe a half-asstronaut," Shatner offered.
Evan Semón

FAN EXPO brings the pros
The evolution of what started as Denver Comic Con and then morphed into Denver Pop Culture Con continued when the first Denver FAN EXPO moved into the Colorado Convention Center in October, bringing a star-studded lineup of celebrity guests that included William Shatner (fresh from space, which inspired this line: "I'd never say I was an astronaut. Maybe a half-asstronaut"), Giancarlo Esposito (The Mandalorian and Breaking Bad), Ray Fisher (Justice League) and more. Vendors filled more than 400,000 square feet with comic-book, gamer and pop-culture wares, all snapped up by the costumed hordes. An even bigger FAN EXPO is slated to hit town next summer.
KEEP WESTWORD FREE... Since we started Westword, it has been defined as the free, independent voice of Denver, and we'd like to keep it that way. With local media under siege, it's more important than ever for us to rally support behind funding our local journalism. You can help by participating in our "I Support" program, allowing us to keep offering readers access to our incisive coverage of local news, food and culture with no paywalls.
Make a one-time donation today for as little as $1.
Emily Ferguson is Westword's Culture Editor, covering Denver's flourishing arts and music scene. Before landing this position, she worked as an editor at local and national political publications and held some odd jobs suited to her odd personality, including selling grilled cheese sandwiches at music festivals and performing with fire. Emily also writes on the arts for the Wall Street Journal and is an oil painter in her free time.
Contact: Emily Ferguson