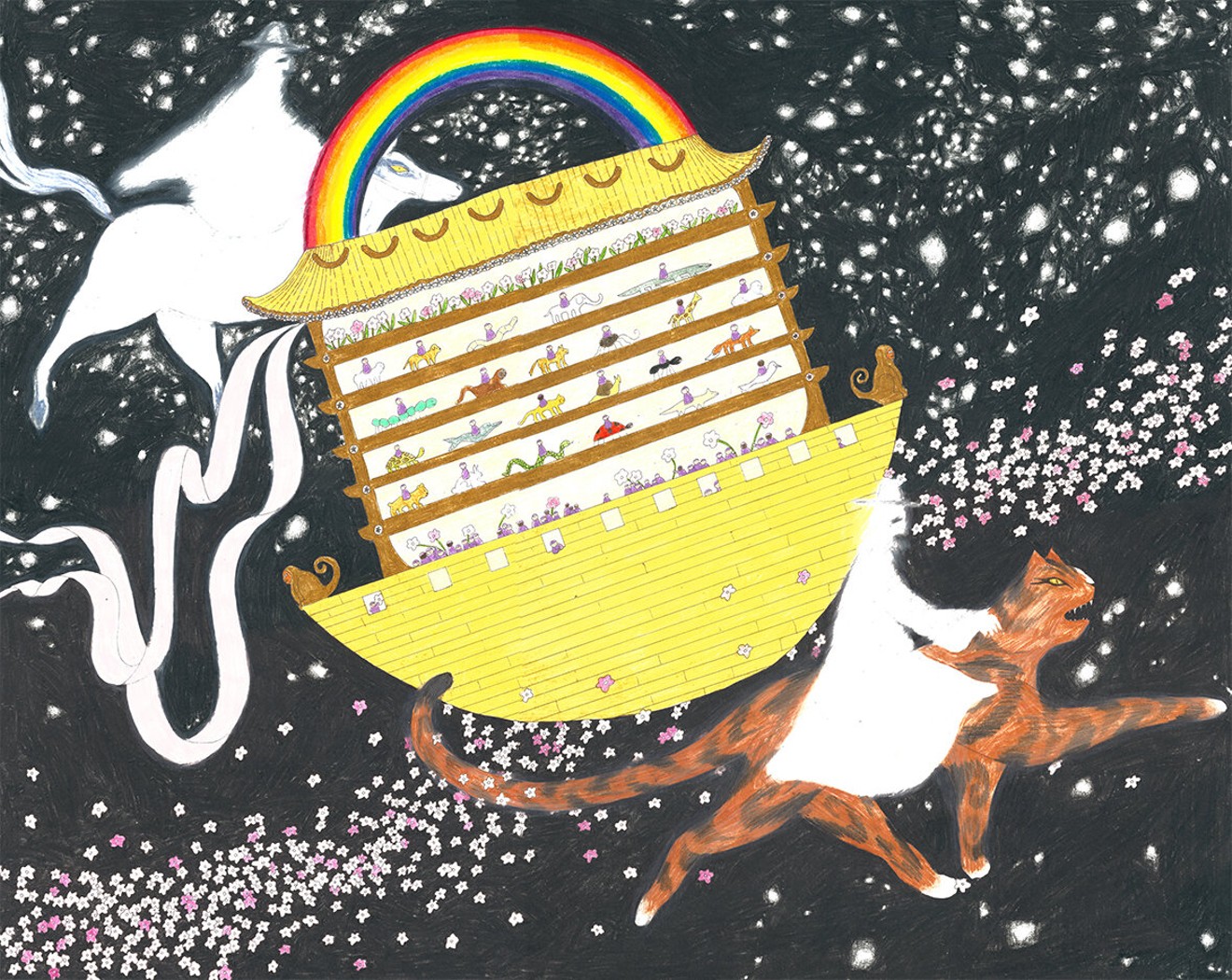 Cory Feder, “Kokdu River,” colored pencil on illustration board, for the Americas COVID-19 Memorial Exhibition. Courtesy of Biennial of the Americas
It’s a wild and larger-than-life First Friday weekend: Mark Sink pulls out mementos from his life in the Warhol ether of New York in the ’80s at Dateline; Donald Fodness toys with the grotesque in assemblages of boob mugs and madonna statuaries at the Evans School; No Vacancy hosts a wild night of performance and immersion by this month’s resident artists; and Matthew Harris goes berserk at Leon.

But you’ll find a more thoughtful trend, as well as big art fairs and fests. Plan your own art attack working off the information below: 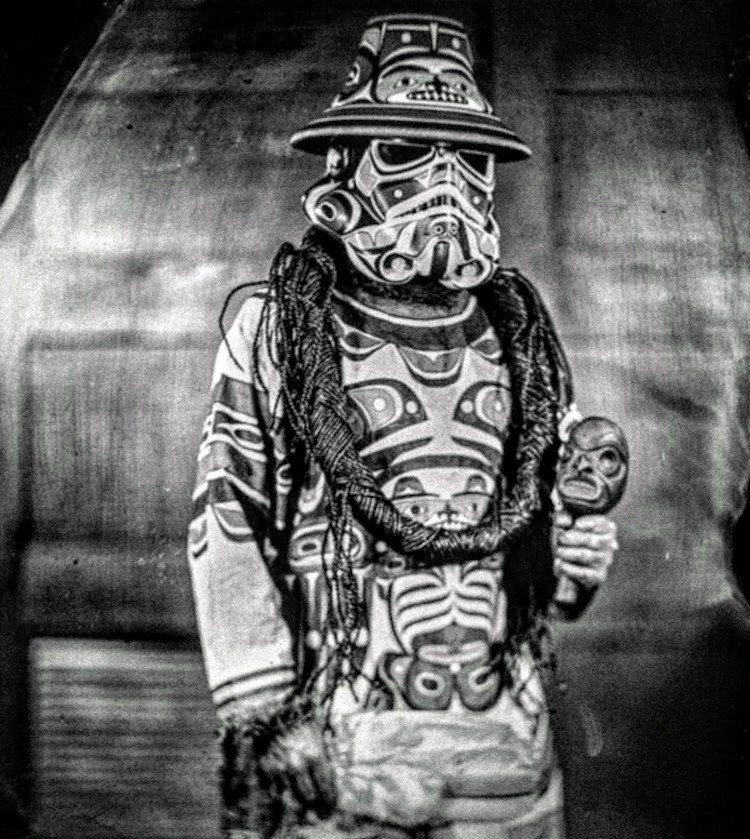 Will Wilson, “K’omoks Imperial Stormtrooper (Andy Everson),” 2021, citizen of the K'omoks First Nation.
© Will Wilson
Will Wilson, The Critical Indigenous Photographic Exchange (CIPX)
The East Window, 4949 Broadway, Unit 102-B, Boulder
Through October 29, 10 a.m. to 10 p.m. daily
Diné photographer Will Wilson’s ongoing series, The Critical Indigenous Photographic Exchange (CIPX), challenges Edward S. Curtis’s famous photos of American Indigenous people, which he labels stereotypical rather than iconic, by making his own nineteenth-century-style wet-plate collodion images of modern Native citizens just as they are, minus the over-romanticized Caucasian view Curtis took. A sampling of Wilson’s work will reside in the East Window in Boulder through the end of October. 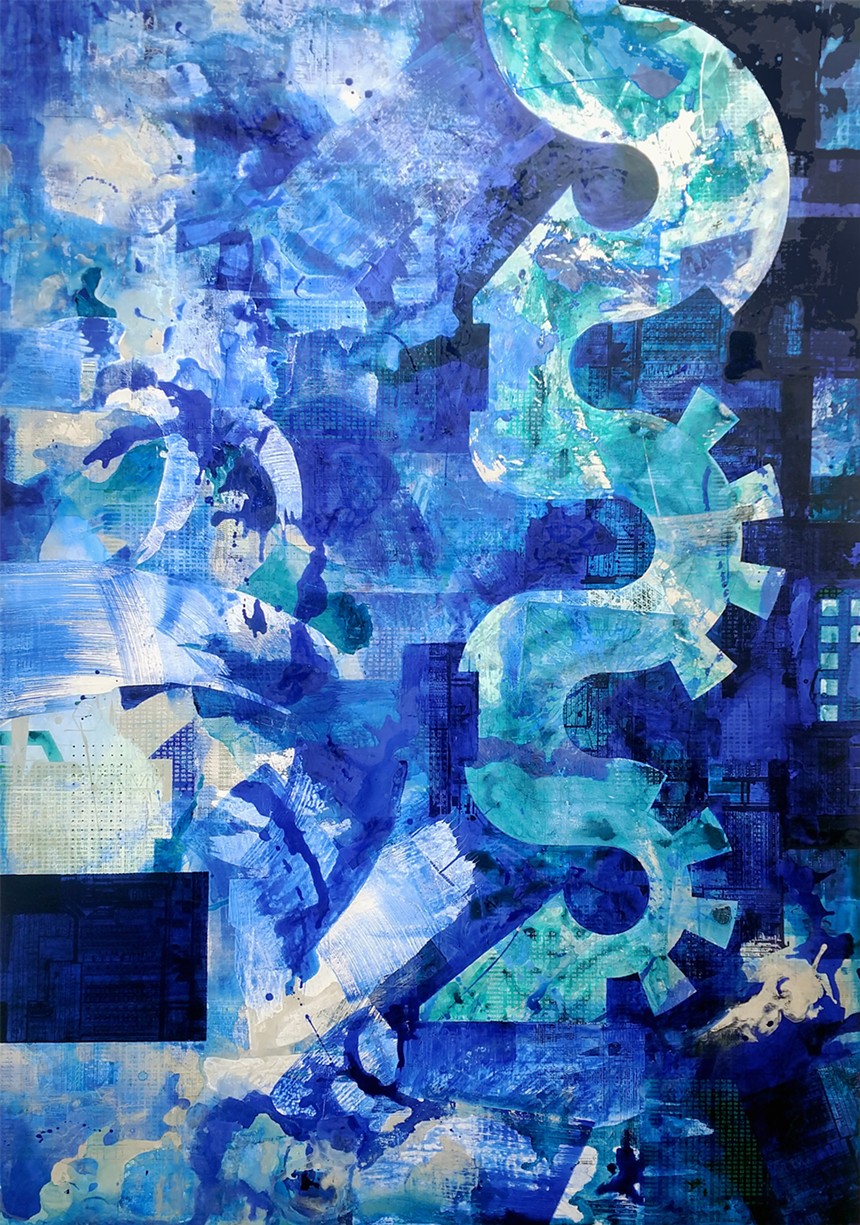 Suchitra Mattai, “The Center of Gravity,” gouache and acrylic on paper.
Courtesy of the Biennial of the Americas
Americas COVID-19 Memorial Exhibition
Museo de las Americas, 861 Santa Fe Drive
September 3 through September 25
First Friday Art Walk/Opening: Friday, September 3, noon to 9 p.m.
ConnectArte: Curator and Artist Talk: Thursday, September 16, 6 to 7:30 p.m.
After a hemisphere-wide search for artists by the Biennial of the Americas, the Americas COVID-19 Memorial Exhibition, a sad reminder of how COVID-19 has affected life in the Americas, is finally ready to be seen by the public. The 21 commissioned artists selected by curatorial advisors María Paz and Derrick Velasquez approach the imperative in a multitude of statements and styles, creating a patchwork heavy with personal perspectives. Admission to the Museo is free all day for the opening; commissioned artists Suchitra Mattai and Ana María Hernando and curator Derrick Velasquez will later join Museo director Claudia Moran for an in-depth talk on September 16.
click to enlarge 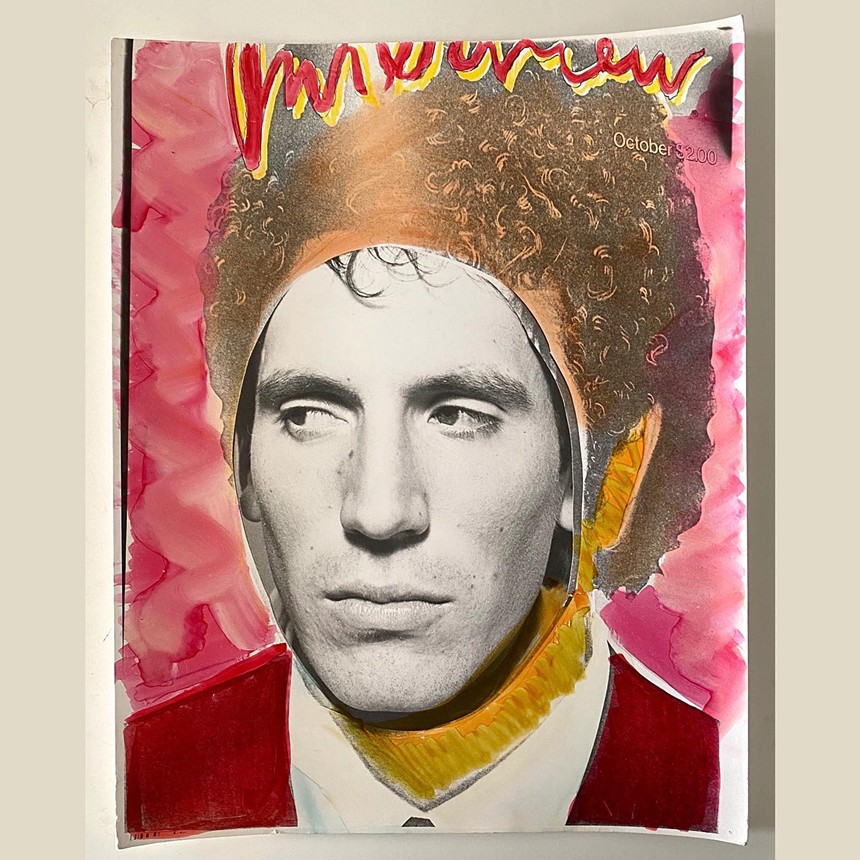 “Self Portrait: Mark Sink as Michael Jackson,” 1982.
Mark Sink
Show & Tell: Downtown NY 1980s Art, Ephemera and Personal Stories From the Collection of Mark Sink
Dateline Gallery, 3004 Larimer Street
September 3 through September 11
Opening Reception: Friday, September 3, 6 to 11 p.m.
Additional Hours: Saturday, September 4 and September 11, noon to 5 p.m., or by appointment
Denver photographer and arts booster Mark Sink famously hung with Andy Warhol and the rest of New York City’s art underground as a young man back in the ’80s in an influential adventure of a lifetime, but the stuff he’s carried with him since then needed serious organizing. Sink’s trove of memorabilia collected from that era will come out of hiding and pop up this weekend at Dateline Gallery for a short run, telling its stories in the form of snapshots, ephemera and artworks curated by Dateline’s Jeromie Dorrance. Find the impressive list of personalities whose faces or works turn up in this windfall of an exhibition on Instagram, and run, don’t walk, down to Larimer Street. If you love pop culture, this is a show you’ll want to see.
click to enlarge 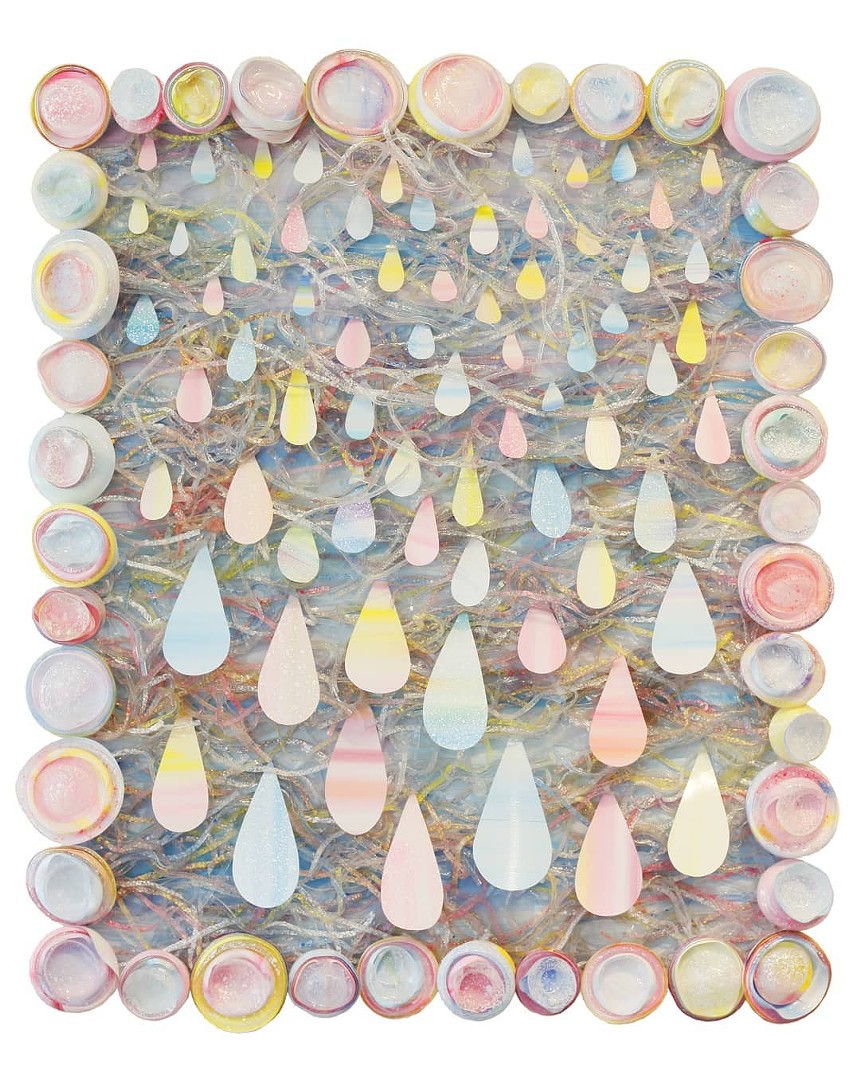 Brent Hayden, "Goddamn I Miss the Rain,” 2021, polystyrene, acrylic.
Brent Hayden
3ism
Evans School, 1115 Acoma Street, Room 111
Opening Reception: Friday, September 3, 6 to 9 p.m.
Alto Gallery will be moving into the soon-to-debut RiNo ArtPark this month. In the meantime, while getting that space together, Alto is hosting 3ism, a pop-up at the Evans School near the Denver Art Museum. Curated by Denver artist Peter Yumi, the exhibition showcases Donald Fodness, Brent Hayden and Zach Searcy, a trio of artists working in Colorado and beyond. 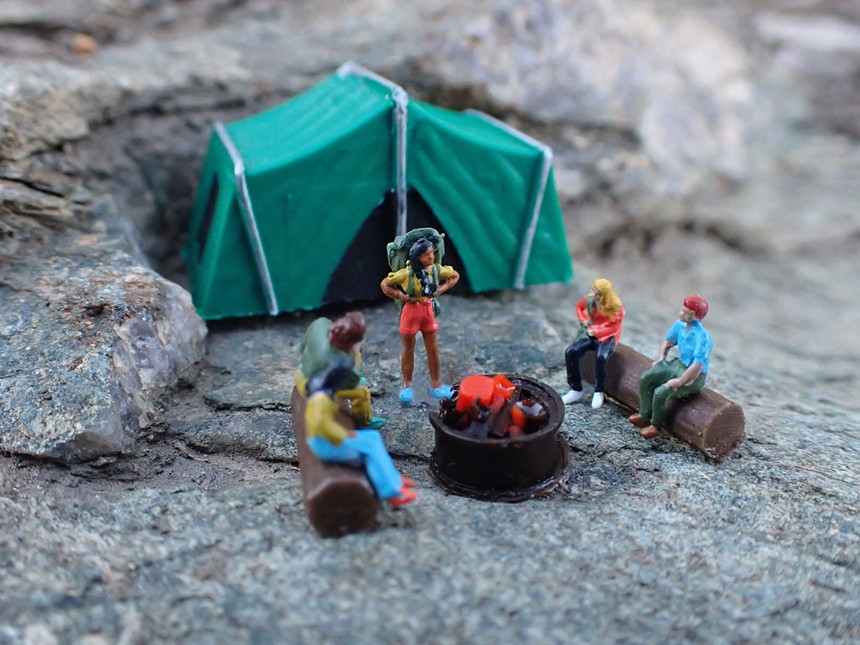 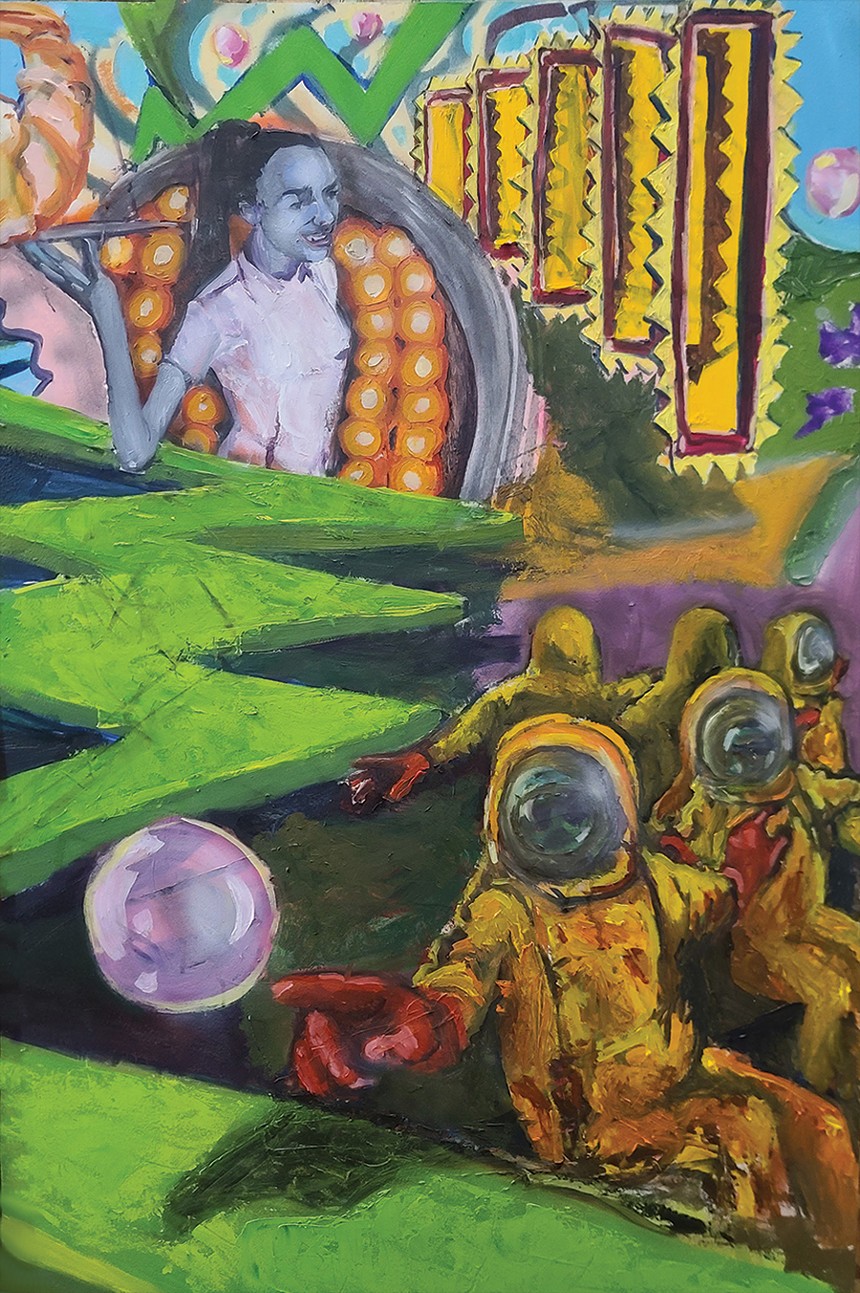 New Mexican artist Isaac Sandoval debuts at Foolproof.
Isaac Sandoval
Isaac Sandoval, The Other Side of Normal
Foolproof Contemporary, 3240 Larimer Street
September 3 through October 31
Artist Receptions: Friday, September 3, and Friday, October 1, 7 to 10 p.m. both nights
Isaac Sandoval is a restaurateur and chef in Las Vegas, New Mexico, where he and his wife, Shawna, run a pan-cuisine eatery, The Skillet, that serves a menu where dishes like New Mexican chow, ramen and Chinese orange-chicken burritos live together in peace. He’s also a painter, sculptor and muralist (his handiwork can be seen on the restaurant’s walls) who is debuting at Foolproof this week with a solo show. His style falls somewhere between Mexican folk art and Big Daddy Roth, and you don’t see that much in these parts. Look out for food metaphors.

First Friday September
No Vacancy, 3722 Chestnut Place
Friday, September 3, 7 to 10 p.m.
No Vacancy’s latest featured First Friday artist resident showcase casts light on a wild and eclectic bunch for something a little bit psychedelic rave-y, a little bit Mad magazine, with a pinch of Garbage Pail Kids and an essence of sideshow — and immersive as all get out. Artist Mar Williams and friends take a jab at the notion of art world money-grabbers with the installation Exit Through the Butthole, which does have something to do with traveling through a giant cat (look here for more info), while the comedy performance troupe Oddknock Productions goes a different direction with a two-night fake QVC hit called Simply Purely. Further offerings from Kyle Singer’s Waffle Cone Club, Bzurk and Ell Peterson fill out the evening. 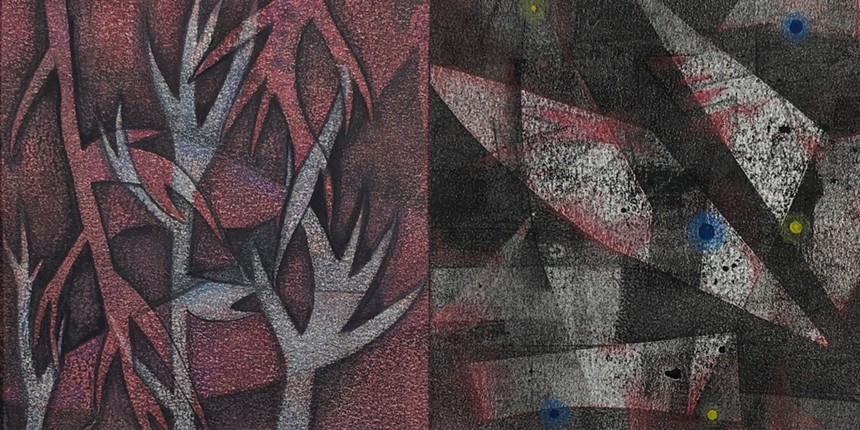 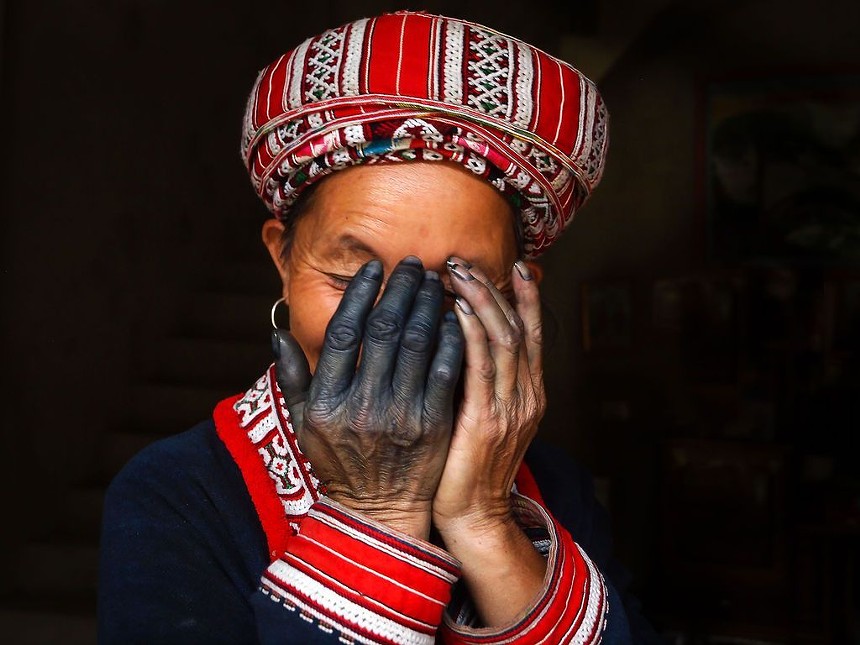 Pastelist Deana Goldsmith is one of more than 200 artists at the Cherry Creek Arts Festival.
Deana Goldsmith
Cherry Creek Arts Festival
Creekside, Cherry Creek Shopping Center, 3000 East First Avenue
Saturday, September 4, and Sunday, September 5, 10 a.m. to 8 p.m. daily
Monday, September 6, 10 a.m. to 6 p.m.
The Cherry Creek Arts Festival is back after a cancellation in 2020 and a postponement to September in 2021, but festival-goers can expect the same kind of juried, high-quality art vendors as always, along with the programming that makes CCAF shine — with a few changes. First, the fest is moving across First Avenue to Creekside, behind the Cherry Creek Shopping Center, for a new look and feel, and for the first time, it's using a timed-entry system requiring pre-registration online. Not only that, but the art fest will be cohabiting with the Denver Chalk Art Festival, where 100 chalk virtuosos will be creating art on Saturday and Sunday in the shopping center’s northwest parking lot. Otherwise, it's business as usual: The Creation Station will be offering hands-on art experiences, and the food court and live music will be back. Admission is still free; RSVP and find info at Eventbrite. 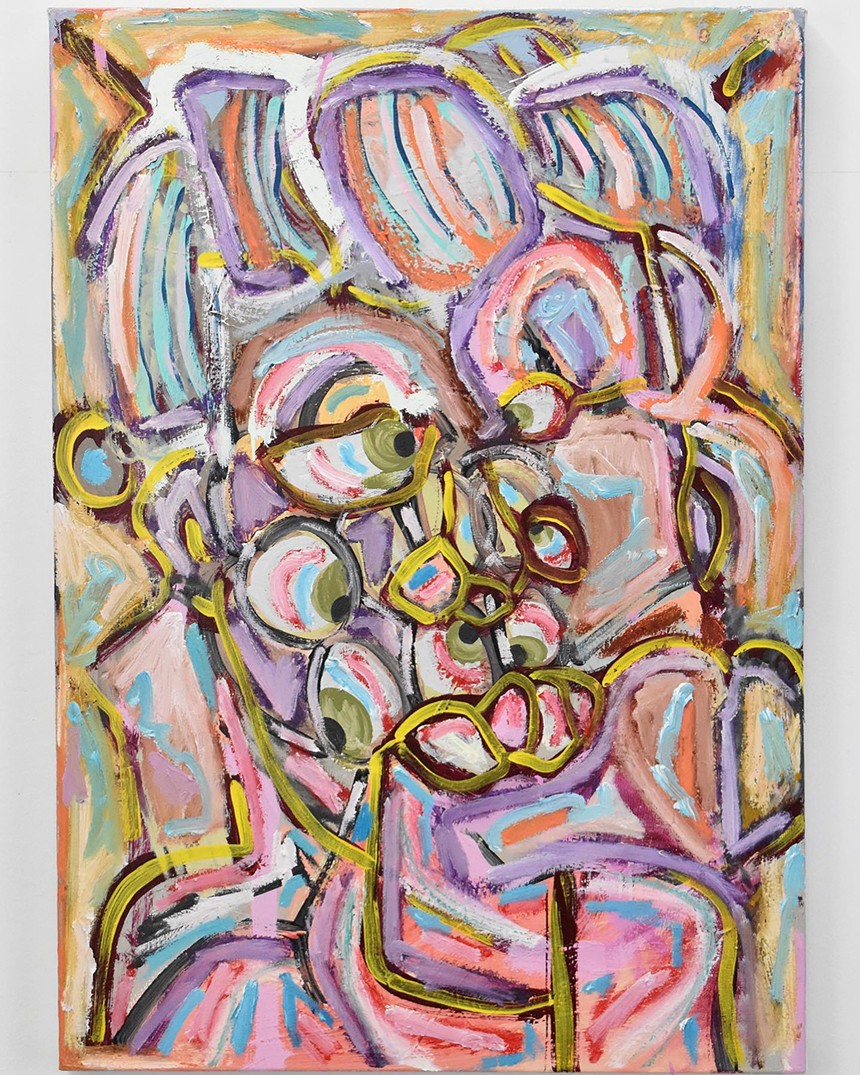 Matthew Harris, "Again," acrylic and oil on canvas.
Matthew Harris
Matthew Harris, Watermelon Snowfall
Leon Gallery, 1112 East 17th Avenue
September 4 through October 16
Opening Reception: Saturday, September 4, 7 to 11 p.m.
Matthew Harris, an artist with a free hand and spirit, returns to Leon for a second solo show of flamboyant and chaotic paintings and sculptures that speak for themselves, at least as far as Harris, who sees the world through Ken Russell glasses, is concerned. Not to miss!

Street Wise Mural Festival
Sunday, September 5 through September 12
Various Boulder locations
Official Street Wise Launch Party: Sunday, September 5, 1 to 4 p.m.
Rayback Collective, 2775 Valmont Road, Boulder
Boulder’s Street Wise, now in its third year and shaping up to be one of the region’s best-run mural festivals, kicks off over Labor Day weekend, beginning with an informal Sunday afternoon meet-the-artists launch party at Rayback. The next day, up to thirty participating artists will start painting, following Street Wise’s general theme of “artivism"; the action continues through September 12. Along the way, Street Wise has plenty of programming, from panel discussions to art shows, to keep its audience busy as the murals near completion. Most events are free; RSVP here, and learn more here.