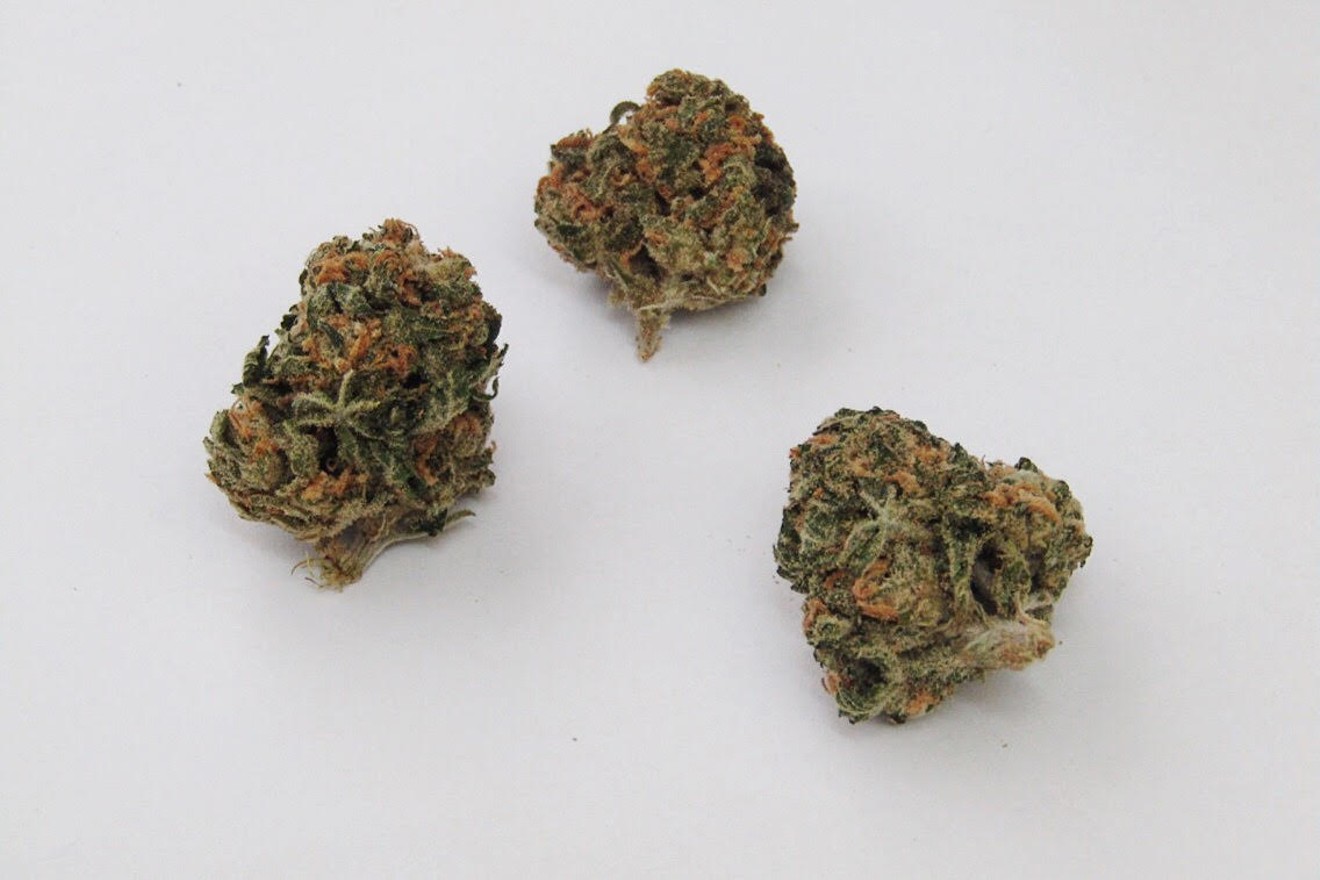 We like to shoot from the hip with this strain. Herbert Fuego
Forgive me, fellow tokers, for thus far failing to review one of the cannabis world’s most lethal strains. Maybe I figured we’d already had it covered, maybe I was just too scared to actually check on that. But when AK-47 caught me in the crosshairs during an unplanned dispensary visit, I had no choice but to take the bullet.

Named after one of the most widely used killing machines on the planet, this strain is much more gentle than you’d imagine. The sativa-dominant hybrid came to fame in the early ’90s, winning cannabis cups and taking over the streets thanks to a potency that crossed the 15 percent THC mark, which was really powerful at the time.

Time hasn’t passed AK-47 by — these days, it easily reaches 20 percent THC — but it’s more likely to win a lifetime-achievement award than Strain of the Year going forward. Still, I didn’t expect it to be so subtle on my psyche while simultaneously amping up my energy, and the high’s lulling comedown is worth remembering.
If your past AK experiences were all with weed dealers, it’s worth trying what the dispensaries are pushing.

I’ve seen the strain at Altitude, bgood, Damian Marley’s Stony Hill, Denver Dispensary, Diego Pellicer, Herbs4You, Lightshade, the Lodge and Solace Meds, and no doubt it’s at many more. Your choice of cut is likely to be based on price, but my favorites come from Denver Dispensary, Diego Pellicer and Herbs4You, with the latter carrying the most value at $25 per eighth.

Looks: AK-47’s fist- and banana-shaped buds typically don’t carry the heavy trichome coating that newer strains sport, but don’t let that fool you into thinking it’s less potent. The strain’s lime-green color and creamy-orange pistils carry a classic chronic look, with rare shades of purple depending on the phenotype.

Smell: A rustic reprieve from pinching tangerine or sugar-cake aromas, AK-47 gives off pungent but enjoyable notes of wet soil, zesty hints of pine and wood, and a subtle orange aroma at the end. The dank mixture is both skunky and spicy, with a small, sweet layer of citrus on top.

Flavor: The strain’s flavors should be simple and easy to notice but still varied, starting with sweet, earthy Kush notes, dominated in the middle by sweet tastes of rubber, and finished off with grainy hints of wood.

Effects: Although named after a powerful rifle, AK-47 doesn’t put a hole in your head. Its alert, euphoric effects are perfect for daytime chores and social activities, while its focus and slight body high keep the anxiety at bay. Still, a couple puffs too many will eventually bring a strong comedown. It’s been used to treat anxiety, exhaustion, stress, eating disorders and mental anguish.

Commercial grower’s take: “I’ve always been interested in AK-47 because everyone talked about it and heard about it before dispensaries popped up, but they don’t really know much about its qualities. What are its effects? What does it smell like? That stuff. You need to pull those earthy, skunky flavors from it, with that nutty/woody aftertaste. You just need to watch the dampness and mold. Keep the humidity down but keep the temperature cooler than average — that’s the challenge.”

Home grower’s take: “Used to be a lot easier to find as seeds and clones in medical dispensaries, but it’s still on the [black market] if you have enough friends. It doesn’t produce enough for me, but I’ve had friends who’ve pulled AK-47 down inside of seven weeks and it looked fine. I think it’s pretty underrated in terms of breeding, because its sativa high is almost calming on the mind at the same time, which is tough to pull off. I think that’d be a good base for some hybrids, like a lot of Diesels out there.”