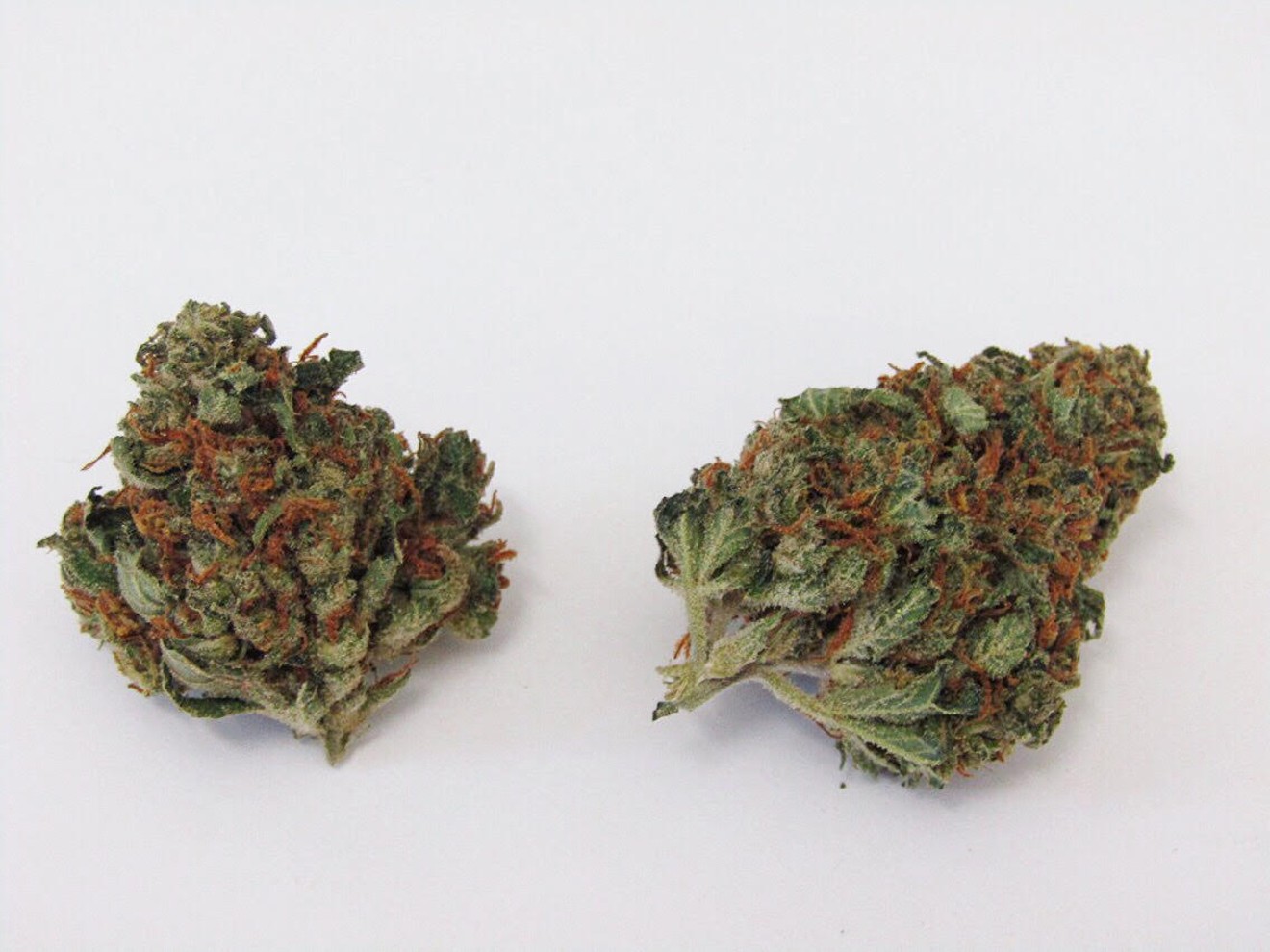 Blue Dragon is a fire strain with a cold backhand. Herbert Fuego
Combatting the stoner stereotype is the rage these days, and I'm all for it. Having moms and working professionals come out of the closet, hitting vape pens and microdosing edibles to kick ass and relax without the Cheetos, is great for diversifying the consumer image. But sometimes I just want to get giggly-baked, eat chicken nuggets and laugh at poop jokes, and I'm not afraid to admit it.

I've found that potent hybrids create the best shit-eating grins and munchies without causing anxiety, and Blue Dragon is a definite contender. The hybrid’s illustrious lineage will make most tokers wonder why the melding didn’t happen sooner: It was bred with Blueberry and Sour Diesel, resulting in a funky, tart blend of rubbery sweetness that's sure to pucker mouths and glaze eyelids a few times over. Blueberry is a sweet, doughy indica with a syrupy overtone, while Sour Diesel's gassy, skunky notes have been leaking out of pockets and exposing amateur stoners for decades. The clash of these two distinct flavors makes it harder to recognize all of Blue Dragon’s subtle intricacies, as its powerful parents don't mix as well as other hybrids with classic genetics — like, say, Girl Scout Cookies. Still, anyone who likes doughy, tart strains would appreciate Blue Dragon's sweet sourdough taste: You’ll get some berry aspects, but none of those heavy, syrupy characteristics that Blueberry's known for.

But while Blue Dragon's genetic clash makes for a tasty smoke, I'm not quite sold on the high. Some hybrids have a balance of indica and sativa effects throughout, while others start with a sativa rush and end with an indica comedown. Count Blue Dragon among the latter, but that indica comedown is more like a cliff. The initial euphoria met my standards for a relaxed, giggly high, upping my visceral intake while my body pulsated with waves of relaxation. Those warm waves soon became exhausting, however; my concentration waned, and after 45 minutes I couldn't stop yawning — which is quick for someone with my tolerance.

Blue Dragon is currently available at DANK dispensary, as well as at several other pot shops around town as a concentrate from Harmony Extracts. Purple Dragon, which pairs Blue Dragon with Purple Erkle for a more indica-heavy version of the strain, is also sold around Colorado.

Looks: Blue Dragon has round, fluffy buds that range from circular to cone-shaped. Its forest-green color can have occasional shades of blue or violet, with a sparkling coat of trichomes that contrasts well against the dark calyxes.

Smell: Sweet biscuit notes and intense sour ones create a sourdough aroma with a gassy after-scent. Although subtle, smells of berries and orange slowly swell up in the pits of your nostrils when the buds are pinched.

Flavor: Blue Dragon is a little spicy and floral up front, but a strong Diesel aftertaste can cloak the sides of your tongue for over an hour after smoking. Blueberry's doughy flavors shine through more than its berry sweetness, but a joint will showcase both well enough.

Effects: While the strain's initial uplifting effects might fool users into continually smoking it or expecting an all-day rush, that spike will turn into a calm state of stupidity very quickly. The bubbly euphoria, while short-lived, makes this a great nighttime strain if you're prepared to fall asleep soon.

Home grower's take: “I first started noticing this around ten years ago, maybe less, and I'll swoop up some clones from time to time. I've heard of cuts with Blue Rhino genetics and others with Blue Dream, but I'm pretty sure those are bullshit, at least out here. I flower mine for nine weeks but have thought about going ten and flushing for that last one, because I've never been huge on its flavor. The color is magnificent, though: beautifully dark, with those purple-blue colors spotted here and there. The trichomes almost make it look wet in certain shades of light.”