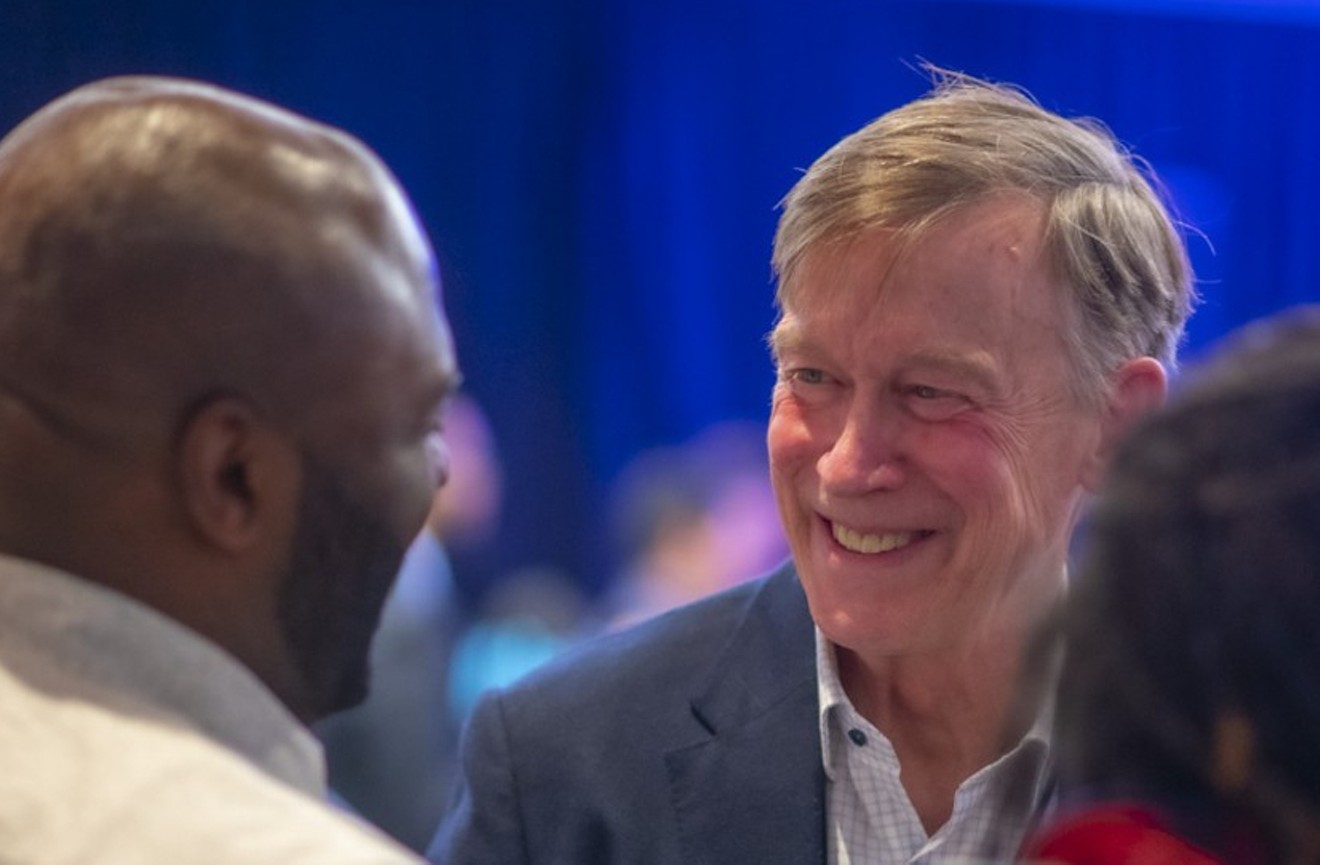 Former Colorado Governor John Hickenlooper, now a U.S. Senator, believes the federal government should be ahead of marijuana legalization. Evan Semon
As the first United States governor to oversee the statewide legalization of recreational marijuana, John Hickenlooper knows how hard it is to work against decades of prohibition.

Ten years after Colorado voters legalized the plant and nearly three years after his term as Colorado governor ended, Hickenlooper, now a U.S. senator, believes that federal legalization is an oncoming train, and he wants to lay down the tracks earlier than he did in Colorado. One step: sponsoring the Preparing Regulators Effectively for a Post-Prohibition Adult Use Regulated Environment (PREPARE) Act, which would direct the U.S. Attorney General to develop a regulatory framework for marijuana laws once the plant is legalized and create a federal commission for regulations.

If the bill passes, the Commission on the Federal Regulation of Cannabis would work on proposals regarding potential commercial regulations, scientific research, public safety laws and more, while also respecting the "unique needs, rights and laws of each state," according to Hickenlooper's office. The new regulatory framework would also include "ways to remedy the disproportionate impact cannabis prohibition has had on minority, low-income, and veteran communities," as well as more protections for the industrial hemp industry.

Although the commission, a 24-person panel comprising government officials and individuals nominated by congressional leadership, wouldn't have rulemaking authority, it would help establish a regulatory framework similar to the way the nation governs alcohol, which involves a mix of federal regulations and state laws.

The commission's makeup would be similar to those in states that have implemented their own marijuana legalization initiatives, including Colorado, where cross-government regulation requiring state health, law enforcement and licensing departments to collaborate has been promoted by elected officials.

“A decade after Colorado pioneered marijuana legalization, Americans overwhelmingly support the same at the federal level,” Hickenlooper said in an announcement of the bill's introduction in the Senate. “This bipartisan, bicameral framework, based on Colorado’s Amendment 64 Task Force, will replicate our success nationally.”

Hickenlooper wasn't always a fan of marijuana legalization. When Colorado voters approved Amendment 64, legalizing recreational pot in 2012, he worried that marijuana use among children would increase as a result, and warned people to not "break out the Cheetos or goldfish too quickly.” He's since reversed position, however, and now supports legalization at the federal level.

"This was such a better societal decision than the world I grew up in," Hickenlooper told a Denver crowd in October, adding that the country is "at a point now where I think it's time for the federal government to step up to the big-boy table and get this done."

The PREPARE Act was introduced in the U.S. House of Representatives by Republican congressman Dave Joyce of Ohio. Hickenlooper, a Democrat, is serving as the main sponsor of the Senate version.

"I was proud to lead the introduction of this commonsense bill in the House, and thank Senator Hickenlooper for advancing it in the Senate," Joyce says in a statement. "I look forward to continuing to work with him and my fellow Cannabis Caucus co-chairs in the House to pave the way for more comprehensive reform."
KEEP WESTWORD FREE... Since we started Westword, it has been defined as the free, independent voice of Denver, and we'd like to keep it that way. With local media under siege, it's more important than ever for us to rally support behind funding our local journalism. You can help by participating in our "I Support" program, allowing us to keep offering readers access to our incisive coverage of local news, food and culture with no paywalls.
Make a one-time donation today for as little as $1.