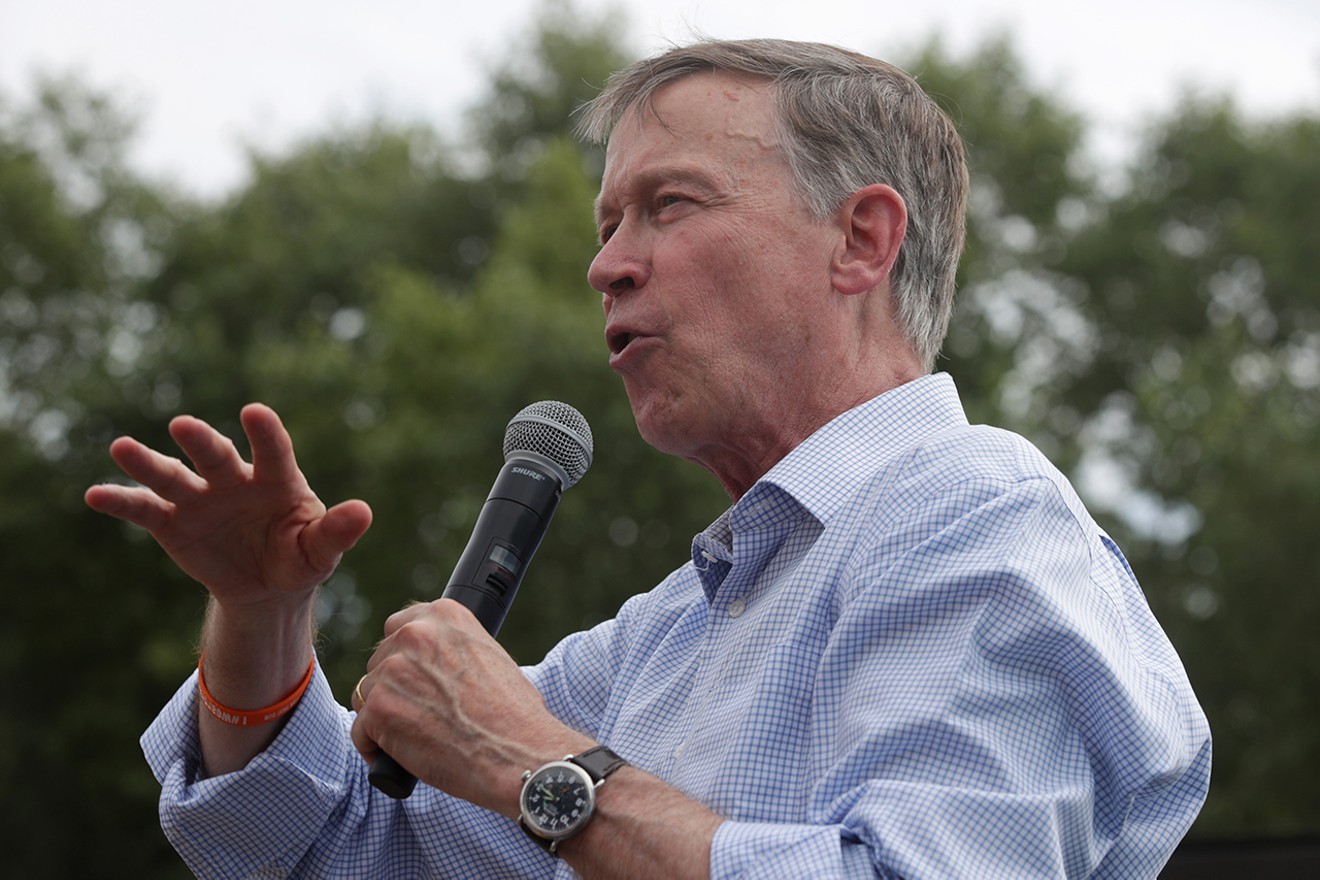 John Hickenlooper didn't initially support marijuana legalization, but has since changed his stance. Getty Images
The unthinkable just happened: Not one, but two politicians admitted they were wrong.

On October 11, Mayor Michael Hancock and former Colorado governor (and now U.S. Senator) John Hickenlooper attended a ten-year anniversary celebration of Amendment 64, the voter-approved initiative that legalized recreational marijuana in this state. Sharing the stage with proponents and authors of the country's first successful recreational marijuana legalization measure, both Hancock and Hickenlooper reflected on their previous attitudes regarding the plant.

"I'm a convert today. I was wrong ten years ago. We can do this right, and we can do this responsibly," Hancock said in front of a crowd of marijuana legalization supporters, industry insiders and government officials at the History Colorado Center.

When Sensible Colorado and Safer Alternative for Enjoyable Recreation (SAFER), two organizations that campaigned for Amendment 64, were pushing their message to voters in 2011, though, they didn't have an ally in Denver's new mayor. Nor did they have support from Hickenlooper, then in the governor's office.

At the time, Hickenlooper questioned the "societal wave" legalizing pot would have on the state, and worried that marijuana use among children would increase as a result. Marijuana use among children has remained flat since legalization, however, and both men have since admitted their fears were overstated. Hickenlooper told the crowd that he supports marijuana legalization at the federal level.

"This was such a better societal decision than the world I grew up in," Hickenlooper told the crowd, acknowledging that he smoked pot when he was sixteen. The country is "at a point now where I think it's time for the federal government to step up to the big-boy table and get this done," he added. 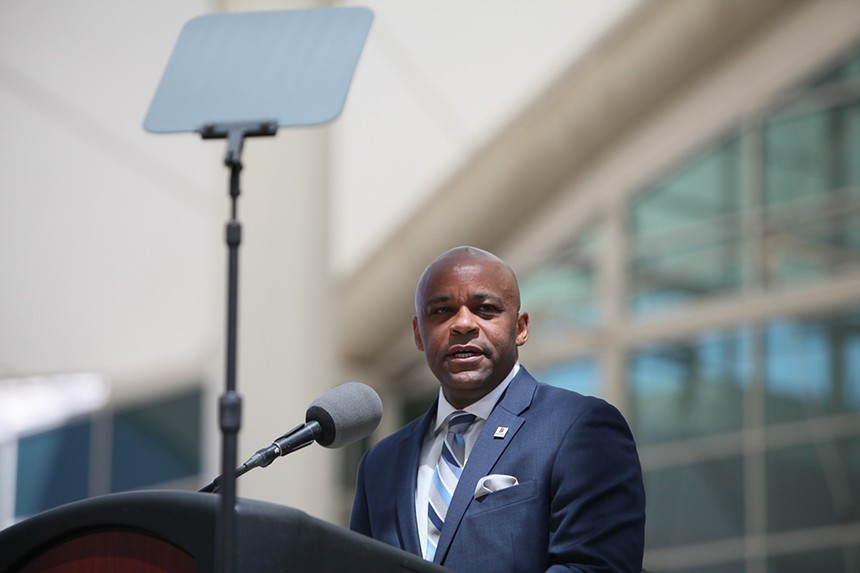 Michael Hancock has changed his position on pot, too.
Brandon Marshall
Hancock, who is now the chair of a cannabis caucus for the U.S. Conference of Mayors, noted that family members have dealt with drug addiction, and said he initially opposed marijuana legalization over fears of increased youth use and drug addiction.

"I wanted to box Mason Tvert," Hancock jokingly told the crowd, recalling his conversations with SAFER founder and Amendment 64 advocate Mason Tvert, who helped organize the celebration. Labeled the "godfather of the regulated cannabis movement" by Jared Polis, Colorado's current governor, Tvert successfully organized decriminalization measures at Colorado college campuses and in the city of Denver before pushing Amendment 64. He's now a partner with cannabis consulting firm and event host VS Strategies.

Although Hancock and Hickenlooper opposed marijuana legalization, advocates praised them for following the will of the voters after Amendment 64 passed on November 6, 2012, and implementing programs to regulate recreational marijuana in the city and the state.

"Our efforts were always grounded in changing public opinion, because we felt if we could change the way people think about cannabis, then we could change cannabis policy. But if we get elected leaders to speak [positively] about it, then it goes a very long way," Tvert said.

Now Hancock and Hickenlooper are approaching marijuana legalization from social equity and safety standpoints. Since 2019, Hancock's administration has moved to clear old marijuana possession convictions in Denver and support programs helping marijuana business owners from communities impacted by the War on Drugs. Hickenlooper, who's co-sponsored a bill that would protect banks serving marijuana businesses, is pursuing federal funding to research how marijuana intoxication impacts driving.

But that's just the start. According to Hickenlooper, he and several other members of Congress want to create a "national task force" to prepare the federal government for marijuana legalization implementation across the country "so that when it happens, we're ready for it," he says.

Hickenlooper also expressed optimism that federal legalization could happen under President Joe Biden's administration, but added that the president is approaching it at his own speed. Biden, who is scheduled to visit Colorado today, October 12, recently issued mass pardons for thousands of federal marijuana possession convictions, and said his administration would review the plant's Schedule I status with the United States Drug Enforcement Administration.

Polis, who also spoke at the event, called federal legalization a matter of "if" and not "when." The governor will welcome Biden to Colorado two days after he and other state officials sent a public letter to Congress in support of federal banking protections for the marijuana industry; with any luck, he could be continuing that discussion with Biden today.
KEEP WESTWORD FREE... Since we started Westword, it has been defined as the free, independent voice of Denver, and we'd like to keep it that way. With local media under siege, it's more important than ever for us to rally support behind funding our local journalism. You can help by participating in our "I Support" program, allowing us to keep offering readers access to our incisive coverage of local news, food and culture with no paywalls.
Make a one-time donation today for as little as $1.