THC NFTs: Is Cannabis Ready for All That Internet Money? 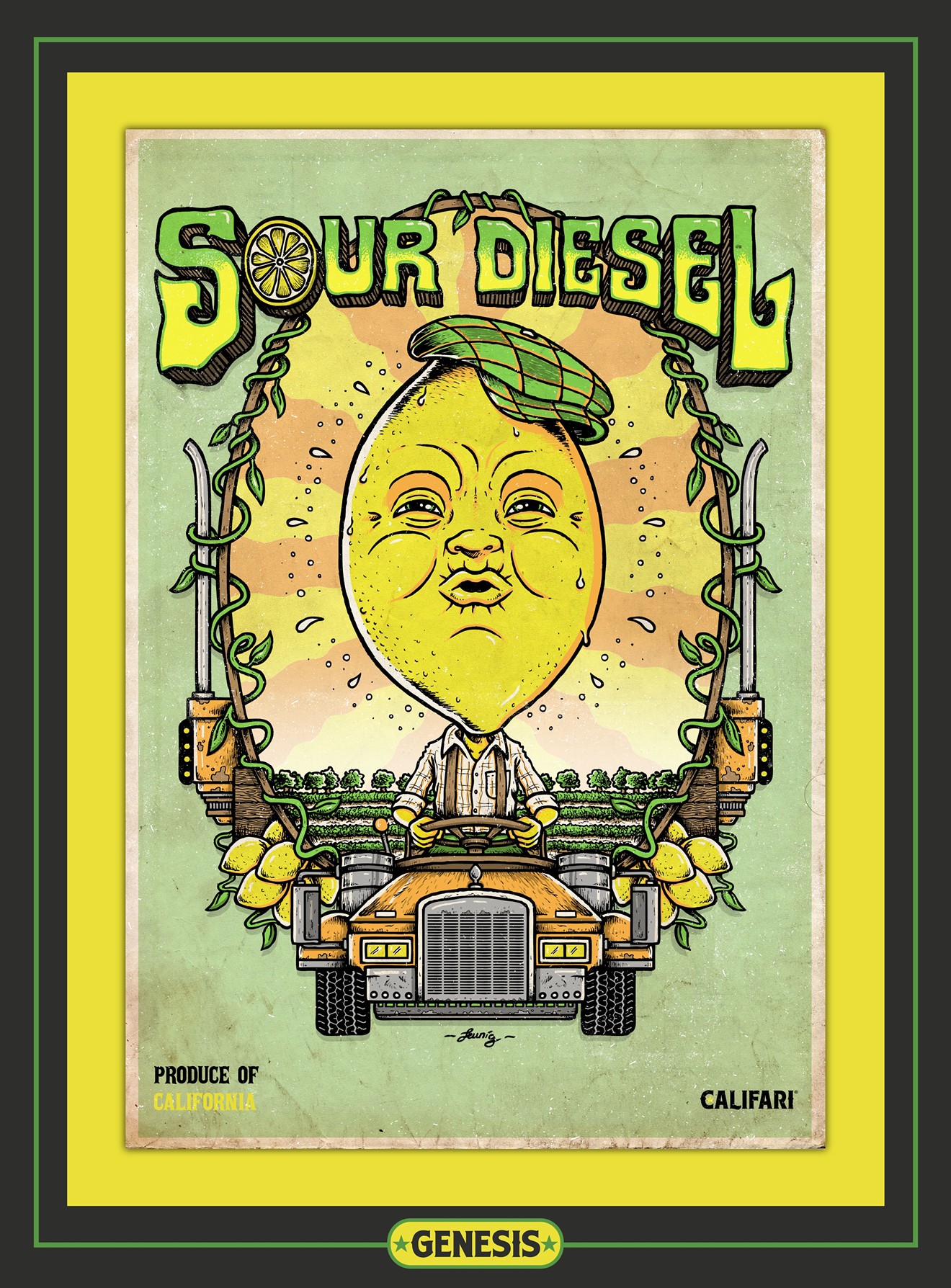 Califari works with artists to create non-fungible tokens for cannabis fans. Courtesy of Califari
The non-fungible token, or NFT, craze has been breaking the internet, with bidders vying for viral digital content ranging from "Leave Brittany Alone" to the original "Charlie Bit My Finger" video (RIP), which went for nearly a million dollars.

As the craze continues, more artists and entrepreneurs have been getting in on the act, including Jason McHugh, founder of Califari. A graduate of the University of Colorado Boulder, McHugh worked on a number of projects alongside Matt Stone and Trey Parker; it was McHugh's job to get the band Primus to compose the theme song for the pilot of South Park. In 2015, he launched Califari as a cannabis lifestyle brand, working with artists through the Global Artist Network to introduce pieces that pay homage to classic strains like Sour Diesel and Granddaddy Purple. On 4/20, the brand dropped its first five pieces as NFTs, with animated cards describing each strain's genetics, starting with a rendition of Northern Lights at $310.

We caught up with McHugh to talk about THC, NFTs and art.

Jason McHugh: The NFT craze is interesting, because it’s a different way to see and use art. It’s sort of given us a new way to do that. Now that we’ve dropped our first pieces and gotten into the NFT world, that’s the cool thing I’ve discovered about it. I [also] just got turned on last week to SuperWorld, which sells real estate from around the world, selling plots of land for people to store NFTs, which then become visible as augmented reality to people who are in those places using this particular app.

Yeah, it’s really far out. I just got turned on to it last week, and it’s definitely an exploding space.

What exactly is an NFT? Many people are asking.

They’re non-fungible tokens, which means that an NFT is a one-of-a-kind or unique piece that can be proven through the blockchain, and there are a lot of jokes about this, right? I’ve talked to a lot of artists about it, and I have one fine-artist friend who just does not give a fuck about NFTs. But then, on the other hand, some other artists see it as a new way to express themselves and display their work.

Why would someone want to invest in NFTs? What makes them so valuable despite no physical copy?

It’s like having the original receipt for something. And that’s sort of where the cynical side of it comes from: You don’t actually own the Mona Lisa, but you have a receipt that says you own it. In the fine-art world, there’s a thing called provenance — proof of ownership — so if you bought the Mona Lisa, there was a list of wealthy aristocrats who owned these fine-art pieces, and they keep a list of what that piece sells at each time, and each time it sells, the value appreciates. That is essentially what the blockchain and NFTs do for digital art, which is the most easily reproduced type of art there is now.

How did this all come together for Califari?

We got a call from our friends at Merida Capital [a cannabis venture capital firm]. They were just extremely fired up about working with us in the NFT space, so together we launched a new joint venture called Token Hits Chateau (THC), and that is our new company to create NFTs. They called in February, and we set the date for a 4/20 release and just jumped right in.

How did you get the idea for art that depicts cannabis strains?

I worked on the Primus & the Chocolate Factory tour before launching Califari. During shows, they'd offer an original poster every night. And they’d always sell out, and there were these long lines for these posters that were incredible and usually screen-printed that made an impression on me as we were launching Califari. I thought there should be that kind of art existing for cannabis strains, because I find that people have similar emotional connections for their favorite cannabis strains as they do for their favorite musical artists. So we kind of tapped some shoulders and launched that art line in 2016. We’ve found that art can create an emotional connection for people between their favorite strains, and so we’ve just kept going down this path. And now we’re on a mission to explore the personality of cannabis through art. It’s also our belief that there’s no one type of cannabis lover; it’s a diverse world of people who love all aspects of cannabis, and so we’re trying to get as many artist viewpoints as possible. It’s kind of been my job to follow the trending strains and pair them with the artist who best realizes that particular name and what kind of imagery it might conjure up.

A portion of sales goes toward the Last Prisoner Project. Why choose this nonprofit?

For everybody who's been working and profiting off the legal cannabis industry, to me, it’s just one of the most important nonprofits that are fighting to free nonviolent cannabis prisoners, which there way too many of. About 60 percent of the population believes in the legalization of cannabis, and there are still people sitting in jail over it. When you study prohibition, you see that the rules of prohibition were put in place to prop up a racist agenda to attack Black and Brown people. That has continued up to the present. And we feel strongly that the Last Prisoner Project needs as much support as it can get.

What’s up for the future?

We want to keep exploring the NFT world and see where it takes us. A bigger goal is to create an additional cannabis breeding machine. For Califari, we want to be an international cannabis brand, and we’ve already started that with our art and our cannabis line; we hope to someday expand to other places. We plan on introducing a new [NFT] piece each week throughout the summer before regrouping to figure out our next wave of NFTs to introduce.

Califari NFTs are available online through Bitski and OpenSea.
KEEP WESTWORD FREE... Since we started Westword, it has been defined as the free, independent voice of Denver, and we'd like to keep it that way. With local media under siege, it's more important than ever for us to rally support behind funding our local journalism. You can help by participating in our "I Support" program, allowing us to keep offering readers access to our incisive coverage of local news, food and culture with no paywalls.
Make a one-time donation today for as little as $1.