The creation of a state Hemp Center of Excellence by the Colorado Department of Agriculture (CDA) was stipulated in a bill introduced in 2018 by Senator Don Coram of Montrose, a hemp grower himself; the idea was to help direct U.S. Department of Agriculture-approved research, outreach and educational efforts for the state's hemp industry. But when the contract for the Hemp Center's initial management was awarded not to a hemp entity, but to the Marijuana Policy Group — a firm that specializes in THC-related work — several influential industry members and trade-organization reps, most of whom are ardent supporters of Polis's political career, called foul.

In a July letter protesting the selection of the MPG, more than 100 hemp industry members and organizations, including Coram, voiced their concerns related to "potential government ethics violations, conflicts of interest and/or criminal behavior in regard to the contract awarded to Marijuana Policy Group for the Hemp Center of Excellence."

The letter alleged that Ean Seeb, the governor's marijuana policy advisor, who was on the CDA's selection committee for the Hemp Center contract, had a conflict of interest regarding MPG director Adam Orens, and that the two had a professional relationship dating back to Seeb's time in the private sector of legal marijuana, when Seeb's marijuana consulting firm had hired Orens as an advisor. Although Seeb notified the CDA of his relationship with Orens before the contract was awarded, he was allowed to remain on the selection committee.

"Mr. Seeb’s disclosure of his previous business dealings and his agreement to the CDA’s Non-Conflict of Interest form does not waive the duty to avoid perceived conflicts of interests," a state procurement appeals administrator wrote in a response to the BoCo Farms appeal, adding that the CDA "erred in determining that Mr. Seeb’s apparent conflict of interest was curable by disclosure."

The CDA declined to comment on the appeal. In response to Westword's inquiry about Seeb's position on the contract selection committee before and after he disclosed his relationship with Orens, Polis's administration issued the following statement:

We are aware of DPA’s decision and that CDA is reviewing it and will decide on a future process. To be clear, Mr. Seeb has no financial ties to Mr. Orens nor does he have any interest in Mr. Orens’ business. Mr. Seeb is an experienced professional who understands the real-world decisions that Colorado makes to ensure our state remains a leader in the hemp industry. Given his many years of experience and long history of working with the industry, it is expected that Mr. Seeb will know a variety of people working on marijuana and hemp matters throughout the country. As reflected in DPA’s decision, Mr. Seeb did the responsible thing and disclosed his past work with Mr. Orens.

The appeals administrator only granted one of 23 appeal issues, but that was enough to open up the Hemp Center contract for bidding again — this time without Seeb on the selection committee. Although all competing bidders, including the MPG, are allowed to again present their cases, the hemp industry members who signed July's letter still feel stonewalled.

NoCo Hemp Expo organizer Morris Beegle has hosted Polis as a keynote speaker at the annual hemp conference, and was slated to have the governor speak again in 2020 before the COVID-19 pandemic postponed the event. Since the MPG was awarded the Hemp Center contract, Beegle and several other industry members say they haven't been able to reach members of Polis's staff or CDA Commissioner Kate Greenberg. Now they worry that the Hemp Center contract, which pays in the low six figures, is the start of more policy takeovers.

"Hemp is falling under marijuana, it seems like," Beegle says. "The hemp industry operates completely different from the Marijuana Policy Group, Ean and the marijuana industry. The legislative side and stakeholder meetings have been separate."

Polis's relationship with Colorado's hemp industry has been friendly since his days in the U.S. House of Representatives, when the then-congressman advocated for hemp and marijuana legalization frequently on the House floor. Hemp businesses, trade groups and organizations were ardent supporters of his gubernatorial campaign, and Polis has made several public appearances at hemp events since his election to laud the state's hemp industry and regulations. 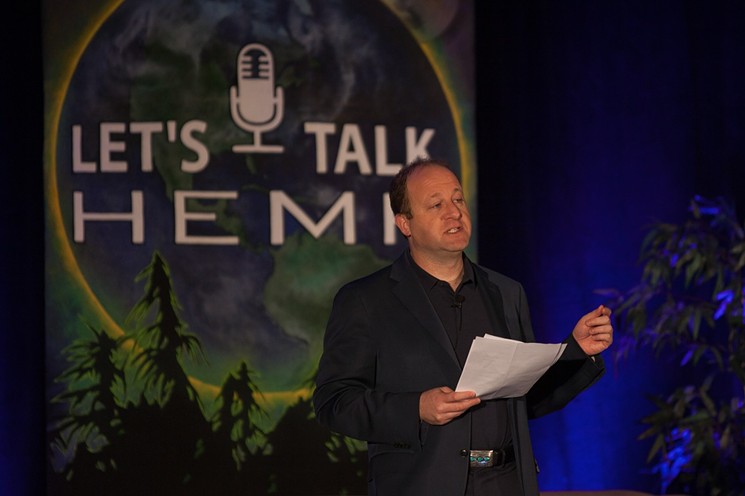 Colorado Governor Jared Polis speaks at the 2019 NoCo Hemp Expo in Denver.
Jacqueline Collins
Beegle says he still has hope for hemp's relationship with Polis and views Colorado as one of the more open-minded states in regard to hemp regulations, but is frustrated with "the lack of transparency" during the ongoing process.

Other hemp-industry members have more disdain for the Polis administration.

"We've always worked together with the CDA; that's why we've been so successful here with hemp all of these years, until the new administration came in," says Grow Hemp Colorado director Veronica Carpio. "They — and by 'they,' I mean the CDA and Polis — put out a lot of misleading statements about working with stakeholders and having a transparent process, including the CHAMP program."

Concerns over the MPG's inclusion were raised even before the Hemp Center contract was open for proposals, when the MPG was chosen to lead the Colorado Hemp Advancement and Management Plan (CHAMP) meetings, according to the hemp-industry letter sent to Polis and the CDA in July. The MPG was subsequently selected to create a summary report of CHAMP meetings, and hemp-industry members argue that that was an unfair advantage as proposals for the Hemp Center contract were being drawn, since the summary wasn't released until months later.

"It would've helped to learn about lines of hemp production and other state situations when applying," explains Sam Walsh, a hemp lobbyist working for the Robison Peyser law group, which also applied for the Hemp Center contract. "And then you have the same people in charge of putting out this report also winning the bid."

The Hemp Center contract is for early development planning, and Orens says that the MPG doesn't have any desire to continue managing the Hemp Center once the institution is up and running. However, he does see a place for marijuana policy people in the hemp space, despite the differing state laws and federal status of hemp and marijuana.

"Cannabis, in general, is marijuana and hemp, so hemp fits within that. As things evolve, you evolve with them. Our interest in hemp, as someone who has done work for a handful of state government agencies over the years, is to see it develop as an industry," he says. "The state's request for proposals laid out a number of different things they were looking for experience in, and hemp-related policy experience was one of them. I think they were also looking for experience in developing and setting up these institutions, and we have that."

"I've been in many of these bidding situations, and you lose more than you win. Often, those who make the most noise after these are the people who didn't win. It happens all the time, and the state has a process to go through it," Orens says.

Hemp attorney Frank Robison, who represents Robison Peyser, is ready to do more than make noise. Robison considers the reopening of the proposal process just "window dressing," and he's filed a lawsuit in Denver District Court protesting the CDA's selection of the MPG.

"We're not sure who the best candidates are, but based on what you can find on the most qualified contractor, [MPG] clearly shouldn't be the awardee," Robison says. "It's not sour grapes. I just want transparency. The [Colorado Freedom of Information Act] requests I've sent related to this were quoted at around $63,000. This is a poisoned well."

The second selection process for the Hemp Center contract is ongoing, according to the CDA.

Update: This article was updated October 14 to clarify that the Colorado Hemp Industries Association did not bid for the Hemp Center of Excellence contract as previously reported.
KEEP WESTWORD FREE... Since we started Westword, it has been defined as the free, independent voice of Denver, and we'd like to keep it that way. With local media under siege, it's more important than ever for us to rally support behind funding our local journalism. You can help by participating in our "I Support" program, allowing us to keep offering readers access to our incisive coverage of local news, food and culture with no paywalls.
Make a one-time donation today for as little as $1.