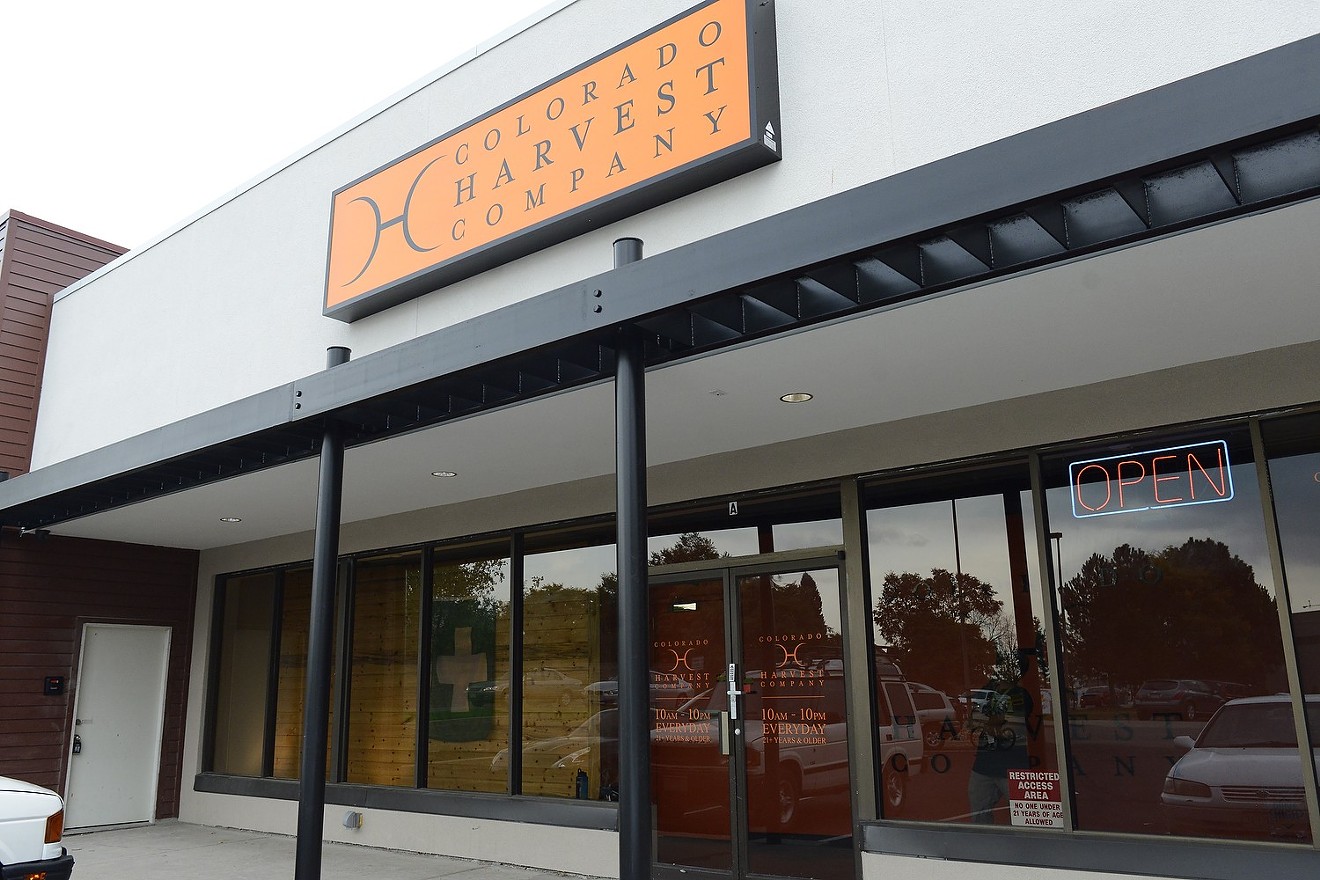 Colorado Harvest Company's location at 11002 East Yale Avenue in Aurora hopes to have delivery drivers on the road by March 1. Scott Lentz
An Aurora dispensary has received Colorado's first recreational marijuana delivery permit, but residents of the state's third-largest city will have to wait a few weeks until they can order weed to their doorsteps.

The state Marijuana Enforcement Division has been open for recreational delivery applications since January 1; it now lists High Country Supply LLC, operating as Aurora dispensary Colorado Harvest Company, as the lone permit holder. Colorado Harvest Company owner Tim Cullen confirms that his dispensary chain's Aurora location at 11002 East Yale Avenue received the permit, and says he may have a bigger announcement tomorrow, February 11, with a special guest that he can't yet name.

Cullen hopes to have delivery drivers on the road in Aurora by March 1, but the store still needs approval from the City of Aurora, which opted into recreational marijuana delivery in December with a provision requiring that all licenses be reserved for applicants who can prove that they or their families were negatively impacted by the War on Drugs, earn less than 50 percent of the state median income, or come from a community designated as a low-economic opportunity zone by the state Office of Economic Development and International Trade. However, the city's delivery ordinance also grandfathers in Aurora's 23 existing dispensaries, and Cullen is confident his application will be approved once submitted.

"It's all moving very quickly, so we bought a fleet of vehicles just this past Monday, and we're purchasing software to do routing this week," he explains. "This will be a whole new chapter for us."

Colorado Harvest Company is still in the process of outfitting delivery vehicles with GPS tracking, proper insurance, lockboxes and other security measures, as well as verifying drivers and meeting fundamental state requirements. After that, Cullen says, the company will submit its application to Aurora.

Aurora spokeswoman Julie Patterson confirms that city officials are anticipating Colorado Harvest Company's application. "No other businesses have submitted an application for delivery at this point, but it is our understanding that businesses are working on their applications and will submit when they are ready," she says.

The Colorado Legislature passed a bill in 2019 legalizing medical and recreational marijuana delivery, but allowed only for medical marijuana in 2020, with recreational coming online in 2021. Under that law, dispensaries with delivery permits can only service their local jurisdictions unless they receive approval from other municipalities that have opted into delivery.

Cullen says that Colorado Harvest Company will deliver to home addresses that are within a thirty-minute drive, adding that he thinks his drivers "can get all over Aurora in that time frame."

Cullen also owns two Colorado Harvest Company stores in Denver, where recreational delivery is expected to be voted on by Denver City Council in March. However, the proposed rules for Denver reserve all new marijuana business licenses, including delivery licenses, for social-equity applicants for the next six years. Cullen says he's already looking for a social-equity partner to run a delivery service for his Denver stores if and when the city comes online.

"Cannabis delivery is something that can be done safely and very well. Aurora will set the bar high, and Denver is going to have to get where that bar is. It's going to be successful in Aurora, Denver and the rest of Colorado," he predicts.
In a world still reeling from COVID-19, Cullen says that online pre-ordering went from a non-factor before the pandemic to currently accounting for half of his stores' orders; he's outfitted all of the locations with pick-up windows for to-go shopping. Adding a delivery option lines up with those retail trends, Cullen believes, as delivery enables even less human interaction and must be cashless — though that's easier said than done for marijuana businesses.

Because of the plant's federal prohibition, finding bank and payment-processing accounts is difficult for the marijuana industry, often resulting in almost all cash transactions at the retail level. But Cullen says there's a small list of lesser-known payment software platforms that will serve marijuana delivery businesses, and Colorado Harvest Company has partnered with Hypur, an electronic payment and banking platform similar to PayPal.

Under Aurora's new ordinance, only recreational delivery, not medical, will be permitted within city limits — to residential addresses for customers at least 21 years of age (with proof of ID). Deliveries will be allowed between 8 a.m. and 10 p.m., and will be subject to state purchasing limits of 1 ounce of flower, 8 grams of concentrate, or edibles containing 800 milligrams of THC.
KEEP WESTWORD FREE... Since we started Westword, it has been defined as the free, independent voice of Denver, and we'd like to keep it that way. With local media under siege, it's more important than ever for us to rally support behind funding our local journalism. You can help by participating in our "I Support" program, allowing us to keep offering readers access to our incisive coverage of local news, food and culture with no paywalls.
Make a one-time donation today for as little as $1.